Ukrainian officials said Tuesday that Russian forces had begun bombing and shelling the Azovstal factory in the besieged city of Mariupol, where Ukrainian forces and civilians remain encircled.

Petro Andriushchenko, an adviser to the mayor of Mariupol, said in a statement that Russian forces "are not only striking Azovstal with bombs but also with artillery and tanks, continuing their chaotic attacks on the residential area of the Left Bank (Livoberezhnyi) district along the line from the Meotidy Boulevard."

Andriushchenko is not in Mariupol but maintains a network of contacts in the city. CNN cannot independently confirm the location of Russian strikes, but pro-Kremlin media embedded with separatists and Russian forces have released footage of the shelling of Azovstal.

Liudmyla Denisova, the Ukrainian parliament's human-rights ombudsman, said that about 1,000 civilians, including children, remain in the basement of the plant, a figure consistent with estimates provided by Ukrainian units defending the plant.

Denisova claimed that Russian forces had ordered residents to wear white armbands — similar to those worn as friend-or-foe identifiers by Russian and separatist forces — when moving around Mariupol, making them harder to distinguish from combatants.

CNN could not verify that claim.

Mariupol has been under relentless bombardment for weeks, with more than 90% of the city's infrastructure damaged or destroyed, according to Ukrainian estimates.

Denmark will increase its natural gas production in the North Sea “for a limited time period,” to reduce its dependency on Russian energy, Danish Prime Minister Mette Frederiksen said Tuesday.

Denmark is ultimately aiming to phase out its use natural gases to become independent of Russian supplies, Frederiksen added.

“We are convinced it’s better to produce gas in the North Sea than buying it from Vladimir Putin,” she said.

Despite the “temporary increase,” Frederiksen assured that Denmark remained committed to plans to end its North Sea oil and gas production by 2050.

France has been attempting to persuade European partners to stop imports of Russian oil, Le Maire said, alleging that some countries were "hesitant" to do so.

Russian forces have regrouped and launched an offensive in the Donbas region in eastern Ukraine — a moment one Ukrainian lawmaker described as "the major battle" of the war.

Meanwhile, a Ukrainian official says control of Kreminna in the eastern Luhansk region has been "lost" in heavy fighting as Russia continues to bombard cities across the country.

The official said they could not release any more information "for security reasons."

Spain announced Monday it would be reopening its Kyiv embassy "in the coming days."

The embassy was shut with personnel evacuated to Warsaw in neighboring Poland soon after Russia's invasion of Ukraine in late February.

The reopening will be "a new sign of the commitment of the Spanish government and society to the Ukrainian people," Sánchez told Spanish TV Antena 3 on Monday.

Greek authorities have seized a Russian tanker off the southern coast of the Greek island of Evia, a spokesperson for the country's Ministry of Maritime Affairs and Insular Policy confirmed to CNN Tuesday.

Pegas, the crude oil tanker sailing under the Russian flag with 19 Russian crew members on board was seized near the town of Karystos on April 15 as part of the European Union's latest sanctions, the spokesperson said.

They added that the authorities seized the vessel but not its oil cargo, and the ministry could not provide further details at this point.

Some background: The EU's latest sanctions package announced earlier this month includes the closing of EU ports to Russian vessels. Exemptions were granted to vessels carrying energy, food and other humanitarian aid.

China says it will "continue to strengthen strategic coordination" with Russia, regardless of how the "international landscape may change," according to a statement released by China's Foreign Ministry on Tuesday.

China's Vice Foreign Minister Le Yucheng expressed this view to the Russian ambassador to China Andrey Denisov during a meeting on Monday, the ministry said.

"No matter how the international landscape may change, China will continue to strengthen strategic coordination with Russia to achieve win-win cooperation, jointly safeguard our common interests and promote the building of a new type of international relations and a community with a shared future for mankind," Le said, according to the statement.

Le cited a nearly 30% increase in trade between the two countries during the first quarter of the year, reaching around $38.2 billion, as a testament to the "tremendous resilience" of its bilateral cooperation.

The two sides also exchanged views on Ukraine, as well as other international and regional issues of concern. However, no further details were provided by the ministry.

Some context: In public statements and at international summits, Chinese officials have attempted to stake out a seemingly neutral position on the war in Ukraine, neither condemning Russian actions nor ruling out the possibility Beijing could act as a mediator in a push for peace.

Before the invasion, allies China and Russia proclaimed their relationship had "no limits."

But Beijing has since been quietly distancing itself from Russia's sanction-hit economy and has repeatedly denounced sanctions against Moscow as an ineffective way of resolving the crisis.

Residents in the Sumy region in northern Ukraine have been advised to attend Easter services virtually this weekend amid concerns about potential "provocations" by Russia.

"We urge people to stay at home for Easter holidays," said Dmytro Zhyvytskyi, the head of the Sumy regional military administration in northern Ukraine, adding that an online livestream of the church service would be organized.

"We already have a similar experience due to Covid-19, when people had to refrain from going to Church, so now we again urge people to stay at home that night for their own safety and not to give the enemy any opportunities for provocations," he said.

Many Ukrainians celebrate Easter according to the Julian calendar, with Easter Sunday falling this year on April 24. Zhyvytskyi said law enforcement would work extra shifts during Easter celebrations.

In the days after the retreat, authorities said more than 100 bodies had been discovered, some tortured.

Zhyvytskyi said on April 13 that the number of bodies was growing every day and there had been "a lot of people found dead with their hands tied with the signs of torture." He added at the time that others remained captive with "daily negotiations" for them to be exchanged or freed.

The fight for the Donbas region in eastern Ukraine will be "the major battle" of the war with Russia, Ukrainian lawmaker Kira Rudik told CNN Tuesday.

In a video address on Monday, Ukrainian President Volodymyr Zelensky said Russia had commenced the battle for Donbas and that Ukrainian forces will continue to fight against a Russian incursion in the region.

Rudik also echoed calls from Zelensky and other Ukrainian officials for military equipment to be sent to Ukraine to help repel Russian attacks.

In an interview with CNN last week, Zelensky said the weapons the US and other countries have provided to Ukraine to date, including the Biden administration’s new $800 million security assistance package, have helped his country resist Russia’s invasion.

But he said more would be needed, and that his country’s trainers would be able to get his forces up to speed quickly.

"This is a test for us — are we ready? Do we have enough weapons? Did all the weapons that we were promised arrive, or did they remain only promises?" Rudik said regarding the fight for Donbas.

"At some point(s), we are getting enough, at other points we are not getting anything," she added.

"Right now, rather than being upset with the ones who are not giving us what we asked (for), I would like to thank every single country that is supporting us and say: Give us more.

"You see how critical it is, you see that we are fighting not only for ourselves, but for the whole democratic world, for the whole of Europe."

"When you see what is going on in the Donbas, it is more necessary than ever to stop importing Russian oil," Le Maire told radio station Europe 1.

Le Maire went on to say that it was oil, not gas, that has been "the first source of currency for Putin’s regime for several years," and therefore "stopping Russian oil imports means hurting the financing of the war in Ukraine for those who are in power in Russia."

France was attempting to persuade European partners to stop imports of Russian oil, Le Maire added, alleging that some countries were "hesitant" to do so.

"The reason that we are not there yet isn’t because France does not wish it," Le Maire said. "It is because there are still certain European partners who are hesitant."

Speaking earlier this month to CNN, Le Maire said: "As France is concerned we stand ready to go further and to decide a ban on oil and I’m deeply convinced that the next steps and the next discussions will focus on this question of the ban on Russian oil."

Some background: Earlier this month, European leaders agreed to go after Russia's vast energy sector for the first time by banning all forms of Russian coal from the European Union. The European Commission predicted the move would affect about 8 billion euros ($8.7 billion) worth of Russian exports per year.

Ukrainian President Volodymyr Zelensky has reiterated his call for an oil embargo, saying on April 8: "How much longer can the Europe ignore the introduction of an embargo against oil supplies from Russia?"

The European Commission says that about 45% of the bloc's natural gas imports, and around 25% of its oil imports, come from Russia. The EU has imported about 35 billion euros ($38 billion) worth of Russian energy since the war began. 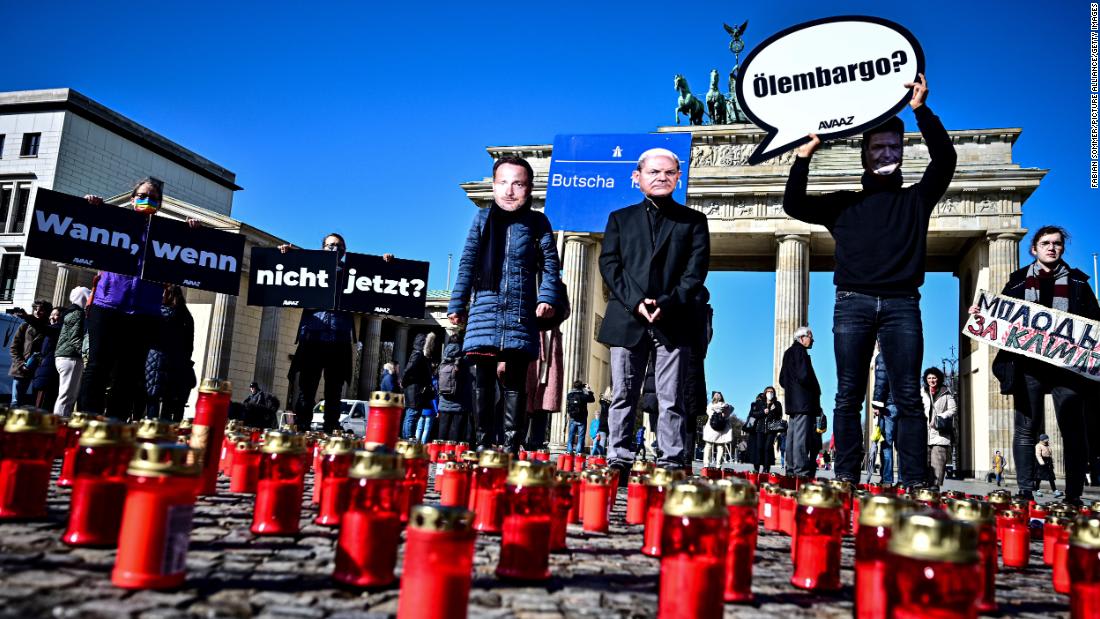 Europe turns its back on Russian coal. Is oil next?