New satellite images show Russian forces have withdrawn from the Antonov Airport in Hostomel, 18 miles (about 29 kilometers) northwest of the Ukrainian capital, Kyiv.

The images, taken Thursday by Maxar Technologies, confirm earlier information from an official with the US Department of Defense, who told CNN they believed the Russian military had likely left the airport.

Previous satellite images showed the Russians had constructed protective earthen berms around military vehicles and artillery positions after weeks of digging in at the airport. Now, just the berms remain.

First Russian victory: The capture of the Antonov airfield was the first major victory notched by the Russians on the first day of the war — Feb. 24. A number of transport and attack helicopters ambushed the base, and the Ukrainian soldiers stationed there; CNN witnessed some of the intense firefight at the base.

Since then, Ukrainian forces held strong against the Russian advance; they never made it closer to western Kyiv. Intense firefights took place along the Irpin River and the cities of Irpin and Bucha, just south of the air base and Hostomel.

Russia's Defense Ministry released a number of videos praising the ease at which they claimed to have taken the air base. Russian state media echoed those claims, even traveling with troops around the airport as evidence of how safe the area was.

Now, the abandonment is another example of Russia’s waning military success around the Ukrainian capital.

Russian repositioning: At this time, it's unclear where the military and artillery vehicles went. Russia has previously claimed it would decrease its military activity around Kyiv. All of the military forces and vehicles that were positioned west of Kyiv came from Belarus.

The Russians aren't saying if they returned to Belarus, and thick cloud cover is currently preventing any satellite imagery from tracking Russian troop movements in the area.

The update came via a statement, in which Vereshchuk noted the figure includes 1,431 people who moved from the southern cities of Berdiansk and Melitopol — in their own vehicles — to the Ukrainian-held city of Zaporizhzhia, via evacuation corridors.

Of that number, she said, 771 people originally came from the besieged city of Mariupol.

Meanwhile, said Vereshchuk, a separate convoy of 42 buses from the city of Berdiansk — carrying Mariupol residents — had passed a key Russian checkpoint and was en route to Zaporizhzhia. Including additional buses from Melitopol, those convoys were carrying more than 2,500 people.

Additionally, the official said 10 buses had arrived from Zaporizhzhia to Berdiansk delivering 80 tons of humanitarian aid.

"Tomorrow morning they will continue the evacuation of Mariupol residents," she added.

Russia accused Ukraine of mounting a helicopter attack on a fuel depot inside Russian territory Friday, as footage surfaced of the facility engulfed in flames.

In a statement, Russia's Ministry of Defense said that the helicopters "entered the airspace of the Russian Federation at extremely low altitude," at 5 a.m. Moscow time and "launched a missile attack on a civilian oil storage facility located on the outskirts of Belgorod."

As a result, "individual tanks were damaged and caught fire," spokesperson Maj. Gen. Igor Konashenkov said, adding that the depot "has nothing to do with Russian armed forces."

CNN could not verify the Russian claims.

The Ukrainian Ministry of Defense has neither confirmed nor denied the attack. Russia has hit fuel storage facilities around Ukraine in recent days.

"I would like to emphasize that Ukraine is performing a defensive operation against Russian aggression on the territory of Ukraine," Oleksandr Motuzyanyk, spokesman for Ukraine's defense ministry, said in a televised statement Friday.
"That doesn't mean Ukraine has to be responsible for every miscalculation or event or catastrophe that occurred on the territory of the Russian Federation. This is not the first time we are witnessing such accusations. Therefore, I will neither confirm nor deny this information."

CNN geolocated and verified social media videos showing two helicopters flying over the Russian city of Belgorod, near the Ukrainian border, but cannot confirm the helicopters are Ukrainian. 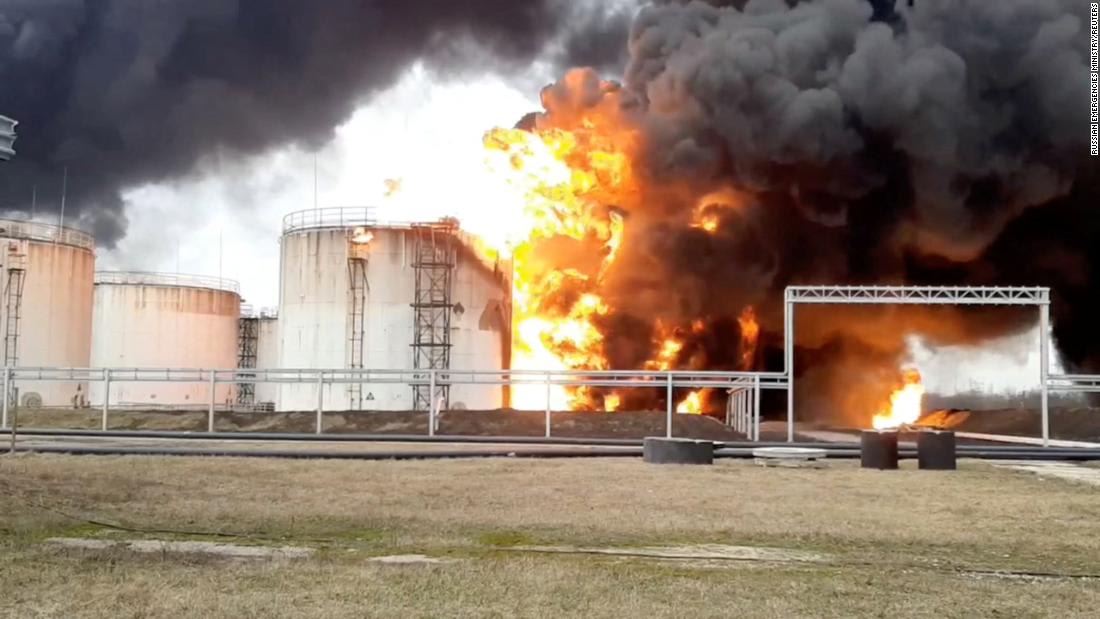 Vladimir Putin's deadline has come and gone and Russian natural gas is still flowing to Europe.

The Russian President delivered an ultimatum Thursday to "unfriendly" nations to pay for their energy in rubles starting April 1 or risk being cut off from vital supplies. Was that a bluff?

It's too early to say, but Kremlin spokesman Dmitry Peskov said Friday that Russia would not turn off gas supplies to Europe immediately.

Putin's high-stakes threat has sent shockwaves through Europe, which cannot keep its economy running for long without Russian energy. Moscow sent a clear signal that it could at some point reduce natural gas flows — perhaps to deter or respond to even tougher Western sanctions over the war in Ukraine.

Why does all this matter? Europe gets about 40% of its natural gas from Russia, carried on pipelines through Belarus, Ukraine, and Poland or under the Baltic Sea. Germany is the biggest buyer and its huge manufacturing industry guzzles the gas, and the power it generates, in vast quantities.

The German government this week activated the first of three stages of a crisis management plan that could ultimately result in energy rationing, and is appealing to the public to use as little as possible.

Any significant loss of Russian supply would likely tip Europe's biggest economy into recession — and potentially the wider region too. Soaring gas prices are already making energy-intensive industries unprofitable and causing pain for many households. Survey data published Friday showed German manufacturing at its lowest ebb in 18 months. The picture isn't much brighter elsewhere in Europe.

What does Russia want? Most of Russia's gas export contracts are currently priced in euros or US dollars. According to the decree signed by Putin on Thursday, foreign buyers must open accounts at a Russian state-controlled bank, instead of dealing directly with state gas giant Gazprom. They would deposit euros into one account. The bank would sell the euros for rubles and transfer those into another account in the buyer's name to be used to pay for gas.

Moscow may be trying to bolster demand for the ruble — which has recovered after crashing in the immediate aftermath of the invasion and ensuing sanctions. But the Kremlin had already forced Gazprom (and other big Russian exporters) to convert 80% of their foreign currency revenues into rubles, so any gain would be limited. 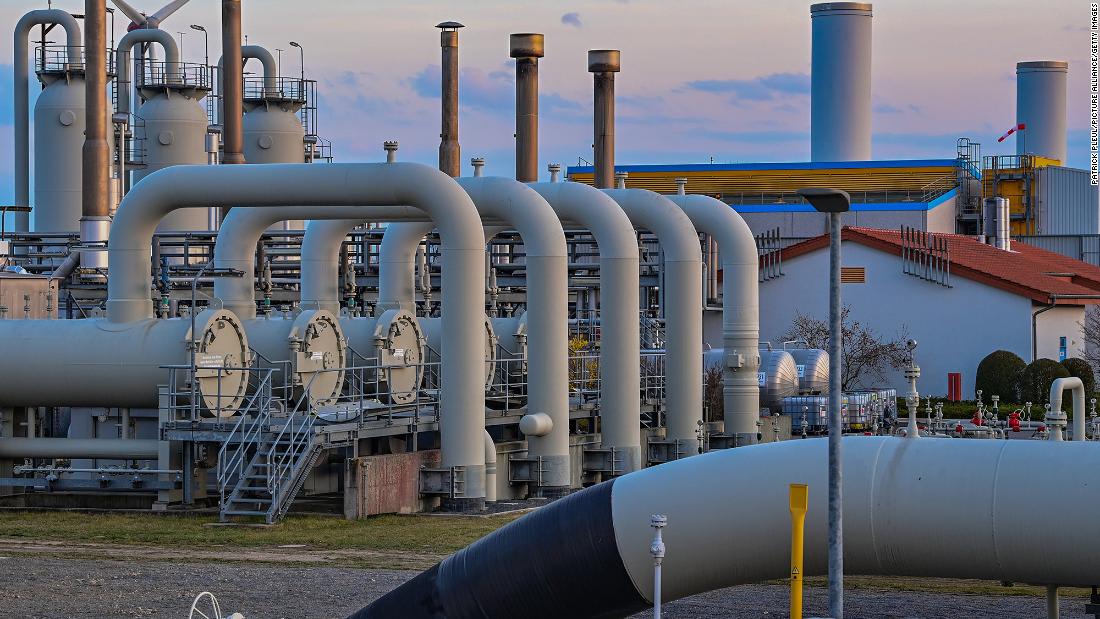 After authorities encountered several issues in evacuating civilians from Mariupol, they were finally put on buses in the city of Berdyansk and headed to the Ukrainian government-held city of Zaporizhzhia on Friday, according to the Mariupol city council. And moments ago, the buses started arriving at the destination.

CNN's Ivan Watson, who is on the ground, said officials are vetting people and their documents before letting them off the buses.

"Then there's an entire system of volunteers, city government officials, aid workers who will greet people. Almost everybody I've spoken to says their home has been destroyed in Mariupol," Watson said.

Some men said they were asked to remove their shirts at Russian military checkpoints, and they were checked for tattoos that the Russian forces could believe would help identify if they were part of Ukrainian military, Watson said.

A passenger on the bus said "an 18-year-old boy was seen with tattoos and was immediately hooded by the Russian troops and thrown into an armored personnel carrier and taken away," Watson reported.

"Not only have people here endured bombardment, siege, hiding in basements, seeing their homes destroyed, perhaps seeing neighbors hurt or killed, but then when they finally get to escape, they have to undergo interrogation and searches by the same military that destroyed their city and their homes in the first place," he added.

All of the vehicles arriving have been branded with the Red Cross logo to try to ensure they cannot be attacked on the road, Watson reported.

The organization had been at work, trying to assist with safe passage.

More than 100,000 residents remain trapped in the southern port city, according to officials.

Watch CNN's reporting on the ground: