The US is expected to help facilitate the transfer of Soviet-era tanks to Ukraine, according to a source familiar with the plan.

The tanks the US is transferring to Ukraine will be Soviet-era T-72 tanks, which Ukrainian military personnel have experience operating, a senior US official tells CNN.

The New York Times first reported on the transfer.

A total of 4,217 civilians evacuated through corridors in Ukraine on Saturday, according to the country's deputy prime minister, Iryna Vereshchuk.

In a statement on Telegram, Vereshchuk said 1,263 people from the besieged city of Mariupol and the Russian-held city of Berdiansk reached the Ukrainian government-held city of Zaporizhzhia using their own vehicles.

An evacuation convoy of 10 buses from the city of Berdiansk with more than 300 Mariupol residents also passed Vasylivka en route to Zaporizhzhia, she said.

Vereshchuk said 17 buses reached the city of Berdiansk from Zaporizhzhia and were expected Sunday morning to continue the evacuation of Mariupol residents. Some of the buses will try to reach closer to Mariupol, she added.

Mariupol, which is ringed by Russian checkpoints, has been under weeks of intense bombardment. Ukrainian officials have described the situation there for the remaining residents as a major humanitarian emergency.

The International Committee for the Red Cross team that departed Zaporizhzhia on Saturday morning as part of renewed attempt to reach Mariupol, have yet to reach the besieged city, an ICRC spokesperson told CNN.

The team is "spending the night en route to Mariupol and are yet to reach the city," the ICRC spokesperson said.

On Friday evening, the ICRC announced in a statement that its team of three vehicles and nine personnel was unable to reach the city "after arrangements and conditions made it impossible to proceed."

Residents of Odesa are trying to find pockets of normalcy as the threat of a Russian attack from the Black Sea looms over the southern Ukrainian city.

"It's home. And we can, like, live a normal life. But that's for now. We don't know what's going to be tomorrow or in a week," law student Taimur Kravchenko told CNN's Ed Lavandera while enjoying coffee with his friends at a market.

But the center of the city is full of anti-tank barricades to fortify itself against an invasion, and displaced Ukrainians from areas that have seen the worst fighting have escaped to the city to find food and shelter.

Olga Petkovich, her husband and their six children fled their village through a forest to escape shelling. Russian soldiers broke into their home and took everything, according to her husband.

"When we came here, the volunteers told us say what we need, but I'm ashamed. I've worked all my life and never asked anyone for anything. Now I have to ask," she said, tears welling up in her eyes.

Her young daughter wiped away her tears and asked "Mother, why are you crying?"

"Because they were shelling us a lot," Petkovich responded. 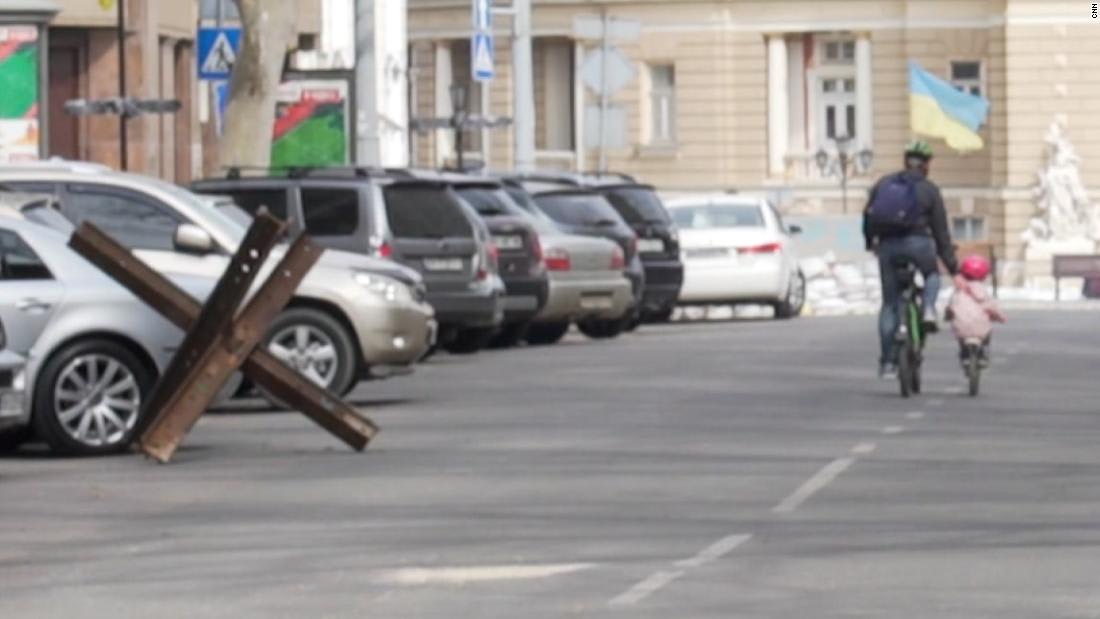 CNN reporter: A poignant moment in the midst of a surreal world - CNN Video

Russian gas continues to flow into Germany despite Germany's refusal to adhere to a decree from Russian President Vladimir Putin requiring payments for gas contracts to be made in rubles.

The German government is "in close contact" with its European partners and will "monitor the situation closely," the spokesperson added.

German transmission system operator Gascade, which manages the German section of the Yamal-Europe pipeline, told CNN Saturday that it couldn't confirm any cutting off of gas supplies to Germany.

The Russian president delivered an ultimatum Thursday to "unfriendly" nations to pay for their energy in rubles starting Friday or risk being cut off from vital supplies. But German Chancellor Olaf Scholz insisted that German companies will continue to make payments for Russian gas only in euros.

The head of the regional military administration of Ukraine's central Dnipropetrovsk region said Russian strikes had interrupted rail traffic and caused a fire.

"One rocket hit the railway," he said. "Tracks and electric lines are badly damaged. Train wagons exploded. Train traffic is suspended. Rescuers are putting out the fire."

Reznichenko said no one was killed, according to preliminary information, but a second round hit an open area, causing a fire. One person was injured, he said.

The office of Ukraine's Prosecutor General said a criminal investigation has been opened into the attack.

"According to the investigation, on the afternoon of April 2, 2022, the Armed Forces of the Russian Federation, ignoring the norms of international humanitarian law, carried out a rocket attack on a civilian transport railway hub and an open area of the city of Pavlohrad," according to a statement on Telegram from the office. "As a result of the airstrike of the Russian invaders, guided missiles damaged railway tracks and freight cars."

Kim said his secretary was among the dead.

Watch footage of the strike here: 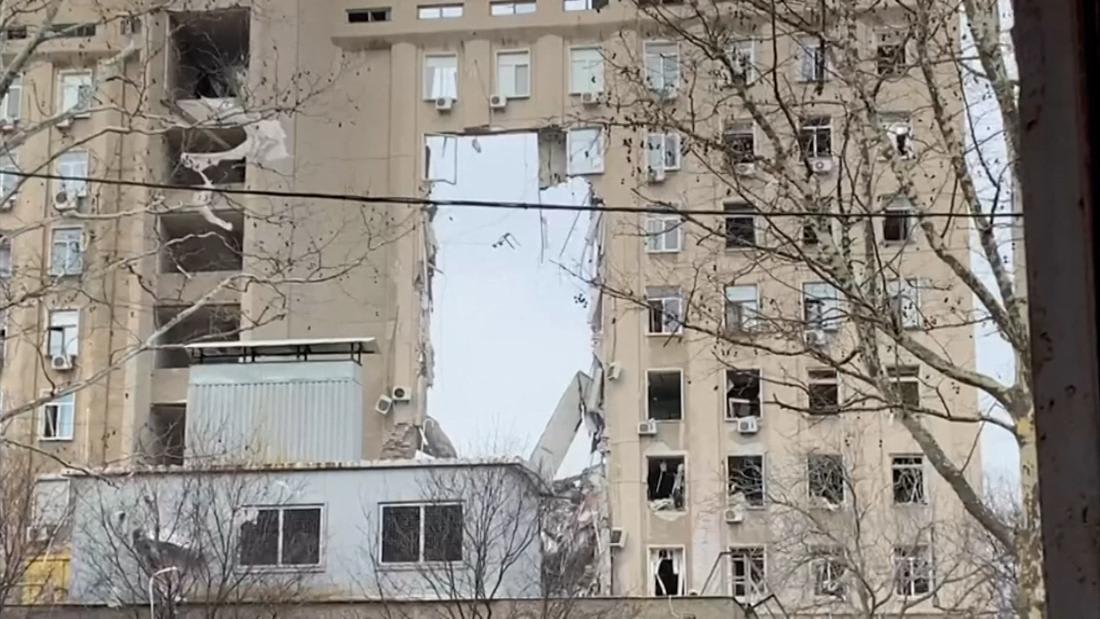 As the sun sets on Saturday in Ukraine, here's what you need to know.

Evacuation efforts continue: Seven evacuation corridors were scheduled in Ukraine on Saturday, according to Ukrainian Deputy Prime Minister Iryna Vereshchuk, including the route from the besieged southern port city of Mariupol to the Ukrainian government-held city of Zaporizhzhia. In addition, an International Committee of the Red Cross team left for Mariupol on Saturday.

Turkey has also offered to evacuate people trapped in Mariupol.

More than 6,200 people were evacuated from Ukrainian cities on Friday, Vereshchuk said.

Attacks reported in eastern and central Ukraine: Russian forces targeted a major Ukrainian oil refinery in the central Ukrainian city of Kremenchuk in a series of strikes Saturday morning, according to a spokesperson for the country's military.

At least four people were injured by explosions amid protests against Russian occupation in the central Ukrainian town of Enerhodar, the country's state nuclear power company Energoatom said.

Additionally, a Luhansk regional official said Russian forces had shelled people evacuating from towns that have seen heavy fighting. And the head of the regional military administration of Ukraine's central Dnipropetrovsk region said Russian strikes had interrupted rail traffic and caused a fire. 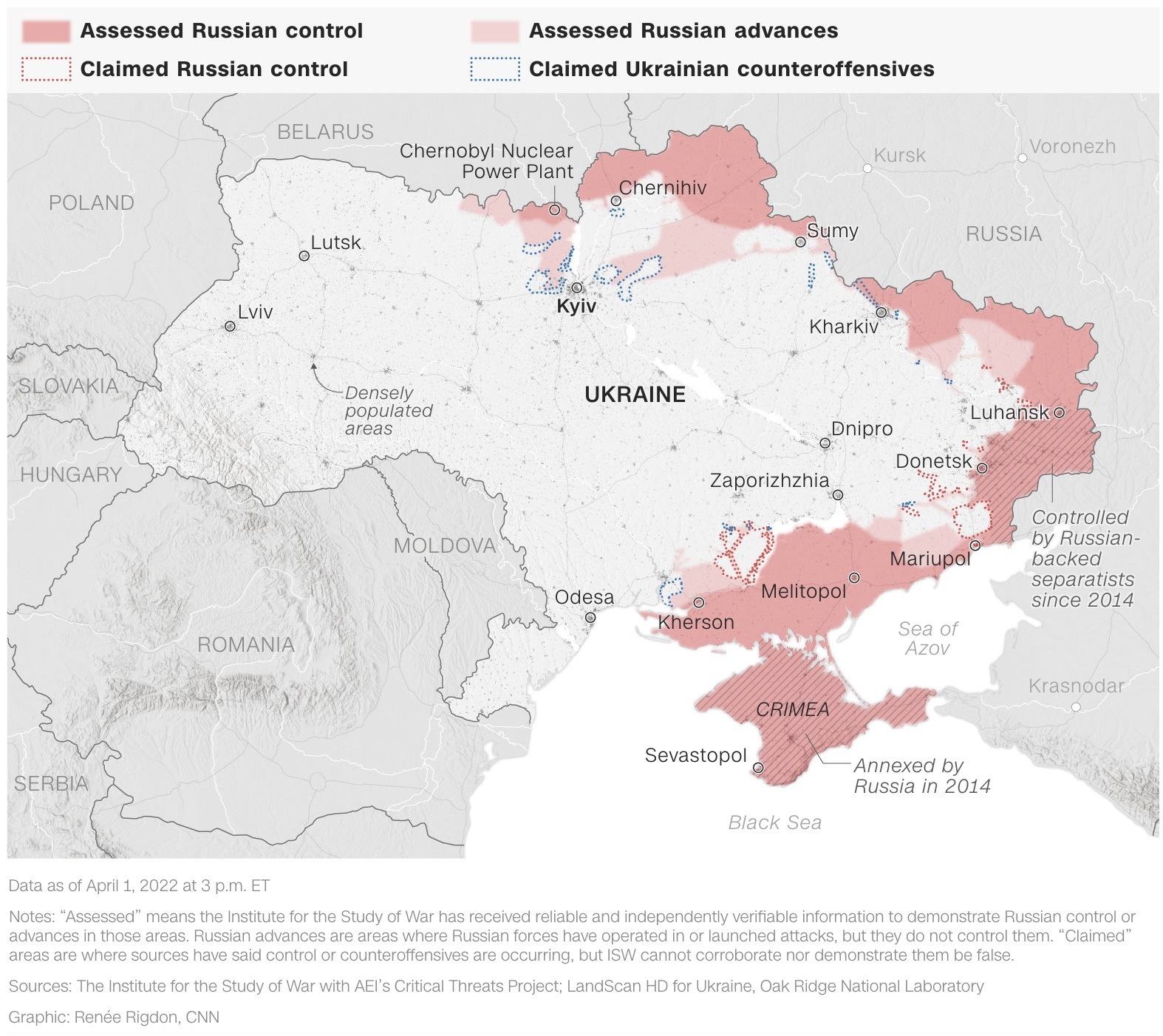 Meanwhile, Ukrainian presidential adviser Mykhailo Podolyak on Saturday called on the US and its allies to deliver heavier weaponry to Ukraine as the Russian military shifts its campaign to focus on the east and south of Ukraine.

Photojournalist found dead: Ukrainian photojournalist Maksym "Maks" Levin, who worked for a number of major Western news outlets including Reuters and the BBC, was found dead with two gunshot wounds near Kyiv, the office of Ukraine’s attorney general said Saturday.

Ukrainian presidential adviser Oleksiy Arestovych said heavy fighting is still expected in the east of Ukraine, near Mariupol, and in the country's south.

He warned that the military effort "will not be easy" in those regions.

"I think we will take back Mariupol, eastern Ukraine, and the south," he said. "But — listen carefully — it will not be easy there."

Arestovych and other senior Ukrainian officials have stepped up calls in recent days for the US and its allies to deliver more heavy weaponry. Speaking during his daily briefing, Arestovych said the main directions of the military over the past day were the Kyiv region, where Ukrainian troops reclaimed more than 30 settlements from Russian control.

"We seize a lot of equipment that is empty, without fuel, and transfer it to the Armed Forces of Ukraine," he said. "That is, the offensive is going well."

Arestovych — who gives regular briefings on Ukrainian television — also urged people to return to normal life, saying, "In those areas that are liberated from the enemy, that do not pose an immediate threat, and even more so in the cities of Central and Western Ukraine or in the East and Center of Ukraine, where there is no immediate threat, economic recovery is critical to restoring normal social and political life, even psychological life."