Ukrainian President Volodymyr Zelensky said Thursday that "thousands" of civilians remain blockaded inside Mariupol as he likened the Russian siege of the southeastern port city to a "terrorist operation."

Ukrainian commanders on the ground have said Russian forces have not honored agreements to open evacuation corridors or enforce ceasefires and have continued to bombard the city.

Mariupol has been nearly completely destroyed by weeks of Russian bombardment. Tens of thousands of civilians still await evacuation, according to Ukrainian officials.

After numerous failed attempts to establish safe corridors out of Mariupol, four evacuation buses managed to leave the city on Wednesday.

In an interview with French television channel BFMTV, Zelensky said:

"As to our army, the forces of the Russian Federation do not allow us to pass through these occupied 120 kilometers so that we could reach the military unblocking of Mariupol today.
It's true. We can't do it today. We negotiate and open humanitarian corridors, and some people are leaving. But the thousands I told you about are blocked there, and so far Russia isn't allowing these people to get out from captivity."

Russian President Vladimir Putin on Thursday proclaimed the effort by Russian forces to capture the besieged Ukrainian city of Mariupol a "success," but ordered Russian forces to stop short of trying to storm the city's besieged Azovstal steel factory, which is still held by Ukrainian forces.

Local residents, children, the elderly and the military are blocked in the city of Mariupol. It is not more like a war, but a terrorist operation by Russia against Mariupol and the people of this city."

A Russian crude oil tanker seized last week by Greek authorities will be released, a government spokesperson confirmed to CNN on Thursday.

Greece impounded the tanker with 19 Russian crew members on board on April 15th as part of the EU sanctions.

According to the Athens News Agency, the tanker was headed to the Peloponnese peninsula due to an engine problem. There, it planned to offload its cargo on to another vessel.

However adverse weather conditions led it to anchor near the southern coast of the Greek island of Evia, where the tanker was seized.

The Prime Ministers of Spain and Denmark arrived in Kyiv on Thursday to meet with Ukrainian President Volodymyr Zelensky, their respective offices said.

“Ukraine has the support, solidarity and commitment of Spain,” the post said.

Frederiksen’s office tweeted that she and Sanchez would “meet with President Zelensky to deliver concrete support to Ukraine.”

“Tthey will meet to discuss the current situation in Ukraine, further support for the Ukrainians and the prosecution of war crimes and human rights violations in connection with the Russian invasion,” Frederiksen’s office said in a statement.

Sanchez announced earlier this week that Spain would reopen its embassy in Kyiv in the coming days, which it had closed shortly after Russia’s invasion of Ukraine in late February.

Russian President Vladimir Putin has on Thursday scrapped plans to storm the Azovstal steel plant in the Ukrainian port city of Mariupol.

Instead, he told his Defense Minister Sergei Shoigu that the plant — a sprawling complex which is among the last significant holdouts for Ukrainian forces in Mariupol -- should be sealed and those inside should once again be offered the chance to surrender in exchange for their lives and a “dignified treatment.”

“There’s no point in just ratcheting out and going in for each individual person in that very labyrinth complex … There’s no reason to do that.
All they have to do is just keep that last piece cordoned off and virtually the city is already theirs.”

“Even though the Russians don’t go after them [the Ukrainian troops inside the plant], because they have them surrounded, they can’t get even food or water, much less ammunition,” Davis added.

“The risk to those soldiers is that they would slowly die if they don’t get some help. I think in probably the coming hours or days you’re going to hear that those troops are finally negotiated out.”

Putin declared on Thursday that Mariupol had been “liberated,” but Shoigu said Russian forces would need three to four days to take over the Azovstal plant. Ukrainian officials have denied that the southeastern city has fallen to Russia.

Ukraine's second largest city of Kharkiv was under heavy shelling overnight, its mayor said on Thursday.

"The situation is stressful, because overnight there was very massive shelling," said Ihor Terekhov. "Two markets have been destroyed, firefighters are extinguishing fires there now. There was a direct hit in another residential building."

Terekhov said that those left homeless by Russian bombardment have been moved to kindergartens, schools and boarding schools, adding that the situation was "tense but under control."

There are no evacuation planned, he said.

According to Terekhov, around a million people remain in Kharkiv today. He said that about 30% of the pre-war population had left, primarily elderly people and women with children.

I am talking to people, they are not going to leave the city. And we do not consider it necessary to leave it today."

Phase two of Russia's invasion of Ukraine -- an offensive in the eastern Donbas region -- is underway. The question is whether it will be any more successful and competent than phase one, and whether Ukraine will have enough troops and weapons to impede or even block it.

Russian Foreign Minister Sergey Lavrov said Tuesday that the operation in the Donbas is "a very important moment of this entire special operation."

The Russian goal is clear and publicly stated: to secure all of Ukraine's eastern regions of Donetsk and Luhansk -- parts of which Russian-backed separatists have controlled since 2014. A second aim is to crush the remaining resistance in the port city of Mariupol to consolidate a land bridge linking the Russian region of Rostov with Crimea, which Russia seized from Ukraine eight years ago.

To those ends, Russian forces that were deployed to the north and east of Kyiv have been redeployed and in some cases reconstituted after suffering heavy losses. 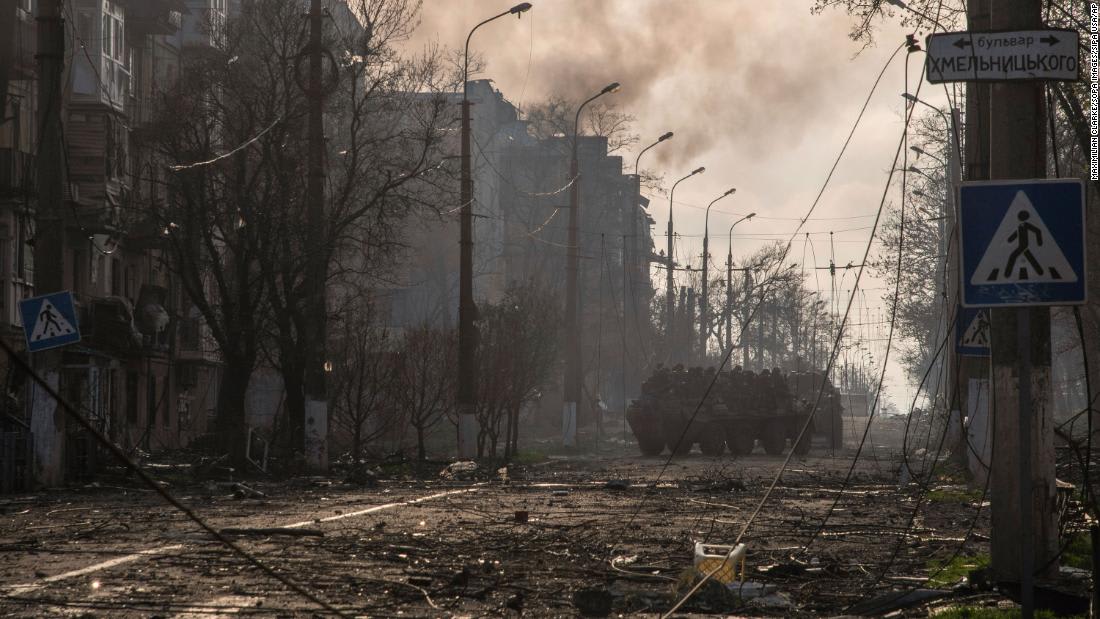 A top Ukrainian official said Thursday that the war in Ukraine "can end in direct talks" between Ukrainian President Volodymyr Zelensky and Russian President Vladimir Putin.

Mykhailo Podolyak, adviser to the Head of the Office of President of Ukraine, said that while talks were possible, he was waiting to assess how Russia's military offensive in the east of the country progresses in the coming days

This is what the team of lawyers, consultants and the negotiating group from the Ukrainian side are working on today," he said. "Accordingly, we hope that the positions of President Volodymyr Zelensky will be extremely strong in these talks."

Russia has shifted forces to Ukraine's eastern Donbas region in what both Kyiv and Moscow have described as a major battle for control of eastern Ukraine.

They have enough resources, enough missiles, they unfortunately continue to bomb our cities. They still have manpower and equipment that they do not mind having destroyed in our fields. Therefore let's wait for a while, and then we will be able to judge the positions of the parties, first of all of the President of Ukraine, at future bilateral meetings."

Podolyak added that he believed it would become more clear how the situation may develop in the next week or week and a half.

Putin has declared that Russian forces have “liberated” Mariupol, but the situation in the besieged port city remains confusing as Ukrainian officials have denied that the city has fallen to Russia.

As the barrage of Mariupol continues, the Azovstal steel plant has become one of the last significant holdouts of Ukrainian forces.

The sprawling industrial complex is sheltering hundreds of soldiers and civilians.

"They spent the night in Berdiansk and are now heading to Vasylivka," Vereshchuk said in a statement on Telegram.

However, officials say tens of thousands of civilians remain trapped in Mariupol.

The co-commander of one of the Ukrainian units encircled in the port said the city remains under heavy bombardment.

Maksym Zhorin, co-commander of Ukraine's Azov regiment, said in televised remarks that Russian forces "have not stopped shelling areas of Mariupol" amid negotiations on so-called "green corridors" for evacuation from the city, limiting the number of people who can be evacuated.

Call for weapons for Ukraine: The vast majority of the southern city has been either destroyed or badly damaged. Photos and drone footage show there is hardly a street left untouched by the war, while the relentless bombing has made it uninhabitable.

He outlined two potential ways to end the standoff in the city: “First, it involves serious and heavy weapons […] at the moment we don't have enough of these weapons to free Mariupol. The second path is diplomatic. So far Russia hasn't agreed to this.”

“We don’t know when we can unblock Mariupol. And I say this openly, that all the boys in Mariupol want our victory, they want a free city, none of them are going to surrender to the enemy. This is their internal feeling, this is what they are,” he added, speaking alongside European Council President Charles Michel in Kyiv."

Zelensky also said that the fate of the “few thousand” Ukrainian civilians who fled the besieged city of Mariupol through evacuation corridors to territories under Russian occupation is not currently known.

Two top Ukrainian officials said they are ready to head to Mariupol to negotiate the evacuation of soldiers and civilians, according to a captain with Ukraine's Azov Regiment.

Russian President Vladimir Putin proclaimed the effort by Russian forces to capture Mariupol a "success," but ordered Russian forces to halt outside the city's besieged Azovstal steel factory and blockade it "so that a fly can't get through."

In a meeting with Russian Defense Minister Sergei Shoigu, Putin said: "Completing the military task of liberating Mariupol is a great achievement, I congratulate you."

Ukrainian forces still hold the Azovstal plant in the southeastern port city and Shoigu told Putin that Russian forces would need three or four days to take over the factory.

Putin then said the Russian forces "must think ... about preserving the life and health of our soldiers and officers," adding:

There is no need to climb into these catacombs and crawl underground through these industrial facilities. Block off this industrial area so a fly cannot get through."

Putin said that Russia would offer the Ukrainian defenders still in the plant to lay down arms.

"The Russian side guarantees their lives and decent treatment in accordance with the relevant international legal acts," he said. "All those who are injured will receive qualified medical assistance."

Ukrainian commanders on the ground have said Russian forces have not honored agreements to open humanitarian corridors or enforce ceasefires and have continued to bombard the city.

The port city has been nearly completely destroyed by weeks of Russian bombardment, and tens of thousands of civilians still await evacuation, according to Ukrainian officials.

In a statement on Thursday, Ukrainian Deputy Prime Minister Iryna Vereshchuk urged the Russian side to open an evacuation corridor from Azovstal. "There are about 1,000 civilians and 500 wounded servicemen there now," she said.

"They all need to be evacuated out of Azovstal today! I call on world leaders and the international community to focus their efforts on Azovstal now. It is a key point and a key moment for the humanitarian efforts now!"