Our live coverage of Tropical Cyclone Fani has ended. Scroll through the posts below to read more about the storm or follow CNN.com.

In the video, taken and tweeted by Chinmaya Ku. Muduli, trees sway and bend under the force of roaring wind as heavy rain poured down.

The death toll caused by Cyclone Fani – the strongest tropical cyclone to hit India in 20 years — has risen to 7, according to Odisha Police Director General Sanjeeb Panda.

Panda adds the deaths happened across four districts in eastern Odisha state and were caused mostly by fallen trees and collapsed walls.

Cyclone Fani made landfall Friday near the city of Puri, in Odisha state, as the equivalent of a Category 4 hurricane, lashing the country's east coast. The storm is expected to weaken as it moves north-northeast in the coming hours toward Kolkata, one of India's most populous cities, and Bangladesh.

As Cyclone Fani moves north-northeast along India's east coast, Bangladesh is bracing itself for the storm, which has left two people dead in the Indian state of Odisha.

In Bangladesh, 400,000 people on the coast have been evacuated as of Friday afternoon, said Enamur Rahman, the State Minister for Disaster Management and Relief. Authorities aim to have 2.1 million evacuated by evening.

More than 4,000 cyclone shelters have been set up for evacuees, stocked with drinking water, dry food, and medicine. 56,000 officials have been deployed for evacuation and rescue operations.

Aid agencies are also concerned for hundreds of thousands of Rohingya refugees who fled ethnic violence in Myanmar and are living in refugee camps in Bangladesh near the coast.

UNHCR, the UN refugee agency, tweeted on Wednesday that it had prepared 135 emergency response containers with sleeping mats, blankets, rope, and other resources. Key among the items are emergency tents which can be "rapidly deployed" if families' makeshift shelters collapse during the storm.

One video showed winds flip over a bus before cutting to another shot of a crane dangling precariously from a tall building before finally plunging to the ground.

The footage was shared on Twitter Friday afternoon by Janak Dave, bureau chief of News18 India, a CNN affiliate.

Here's what you need to know about Cyclone Fani:

Cyclone Fani is so powerful, it broke windows at the Kalinga Institute of Industrial Technology today.

Chowkidar Amritanshu Shandilya, an engineering student at the KIIT, caught the moment on video.

“The storm hit when we were inside the hostel at KIIT. It was a very scary experience but whole hostel staffs were taking well care of students. They were taking all precautions," he told CNN.

“Trees were blown away from the roots, heavy wind was blowing of around 150 /170 km hr. It was scary experience but also somehow exciting as we are students.”

In 1999, the eastern state of Odisha in India was hit by a devastating cyclone that claimed more than 10,000 lives. It was a national tragedy that spurred an overhaul of India’s disaster response apparatus — the results of which have been visible as the country prepared for Cyclone Fani.

In years since the 1999 disaster, India created a new disaster response infrastructure.

In 2005, India introduced new laws to set up what’s called the National Disaster Management Authority, a central agency charged with one thing: responding to and minimizing the impact of disasters.

A year later, in 2006, India established a National Disaster Response Force, a specialized corps of highly trained men and women focused on disasters such as cyclones and earthquakes. It's now comprised of almost 25,000 personnel.

These specially trained responders — working with personnel from India’s wider armed forces — have been on the ground ahead of Fani's landfall, working to avoid a repeat of 1999.

Working with volunteers, local officials and NGOs, they have been moving door-to-door along the coastal villages asking people to evacuate. For those who insisted on staying, they trained them on necessary precautions to be taken.

Hundreds of shelter homes have been set up and over one million people have been evacuated. 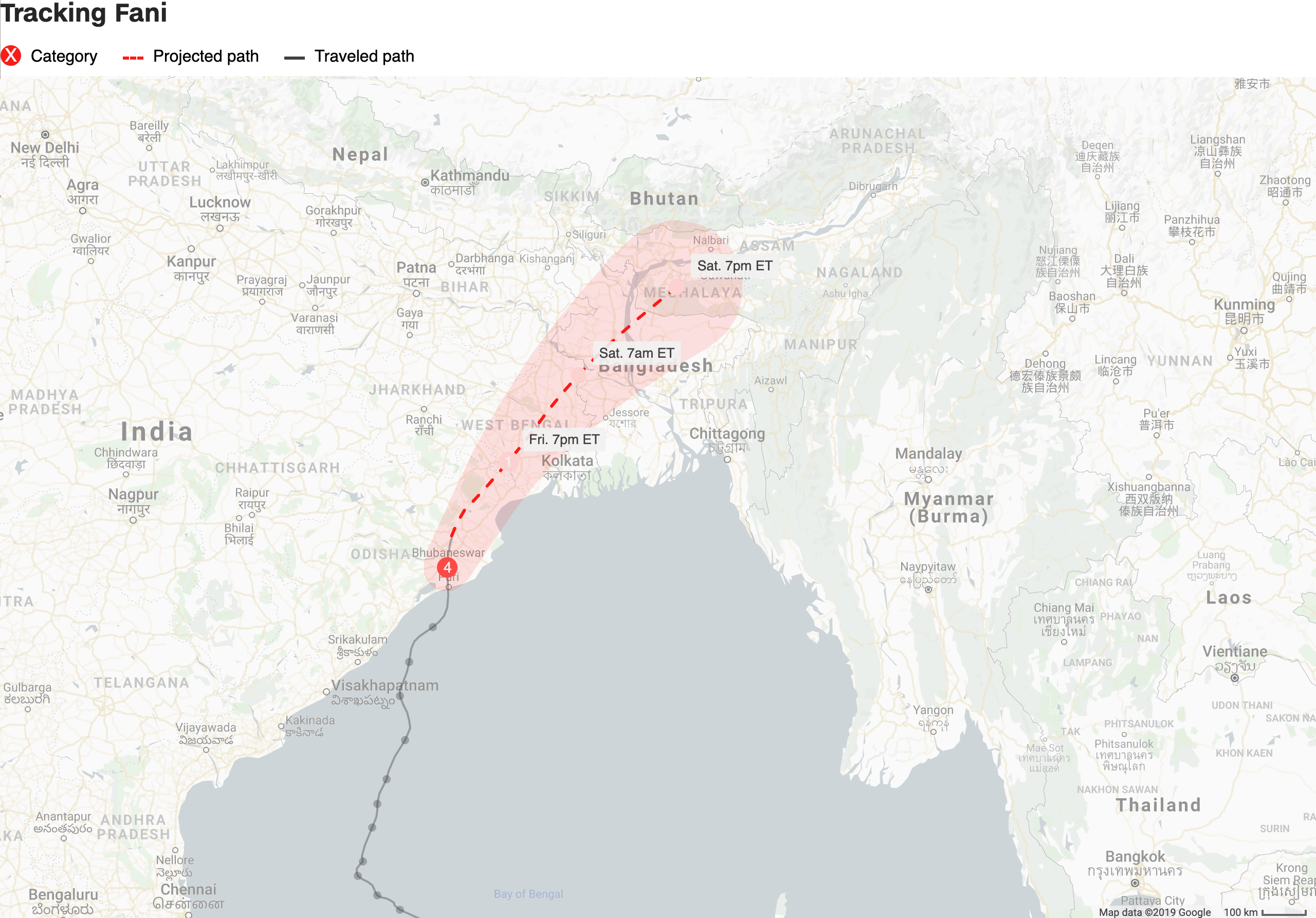 It is expected to weaken further over the next 5 hours.