The world's largest exercise in democracy is well underway, with the second round of polling taking place on April 18. We'll be following every twist and turn as up to 900 million people vote to choose their next leader.

“Some of the ideas are unimplementable and dangerous. They are for an agenda for the Balkanization of India," Jaitley said at a press conference on Tuesday.

Earlier that day, Congress released its key pledges for the election, which were heavy on subsidies for welfare programs for the poor and the scrapping of the country's sedition law.

“The Congress' leadership today is in the grip of jihadists and Maoists," Jaitley said. "They are saying in the Manifesto that Section 124A (sedition) will be removed from Indian Penal Code, committing treason is no longer a crime. A party that makes such announcements is not entitled to a single vote.”

WhatsApp has a new strategy for tackling misinformation during India’s election: Crowdsourcing.

The Facebook-owned mobile messaging platform on Tuesday announced a new tip line where users can send in messages, pictures or videos they want fact-checked. A “verification center” will respond to the user, indicating whether the information is true, false, misleading or disputed.

WhatsApp has commissioned an Indian startup to create the tip line, known as Checkpoint. It will be available in English and four Indian languages -- Hindi, Telugu, Bengali and Malayalam.

“This tip line will help create a database of rumors to study misinformation during elections,” the company said in a statement.

WhatsApp, Facebook and other social networks like Twitter have taken several steps to try and prevent their platforms from being used to spread misinformation during the election.

But with 900 million people eligible to vote and more than 560 million internet users, the tech firms have their work cut out for them.

Read more on how social media could be used as a weapon during India's election here.

A state party leader has gotten under the skin of Indian Prime Minister Narendra Modi for suggesting that the disputed state of Jammu and Kashmir might one day have a separate prime minister.

Omar Abdullah, leader of the northern Jammu and Kashmir state’s National Conference (NC) party said that Finance Minister Arun Jaitley had "threatened us that the government would work towards scrapping Articles 35A and 370."

The articles are a constitutional provision that grant Kashmir a unique status within India. It enables the state to have its own constitution, flag and autonomy over all matters except foreign affairs, defense and communications.

"Jammu and Kashmir is not like the other Indian states," Abdullah said at an election rally in northern Bandipora district on Monday. "We demanded that our identity will be our own. Our flag will be our own."

"Now, after 70 years you’re saying that the decision you made then was wrong because we decided to be a part of the Union of India on some conditions. If you’re asking about renegotiating our terms then we’ll also have to rethink about being a part of the Union. You will have to give us back all our terms,” he said.

Without naming Abdullah, Modi at a rally in southern city of Hyderabad said, “He says we will take the clock back and replicate the situation before 1953 and there will be two prime ministers in India, Kashmir will have its own prime minister”.

Modi demanded India’s main opposition Congress party to “answer with how its ally can say such a thing."

Article 35A was introduced in 1954. Apart from granting the state’s relative autonomy, it provides all residents with a permanent resident certificate giving them access to benefits relating to employment or scholarships. Only permanent residents have the right to buy and own property in the state.

Those living in the state from May 14, 1954 and those who have lived in the state for 10 years anytime since are considered permanent residents. 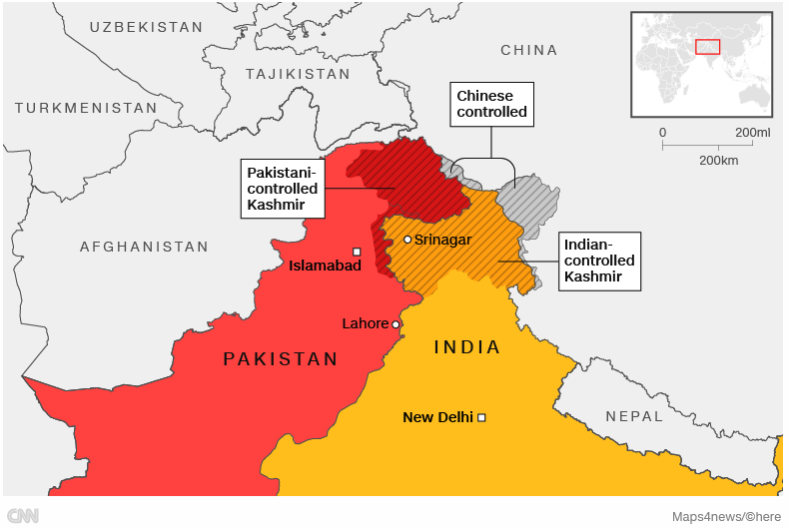 Pakistan and India are accusing each other of unprovoked fire across the Line of Control in Kashmir on Monday, with multiple casualties on each side.

The Pakistani military's media wing ISPR said in a statement that three of its soldiers were killed after "Indian troops resorted to unprovoked fire," and one soldier was injured. Pakistan's army "responded effectively," the statement adds.

On the Indian side, a five year old girl and a paramilitary soldier were killed, and 20 others were injured, Ramesh Angral, Poonch district police chief told CNN.

The firing comes off the back of recent escalating tensions between India and Pakistan that almost brought the two nuclear armed neighbors to the brink of war.

Speaking at a press conference on Tuesday, Congress Party leader Rahul Gandhi touted his election plan as an "inclusive manifesto" that would benefit the people and the economy.

“The two main problems in the country today are farmer distress and unemployment. The BJP (Prime Minister Narendra Modi's Bharatiya Janata Party) is trying to change the narrative."
"The youths are not getting jobs in India. Modi promised to create 20 million jobs per year and that was a lie. We have come up with an actionable plan to create jobs."

"We have thought of two big things for farmers. One, there should be a separate budget for farmers, like railways. Two, if farmers can't pay loans, that will be a civil offense, not a criminal offense."

On uniting the country:

“The BJP has been counter-productive to India's growth story. They have only divided communities, and weakened our security. The Congress Party will work towards uniting the country.”

On Gandhi's decision to contest his second seat in Kerala

On challenging the Narendra Modi juggernaut:

“Narendra Modi is scared. He is hiding. He doesn’t want to debate ... I challenge Modi to debate me on national security, foreign policy, corruption. I want to ask: why isn’t the prime minister   talking to you like how I am doing here ... Why don’t you ask the prime minister why he is scared of holding a press conference?”

The Congress Party unveiled its manifesto in New Delhi on Tuesday. Here are the key pledges:

Rahul Gandhi's flagship plan to eliminate poverty, called the Nyuntam Aay Yojana or NYAY scheme, will give Rs. 72,000 ($1,000) a year to the poorest 20% of households. The money will be transferred to the woman in the household, as far as possible, according to Congress.

Congress has pledged to make jobs its number one priority and said it will ensure 34 lakh (3.4 million) jobs in the public sector by filling government vacancies, as well as rewarding businesses for job creation and employing more women, and requiring businesses with over 100 employees to implement an apprenticeship program. Congress has not specified what the rewards will be or if there would be penalties for not creating apprenticeships.

Congress promised to implement "remunerative prices, lower input costs, and assured access to institutional credit" for farmers. This includes a separate budget for farmers and the establishment of a permanent National Commission on Agricultural Development and Planning.

Congress said it would enact its Right to Healthcare Act if voted into power that "guarantees every citizen free diagnostics, out-patient care, free medicines and hospitalisation." Congress said it plans to double the spending on healthcare to 3% of GDP by 2023-24.

Congress wants to simplify the Goods and Services Tax with a single moderate rate of tax, zero rating of exports, and exemption for essential goods and services.

The party pledged to increase defense spending and "expedite all modernisation programs" of the armed forces.

Quality Education For Every Child

Public school education for all kids aged 5-18 will be compulsory and free, Congress said. To ensure schools have adequate infrastructure and resources to teach kids free of charge from kindergarten to high school, Congress said it would double the spending in education to 6% of GDP by 2023-24.

Congress pledged to reserve 33% of seats for women in the Lok Sabha and the state legislative assemblies and reserve 33% of all posts in the central government for women.

Other key pledges include securing tribal rights for forest dwellers and introducing other land rights acts, ending hate crimes including mob lynching, which has risen in recent years, strengthening democratic freedoms, restricting the use of the Aadhaar biometric card as well as tackling air pollution and strengthening other environmental protections.

The head of NASA has called India's anti-satellite missile test a "terrible, terrible thing" that placed the International Space Station (ISS) and its astronauts at risk.

"It's unacceptable, and NASA needs to be very clear about what its impact to us is," US space agency administrator Jim Bridenstine said during a live-streamed  town hall meeting on Monday.

Here are the key points from his talk:

On March 27, India shot down its own low-orbit satellite with a ground-to-space missile, becoming one of only a small number of countries to do so.

You can read more on that here.

Bridenstine said that this "kind of activity is not compatible with the future of human spaceflight."

With the campaign in full swing, the company removed 687 pages and accounts linked to the country's main opposition party — the Indian National Congress — for "coordinated inauthentic behavior," it said in a statement Monday.

The company said those profiles were linked to people associated with Silver Touch, an Indian tech firm that has worked on government projects and reportedly developed Modi's personal mobile app.

Congress said none of its official Facebook pages had been taken down.

Producers of a controversial Narendra Modi biopic have denied allegations that the movie's release was timed to coincide with the elections in an attempt to woo voters for the Bharatiya Janata Party.

One of the film's producers, Sandip Ssingh, dismissed calls that they delay the movie's release until after the nationwide poll.

“We as filmmakers, as businessmen, have the right to choose our date, decide it and release it (the film). We have put in a lot of money and there is a huge risk,” he said.

Critics say the movie, which charts the course of Prime Minister Narendra Modi’s life, shows the Indian leader in a flattering light. It depicts his time during a spiritual retreat in the Himalayas, his victory in 2014 and the controversy surrounding the 2002 Gujarat riots.

In 2002, while Modi was the chief minister of Gujarat, anti-Muslim riots spread across the state, with more than 1,000 killed. Modi was criticized for not doing enough to stop the violence, but he was not charged with any crime.

The Congress filed a complaint with the Election Commission last week saying the film violated of the model code of conduct (MCC) that parties must adhere to during elections.

“This is no artistic venture. It is a political venture,” said Kapil Sibal, senior Congress leader Monday. “The purpose of this film is only political -- to get some extra mileage in the election.”

Lawyer to Vivek Oberoi, the actor playing Narendra Modi, said they have "submitted our detailed response to the election commission that this movie or biopic is not violating any model code of conduct,” said Hitesh Jain.

The Election Commission is yet to make a ruling on the complaint.