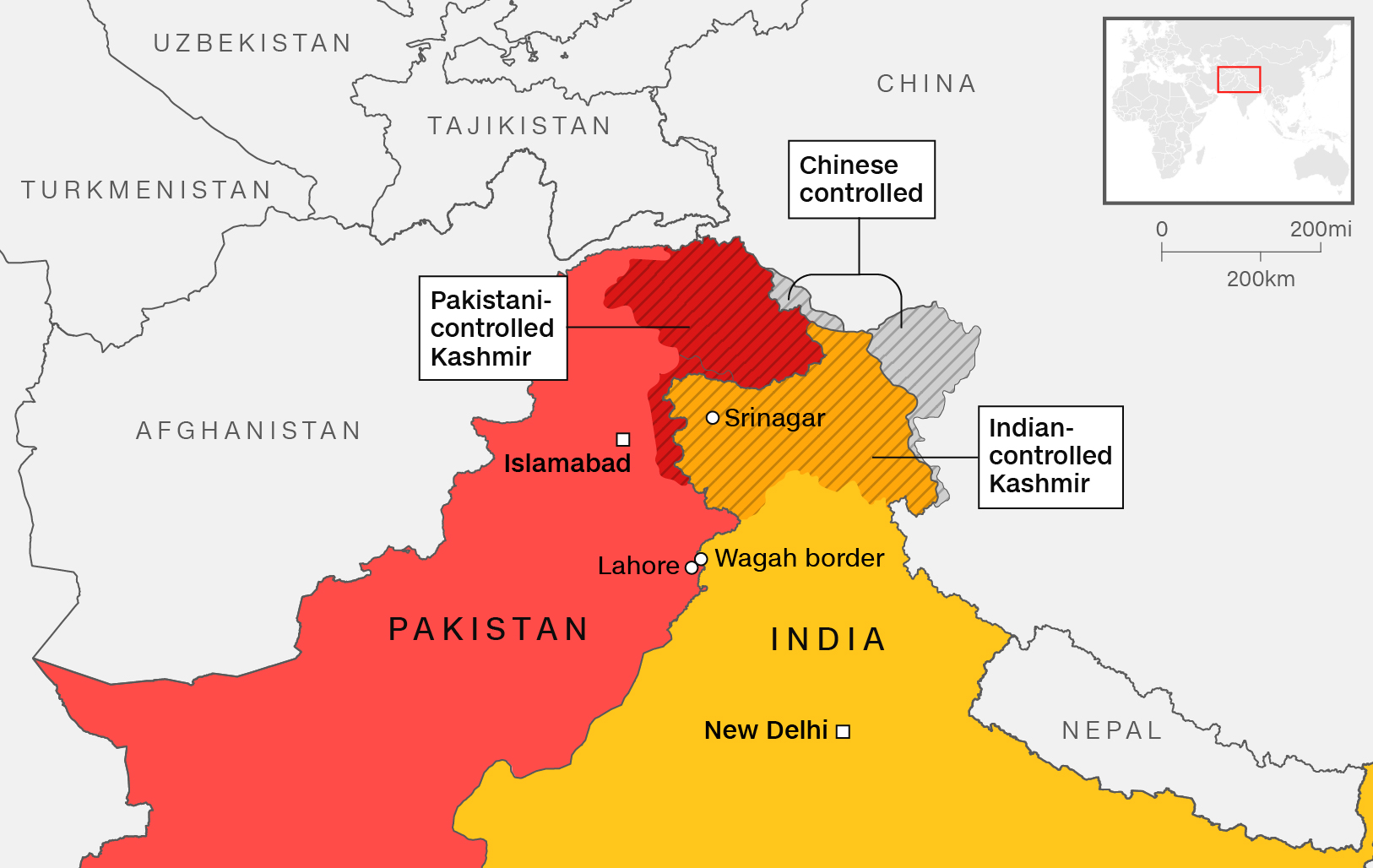 India has accused Pakistan of "unprovoked cease-fire violations" and "factually incorrect statements" on the confrontation between the two powers, military officials said Thursday.

In a joint press conference, the Indian Air Force, Army and Navy claimed Pakistan had used F-16 fighter jets to target military compounds. Pakistan had earlier said "India has been trying to establish what they call 'a new normal,' a thinly veiled term for doing acts of aggression at whatever pretext they wish on a given day."

"Pakistan claimed that they intentionally dropped weapons in open space where there was no human presence or military posts," Air Vice Marshal of the Indian Air Force, RJK Kapoor said. "The fact is that the Pakistan Air Force aircraft targeted military installations."

Kapoor also acknowledged Pakistan's decision to release on Friday the Indian pilot, who has been in Pakistani custody since his plane was shot down during a dogfight on Wednesday.

"The Indian Air Force is happy and looks forward to the return of Wing Commander Abhinandan," he said.

Despite the positive development that could defuse tensions, Rear Admiral Dalbir Singh Gujral of the Indian Navy said that the military remains "deployed in a high state of readiness and remains poised in all three dimensions. On surface, under sea and in air."

Al Nahyan emphasized the importance behind dealing with the "worrying developments" and working towards easing tensions between the two countries by prioritizing dialogue and communication, according to WAM.

It added that the Crown Prince reiterated the "UAE's keenness on ensuring peace and stability in India-Pakistan ties" and expressed his "great confidence in the two countries' leadership prioritizing peaceful dialogue in dealing with the developments that have occurred in the past few days."

US Secretary of State Mike Pompeo has urged India and Pakistan to avoid "any action that would escalate and greatly increase risk," he told reporters Thursday.

Speaking on board his plane after President Donald Trump's Hanoi summit with Kim Jong Un fell through, Pompeo said the US continues to be "very engaged" with the two countries and that he was "hopeful" that tensions could be cooling down.

India and Pakistan have been locked in a struggle over Kashmir for more than 70 years, and the restive region is back in the news again this week.

So why does the mountainous region mean so much to the two countries?

Kashmir initially remained independent and was free to accede to either nation. When the Hindu king of Kashmir chose to join India in exchange for military protection, Jammu and Kashmir state became the only Muslim-majority state in the country.

Jammu and Kashmir covers around 45% of Kashmir, in the south and east of the region, while Pakistan controls Azad Kashmir, Gilgit and Baltistan -- which cover around 35% of the total territory in the north and west. Both countries claim complete ownership of Kashmir; also in the picture is China, which controls around 20% of Kashmir territory known as Aksai Chin. 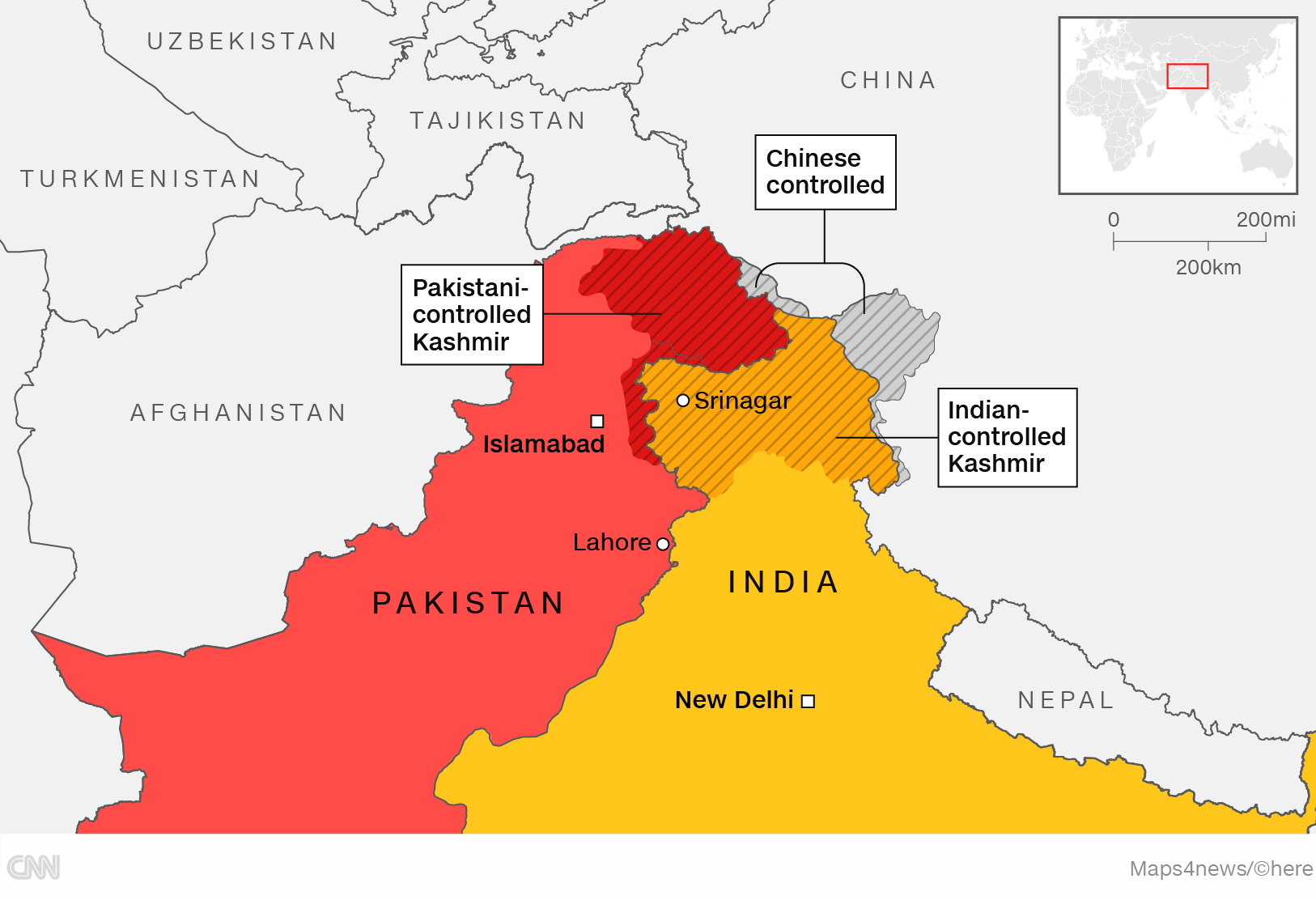 The issue is also one of the oldest items on the agenda at the United Nations, where India and Pakistan took their dispute soon after independence.

Both countries agreed to a plebiscite in principle, to allow Kashmiris to decide their own future, but it has never been held because it was predicated on the withdrawal of all military forces from the region, which has not happened even decades on.

Indian authorities wanted to show that they could guarantee the rights of Muslims in a secular state, but Kashmir is also key to Pakistani identity as a homeland for Muslims after partition in 1947, said Simona Vittorini, a specialist in South Asian politics at SOAS University of London.

Pakistan’s military says four of its civilians are dead and two others injured as a result of cross-border fire from India, a spokesperson told CNN.

Pakistan says it retaliated in response to India’s "deliberate firing on civilians." The most recent shelling by Pakistani artillery was in the Pani district of Pakistan-controlled Kashmir.

In a statement on cross border violence Thursday, Indian’s army accused Pakistan of initiating the attacks earlier this morning. The Indian statement said Pakistan fired mortars and small arms over the Line of Control and into the Krishna Ghati sector of Indian-controlled Kashmir.

Pakistan said that on Friday it would release the Indian pilot who has been in Pakistani custody since his plane was shot down on Wednesday.

“We are releasing the Indian pilot tomorrow as a gesture for peace,” Prime Minister Imran Khan said in a televised address Thursday.

Indian Prime Minister Narendra Modi made his first public comments since an Indian pilot was detained by Pakistan. Modi did not talk specifically about Pakistan or the pilot, instead, the prime minister spoke in general terms about trusting in the "army's capabilities" and working hard for the "prosperity of the country."

Meanwhile, hot off the heels of his summit with North Korean leader Kim Jong Un, US President Donald Trump addressed the crisis in Kashmir and alluded to possible US attempts to deescalate the situation.

"They've been going at it, and we've been involved in trying to have them stop. And we have some reasonably decent news, hopefully that's going to be coming to an end," said Trump.

Pakistan's Finance Minister Asad Umar said that the country is "at the cross road of history" as tensions between the nuclear armed neighbors become increasingly fraught. While the Indian Minister of State for External Affairs, General Vijay Kumar Singh called for the release of the pilot who was taken into custody in Pakistan. Identifying him as Wing Commander Abhinandan, Singh described him as the “embodiment of a mentally tough, selfless & courageous soldier."

And there were severe disruptions to thousands of flights around the world as Pakistan closed its airspace for the second straight day. All international and domestic commercial flights in and out of Pakistan were canceled "until further notice" and Thai Airways announced that all its European routes were suspended. The airline later reopened its routes to Europe but Thai Airways flights to Pakistan remain canceled.

For more on the border crisis between India and Pakistan, here's analysis from CNN's Nic Robertson and Euan McKirdy.

When two populists go to war, there is every chance their people will suffer more than they will.

These are the stakes that face both the recently-elected Imran Khan in Pakistan and Narendra Modi, of the Hindu Nationalist Bharatiya Janata Party (BJP) in India, who is soon to face the electorate again.

To avoid escalating their current confrontation, the two prime ministers will have to face down the powerful pull of historic rivalries and mistrust, coupled with the more immediate needs of their own political careers.

Since they became nuclear powers, every time India and Pakistan have gotten to the point of toe-touching, eye-staring aggression the international pressure on them to step back from the brink has ratcheted up.

It's no different now, with the US, UK and even China imploring both countries to back off in the past 48 hours.

During Pakistan’s general election last year, Imran Khan was dismissed by detractors as a political lightweight and foreign policy novice who relied on populism and deference to the country’s influential military for support.

Now, just over six months into his role as Prime Minister, those claims are being tested as Khan finds his country closer to war with its nuclear-armed neighbor, India, than at any point in the past 20 years.

Michael Kugelman, a South Asia expert at the US-based Wilson Center, said the crisis will likely give Khan’s popularity a boost.

“In Pakistan there’s nothing like aggression from India to rally the people,” he told CNN. “The fact that Pakistan had India come into the country to stage these airstrikes, it’s an embarrassment for the military. But the entire country will rally round Imran Kahn to support him.”

However, Kugelman said this is a political test for Khan, who formed his own party 23 years ago.

“He certainly is a neophyte, he has no experience as a national leader, he’s been a politician for a number of years but hasn’t been in a position of national power,” he added.