It was the longest minute of my life. The gunshots just kept coming. -- CNN iReporter Adam Witt 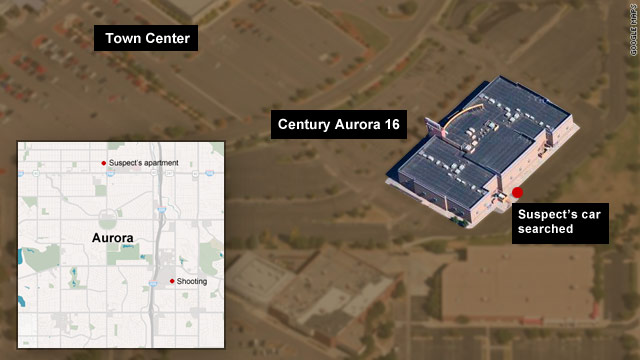 He was just literally just massacring anybody that got up that was trying to run away. -- Jennifer Seeger, was inside theater
AUDIO
Listen to Aurora Police dispatch as events unfold 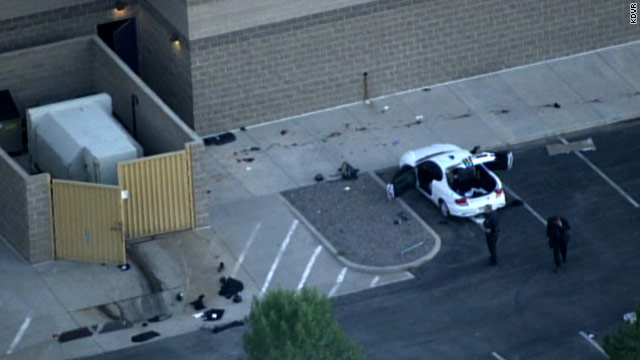 Law enforcement officials search the suspect's car in the parking lot behind the Century 16 theater.
He was just literally shooting everyone, like hunting season. -- Chris Ramos, was inside theater
Suspect James Holmes purchases a ticket and walks into the movie theater. He sneaks out an exit door and leaves it propped open, gathers his weapons and gear, and walks back into Theater 9 through the exit door.
Approximately 12:37 a.m. -- Witnesses say the movie has been under way about 20 minutes in Theater 9 when an exit door to the right of the screen opens and a man walks in. They say he is dressed all in black and wearing what appears to be a bullet-proof vest and a gas mask. He throws something, which begins hissing and emitting smoke. Witnesses say the suspect shoots into the ceiling and then starts firing into the crowd. Pandemonium follows as people start scrambling to get out, hide under the seats and escape any way they can.
12:39 a.m. -- Aurora police say dozens, perhaps hundreds, of calls start flooding 911. The dispatcher calls to units: "They're saying someone is shooting in the auditorium."

Moments later she adds: "There is at least one person shot, but they're saying there's hundreds of people just running around."

Inside the theater, witnesses say the gunman is calmly firing into the crowd. Some of the shots penetrate into a neighboring theater, where witnesses suggest others may have been hit. Witnesses say they see victims slumped on the floor as they flee while others are running out wounded.
12:40 a.m. -- Officers arrive on scene in little more than a minute after the 911 call and request massive backup. "I've got people running out of the theater who were shot," says an officer on a call.

"Got a victim who was shot in the face," another adds.

Dispatch orders that "all available units respond to theater."
12:42 a.m. -- Officers surround the building, focusing on Theater 9. Witnesses are telling them there is still "someone actively shooting" inside. Officers smell something which one identifies as pepper spray. An officer says, "Get us some damn gas masks for Theater 9, we can't get in!"

Inside, police say, the gunman was shooting at the crowd with an assault rifle, a shotgun and a .40-caliber handgun. Police say he fired "a lot of rounds very rapidly."
12:44 a.m. -- Victims continue pouring out from Theater 9 as officers are clearing neighboring theaters.
12:46 a.m. -- Just outside the back of Theater 9, officers say they find a man who matches the suspect's description and take him into custody. They report over radio: "We've got rifles, gas mask, he is detained right now. I've got an open door going into the theater."

Police later say -- in addition to the vest and gas mask -- the suspect was wearing a ballistic throat protector and groin protector, as well as what police call "black tactical gloves."

Police are inside Theater 9 finding many more victims. "I've got seven down in Theater 9," one says over the radio. "We need rescue inside the auditorium, multiple victims."

One adds, "I've got a child victim. I need rescue to the back door of Theater 9 now."

Another says, "I got one victim eviscerated."

Police and witnesses describe a wide variety of injuries; people shot in the arms, legs, neck, and back.
12:51 a.m. -- Police say the "suspect says he is the only one."
12:55 a.m. -- Police establish a perimeter around the entire mall area to look for witnesses, victims, and any possible accomplices. With ambulances unable to carry all the victims, other police officers are transporting victims to hospitals in their squad cars.