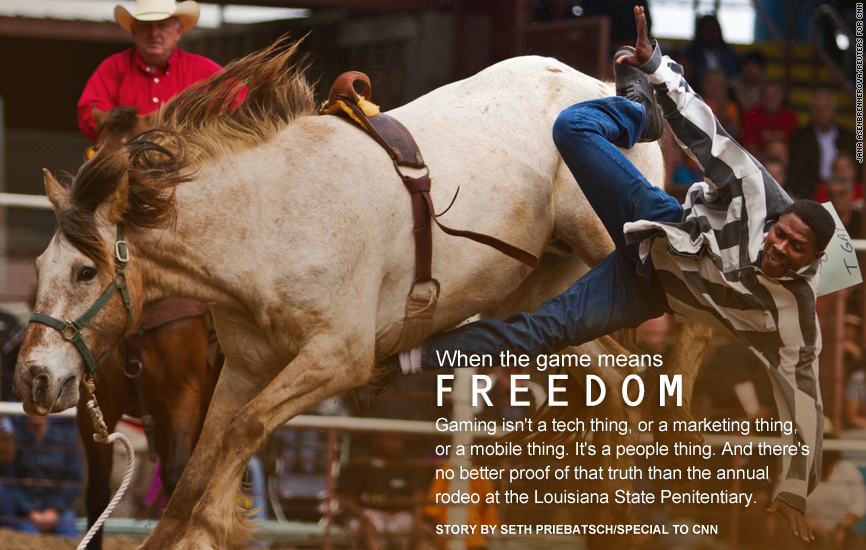 Editor's note: Seth Priebatsch, founder of mobile companies SCVNGR and LevelUp, is an expert on the way games and game mechanics are changing life in the real world.

(CNN) -- On October 20 in a small town in Louisiana, there will be a rodeo, complete with the prerequisite boots, bulls and Marlboro-man doppelgangers.

But this particular rodeo will take place not at a fairgrounds, but at the Louisiana State Penitentiary, also known as "Angola." The riders are untrained inmates who have earned the right to participate -- and feel up to 6 seconds of freedom atop an angry bull -- in a highly calculated and wildly effective prison reward system.

Oh, we'll get back to that.

First, though, I want to acquaint you with Burl Cain. He's the Angola warden that I'm fairly convinced moonlights as a savvy game designer. In 2004 Cain was charged with giving a makeover to America's largest and bloodiest maximum-security prison, home to 5,300 violent offenders.

It was a Goliath-sized task. Angola was stained with a long history of gang violence and one particularly gruesome incident back in the 1950s when prisoners cut their Achilles tendons to protest poor lockdown treatment. Ouch. At LevelUp, the mobile payment and gaming company I founded, I thought our recent protest against the soy "cheese" in the communal office fridge got ugly.

Cain's play-by-play at Angola reads like a deck of game-mechanics cards. To change behavior, he introduced a progression system that was notched with "appointments" -- challenges inmates had to conquer to in order to get a reward. Rise to the challenge and you could earn the right to own a pet, to take a job, even the freedom to roam the grounds.

To reach the highest level, known at Angola as becoming a Trustee, can take up to 10 years. It's not an easy game, but it's one that the majority of its players are highly motivated to play.

Today, Angola is a thriving prison environment that has successfully "rehabbed" many hardened criminals into productive Trustees. Prisoners have a sense of ownership, achievement, status and some healthy envy -- not to mention an award-winning prison newspaper.

Of course, this is not a new concept. Prisons have long used incentive systems to motivate inmates. But Cain's implementation is unique. His approach has flourished because he evaluated his target audience and recognized that the traditional reward system was broken. Cain realized that his audience -- many of them men facing life or double-life sentences -- might not be motivated by standard rewards like additional phone time, longer visitation hours or upgraded quarters.

But they would be motivated by an incentive that offered them meaning -- something they could be proud of. Cain believed the opportunity to be a champion could infuse meaning and pride back into the prison experience while motivating inmates to be better men.

Which brings us back to the rodeo.

At a certain point in the climb to Trustee status, inmates earn the opportunity to participate in the Angola Rodeo, held each spring and fall in an arena that holds more than 7,500. The day consists of 11 events, including bull riding. The 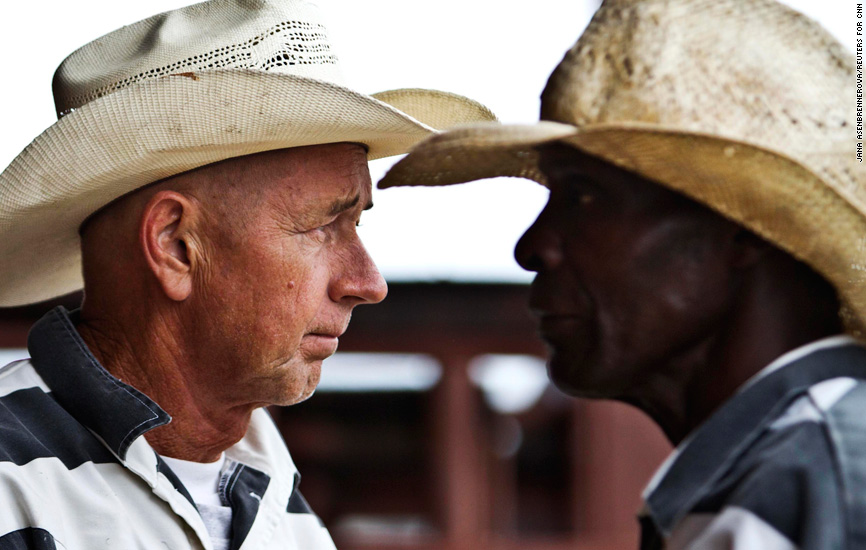 The first inmate rodeo at a state prison in Angola, Louisiana, was held in 1965.

beast in question is a 2,000-pound Brahma bull, and most times the inmate rider has never been on the back of a bull before. All is not fair in prisons and rodeos.

If that isn't exciting enough, the finale also includes a pair of poker-themed events. "Convict Poker" begins with four inmates sitting in chairs, playing a friendly game of cards at a table in the middle of the arena. A bull is released into the pen, and the last inmate to remain seated when the animal charges the poker table earns the win. Poker face most definitely required.

The rodeo closes with an event called "Guts and Glory," in which a poker chip is tied to the biggest, baddest bull in the pen. The winner is the first brave inmate who gets close enough to snatch the chip.

It's not as unprofessional as it might sound. Seasoned rodeo clowns are always present in the arena to distract angry animals, and a team of emergency medical personnel is waiting in the wings.

Still, the whole enterprise is speared with controversy, for obvious reasons. Precautions aside, inexperienced inmates are facing off with agitated, unpredictable animals in a costly, injury-ridden event. Change the name and tweak the specifics, and the Angola Rodeo could easily become the plot of the next bestselling dystopian thriller. "The Hunger Games," anyone?

And yet, the rodeo is a powerful motivator for inmates, for two reasons.

The first is pride. Prisoners are willing to face serious injury for the chance to be cheered on by thousands of onlookers. The event represents both an earned right and a true challenge to overcome.

The second, overarching incentive is meaning. It's huge. It's the reason why we as people respond to games and game-like scenarios. Games, especially those with powerful incentive systems, lead us up a ladder and allow us to grasp at something intangible. Much like the Greeks filled stone stadiums to watch gladiators, people are tuning in to the new reality TV show, "Louisiana Lockdown," to see Angola's prisoners succeed or fail. Audiences aren't just responding to the rodeo itself, they're responding to the game mechanics that are driving the inmates' right to participate in the rodeo.

It's a testament to how more people are embracing gamification, which applies game-design thinking to real-life situations to make them more fun and engaging.

You don't need an app or a product or a business to use game mechanics. You just need a person or a group of people with a behavior that you'd like to change.

We've seen a recent shift in thinking about gamification, for two reasons. First, game mechanics has gotten a huge amount of coverage over the past year in the tech press. Such overexposure is often the first step for a new human or technological shift to take root in a meaningful way. (Remember when a social network was launching every five minutes? Social alarm clocks, social microwaves, social networks for the dead. Weird stuff.) But testing every element of a new paradigm is often a necessary step in figuring out what will work best.

The same thing happened with game mechanics. People launched tons of applications of game mechanics -- many of them good and many of them bad. The media cried overexposure and there was a natural backlash. "I don't want marketers manipulating me!" "This isn't fun!" But this oversaturation helped us find the most worthy apps.

That brings me to the second part of this shift. Game mechanics are now being used in more and more "mainstream" ways. The crowdsourcing fundraisers at Kickstarter have had an incredible year motivating people everywhere to back things like indie films and new gadgets through unique opt-in rewards and a few smart progression dynamics.

Have you seen the shiny new dashboard on President Obama's campaign site that enables supporters to join up from their laptop? That's a form of large-scale, real-world communal gaming. And let's not forget Guitar Pee, the interactive urinal that turns the call of nature into a game, complete with a rewarding song download. Brazil, how do you always produce the best ideas?

So yes, the gamification space is expanding in exciting ways. It's not just a tech thing, or a marketing thing, or a mobile-gaming thing.

It's a people thing.

Angola is living proof that game mechanics have come a long way from motivating us to water virtual crops in FarmVille. As inmates become Trustees and take their shot at fleeting glory atop rampaging bulls, game mechanics are becoming a commonplace, mainstream approach to solving even the most intractable of problems.

The opinions expressed in this commentary are solely those of Seth Priebatsch.