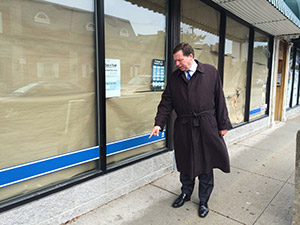 Alderman Joe Moore points to the spot where William Lewis fell after bullets meant for someone else killed him in the Chicago neighborhood of Rogers Park. For Moore, gun violence is no longer an abstract issue.

July Fourth weekend in Chicago was particularly brutal – 82 shooting incidents, 16 of them fatal. Before that, Easter brought 40 shootings and nine deaths. Gun violence raged in the headlines.

Fighting senseless crime was always high on Joe Moore’s agenda, but this summer, the Chicago alderman’s commitment was sealed in the most personal way.

The issue no longer remained an abstract. It became raw and real.

An attorney by trade, Moore, 56, loved politics and was elected in 1991 to represent Rogers Park, the neighborhood of his youth. It was the way he chose to contribute to the North Chicago community he loved.

Gun violence seemed more critical now than ever, after Chicago outpaced New York and Los Angeles in shootings and developed a reputation as the nation’s gun capital. Even as the city’s overall crime decreased, the number of shootings was still high.

Last year, 2,185 people were wounded or killed in shootings, according to a database compiled by the Chicago Tribune. This year, that number had reached 1,839 as of November 13.

But it was the 153rd shooting death that affected Moore like no other.

It was the kind of crime that didn’t much happen in Rogers Park when he first moved to the area 34 years ago. Even for today, the circumstances were shocking to Moore and his constituents.

It happened on July 12, a bright, warm day -- perfect weather, Moore thought, for canvassing the neighborhood.

The 49th Ward had just been remapped and Moore was eager to walk the streets of new territory. He and his team planned to spend most of that Saturday fanning out across Rogers Park, identifying voters who might consider casting a ballot for him in next February’s elections.

Moore took great pride in how Rogers Park was rebounding from years of decline; how ethnically and economically diverse it had become. Compared to other parts of Chicago, the crime rate was low. When he became alderman, he says, the neighborhood averaged 18 homicides a year. In the last few years, it had dropped to about seven.

He was proud, too, that he’d championed community policing efforts. Chicago was one of the first cities in America to try alternative approaches, though the city’s program gets mixed reviews. Moore argues that it has helped bridge gaps between constituents and police officers. Critics say the program has been largely ineffective. 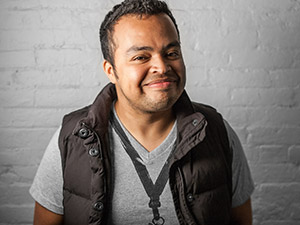 Photographer William Lewis and his wife, Maria, had just moved to Rogers Park. Lewis, 28, was out exploring his new community when he was killed, an innocent bystander who became one of Chicago’s many gun victims.

At midday, Moore took a break for lunch and ordered pizzas at the office. A friend called to ask if Moore wanted to join him at Wrigley Field for an afternoon game. The Cubbies were taking on the Braves. Moore thought about it for a few minutes but chose work over play.

Moore came across John Arnsdorff tending to small patches of flowers outside his specialty store on the corner of Wayne Avenue, where he sells vintage turntables and old vinyl. Moore was a fan of music from the 1960s through the early 1980s and decided to check out Arnsdorff’s collection.

That first introduction, as it turned out, came under chilling circumstances.

Now, two months later, Moore and I stand outside Audio Archaeology. He shows me how it all went down on that afternoon.

Just as he stepped outside Arnsdorff’s store, Moore heard a “pop, pop, pop.”

He knew immediately it was gunfire. Why would there be fireworks going off in the middle of the afternoon? Besides, he’d heard gunfire before.

Moore saw a young man – he looked like he was the age of Moore’s teenage son. About 17. He was carrying a big handgun with a long black barrel and was a block away from Moore, at the next street, Glenwood Avenue. He had on a white T-shirt and dark pants. Moore saw him crossing at the intersection. He saw people fleeing, trying to get away from the young man.

Then, Moore’s eyes fell on a man lying on his stomach on the sidewalk.

“I didn’t know if he was ducking for cover or if he had been hit,” Moore says, pointing to the spot outside a shuttered storefront. “He wasn’t moving. I’d been to a scene of a crime before but I had never seen someone shooting someone intentionally.”

Moore assumed at that moment that the man who was down was a gang member. Gang violence has spiked in neighborhood pockets.

“I reached for my cell phone to call 911 but I realized I had left it in my car,” Moore recalls.

It was eerily quiet. There was no one around. All Moore could hear was the whooshing sound of passing cars and buses behind him on West Devon Avenue.

Moore walked back into the audio store and asked Arnsdorff to call the police. They arrived within minutes, taped off the area. Paramedics tried to revive the victim. He was rushed to a hospital but didn’t survive.

“I was still in a state of disbelief,” Moore says. “I was walking in that direction. If I hadn’t stopped that day to talk to the store owner, that could have been me. This incident told me that this can happen to anyone, anywhere.”

Later that evening, he and his wife were driving to a block party when he noticed bloodstains still on the pavement.

“We have to do something,” his wife said.

Moore went to a local dollar store and bought a toilet brush, water and bleach and returned to the scene to clean it up. By then, a man who appeared to be a manager of the building was cleaning the area. Moore and his wife helped.

Later, Moore learned all of the facts of the shooting. He learned the victim was not a gang member. But the intended target was.

Police arrested Eric Vaughn, a 31-year-old man who had previously been sentenced to seven years in prison for a 2004 attempted murder conviction. The Chicago police arrest report links Vaughn to the Conservative Vice Lords street gang.

Vaughn stopped his black 2014 Toyota Camry, pulled out a gun and handed it to one of the passengers, Denzel Burke, police say. Vaughn allegedly spotted a rival gang member and said, “Wet that T-shirt up,” slang for “make him bleed.”

Burke, 15, and another teenager, Michael Phillips, 17, jumped out of the car and chased the other youth, according to court documents. Burke shot at the youth several times.

The Cook County prosecutor’s office would not comment on the case but Assistant State’s Attorney Glen Runk told the Chicago Sun-Times in July that the target was a member of a rival gang.

Hours after the shooting, Moore learned Lewis and his wife had just moved to the neighborhood two weeks before. He was 28, a photographer. He was born in Guatemala City but was adopted at age 7 and grew up in California and Wisconsin. He loved the Green Bay Packers and the Dave Matthews Band.

He had married Maria two years ago. They were creative partners, she wrote in an online post. He whispered “Skittlessss!” in her ear at parties and she whispered back, “Taste the rainbow.”

Her husband had set off that day to find containers for a shelf; he bought nine red bins. After lunch, she says, he set off again to explore their new neighborhood. He just happened to be in the wrong place at the wrong time.

“When I found out the victim was not a gang member, I felt a certain amount of guilt,” Moore says. “What if I’d said some encouraging words to him and not kept my distance at the crime scene? He wouldn’t have died alone.

“Not that a gang member’s humanity is any less.”

Vaughn, Burke and Phillips are charged with first-degree murder and have entered not guilty pleas. The two teens will be tried as adults. The public defender’s office did not respond to requests for an interview.

Lewis’ shooting – brazen and in the middle of the day – shocked residents of Rogers Park. And propelled Moore to stay with his quest.

He helped organize a walk to honor the memory of Lewis and show community solidarity against senseless violence. It was called “positive loitering.” In October, he attended “Fallapalooza 2014,” an event organized by Arnsdorff, the audio store owner, to support neighborhood watch programs.

Moore regularly posts about crime on his blog and reported that Chicago police had deployed extra units to his district.

He says he doesn’t in any way want to exploit Lewis’ death, but he mentions it now when he talks about preventing gun violence, a topic that’s no longer an academic exercise. He carries the burden of bearing witness.

Stories from a single day