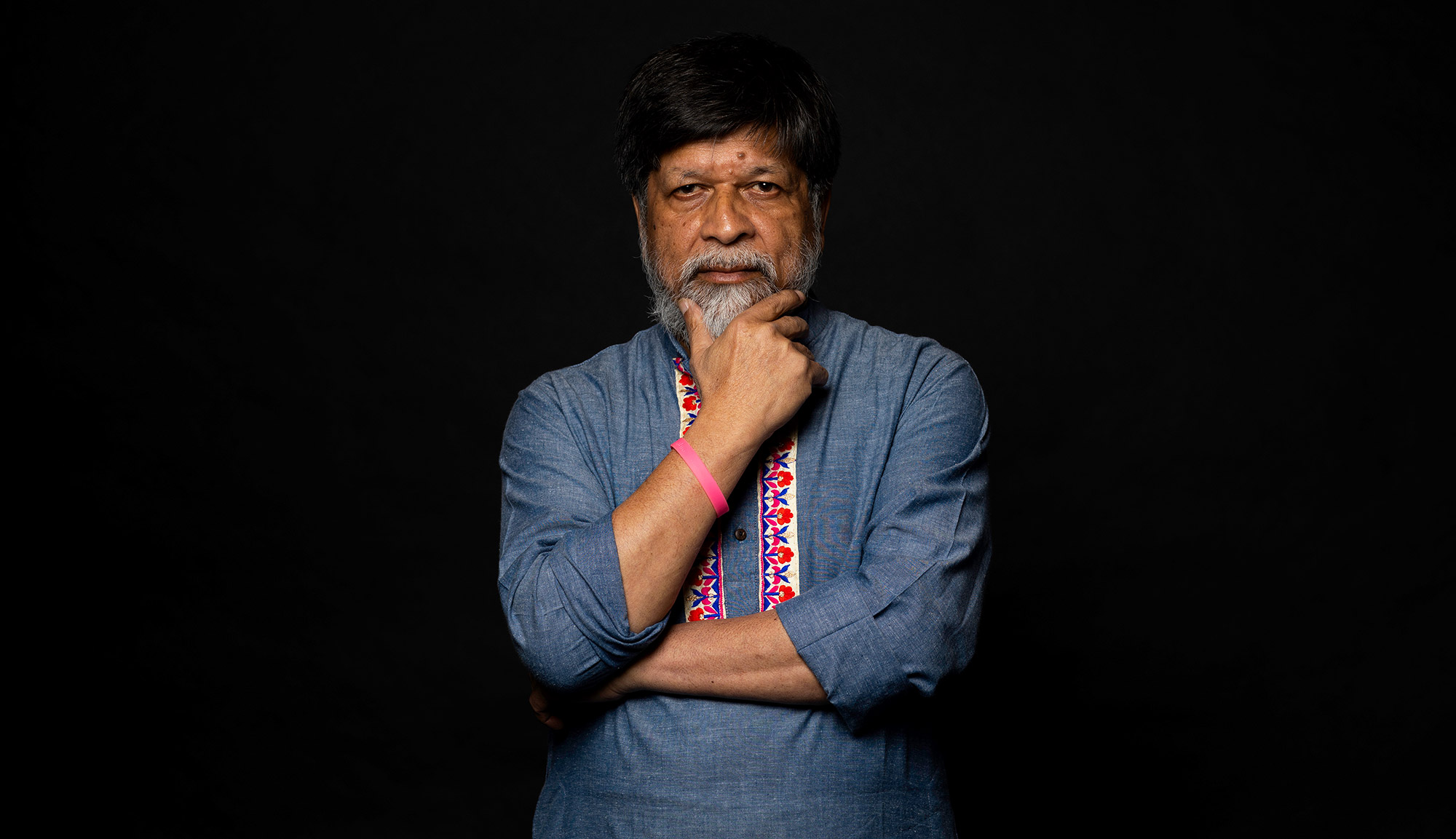 Shahidul Alam poses for a portrait in New York in April 2019. Mohammed Elshamy/CNN

This photographer spent 107 days in jail. But he won’t be silenced

Shahidul Alam poses for a portrait in New York in April 2019. Mohammed Elshamy/CNN

After Shahidul Alam went on TV last year and criticized the government of his native Bangladesh, the renowned photographer was taken from his home and thrown in jail for 107 days.

If it was meant to quiet him, it didn’t work. He remains as defiant as ever.

“I see myself as a citizen of an independent nation, and my constitution gives me rights. And I intend to exercise those rights, and I will continue to do so whether or not the regime tries to stop me,” he said this week in a phone interview with CNN. “That's what I was doing before, that's what I'm continuing to do, and that's what I will keep on doing.”

Alam, a well-known activist in the South Asian journalist community, was arrested in August after comments he made during an interview with Al Jazeera. Alam, who had been covering student protests that paralyzed parts of the country’s capital of Dhaka, told Al Jazeera that the unrest was about more than just road safety, and he accused the government of Prime Minister Sheikh Hasina of clinging to power by “brute force.” 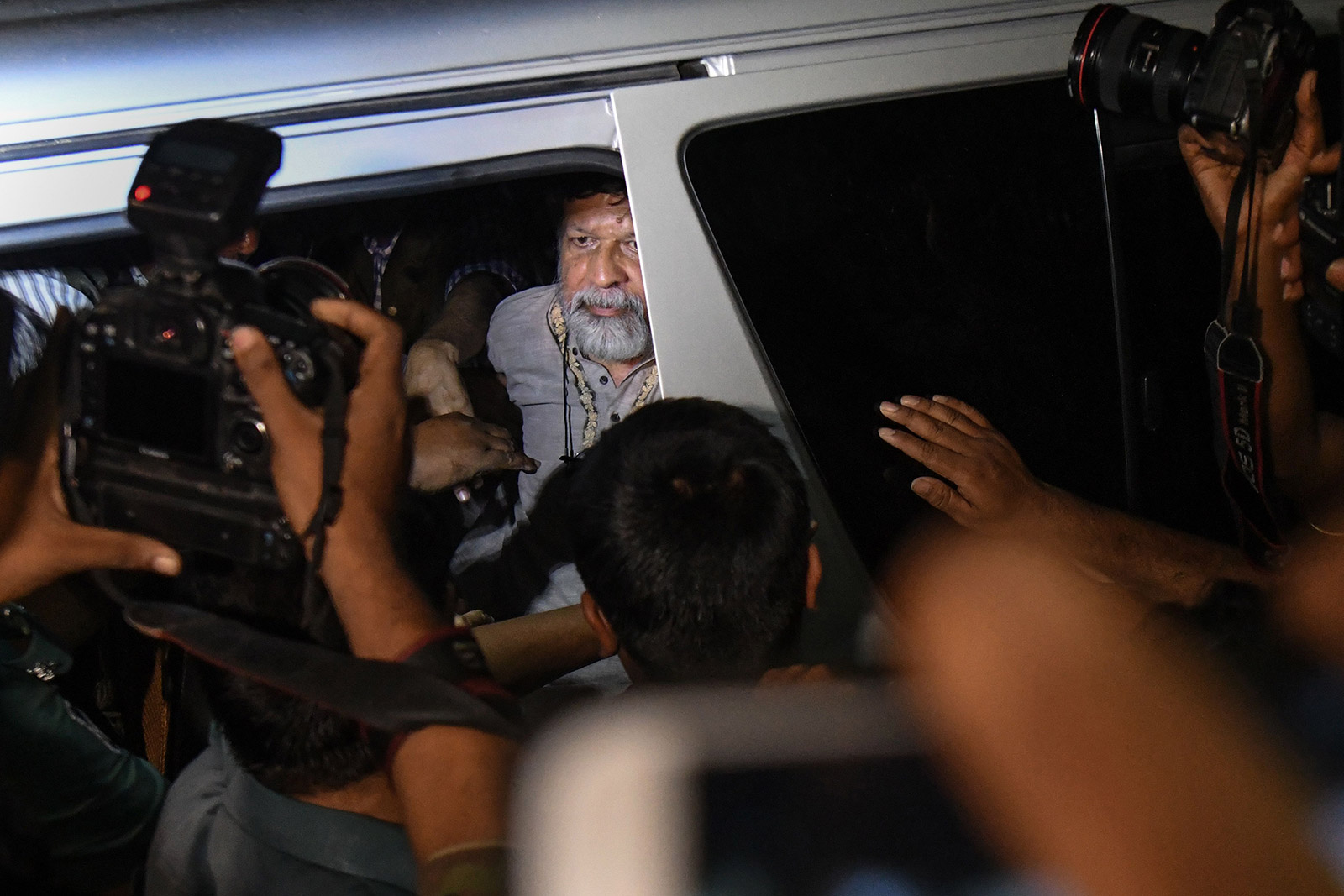 Soon after, he was charged with spreading rumors and false information via text messages and inciting violence against the state. He said he was also tortured by police, an allegation authorities have denied.

As news of Alam’s arrest spread, along with photos of him raising a fist in defiance, there was an international outcry. Human rights groups called for Alam's “immediate and unconditional release,” slamming the allegations against him as “a blatant violation of his right to freedom of expression.”

Alam said he was aware of the #FreeShahidulAlam campaign while he was behind bars. He said it energized him.

“It made a huge difference not just to me but also for my fellow prisoners, because they then felt that this was a campaign against injustice — not merely a campaign for my freedom,” he said. “They were the ones who would constantly get information to me. Fellow prisoners actually made a radio for me so I could listen to the news.” 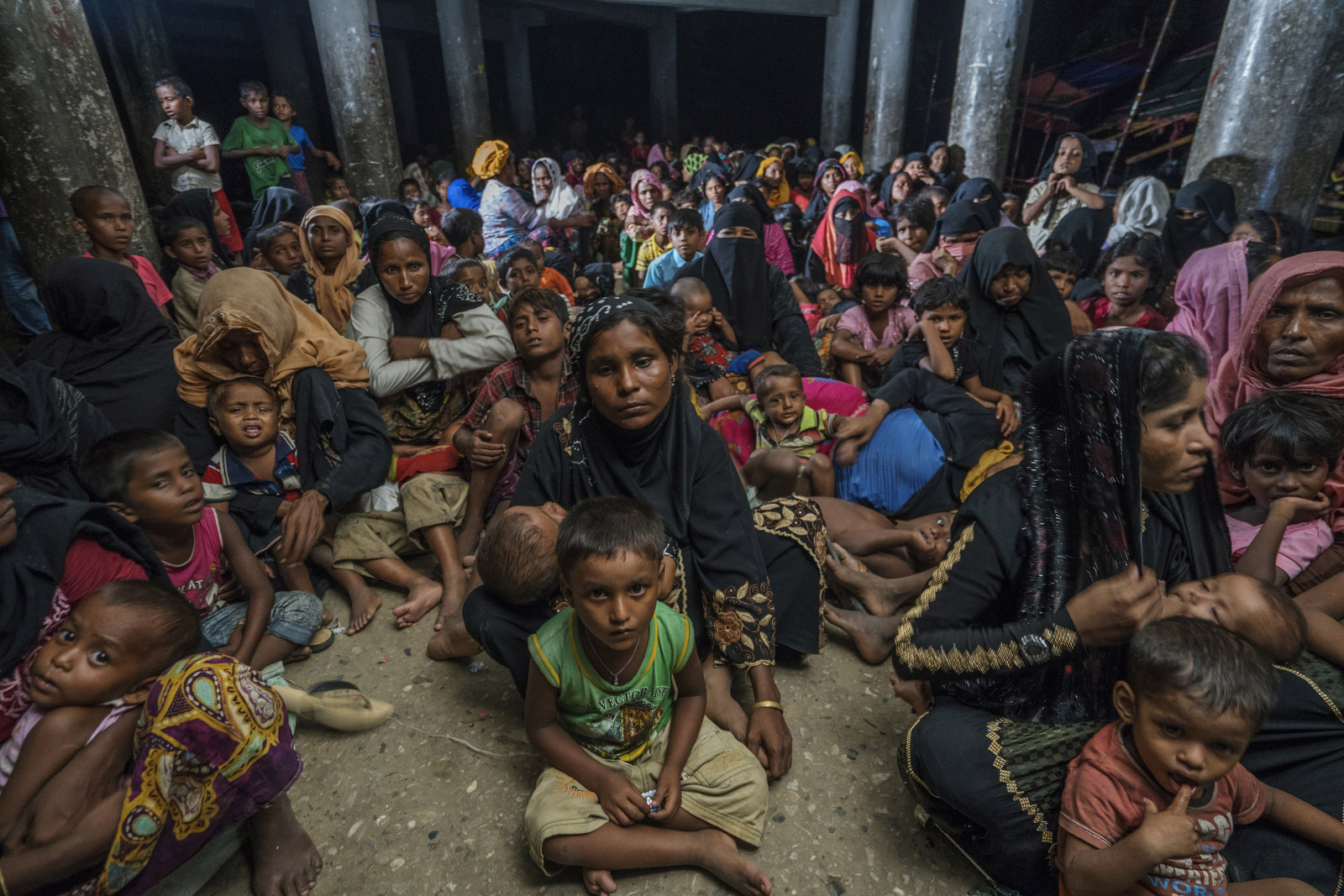 This photo, taken by Alam, shows Rohingya refugees in a Bangladeshi cyclone shelter in November 2017. For decades, Alam has documented stories in his country and other parts of South Asia. His topics have included human rights issues, political crises and natural disasters. Shahidul Alam/Majority World/UIG/Getty Images

In November, Alam was released on bail. A month later, he was among the journalists featured in Time magazine’s annual Person of the Year issue.

But his freedom remains in the balance.

“The case still hangs over my head,” he said this week. “If sentenced, I face a maximum sentence of 14 years.”

Running afoul of the government is nothing new for Alam, who has been critical of Bangladesh’s various leadership going back decades.

Over the years, he’s had a loaded gun pointed at his head. He’s been stabbed. But when fighting for social justice, he says, the risks come with the terrain. 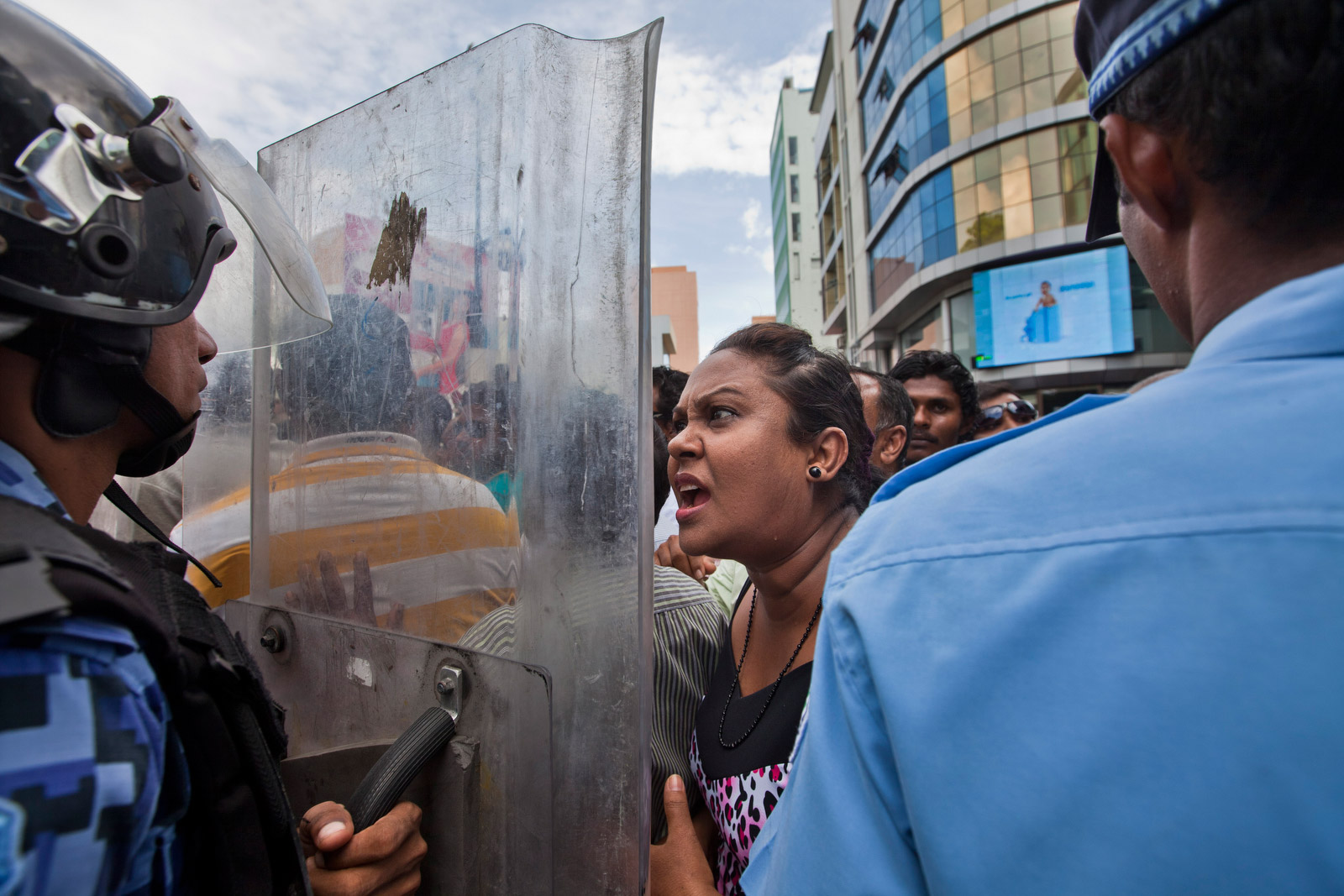 In this photo taken by Alam, people in Male, the capital of the Maldives, protest in 2012 to show their support for Mohammed Nasheed, who resigned after a revolt by police officers, his spokesman said. Nasheed was the first democratically elected president of the Maldives in three decades. Shahidul Alam/Majority World/UIG/Getty Images

“The job of a journalist is to be at the edge, to be constantly alert, to be feeling the heat,” he said.

It’s what he has been teaching his students for years at his photography school in Dhaka, the Pathshala South Asian Media Institute.

He doesn’t tell them to be martyrs — “martyrs don’t make good reporters,” he said — “but I also remind them that they came into a profession which requires them to take certain risks, and unless one is prepared to do so, perhaps one is in the wrong profession.”

The war for social justice is one of the reasons Alam started the school as well as Chobi Mela, Asia’s first photo festival.

“I recognized that if I was to fight a war, I needed warriors, and I started the school and later on the festival — the idea being that we would get pressure upon the political space through three areas of intervention: media, education and culture,” Alam said. 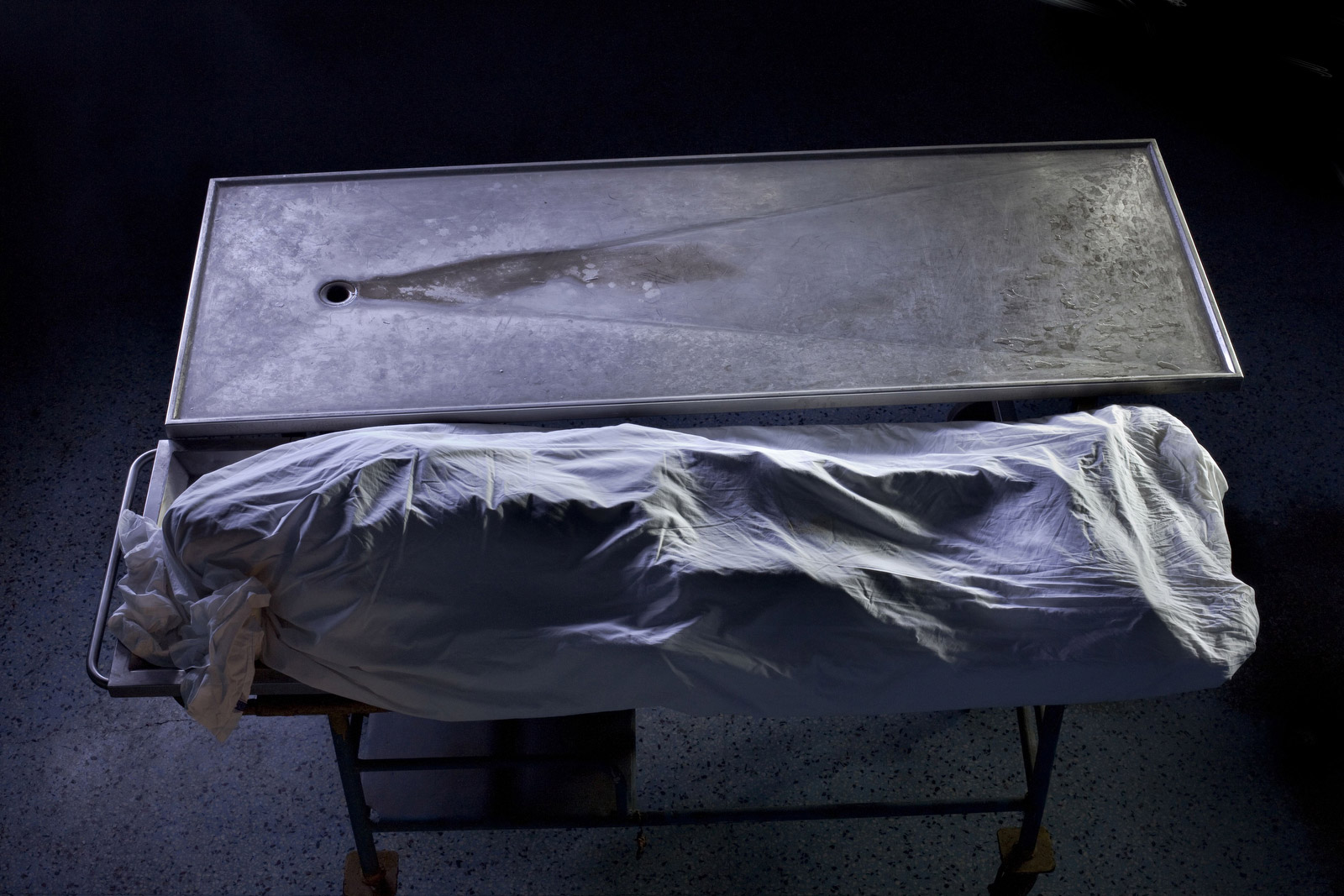 A body rests in a morgue in Bangladesh. It was part of “Crossfire,” Alam’s photo story on extrajudicial killings. Shahidul Alam/Majority World/REX/Shutterstock

Alam also co-founded Drik, a photo agency in Bangladesh, to give local photographers a way to tell their story instead of leaving it to outsiders.

The idea came in 1989, when Alam was staying in Belfast, Northern Ireland, and a little girl was surprised because he had coins in his pocket.

“She was incapable of seeing a Bangladeshi as anything other than an icon of poverty,” Alam said. “And that got me thinking about how people portray the social and cultural environment that this little girl was growing up in that that was the only identity she could give to someone who is from Bangladesh. And I felt I needed to challenge that stereotype.”

Alam took that concept and expanded it to showcase local photographers in Asia, Africa, Latin America and the Middle East. 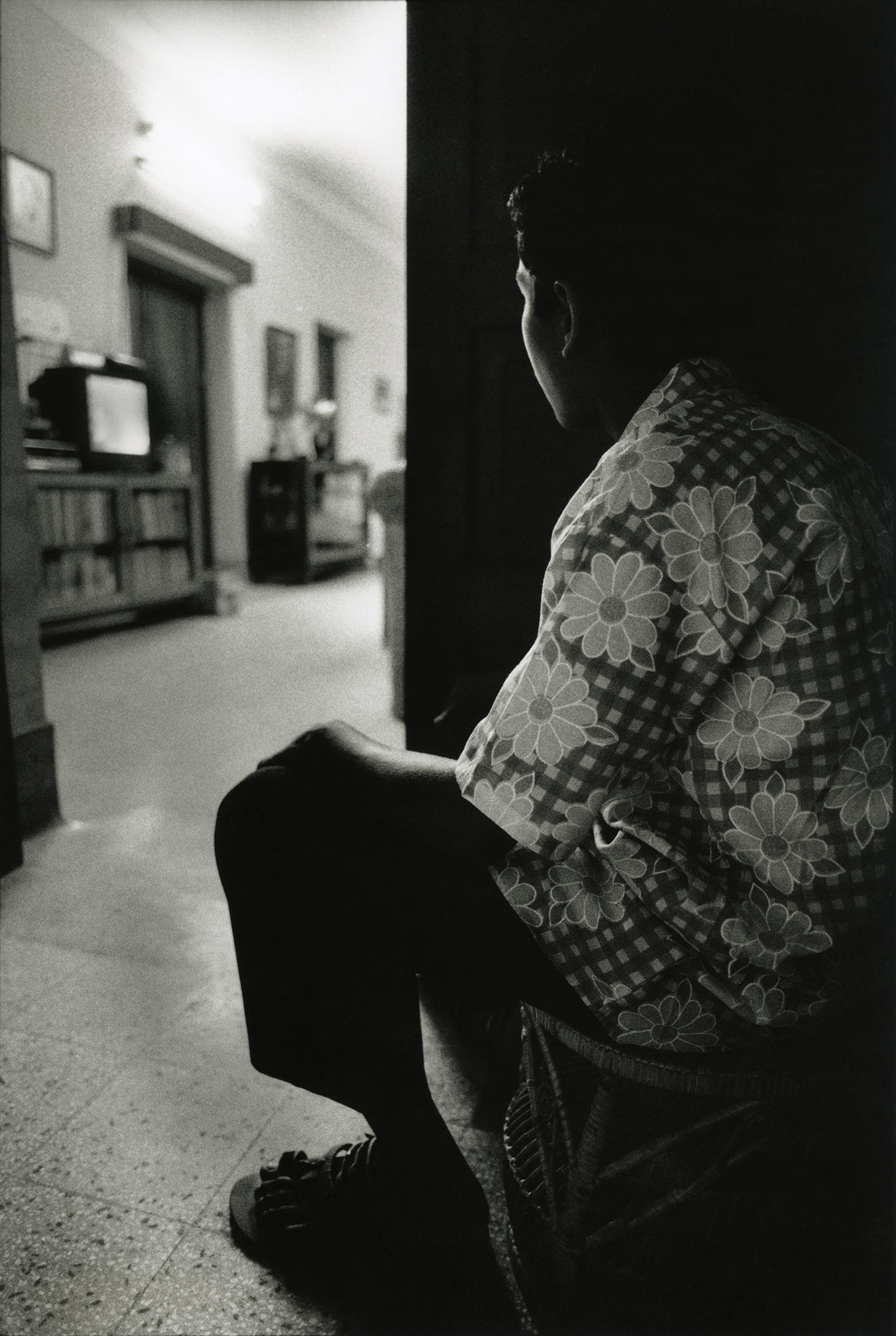 A young boy named Mizan watches television at the home of Alam’s mother in the 1990s. “He used to clean the room where we watched television,” Alam said. “But he would sit outside the room that we watched TV, to watch himself. And while it's technically not very far away, in social and cultural terms there is a chasm between us.” Alam published this in a calendar and he said it changed his life, his mother’s life and Mizan’s life. “The following day, Mizan sat inside the room to watch television with us. To me, it's a very significant moment. … We talk of these sweeping changes, global changes, that photography can do. We forget that on a personal level, change is also important.” Shahidul Alam

“I felt that perhaps the world needed to be reminded that we were the majority of humankind, and that we should be known for who we are rather than what we lack,” he said.

While Alam fights his legal case in court, he continues to receive plaudits from around the world. The International Center of Photography honored him this month with its prestigious Infinity Award, and his work will be showcased later this year at the Rubin Museum of Art in New York. It will be his first US retrospective, covering his career over four decades.

“While I was in jail, I could see what happens to people who are incarcerated, the fact that many of them were not in a position to even fight for the rights they had,” Alam said. 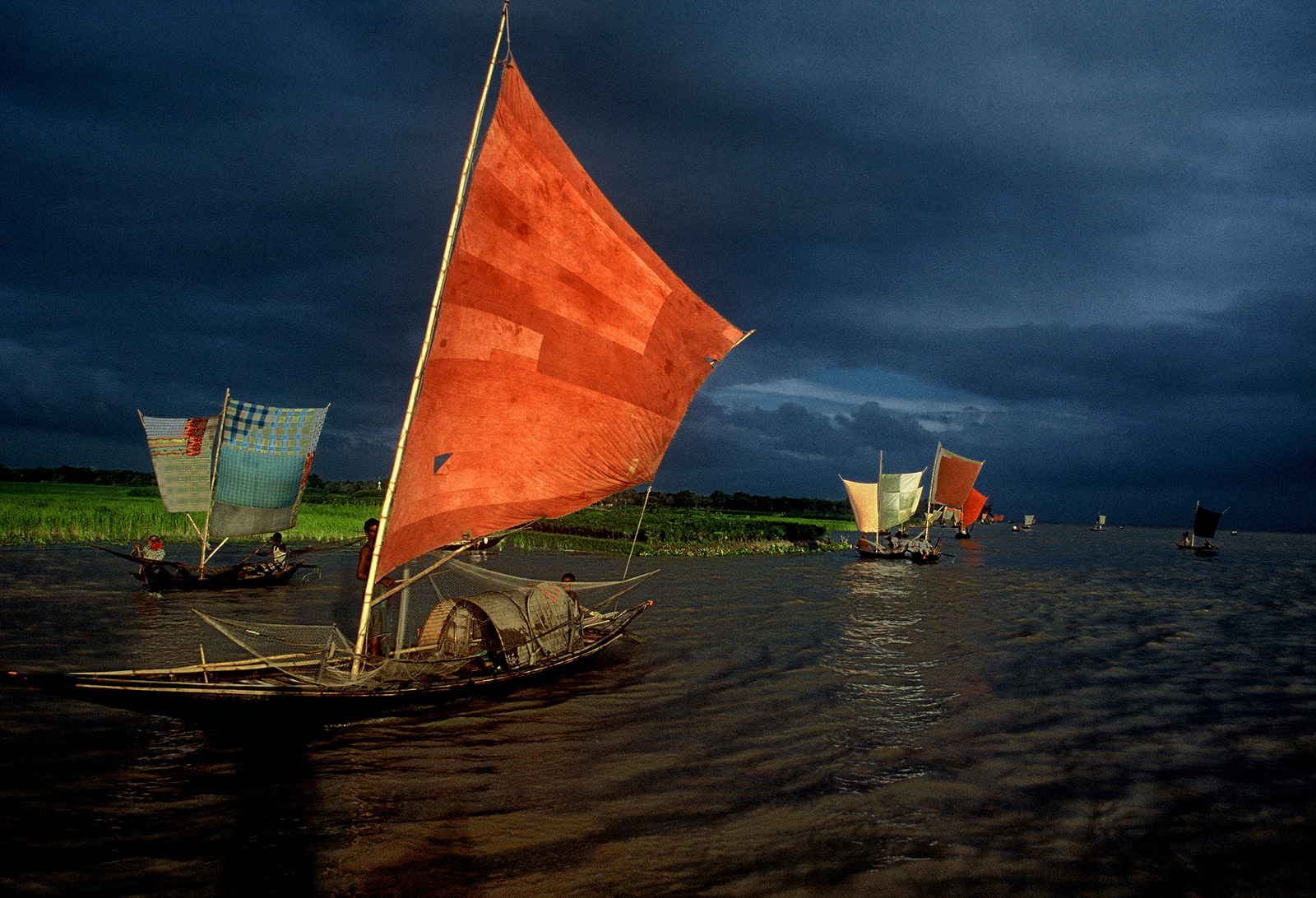 A small fishing boat sails in the Padma River in Daulatdia, Bangladesh. This is one of Alam’s favorite photographs, and prisoners in Dhaka recently painted a mural of it inside their jail. “That, for me, is the finest publication I've ever had,” he said. Shahidul Alam

He was honored, he said, when the prisoners chose to paint a mural of one of his favorite photos, a beautiful sun-lit sailboat in the Padma River.

The country ranks 146th in the most recent World Press Freedom Index, and the Prime Minister was re-elected to a third term following a disputed landslide election in December. 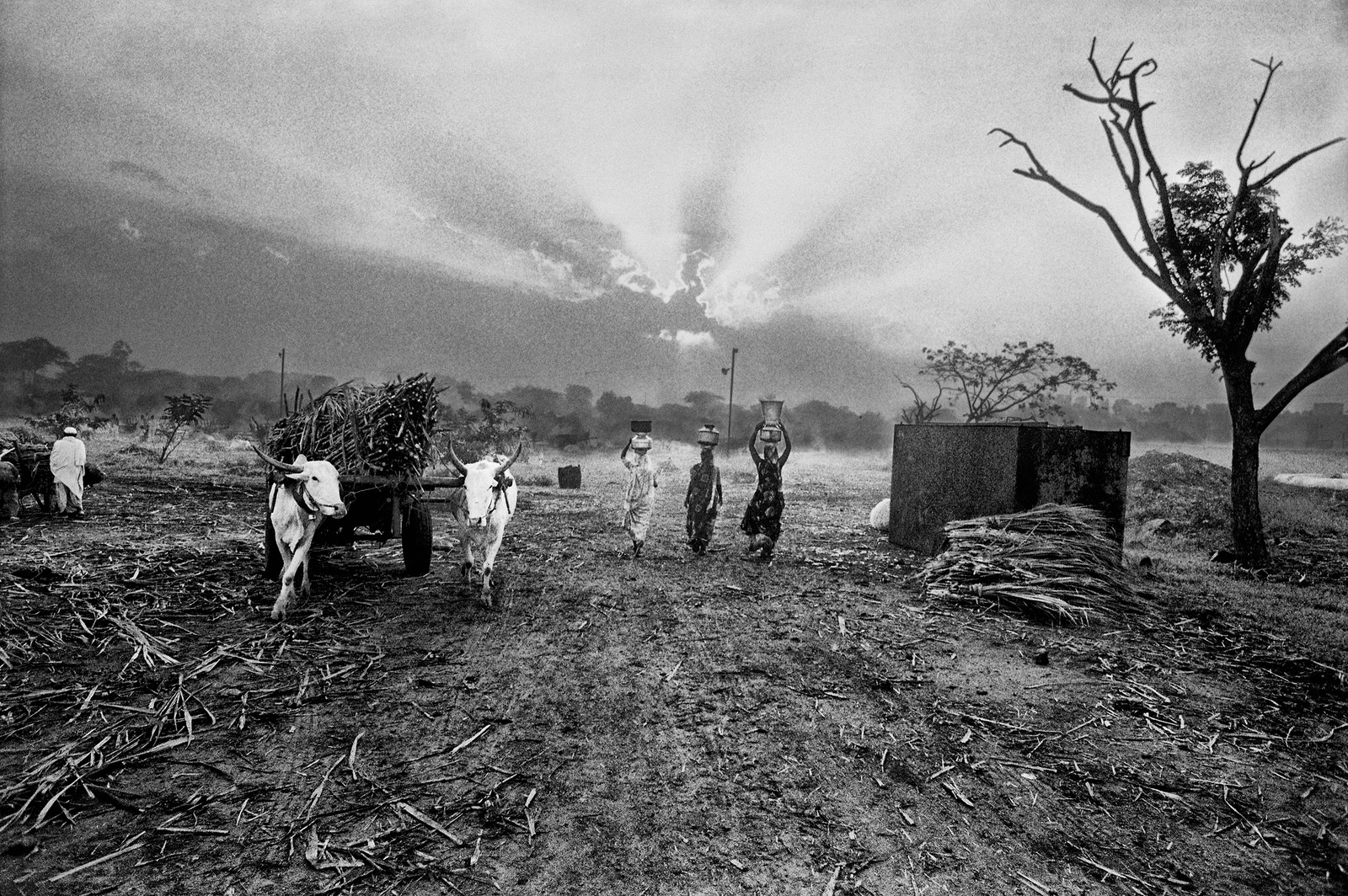 This photo, taken by Alam, shows women in Aurangabad, India, fetching drinking water. “These are sugar cane fields where migrant laborers work,” he said. “They come mostly from Rajasthan. They come over and work largely as bonded labor. And the toxic effluent from the factory means that the water body in that area is not drinkable. So the women need to go far away to get water for their own consumption.” Shahidul Alam

But Alam said he is still hopeful about the future.

“I continue to believe that my people will resist,” he said. “One of the things that gives me hope is the fact that when I walk the streets — and I don't do that too often because it's dangerous for me to do — people come up to me, they hug me, they have tears in their eyes and they tell me, ‘You said what we all wanted to say but didn't have the courage to do.’

“So, yes, we will prevail. It might take time and it will require sacrifice, but I'm confident we will get there.” 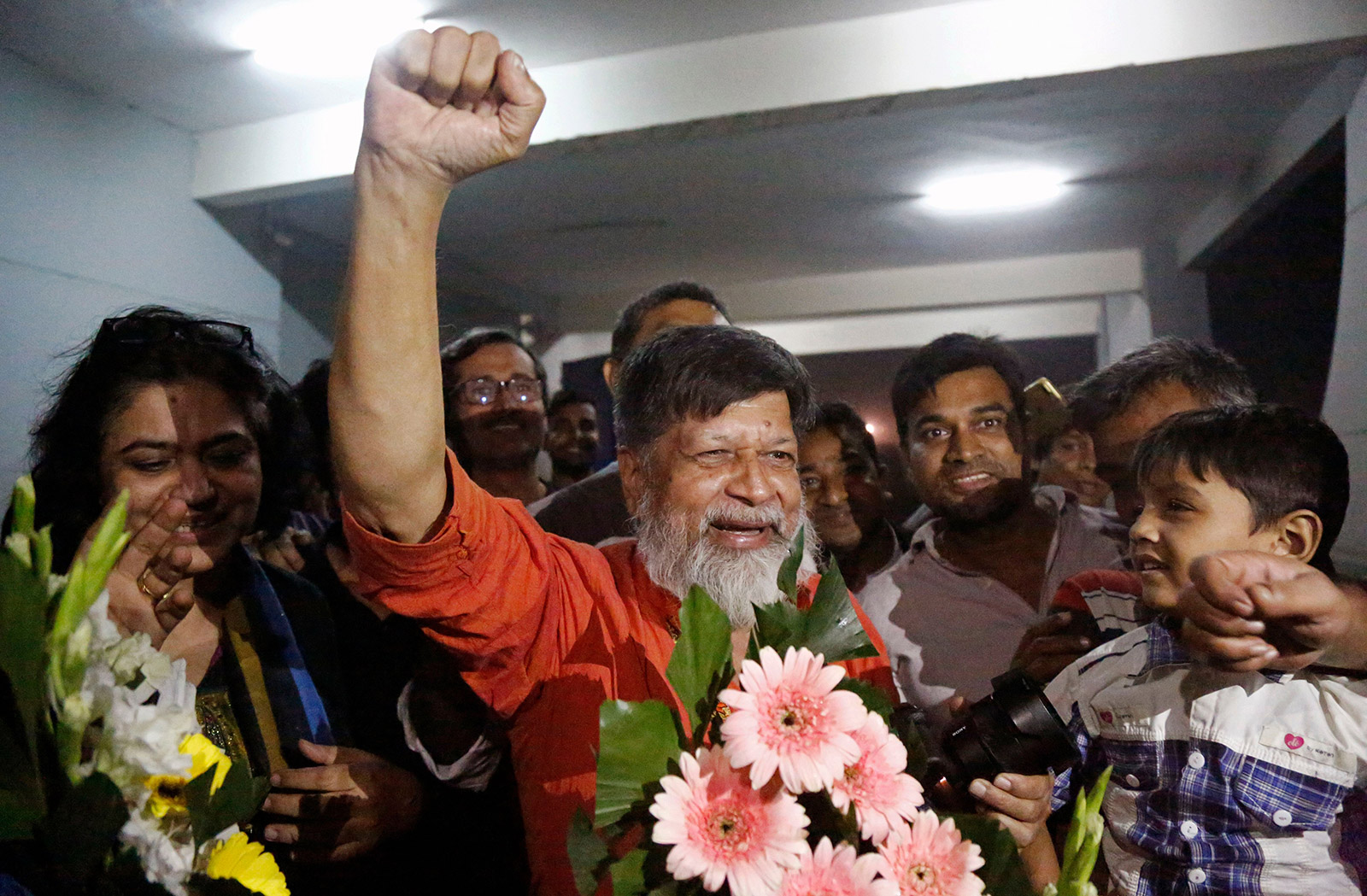 Alam celebrates after being released from jail in November 2018. Monirul Alam/EPA-EFE/REX/Shutterstock