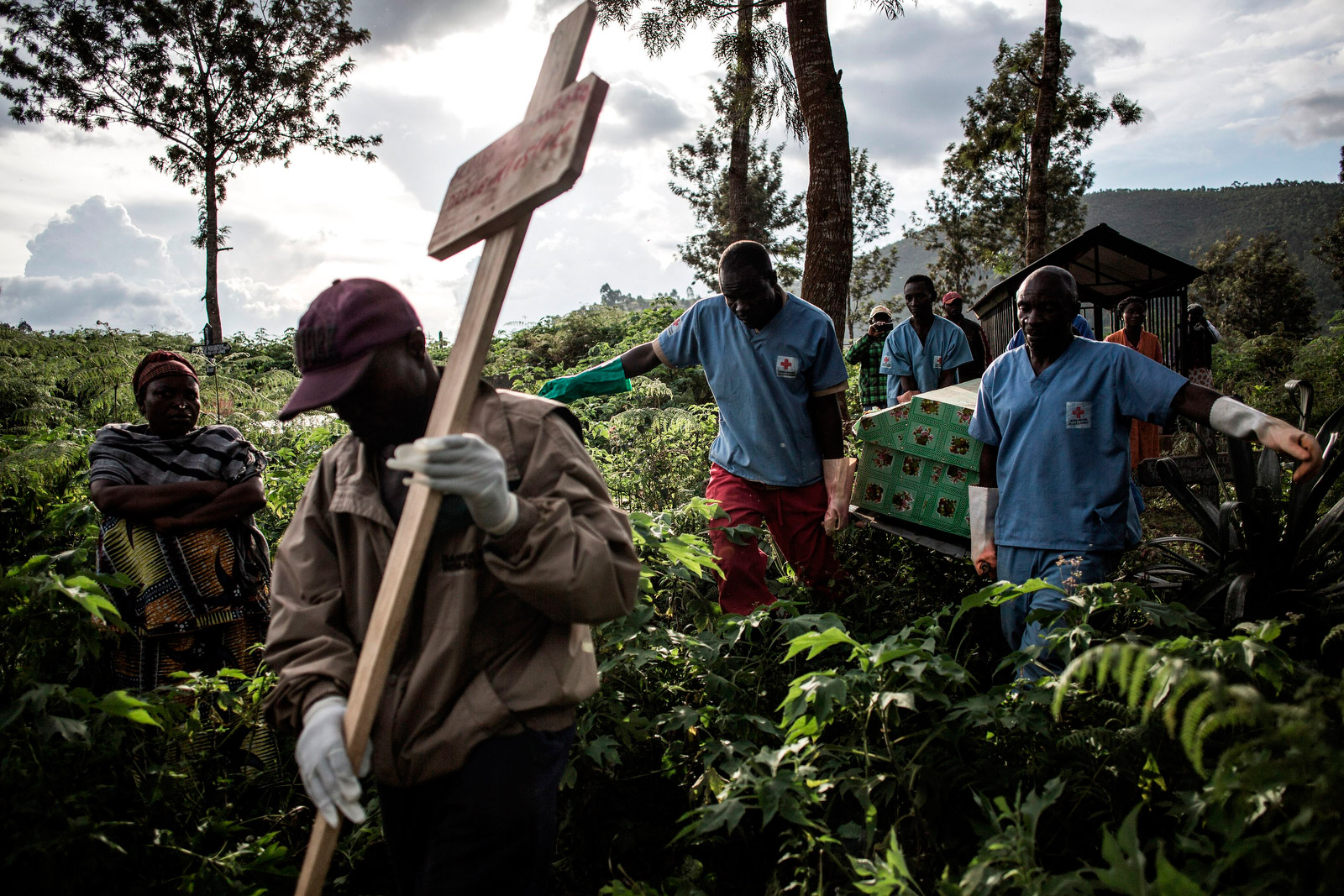 Health workers carry an Ebola victim’s coffin on May 16 in Butembo, a city at the epicenter of the outbreak in the Democratic Republic of Congo.

The Ebola death toll exceeds 1,600. This is what it’s like on the front lines

Health workers carry an Ebola victim’s coffin on May 16 in Butembo, a city at the epicenter of the outbreak in the Democratic Republic of Congo.

Two weeks ago a mother buried her two sons. This week she was buried in the same cemetery.

After her burial, a family member was trying to walk away but couldn’t bring himself to leave.

“He eventually went and stood, arms folded, in front of the victim’s son’s grave, stared at his picture on the cross and looked up four graves over to her grave,” photographer John Wessels said. “He did this for at least 10 minutes. It was heartbreaking.”

The mother and her children are among the more than 1,600 people who have died as a result of the ongoing Ebola outbreak in the Democratic Republic of Congo, according to estimates from the World Health Organization. 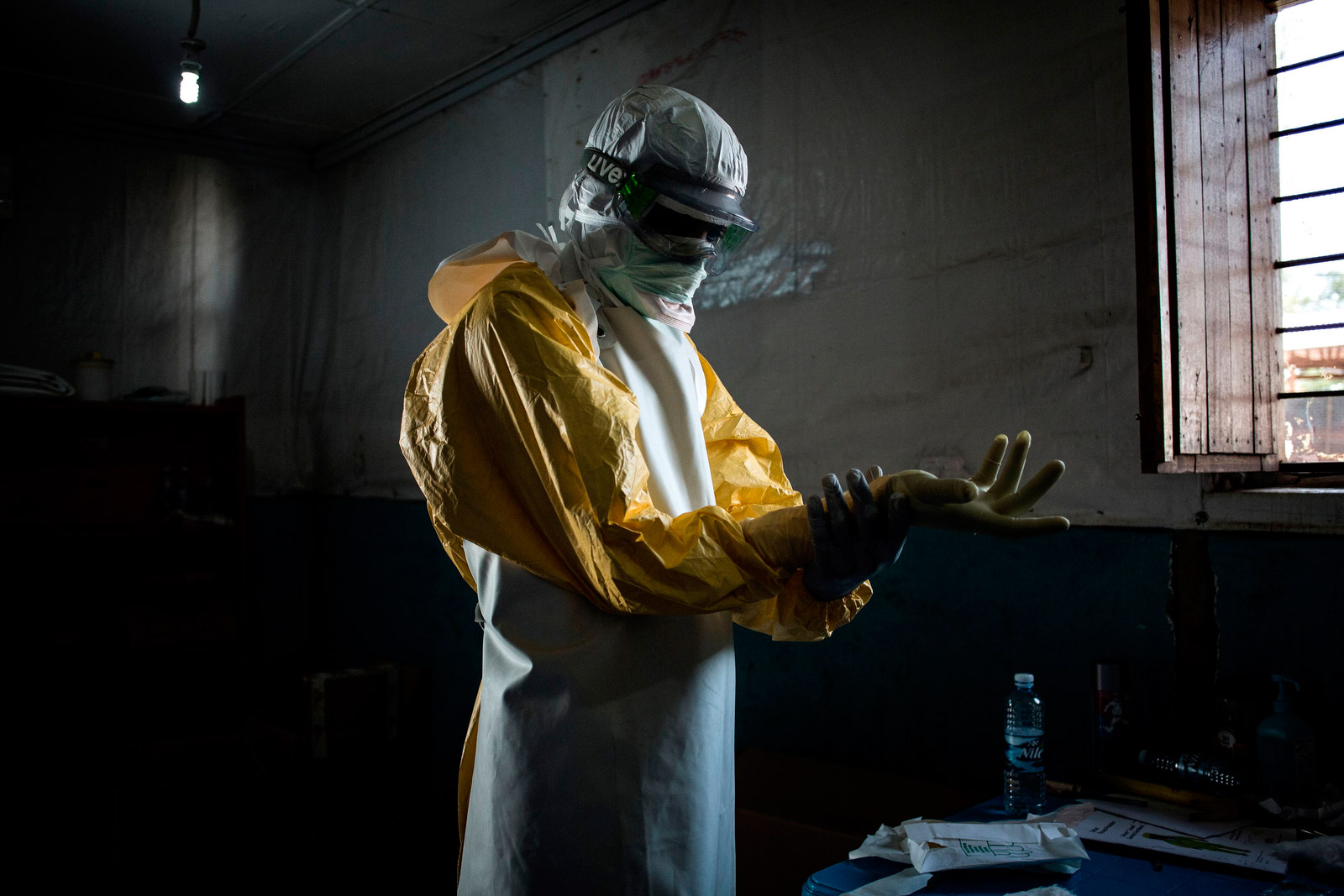 A health worker puts on protective gear before entering the red zone of an Ebola treatment center in Bunia on November 6. 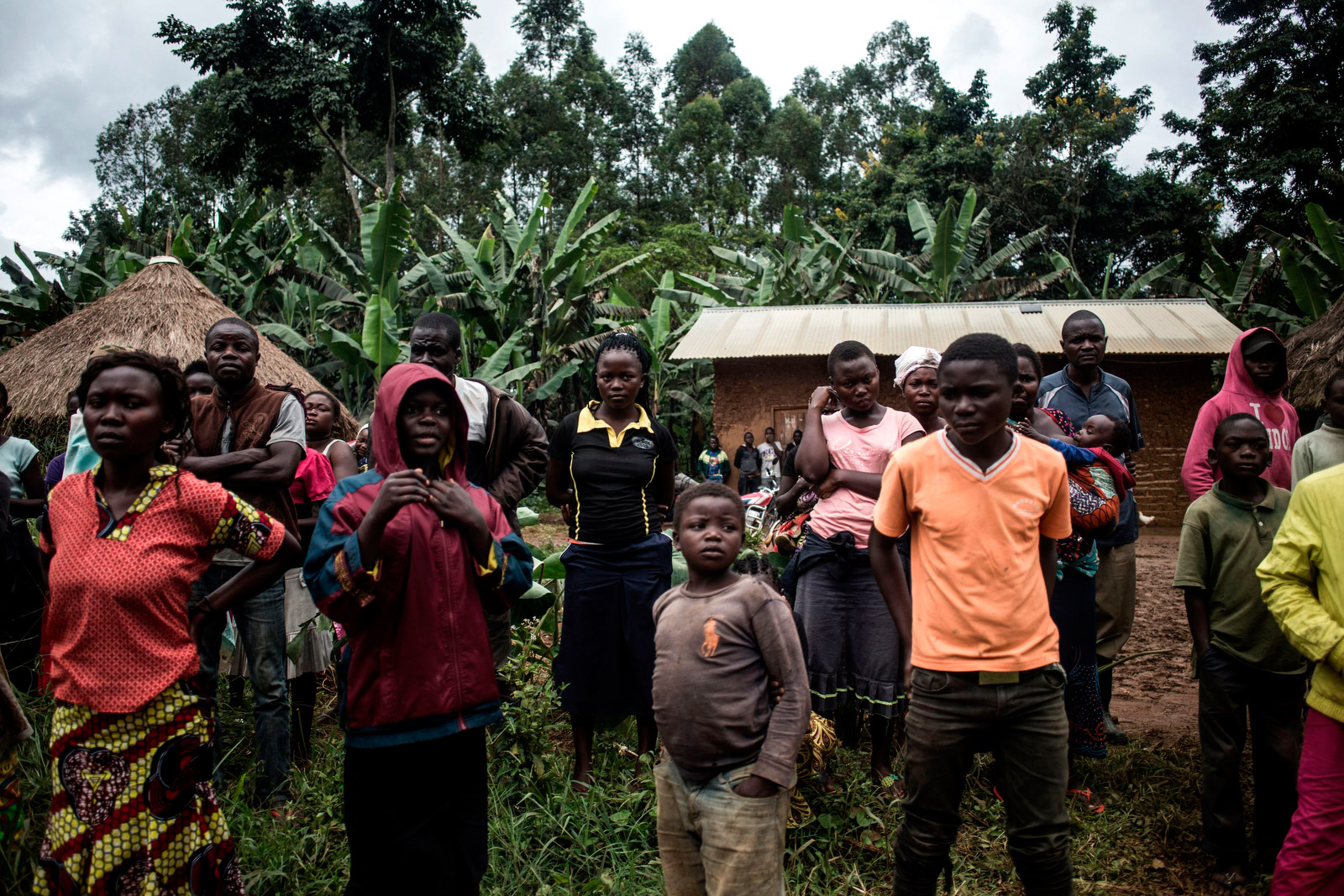 Community members along the road from Beni to Mangina watch from a distance as health workers collect the body of a suspected Ebola victim on August 23. They also watched the workers disinfect the house and burn mattresses, “a very confusing and shocking scene to watch,” photographer John Wessels said.

The current Ebola outbreak began last summer in the country’s North Kivu province and now constitutes a public health emergency of international concern, WHO announced on Wednesday, July 17. This is only the fifth declaration of its kind in the organization’s history.

The region is also grappling with a long-term conflict and dozens of armed groups causing intermittent violence. WHO has received additional support from the United Nations and local police to protect treatment centers.

“The displacement of people due to these attacks makes it harder for the (Ebola) response to be effective,” Wessels said. “It also means that some days the response is shut down due to insecurity and fighting in the area. All of this adds up to make it a highly complex and stressful environment for community members and doctors alike.” 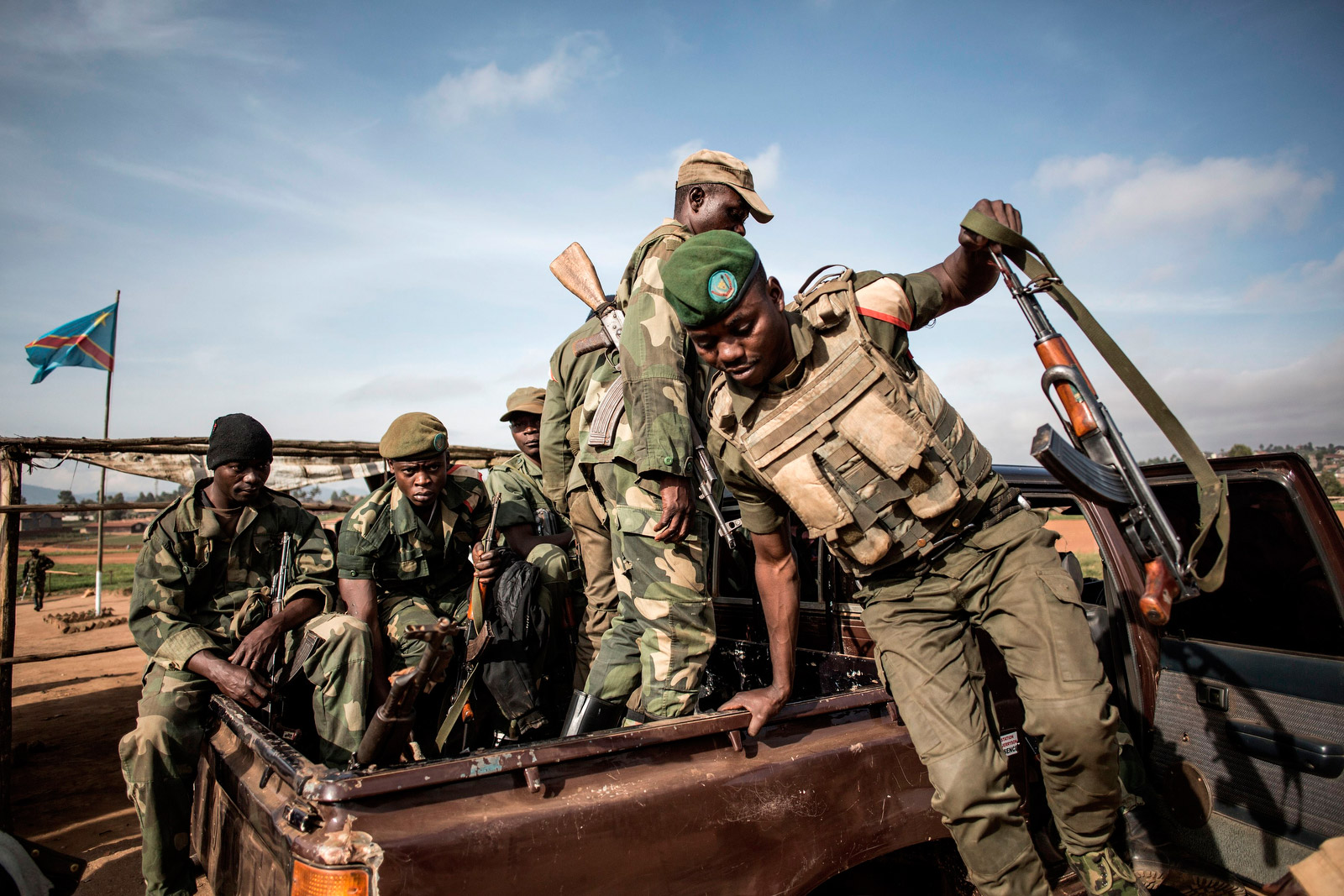 Soldiers of the Armed Forces of the Democratic Republic of the Congo (FARDC) prepare to escort health workers attached to Ebola response programs in Butembo on May 18. 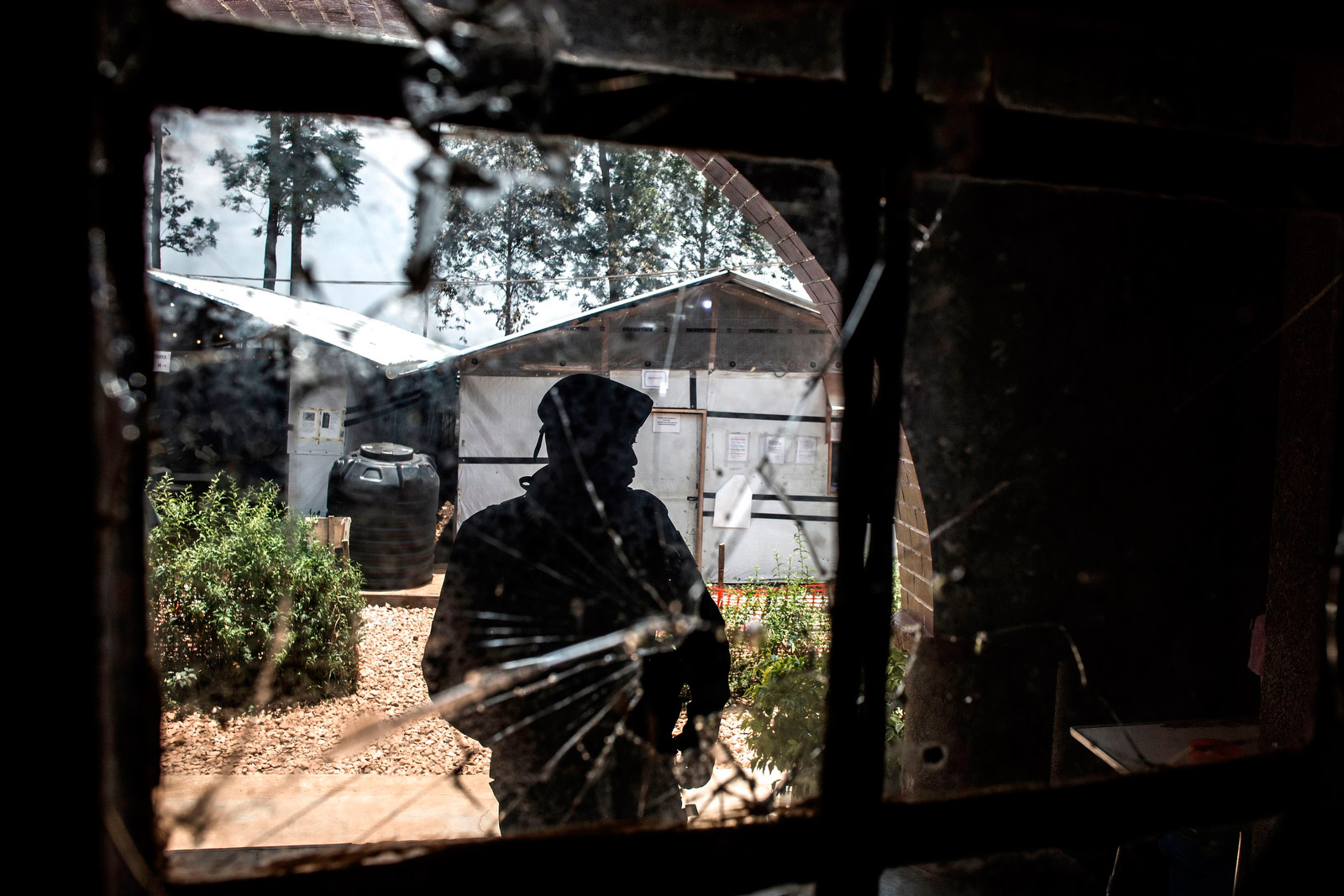 A police officer stands guard in front of a window riddled with bullet holes at an Ebola treatment center in Butembo that was attacked in the early morning hours on March 9. 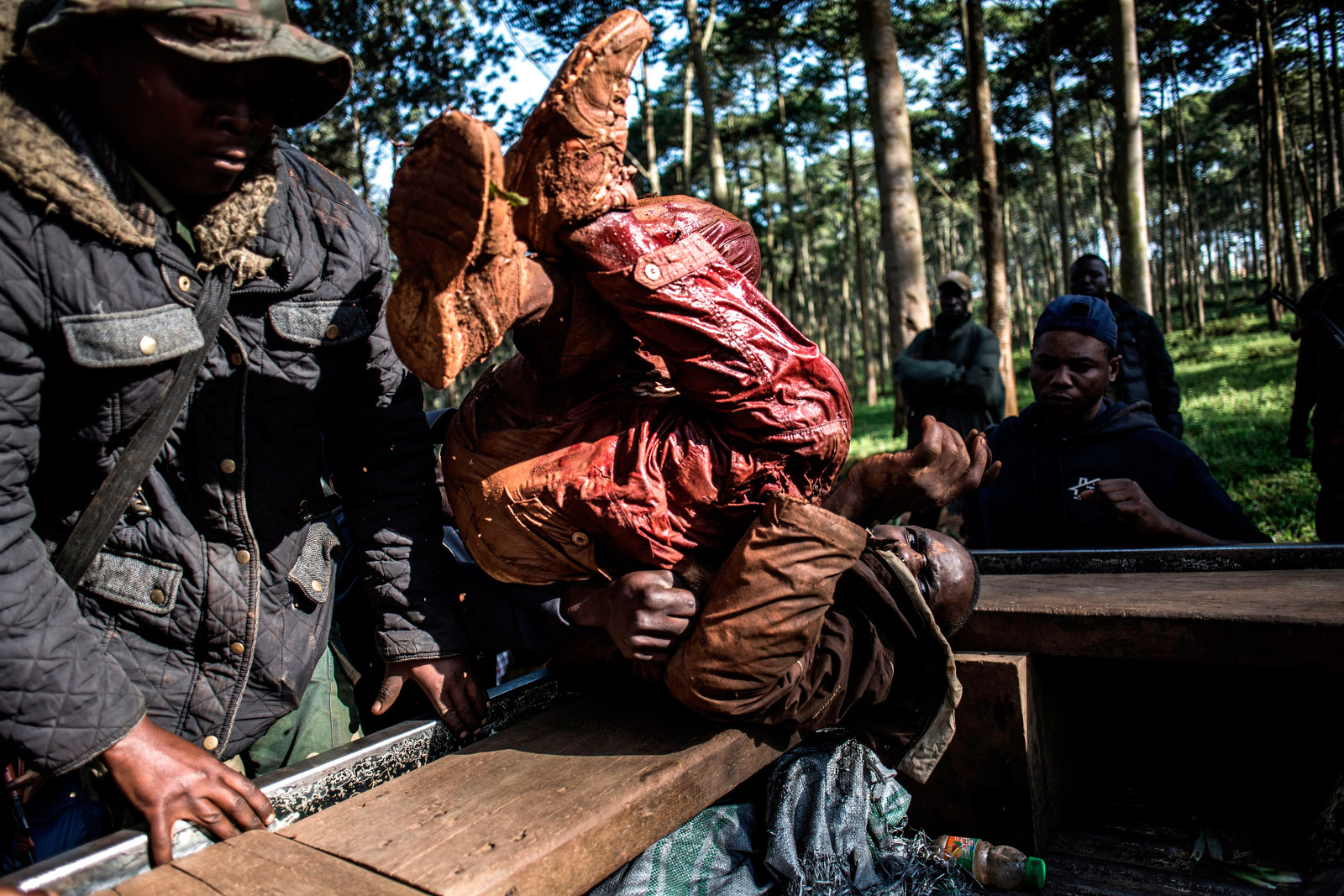 An injured suspected Mai-Mai rebel fighter is thrown into the back of a truck outside an Ebola treatment center in Butembo after the March 9 attack. He was shot in the leg by government forces, Wessels said.

Wessels, a South African photojournalist based in Congo, has been on the ground documenting the crisis since it started in August.

He has witnessed families gutted by the virus and seen entire communities ravaged. “There is a lot of stigma around the disease, and we could not imagine what people affected by it are going through,” he said. “The stress must be overwhelming.”

“The fact that it is now declared a global health emergency really doesn’t change anything on the ground. It is still at the same intensity and is still as dangerous as it was before.” 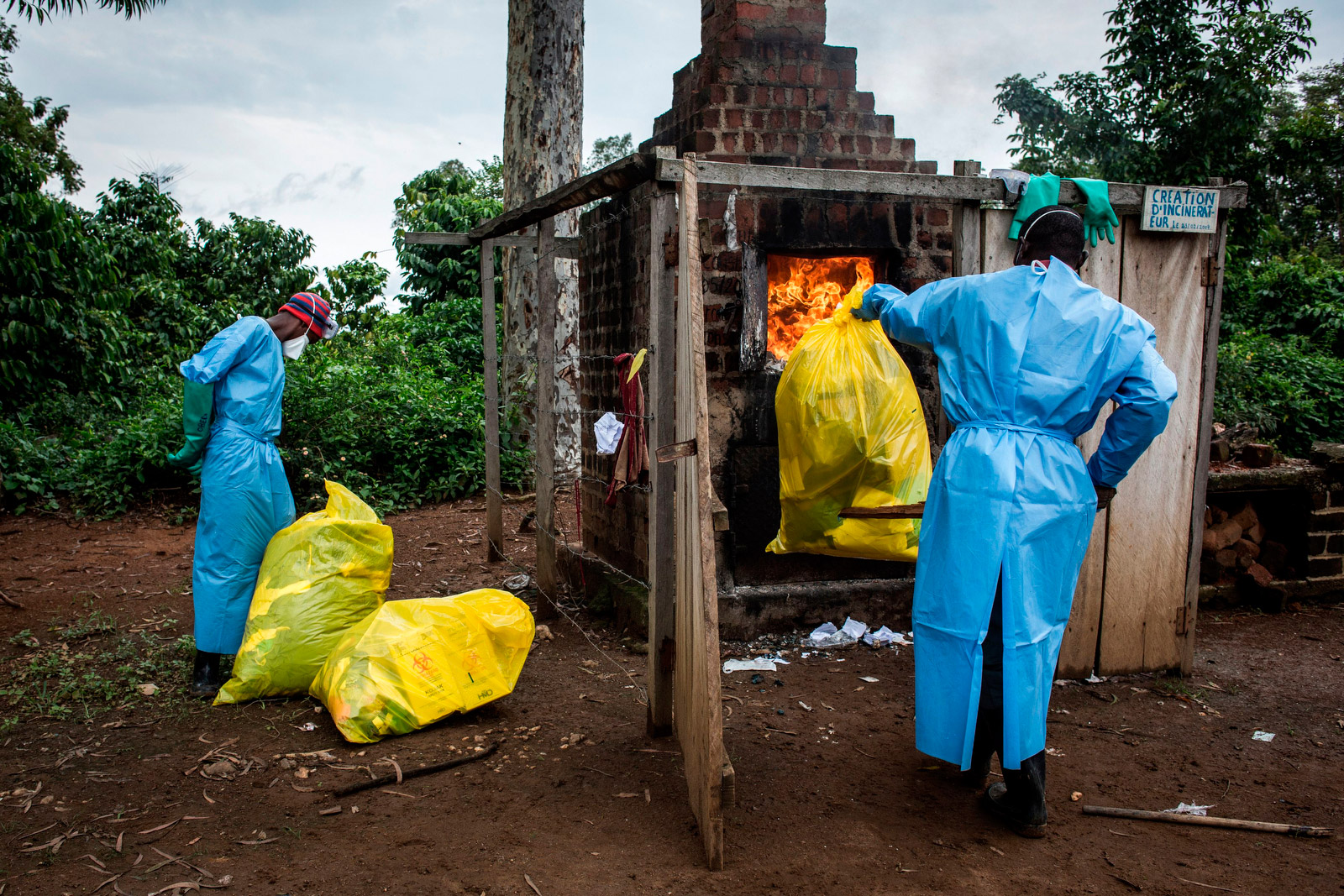 Health workers burn medical waste generated during the care of Ebola patients in Mangina on August 21. 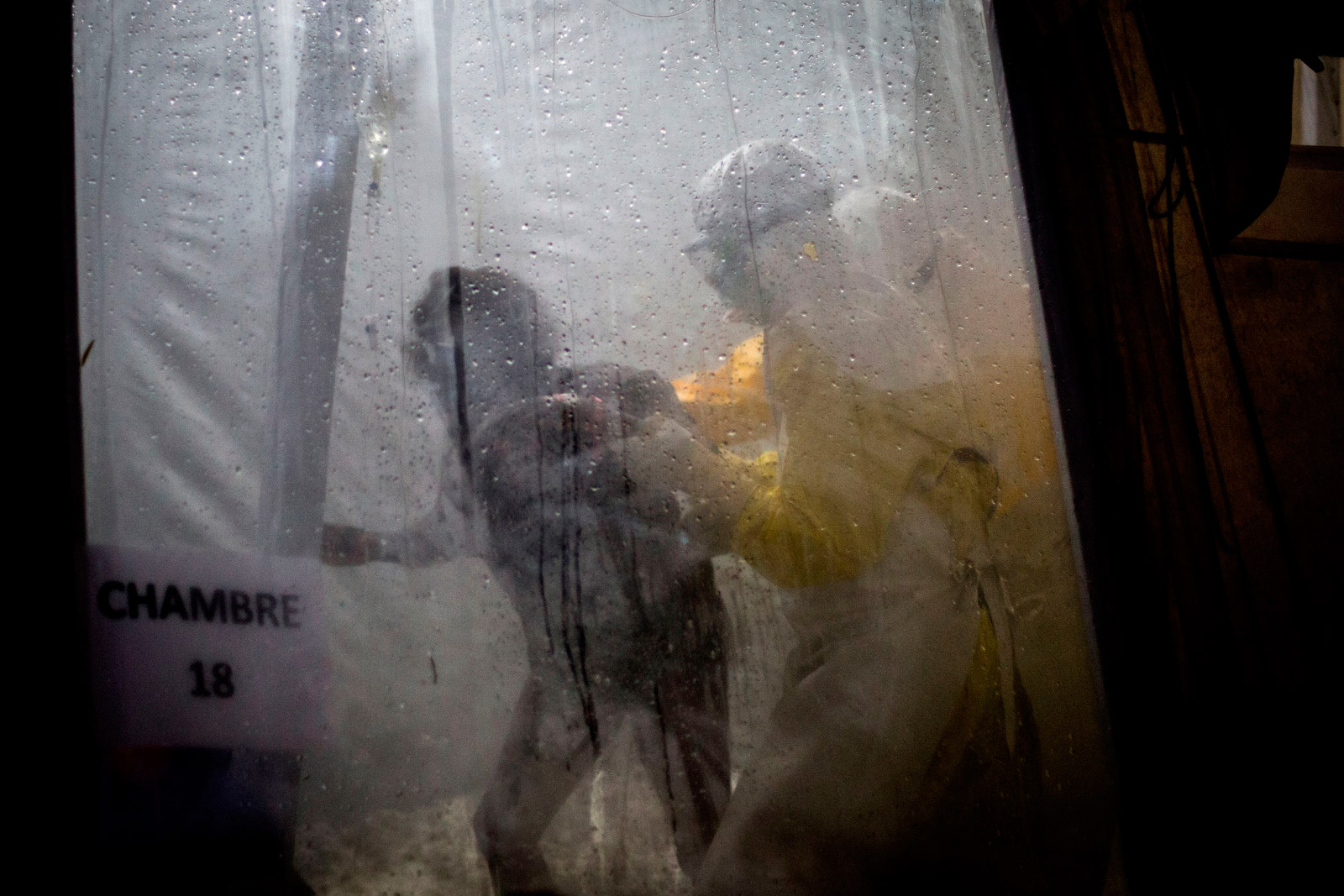 A worker helps an unconfirmed Ebola patient into her bed inside a treatment center in Butembo on November 3. “Health workers and doctors take shifts to watch over the patients,” Wessels said. “Wearing full (protective gear) like that can be very taxing, so sometimes shifts are only up to an hour long or less.” 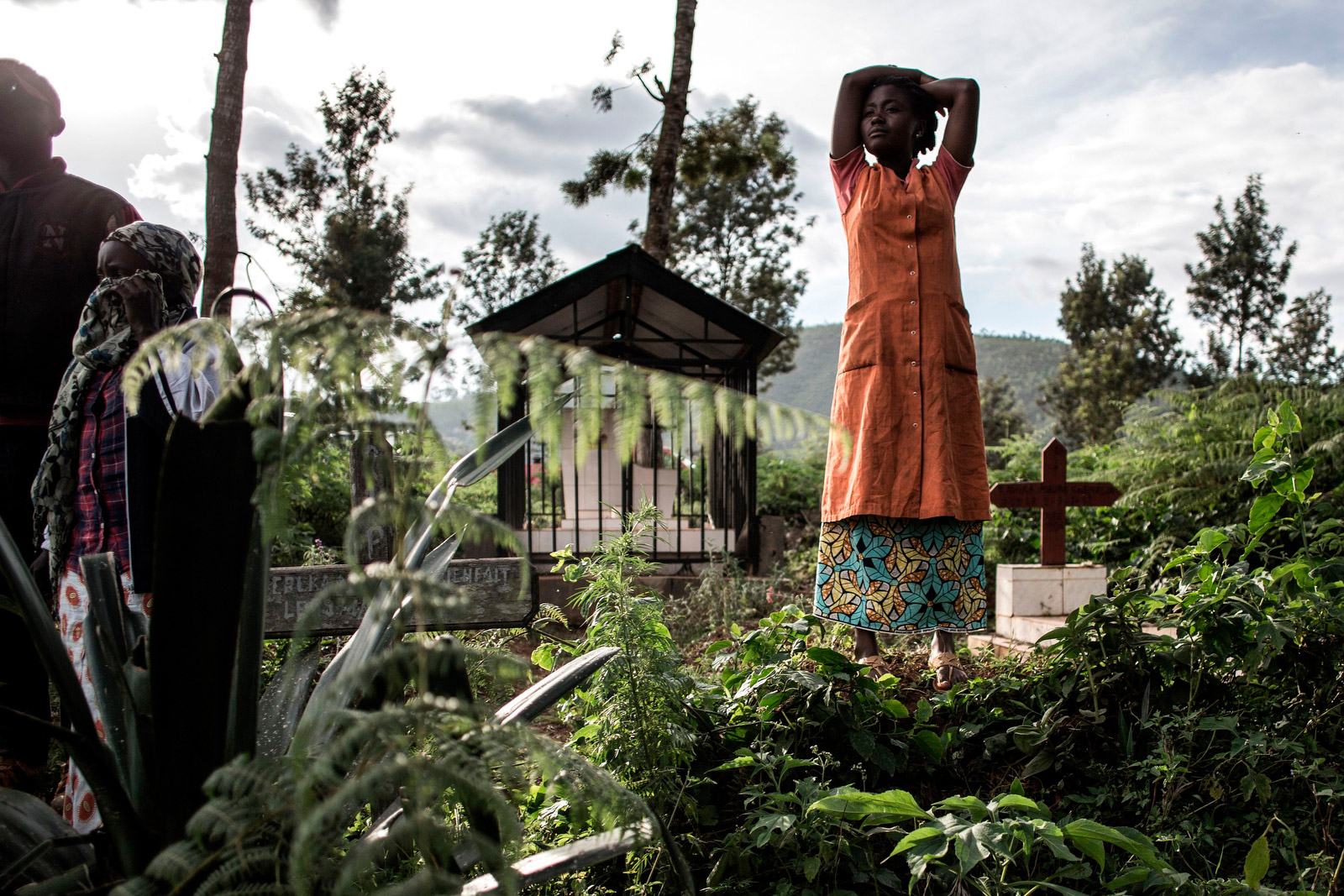 Family members watch an Ebola victim’s burial on May 16 in Butembo. “Burials in the context of Ebola can be complicated as the family can't touch the body and can only view it very quickly,” Wessels said. “This goes against some cultural practices and so there is a lot of anger surrounding how safe burials are performed.”

The Ebola virus first appeared in 1976 in two simultaneous outbreaks, one in what is now Nzara, South Sudan, and the other in Yambuku, Congo. The latter occurred in a village near the Ebola River, from which the disease takes its name.

Ebola is a severe, often fatal illness with an average death rate of 50%. It spreads between humans through direct contact with an infected person's bodily fluids, including infected blood, feces or vomit, or direct contact with contaminated objects, such as needles and syringes.

Despite the danger, Wessels said he doesn’t need to wear protective gear while covering the outbreak. He does, however, follow strict protocols and take precautions to avoid exposure to the virus, like keeping a safe distance from possibly infected zones and washing his hands as often as possible. 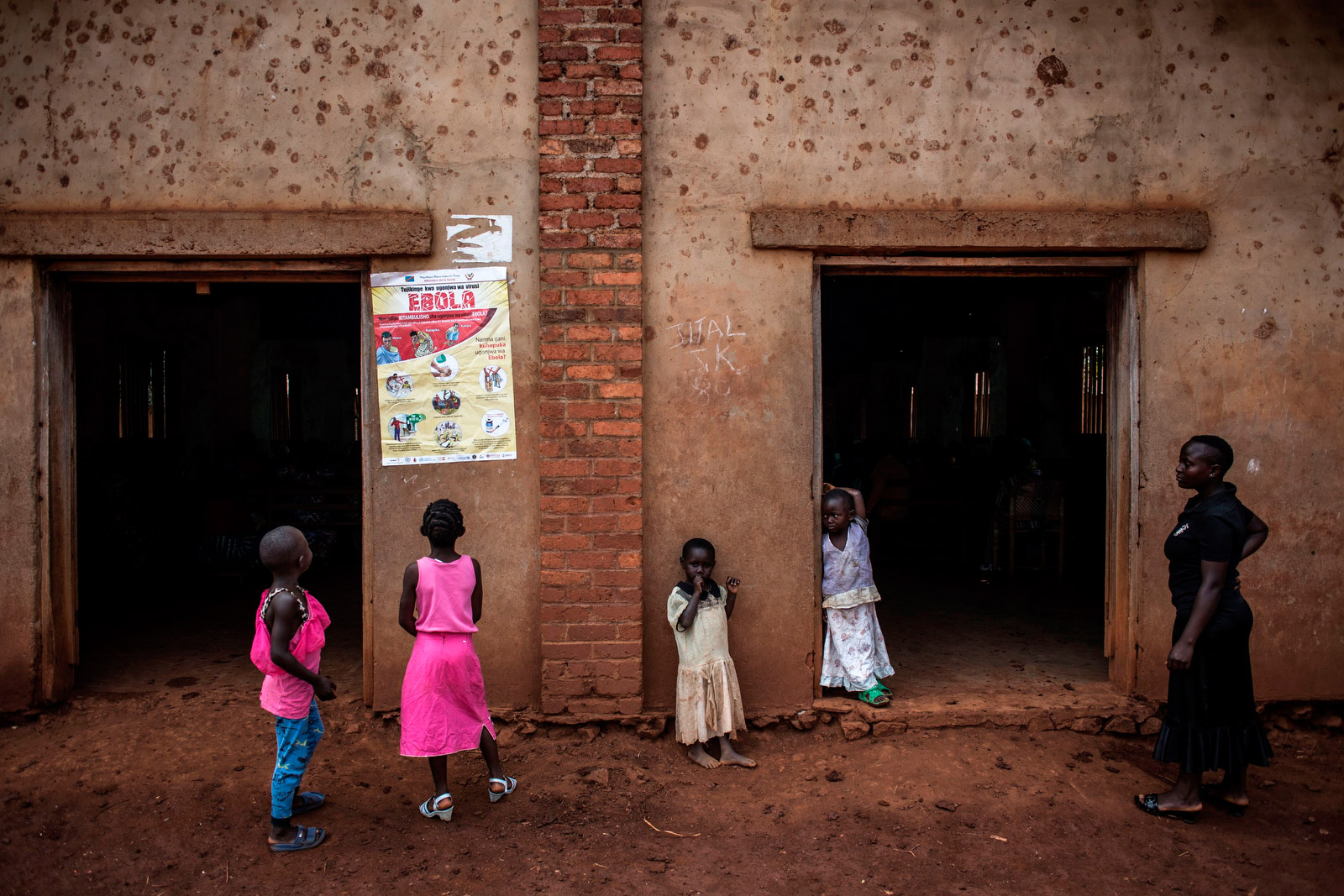 Young girls look at a poster explaining the symptoms of Ebola in Mangina on August 19. 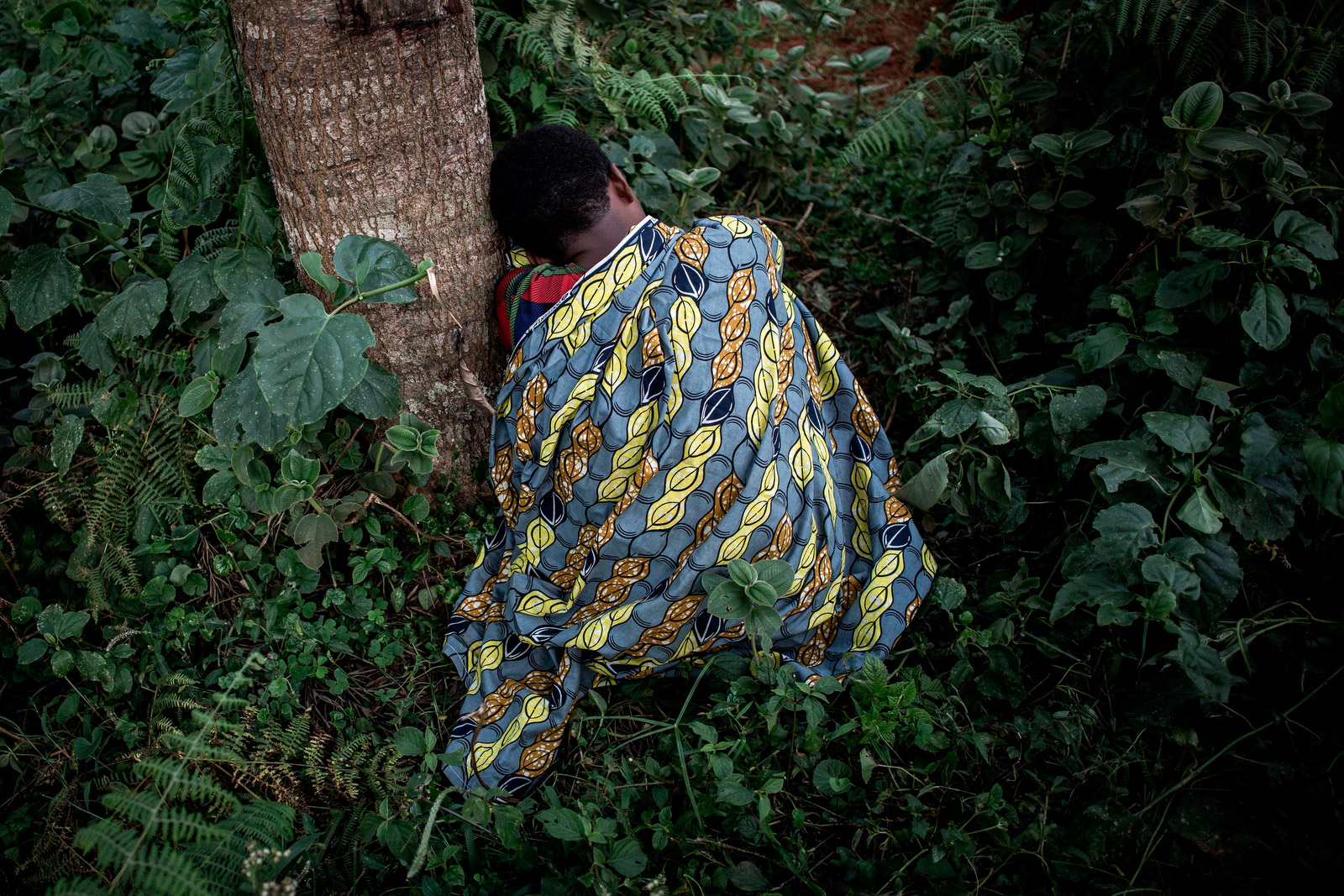 A family member reacts during an Ebola victim’s burial in Butembo on May 16. 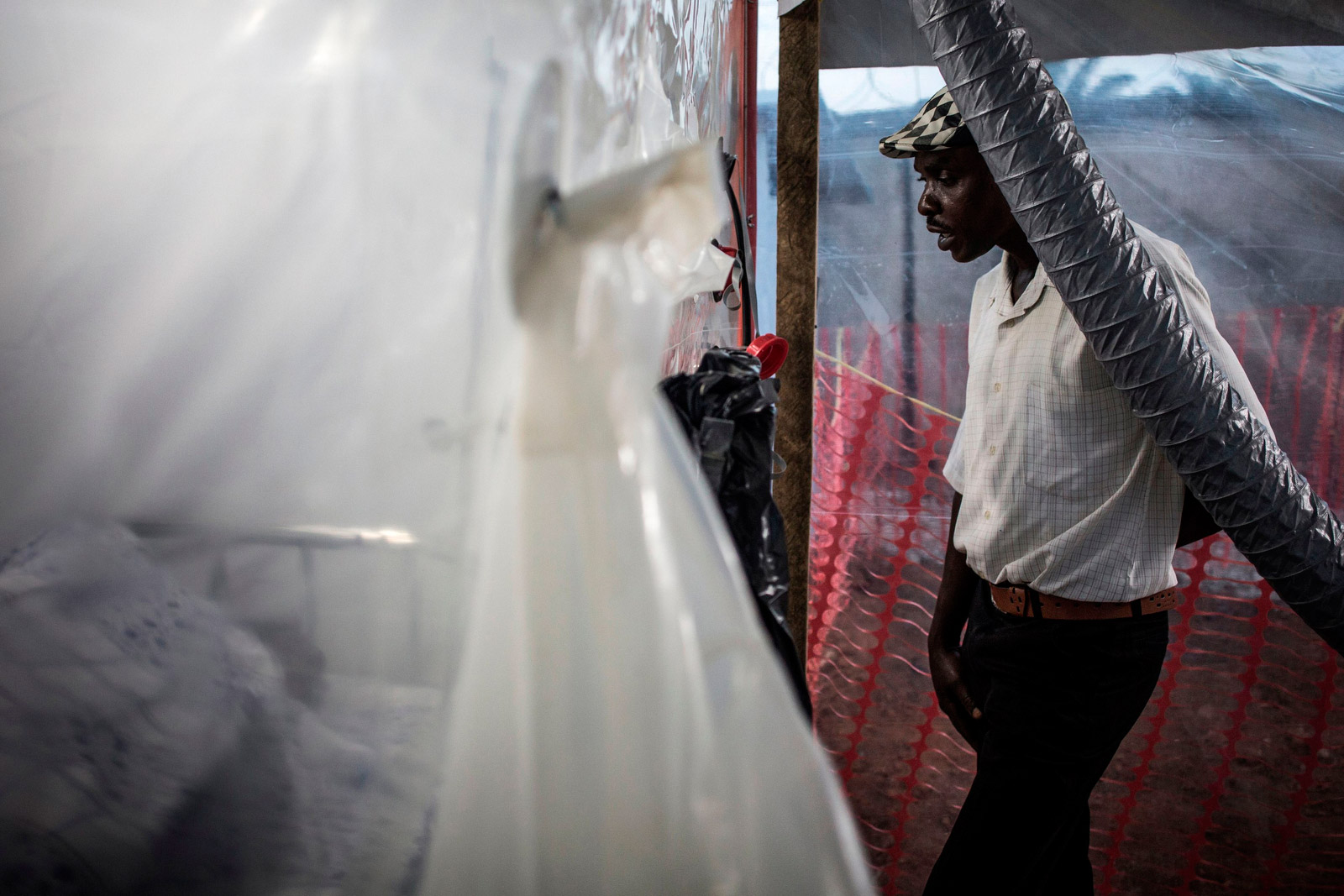 A family member visits an Ebola patient inside a Biosecure Emergency Care Unit (CUBE) in Beni on August 15.

Wessels said he plans to continue covering the deadly disease to get the word out about the human toll on the country he has called home for the past two years.

“I’m hoping the world sees how shocking, stressful and heartbreaking this crisis is for the people of North Kivu,” he said. 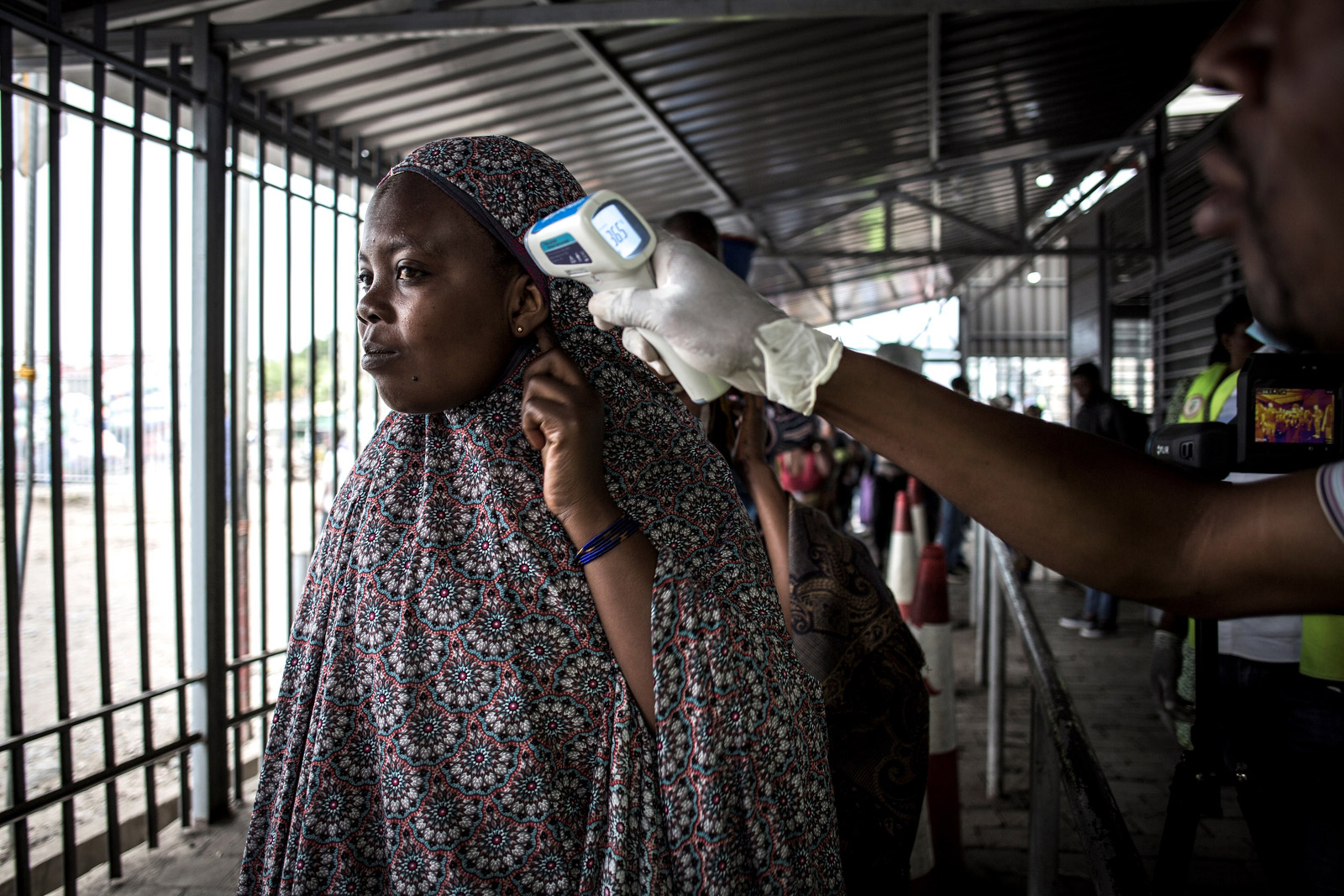 A woman gets her temperature checked on July 16 at an Ebola screening station in Goma as she enters Congo from Rwanda. The first case of Ebola in Goma was recently confirmed, raising fears that the virus could make its way across the border into Rwanda. 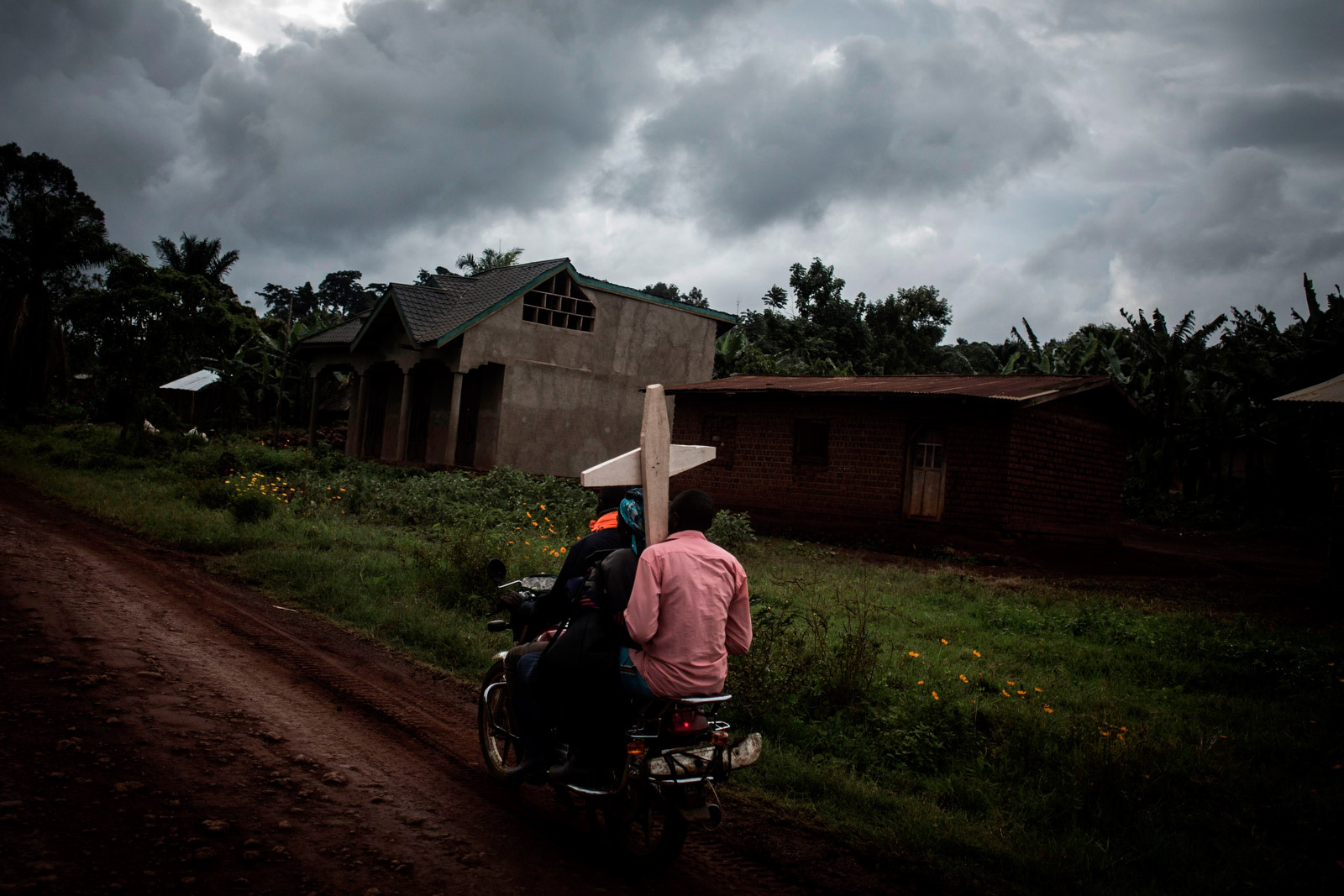 Three people ride a motorcycle and carry a cross for a grave along the road linking Mangina to Beni on August 23. “This scene is something we see often,” Wessels said. “Unfortunately it has become ‘normal’ to see pick-ups with multiple coffins and people carrying crosses to burials in and around the towns.”