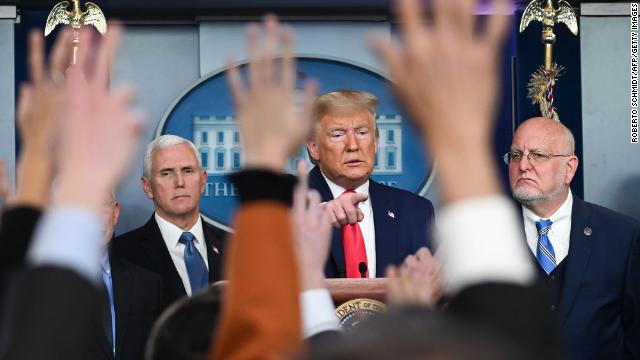 Timeline: How Trump was out of step with the CDC during coronavirus response

Washington (CNN) – President Donald Trump and other White House officials are on the attack against the coronavirus, but also against the President’s critics, who say his administration was slow to respond to the burgeoning pandemic and aren’t doing enough to protect Americans.

At a February 27 press conference meant to reassure the public, Trump seemed to spend more time defending his own actions than explaining what was being done to combat the coronavirus.

“I took a lot of heat,” Trump said about the travel ban he imposed in January, which blocked people who were in China from entering the United States. “Some people called me racist because I made a decision so early… It was a bold decision, and it turned out to be a good decision.”

The next morning, speaking at the Conservative Political Action Conference in Washington, acting White House chief of staff Mick Mulvaney defended the administration’s response, saying, “We took extraordinary steps four or five weeks ago.” He touted the travel ban and the decision to impose the first federal quarantines in more than 50 years.

By the end of February, Trump and administration officials started shifting their tone. They spoke about the expected uptick in cases and Trump backed away from his comment that concerns about the virus were a “hoax” peddled by Democrats to help them at the polls this November.

A close examination of the timeline from the past two months reveals how US health officials took active steps to deal with the crisis as information trickled out of China, a country led by an authoritarian government that has been criticized for its censorship and handling of the crisis.

Regardless, with the available information, US health officials from the Centers for Disease Control and Prevention took bold steps to prepare for the outbreak. Members of Trump’s Cabinet also got involved and started briefing lawmakers, though much of the action on Capitol Hill was focused on impeachment – which Mulvaney pointed out in his remarks at CPAC.

While public health officials and medical experts rightly raised the alarm, Trump downplayed their concerns and injected controversial and unproven theories into the conversation. Throughout his presidency, Trump has undermined and contradicted public statements from other senior US officials, but never before about life-or-death issues like a possible pandemic.

Here’s a breakdown of the relevant statements and actions by Trump, career US officials involved in the response, public health authorities in China and others around the world.

Health officials in Wuhan, China, post a notice that says they’re investigating a pneumonia outbreak that is spreading in their city. The World Health Organization (WHO) acknowledges that it “was informed of a cluster of cases of pneumonia of unknown cause.”

The Centers for Disease Control and Prevention (CDC) publishes a health advisory regarding the “pneumonia of unknown etiology” that appears to have originated in Wuhan.

The CDC dispatches more than 100 staffers to three US airports to screen passengers arriving from Wuhan, a highly unusual step only taken during major health crises.

Dr. Nancy Messonnier, a senior CDC official handling the response to respiratory diseases, tells reporters, “We do expect additional cases in the United States and globally.”

At the World Economic Forum in Davos, Switzerland, Trump says he isn’t worried that the outbreak could turn into a global pandemic, and said he is confident that China is being transparent about the number of cases. “We have it totally under control,” Trump told CNBC. “It’s one person coming in from China, and we have it under control. It’s going to be just fine.”

CDC advisers tell CNN they are concerned that Chinese health officials haven’t released basic epidemiological data about the virus, making it more difficult to contain the outbreak. Questions remain about how quickly people with the infection become contagious.

Senior officials from the CDC brief senators about the latest developments about the virus. Later, Trump posts his first tweet about the coronavirus. He praises the Chinese government for its “transparency” handling the outbreak and says, “it will all work out well.”

The WHO says there are more than 1,000 confirmed cases worldwide.

Chinese government health officials reveal for the first time that people who are infected with the coronavirus can spread the disease before they are showing any symptoms.

The White House announces a coronavirus task force, which is led by Health and Human Services Secretary Alex Azar and is being coordinated through the National Security Council. Trump attend a meeting of the task force and tweeted that the experts “are on top of it.”

The World Health Organization declares a public health emergency of international concern. The State Department announces a “do not travel” warning for China due to the virus.

The Trump administration declares a public health emergency in the United States because of the coronavirus and blocks foreigners who visited China from entering the country. (In the following weeks, Trump complained that he didn’t get enough credit for this decision, which he claimed was a turning point in preventing a large-scale outbreak in the United States.)

This same day, about 200 Americans are evacuated out of China and flown to a military base in California, where they are quarantined. Messonnier, the top CDC official, says the drastic move was necessary because “we are facing an unprecedented health threat” from coronavirus.”

The WHO says there are more than 10,000 confirmed cases worldwide.

Azar and Mulvaney brief lawmakers on Capitol Hill. A week later, Mulvaney criticized the low turnout, saying only “five senators” and about a dozen House members showed up.

The WHO says there are more than 25,000 confirmed cases worldwide.

Trump speaks with Chinese President Xi Jinping. Later, Trump tweets that China “will be successful” in stopping the coronavirus, “especially as the weather starts to warm & the virus hopefully becomes weaker, and then gone.” Scientists and public health experts swiftly reject Trump’s outlook and say it’s too early to know how the weather will impact the virus.

At a political rally in New Hampshire, Trump mentions the coronavirus and says it “looks like, by April, you know, in theory, when it gets a little warmer, it miraculously goes away.”

CDC Director Dr. Robert Redfield contradicts Trump’s predictions in an interview with CNN, saying the coronavirus “is probably with us beyond this season, beyond this year.”

The WHO says there are more than 50,000 confirmed cases worldwide.

The WHO says there are more than 75,000 confirmed cases worldwide.

The White House requests $2.5 billion to deal with the coronavirus emergency.

Trump tweets, “The Coronavirus is very much under control in the USA.”

Messonnier, the CDC official, says it is inevitable that the coronavirus will spread in the US and that Americans need to prepare for disruptions to their daily lives.

Trump tells reporters during his trip to India that the virus is “a problem that’s going to go away.”

At a White House press conference, Trump defends his administration’s response to the coronavirus but also contradicts the assessment from the CDC that the virus will definitely spread throughout the US. Trump says, “I don’t think it’s inevitable. I think that there’s a chance that it could get worse, a chance it could get fairly substantially worse, but nothing’s inevitable.”

The WHO says there are more than 82,000 confirmed cases worldwide.

Health officials in Washington state announce the first coronavirus death inside the United States. The patient was a man in his 50s who had underlying health problems. The Trump administration also issues new travel warnings for South Korea, Iran and Italy, where the outbreak has been particularly strong.

Trump struck a more measured tone at a White House press conference, where he conceded that “additional cases in the United States are likely.” He also asked the press and politicians “not do anything to incite panic because there’s no reason to panic at all.”