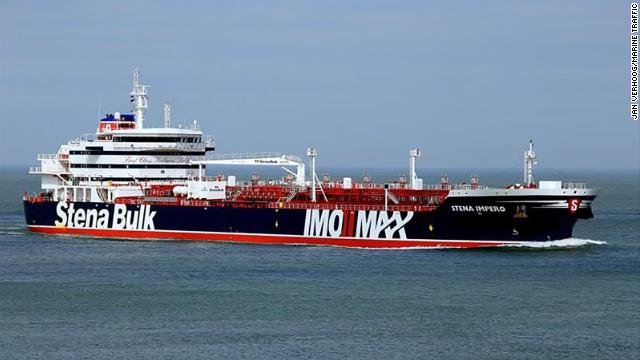 Iran seized one British tanker and stopped another in the Strait of Hormuz Friday, according to Iran's Islamic Revolutionary Guard Corps and US officials. They said the ships were "violating international regulations."

One ship, the MESDAR, has since been allowed to continue its course after Iranian officials followed up with the ship on its environmental regulations, according to Iranian military officials. It is no longer in Iranian waters.

"This only goes to show what I'm saying about Iran. Trouble. Nothing but trouble," he said. "It goes to show you I was right about Iran."
He also noted the "US has very few tankers going in because we’re using a lot of our own energy," but said the American presence in the region was still robust.

President Trump has privately adopted a more hawkish tone on Iran in recent days, according to three people familiar with the developments, as tensions increase in the Gulf.

Previously, Trump emphasized finding a diplomatic solution to the crisis with Tehran, and backed off a planned strike on Iranian positions last month. During those discussions, Trump expressed concern that US retaliation could escalate the tensions in the region. He ultimately pulled back from the strikes citing concern over civilian casualties.

But amid the most recent tensions, Trump has not placed as much emphasis on talks with Iranian officials, according to the people familiar with the matter. That’s due in part to a chilly reception Trump’s public overtures for negotiations received from Iranian leaders.

When he called off the planned strike at the last minute in late June, he assured advisers that if matters escalated with Iran, he would respond appropriately.

Trump has also downplayed the possibility that tensions could increase, noting they’ve already been increasing even after he backed off the strike.

The recent change in tone from the president has frustrated those who think he should avoid wading into further conflict with Iran, believing it could lead him to war potentially.

The British operated, Liberian-flagged ship, the MESDAR, has been allowed to continue its course after Iranian officials followed up with the ship on its environmental regulations, according semi-official Iranian news agency TASNIM, citing Iranian military officials in the Persian Gulf.

According to MarineTraffic.com, the MESDAR has picked up speed in the last few minutes and is now headed in a western direction into the Gulf, instead of north to Iran.  .

The ship has left Iranian waters, according to semi-official Iranian news agency MEHR.

UK Foreign Secretary Jeremy Hunt said a statement he is "extremely concerned" by the seizure of two naval vessels by Iran.

Hunt said there are were no British citizens on board the ships.

The United Kingdom has convened a COBRA meeting on the seized tanker, according to a UK government official. A COBRA meeting consists of British national security officials.

“I’m extremely concerned by the seizure of two naval vessels by Iranian authorities in the Strait of Hormuz.
“I will shortly attend a COBRA meeting to review what we know and what we can do to swiftly secure the release of the two vessels - a British-flagged vessel and a Liberian-flagged vessel.
“Their crews comprise a range of nationalities, but we understand there are no British citizens on board either ship.
“Our Ambassador in Tehran is in contact with the Iranian Ministry of Foreign Affairs to resolve the situation and we are working closely with international partners.
“These seizures are unacceptable. It is essential that freedom of navigation is maintained and that all ships can move safely and freely in the region.”

The British-flagged oil tanker ‘Stena Impero' was heading to Saudi Arabia's port of Al-Jubail from the UAE port of Fujairah when it was seized by the IRGC, the semi-official Fars news agency reported Friday, citing a statement from the IRGC.

The IRGC statement said the ship was making an entry from the exit point of the Strait of Hormuz in the South, "disregarding the established procedures that require all entries be made through the Northern pass," Fars reported.

The ship has been escorted to the Iranian coastal waters in Hormozgan province for further legal procedures and investigations, Fars said.

The US is taking measures to protect a ship near where two British tankers were seized by Iran.

According to a US defense official with direct knowledge, at this hour, the US military is monitoring the transit of US commercial cargo ship through the Strait of Hormuz using armed aircraft overhead. The US will not say the location or other details, but the transit typically takes six to eight hours.

The seizure of two ships was clearly a preplanned and coordinated Iranian operation, the US military believes. Both tankers were boarded by IRGC and taken into Iranian waters, about a half hour apart.

President Trump hailed a "close alliance" with the United Kingdom as he answered a question about seized British tankers in the Strait of Hormuz.

"We have a very close alliance with the United Kingdom. We always have," Trump told reporters at the White House.

He noted the "US has very few tankers going in because we’re using a lot of our own energy," but said the American presence in the region was still robust.

"We have a lot of ships there that are warships," he said.

Trump noted there would soon be a new British prime minister. "That's a good thing for the UK," Trump said.

Iran has also seized a second tanker, the Liberian-flagged MV Mesdar, according to a US official. Two more US officials tell CNN that, according to maritime intelligence reports, the indication is the Mesdar has been seized.

Iran's Islamic Revolutionary Guard Corps announced earlier that its navy has captured a British-flagged tanker ‘Stena Impero’ in the Strait of Hormuz.

The order of seizure of the two ships isn’t clear at this time.

The UK Chamber of Shipping said it "condemn unreservedly" the capture of a British tanker.

We condemn unreservedly the capture of Stena Impero as she transited the Strait of Hormuz earlier today. The action by those involved is in violation of international regulations which protect ships and their crews as they go about their legitimate business in international waters.
Our priority is for the safety and welfare of the crew. We call on the UK Government to do whatever is necessary to ensure their safe and swift return.
This incident represents an escalation. Whilst we call for measured response, it is also clear that further protection for merchant vessels must be forthcoming to ensure enhanced security to guarantee free flow of trade in the region.

Iran's Islamic Revolutionary Guard Corps said its navy has captured the British-flagged oil tanker in the Strait of Hormuz. Two US officials also said a British tanker has been seized.