Our live coverage of the plane crash in Iran has moved here.

Canadian Prime Minister Justin Trudeau said he spoke to President Trump about the plane crash and that he expressed his condolences.

Trudeau tweeted a readout of his call with Trump.

"President Trump expressed his condolences for the loss of life in the Ukraine International Airlines plane crash. The two leaders discussed the need for a thorough investigation to determine the cause of this crash," the readout said.

Eight Ottawa residents were killed in the Ukrainian plane crash in Iran, according to CNN news partner CTV News.

Friends and family confirmed to CTV News that 48-year-old Ali Pey, the founder and CEO of Message Hopper, a Kanata-based tech company, was killed in the Boeing 737 crash in Tehran that killed all 176 passengers and crew on board, including 63 Canadians.

Three University of Ottawa students were also among the victims of the crash, the university confirmed Wednesday.

Family and friends identified them to CTV News as Mehraban Badiei, Alma Oladi, and Saeed Kashani.

“The University of Ottawa is aware of reports that three of its students are listed on the passenger manifest of Ukraine International Airlines Flight PS752 that crashed in Tehran, Iran. The University of Ottawa is deeply saddened by this tragic crash and is working to confirm their identities. The entire campus is affected by this tragedy; we offer our sympathy and condolences to the families and friends of the victims," the university said in a statement.

A statement from Carleton University Wednesday afternoon said two members of its community were also killed in the crash. Biology student Fareed Arasteh and biology alumnus Mansour Pourjam were among the passengers on the plane, according to the University.

"Our thoughts are with Fareed’s and Mansour’s families, friends and colleagues at this difficult time, and with everyone who has suffered loss in this terrible tragedy," the university president Benoit-Antoine Bacon said in the statement.

Roja Azadian, who had travelled to Iran with her husband, was also killed in the crash, her friends told CTV News. Her husband couldn't board the return flight due to a ticket mix-up, so she went ahead alone, friends told CTV.

Another Ottawa resident, Fereshteh Maleki, who was visiting Tehran for her daughter’s wedding, was also killed in the crash, according to CTV News.

Given the level of the crew's experience, it's unlikely that the plane crash was the result of error, Ukrainian International Airlines vice president of operations Ihor Sosnovsky said in a statement on Wednesday.

Tehran airport is anything but a simple one. Therefore, for several years UIA has been using this airport to conduct training on Boeing 737 aircraft aimed at evaluating pilots' proficiency and ability to act in emergency cases. According to our records, the aircraft ascended as high as 2,400 meters. Given the crew's experience, error probability is minimal. We do not even consider such a chance.”

The airline also released the names of the pilots and crew, who died in the crash.

The flight attendants were:

A plane's so-called "black boxes" -- the flight data and cockpit voice recorders -- can provide crucial evidence about what happened before a crash.

After the black boxes from Ukraine International Airlines Boeing 737 plane were found, Ali Abedzadeh, the head of Iran's Civil Aviation Authority, told Iran's semiofficial Mehr news agency that the US would not be involved at any stage of the investigation.

"We will not give the black box to the manufacturer [Boeing] or America," he said.

Former FAA chief of staff Michael Goldfarb told CNN that move was not necessarily against protocol.

Under international rules, Iran would be the lead investigator of the crash and Ukraine should participate as the state of registry and state of operator of the aircraft.

But the US -- where Boeing is designed and manufactured -- is not required to be involved in investigations right off the bat, Goldfarb said.

If the black boxes are difficult to discern, if they’re damaged, the three best labs in the world are the British, the French and the NTSB in the US. It’s very common for those three entities to either be given the lead or called in," he said.

But Goldfarb added there was no way the Iranians could refuse to work with Boeing and do justice to the investigation.

"They have to work with Boeing. Boeing has all the data, owns all the drawings and designs, they have the engineers, they know the plane."

Secretary of State Mike Pompeo has called for "complete cooperation with any investigation into the cause of the crash," saying that the US would continue to follow the incident closely and was prepared to offer Ukraine "all possible assistance."

The escalated hostilities between the US and Iran have only further complicated the thorny task of investigating a Boeing jet crash near the Tehran airport.

One US transportation official called the situation “unimaginably” complex. The officials did not speculate on the potential cause of the crash but said that the US is interested in the “circumstances” of the incident.

US government investigators, for example, cannot simply fly into Tehran and meet with their Ukrainian counterparts. That prohibition is due to longstanding sanctions rather than the most recent events, according to two US transportation officials who spoke on the condition of anonymity.

The Iranian government has control of the investigation under international protocol. If the US were invited to join the probe, American investigators would need a special license granted by the Treasury Department’s Office of Foreign Assets Control in consultation with the State Department, according to the two officials.

That license would be somewhat uncharted territory for US aviation investigators, according to the officials.

Past international investigations that would have required a license for US involvement have generally involved older aircraft or involved crashes caused by circumstances like running out of fuel; because of that, the US investigators did not involve themselves. The last time a license was pursued, the process took approximately a year, one of the officials said.

The NTSB is monitoring developments surrounding the crash of Ukraine International flight 752 and is following its standard procedures for international aviation accident investigations, including long-standing restrictions under the country embargoes. As part of its usual procedures, the NTSB is working with the State Department and other agencies to determine the best course of action.”

US intelligence is “taking a look at the crash” of the Ukrainian jet last night, a US official tells CNN, as suspicions rise about what could have caused a Boeing jet to crash near the Tehran airport shortly after takeoff.

If there was a missile fired, there would be a heat signature that would be captured by US military and intelligence systems. So far, a review of the imagery has not found any telltale sign, according to another US official, but the scrutiny continues.

Intelligence analysts will also review images of the wreckage for indications of explosions from inside or outside the aircraft, as well as other intelligence.

The possibility of such an explosion is not farfetched, according to one expert.

“I think you’ve got to look very carefully at the nefarious,” he said.

“The plane was at 7,800 feet which would minimize but wouldn’t eliminate bird strike,” but apparent video of the incident shows what Goelz called “a pretty big fire.”

“There’s stuff coming off the plane,” he said.

Photos of nine Ukrainian crew members who died in the plane crash in Iran on Wednesday were on display in an impromptu memorial erected at Kiev's Borispol International Airport.

The crew were among 176 people on board the Boeing 737 jet, operated by Ukraine International Airlines, that came down shortly after takeoff from Tehran's international airport.

Bouquets of flowers and rows of candles were laid out to commemorate the victims of the crash. 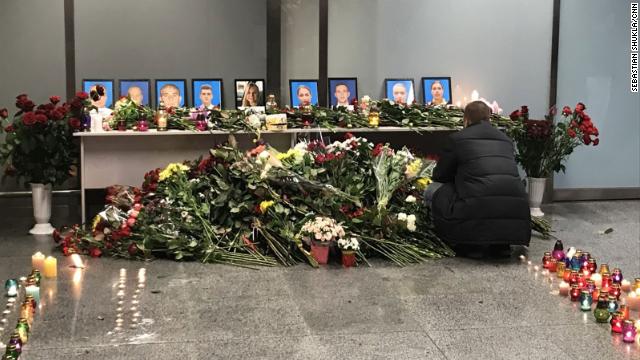 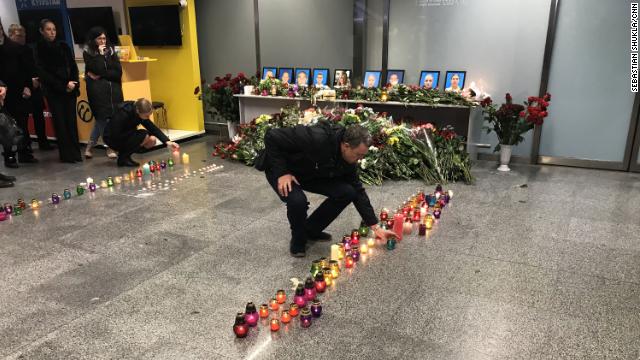 It's still too early in the investigation into the Ukrainian Airlines Boeing 737-800 plane crash to speculate about what went wrong, but flight data openly available online could provide some insight.

The Boeing 737-800 climbed to an altitude of nearly 8,000 feet before the aircraft's data suddenly disappeared, per FlightRadar 24. 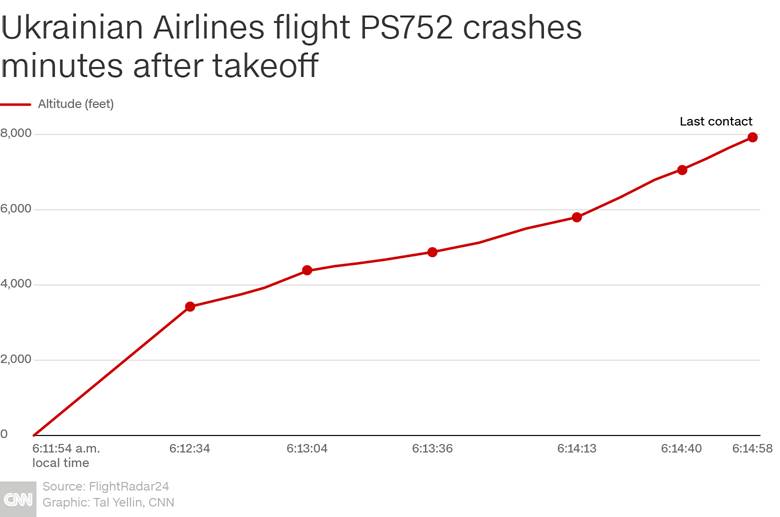 According to former FAA chief of staff Michael Goldfarb, that is "very unusual" and suggests a "catastrophic" incident, as opposed to engine failure.

An airliner should be able to keep flying even if one engine fails, which means pilots normally have time to communicate and recover the aircraft.

"When the data is lost at 8,000 feet suddenly that implies something catastrophic happened to that airplane and they could no longer communicate with the ground control," Goldfarb told CNN.

There is no indication at this stage of what may have caused a catastrophic incident on board the plane, and all options are still on the table.

Goldfarb said an "uncontained" engine failure -- which would create the type of large fire ball reported by witnesses -- could be to blame, but it was too early to tell. An uncontained engine failure, in which pieces of the engine break apart, releases shrapnel that can destroy the plane.

"Under terrorism, of course, any type of explosive device would obviously cause catastrophic loss of the hull," Goldfarb added.

Alan Diehl, a former accident investigator for the US National Transportation Safety Board, Federal Aviation Administration and Air Force, said that that engine failure would naturally be one of the main focuses of any investigation into the crash, considering the aircraft lost contact just minutes after takeoff.

"That's the second-most dangerous phase of flight, the most dangerous being the approach of landing, statistically speaking. That's when the engines are under maximum stress."

He said investigators always looks at four main causes in a crash -- mechanical, human, environment and lastly hostile actions. "All of those are certainly on the table."