“That was breaking as I came out here and safe to say we’re monitoring the situation,” McEnany said.

Lebanese authorities said there were a large number of injuries following an explosion near Beirut port earlier Tuesday.

In an earlier statement, the US State Department said it is also “closely following reports of an explosion in Beirut” and “working closely with local authorities to determine if any U.S. citizens were affected.”

Lebanese President Michel Aoun has directed all the armed forces to deal with the repercussions of the blast in Beirut and to conduct patrols in impacted areas and in the suburbs to ensure security, state-run National News Agency said.

What we know: Lebanese Prime Minister Hassan Diab declared Wednesday a day of national mourning in the aftermath of the massive explosion in the Beirut port area, the national broadcaster TeleLiban reported.

The US State Department is “closely following reports of an explosion in Beirut” and “working closely with local authorities to determine if any U.S. citizens were affected.”

“Reporting indicates the explosion occurred in/around the port of Beirut. We extend our deepest condolences to all those affected, and stand ready to offer all possible assistance,” a State Department spokesperson said in a statement Tuesday.

The Department urge US citizens to “avoid the affected area” and “shelter in place and follow the directions of local authorities.”

“We have no information about the cause of the explosion and would refer you to the Government of Lebanon for further information,” the department said.

Standing in the wreckage of CNN's Beirut bureau, senior correspondent Ben Wedeman surveyed the damage from a massive blast.

He said the explosion "blew out windows in this room, in the room next to us, our front glass doors," as well as the windows of neighbors in the building.

Wedeman said he had spoken to eyewitnesses living even closer to the port, where the explosion took place, who described a "scene of total destruction."

"The hospitals are overwhelmed at this point with the wounded, [and are] calling people to donate blood," he added.

Wedeman said he had been through wars in Lebanon, but had never felt anything "along the lines of this explosion," he said.

The cause of the blast remains unclear.

Lebanese Prime Minister Hassan Diab has declared Wednesday a day of national mourning in the aftermath of Tuesday’s massive explosion in the Beirut port area, the national broadcaster TeleLiban reported.

At least 10 firefighters working for Beirut's municipality are missing after the explosion that rocked Beirut Tuesday, the city’s governor Marwan Abboud said, adding that the scene reminded him of Hiroshima and Nagasaki.

Asked by a reporter if a fire caused the explosion, he said, “We don’t know. There was a fire, the [firefighters] came to put it out, then the explosion happened and they went missing. We are looking for them."

“It resembles to what happened in Japan, in Hiroshima and Nagasaki. That’s what [it] reminds me of. In my life, I haven’t seen destruction on this scale," he said.

"This is a national catastrophe,” he added. 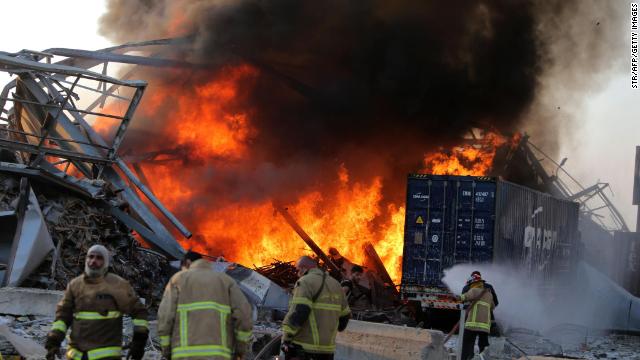