Our live coverage of Saudi journalist Jamal Khashoggi's case has ended. Scroll through the posts below to read about the case or visit CNN World.

Twenty-one Saudi citizens suspected to be involved in Jamal Khashoggi's death "will have their visas revoked or be ineligible for a visa to enter the United States,” State Department spokesperson Heather Nauert announced Tuesday afternoon.

Another State Department spokesperson told CNN that the Department had the authority "to revoke visas based on information that comes to light at any time indicating that a visa holder may be inadmissible to the United States or otherwise ineligible for a visa," adding that US law prohibited discussing individual visa cases. 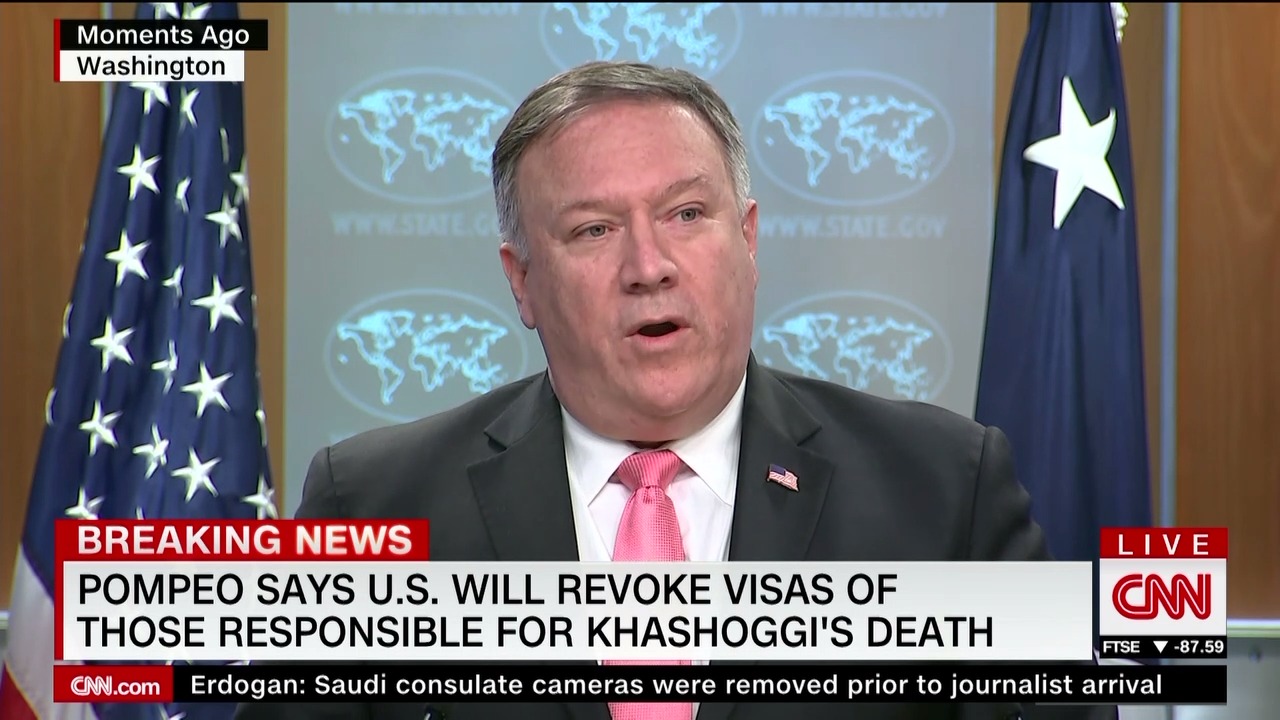 Speaking at the State Department Tuesday afternoon about the death of Jamal Khashoggi, Secretary of State Mike Pompeo said the US has identified “at least some of the individuals responsible including those in the intelligence services, the royal court, the foreign ministry and other Saudi ministries.”

On top of revoking visas, Pompeo said the US is also “taking appropriate actions," including potential sanctions. "These penalties will not be the last word on this matter from the United States," he said.

President Trump has been reluctant to criticize Saudi Arabia, insisting several times in the past week that people should give Saudi Arabia the benefit of the doubt. Pompeo, too, stressed the US' "strong partnership" and "shared strategic interests" with Saudi Arabia.

"We are making very clear that the United States does not tolerate this kind of ruthless action to silence Mr. Khashoggi ... Neither the President nor I am happy with this situation," he said. 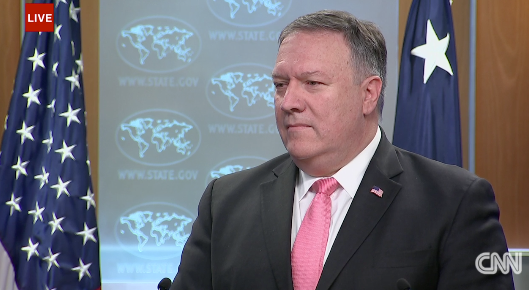 US Secretary of State Mike Pompeo said the US will revoke visas and issue “visa lookouts” for those identified as responsible for the murder of Jamal Khashoggi.

Pompeo also said the Treasury Department is reviewing any applicability of sanctions for those responsible. 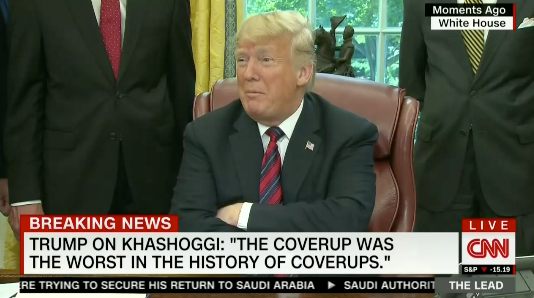 "I want to see the facts first. Saudi Arabia has been a great ally," he said Tuesday in the Oval Office.

Trump also defended his decision to stand by Saudi Arabia because of the economic interests they have in the US. "They are doing hundreds of billions of dollars in investments ... and thousands and thousands of jobs. "

He warned that the US would only be hurting itself if he decided to pull out of arms deals with the kingdom, and added that "I will tell you that Russia and China would love to have that military order.. Russia would pick that up very quickly."

Trump added "that is no excuse" for Khashoggi's death.

"But if what happened happened, and if the facts check out, then it's something that's very bad," he said.

"Somebody really messed up and they had the worst cover-up ever," Trump added.

Turkish and Saudi officials have found two suitcases and various other materials Tuesday in the abandoned Saudi consulate car at the Istanbul Sultangazi district parking lot, according to Turkey’s state news agency Anadolu.

CNN witnessed the Turkish police and forensic team’s arrival at the parking lot. A senior Turkish police officer at the scene told CNN that a senior Saudi diplomat and a representative from the Turkish foreign ministry were also present at this examination.

Why this matters: Istanbul’s Sultangazi District Chief Police Officer Mehmet Karaca confirmed to CNN Monday that the car they are examining is part of the Jamal Khashoggi case.

Forensic teams catalogued the contents from the vehicle, which was found Monday. They will take the relevant material found inside the car for further analysis, according to photos and reports in Turkish media.

CNN witnessed the abandoned Saudi consulate car being driven out from the parking lot.

A Turkish government official told CNN that Turkish law enforcement handed the diplomatic vehicle to the Saudis, and it was the Saudis who drove the car outside of the parking lot. 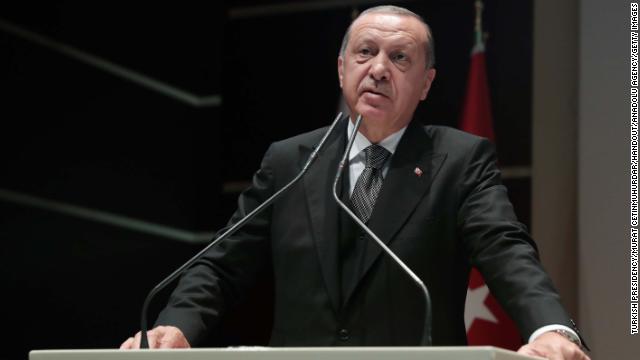 Turkish President Recep Tayyip Erdogan called the US-based children of Jamal Khashoggi on Tuesday to offer his condolences and update them on the investigation into the murder, a source confirmed to CNN.

Another report stated the call was with Khashoggi’s son Abdullah and other family members. The report added, “President Erdogan said he was deeply sad about Khashoggi’s murder. He will do everything to uncover the murder.”

US Vice President Mike Pence said CIA Director Gina Haspel is on the ground in Turkey now “reviewing the evidence” in the murder of Jamal Khashoggi.

“We are going to follow the facts,” Pence added. On her return, Haspel will brief President Trump.

Pence said the US “will get to the bottom” of this matter and it “will not go without an American response.”

Reporters from the Wall Street Journal, Bloomberg, Financial Times and Reuters are here at the "Davos in the Desert." But it's still a small turnout compared to last year's conference when there was a throng of international media broadcasting live.

This time round, in the wake of the Khashoggi scandal which has cast a long shadow over the conference, only Sky News Arabia and Al Arabiya have broadcasting stands.

It seems like the organizers are scrambling to find moderators for their panels, as international media partners pulled out. Some guests are moderating up to three panels.

On the conference app, the agenda keeps changing and speakers are added last minute.

The halls are a bit quieter than last year, but people we speak to say there is still a “good turnout."