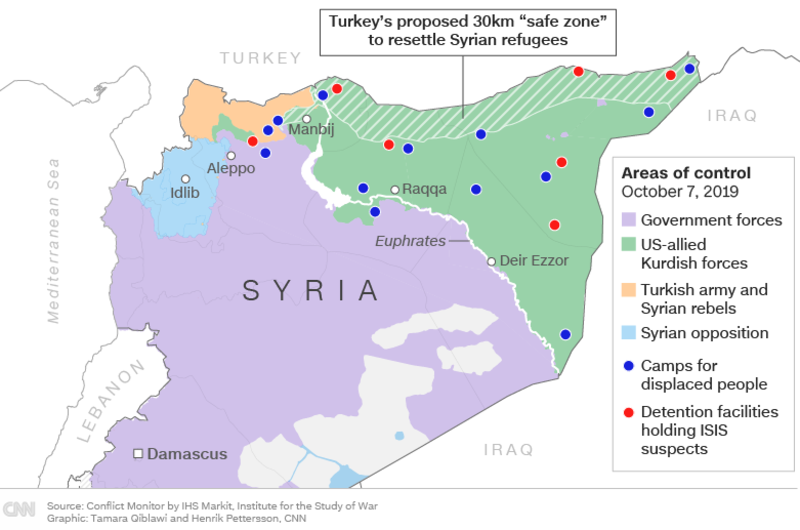 Here's the latest on the Turkish military offensive in northeast Syria:

A senior State Department official said that President Trump had tasked the department with “trying to see if there are areas of commonality between the two sides, if there’s a way that we could find our way to a ceasefire.”

“Right now, that’s the work that we’re doing, but I can’t describe in any more detail,” the official told reporters on a conference call today.

The official said that since Trump's call with Turkish President Recep Tayyip Erdogan on Sunday, there had been “various diplomatic exchanges that President Erdogan has in various ways been involved on.” Two officials confirmed on Wednesday that US Ambassador to Turkey David Satterfield attended a meeting at the Turkish Ministry of Foreign Affairs that morning.

The senior State Department official Trump is “trying to find common ground to come up with a ceasefire, come up with a way to bridge the gap between the [Kurdish People's Protection Units] wing of the [Turkish Kurdistan Workers Party] and Turkey.” He said the President would “most prefer” to do “a negotiated settlement.”

The official said there had been no conversations between the US and the Syrian government on the Turkish military operation.

Some background: The US already tried to mediate a deal called "The Security Mechanism" between the Turks and the Kurds. The US convinced the Kurds to remove their troops from the border and dismantle their defensive fortifications as part of the deal aimed at appeasing Turkey. The US also gave Turkey access to airspace and intelligence on the area, intelligence that was likely used by Turkey to formulate its target lists. The US said it was working days before Turkey launched the offensive.

A senior State Department official expressed serious concerns about the Turkish military operation into northeast Syria, but did not go as far as to criticize President Trump pulling back troops from the region.

“It endangers our allies in the fight against terror, the [Syrian Democratic Forces],” the official said. “It undercuts our efforts to defeat ISIS by drawing these SDF forces away from the battle in the south and frankly forcing our troops to focus on the military aspects of the invasion.”

“It creates tremendous insecurity for the entire region,” the official added.

Asked about comments from allies like Israel and Saudi Arabia expressing distress that the operation advantages Iran, the official said they were “extremely distressed.”

“I’m extremely distressed about this too. I’m right up there with the Saudis and Bibi Netanyahu. This was a very big mistake and this has very big implications for all of our security. I don’t know of anybody who isn’t upset with it,” they said.

He did not commit to taking such action, but said it was possible the US does something strong with regard to sanctions.

Trump said the US has a good relationship with the Kurds, and expressed hope the US could mediate the situation.

President Trump claims that the US “did our job perfectly” in Syria.

The President's tweet comes as Republican frustration grows with his decision earlier this week to allow Turkey to attack Kurdish forces who fought alongside Americans to defeat ISIS.

In a series of tweets, he lays out three US options: "Send in thousands of troops and win Militarily, hit Turkey very hard Financially and with Sanctions, or mediate a deal between Turkey and the Kurds!"

For now, there is no plan to withdraw US forces beyond the approximate 30 KM zone, according to a defense official.

The forces that were repositioned were in areas roughly between Talabyad and Rasa al Ayn, the source said.  US forces for now remain near Manbij and at the Kobani airfield and other locations.

US troops have pulled back from the border but are still co-located with Syrian Democratic Forces (SDF) elsewhere in Syria and remain in other places such as Manbij. While they are still "working" with the SDF as reported, counter-ISIS operations have been suspended.

Turkey has been cut off from US/coalition intelligence, surveillance and reconnaissance feeds, however they had access to those until a few days before the attack and likely made use of that intelligence for target selection.

Norway is also reviewing all current licenses for military and multi-use military export licenses in Turkey, according to the statement.

“We are following the situation with deep concern and reiterate our call for Turkey to end its military operation and respect international law. The Ministry of Foreign Affairs has also expressed this in a meeting with Turkey's ambassador to Norway today," Søreide said.

She added, “We are particularly concerned about the humanitarian situation of the civilian population.”

As a fellow NATO country, Norway has until now allowed the export of weapons, ammunition and other military equipment to Turkey, which has been a NATO member since 1952.

US Ambassador to the United Nations Kelly Craft told reporters that Trump did not endorse Turkey's military action in Syria.

"We just finished our consultations on Syria, and as the President has made abundantly clear, the US has not in any way endorsed the decision of the government of Turkey to mount a military incursion into northeast Syria," Craft told reporters.

Referring to the Kurdish population and religious minorities, she added:

Failure to play by the rules to protect vulnerable populations, failure to guarantee that ISIS cannot exploit these actions to reconstitute will have consequences.”

The governments of Germany, Belgium, France, Poland, the United Kingdom and Estonia (collectively known as the EU6) call upon Turkey to cease unilateral military action in north-east Syria.

The EU6 do not believe military action “will address Turkey’s underlying security concerns,” according to a statement read to journalists by Ambassador Jürgen Schulz of Germany following Security Council closed-door consultations.

“Renewed armed hostilities in the north-east will further undermine the stability of the whole region, exacerbate civilian suffering and provoke further displacements which will further increase the number of refugees and IDPs in Syria and in the region," the statement said.

The EU6 also called for "the protection of civilians and unhindered, safe and sustainable humanitarian access throughout Syria."