President Donald Trump delivered a blistering and rambling monologue to the journalists he allowed into his Cabinet meeting for more than 70 minutes on Monday. His press secretary, Stephanie Grisham, later tweeted, "I hope we see honest reporting from today's mtg."

We can honestly tell you that Trump's remarks were highly dishonest. Here's some of his false claims on Syria:

The deal with Turkey

"People have been trying to make this deal for years," Trump said of his ceasefire agreement with Turkey.

Facts First: The President's claim is baseless to the point of being nonsensical. The deal is a narrow agreement specifically tied to the Turkish offensive that followed Trump's decision to withdraw US troops from a Kurdish-held region of northern Syria, not an agreement that resolves long-standing regional disputes. Further, Presidents Barack Obama and George W. Bush never sought to give Turkey anything like the concessionary terms of Trump's deal.

You can read a longer fact check here.

The length of the Syria mission

Trump said American troops were initially supposed to be in Syria for a mere "30 days."

Facts First: There was never any specific timeline for the US military's involvement in Syria, much less a timeline of only 30 days.

"There was never a 30-day timetable on the US presence in Syria," said Syria expert Steven Heydemann, a professor of government and director of the Middle East Studies program at Smith College. "The previous administration, and officials serving in this administration, have never offered a fixed timetable for the US mission. Official statements have emphasized that the presence of US forces would be short, limited in scope, and small. But beyond general comments along those lines, there has been no statement indicating it would end after 30 days."

The troops being withdrawn from Syria

Facts First: He is not bringing the troops back home, at least not at the moment.

Trump has announced that "United States troops coming out of Syria will now redeploy and remain in the region to monitor the situation and prevent a repeat of 2014, when the neglected threat of ISIS raged across Syria and Iraq." He has also announced that 1,800 more troops would be deployed to Saudi Arabia.

Trump conceded at the Cabinet meeting that the soldiers will be "sent, initially, to different parts," but he claimed that they would "ultimately" return to the US.

Germany's defense minister has called for an internationally controlled area in northern Syria in a bid to protect displaced civilians and fight against ISIS-led terrorism.

"My recommendation is that we establish an internationally controlled security zone in cooperation with Turkey and Russia," Annegret Kramp-Karrenbauer, who is also head of the Christian Democratic (CDU) party, said in an interview in German broadcaster Deutsche Welle (DW) on Monday.

"This security zone would seek to resume the fight against terror and against the Islamic State, which has currently come to a standstill. It would also ensure that we stabilize the region so that rebuilding civilian life is once again possible, and so that those who have fled can also return voluntarily," she said.

The United Nations estimates more than 160,000 people have been displaced in Northern Syria since Turkey's military campaign began.

For years, the area has been a place of refuge for people fleeing battle-stricken parts of the country. Before the Turkish operation began, the area was home to some 650,000 people who had already been displaced at least once, according to Save the Children. Many are finding themselves displaced again as the area becomes the latest frontline in the country's eight-year war.

Kramp-Karrenbauer said her idea -- which is the first time the German government has proposed a military mission in the Middle East -- had been coordinated with German Chancellor Angela Merkel and proposed to Western allies.

She stressed that European support was needed. "But we can't only talk about this. Europe cannot simply be an onlooker. We also have to come up with our own recommendations and initiate discussions," she told DW.

President Donald Trump spoke at length during a Cabinet meeting on Monday about his decision to withdraw US troops from northern Syria -- arguing that the US never agreed to protect Syrian Kurds forever, suggesting the US may secure an oil deal for the Kurds to bolster their finances and saying he's "the one that did the capturing" of ISIS fighters in Syria.

Earlier this month, the President decided to have the US exit northern Syria ahead of a Turkish incursion into the area. US troops were forced to leave former US allies -- the Kurds -- in the region, and last week the US negotiated a "ceasefire" with Turkey to have Kurds exit the area, a deal that forced America's one-time Kurdish allies to cede large swaths of territory to Turkey.

The President repeatedly said during the Cabinet meeting that a main reason behind his decision to have the US exit northern Syria was that it was something he campaigned on. He argued that though his stance was not popular in Washington, crowds at his rallies cheered loudly when he said he'd bring American troops home.

Trump acknowledged that a "small" group of US troops would remain in Syria.

Read the rest of the story here.

It's no secret that Turkish President Recep Tayyip Erdogan sees his country as the pre-eminent Muslim power in the Middle East. He regards his vision of political Islam as competing with that of Saudi Arabia and the United Arab Emirates. He frequently accuses the United States of trying to belittle his country, and ruminates about a "greater Turkey."

But does Erdogan believe that Turkey has the right or need to acquire nuclear weapons to cement its status?

Last month the Turkish leader suggested as much, saying that "some countries have missiles with nuclear warheads, not one or two. But we can't have them. This, I cannot accept." He went on to single out Israel, saying: "We have Israel nearby, almost as neighbors. They scare others by possessing these. No one can touch them."

It was the first time Erdogan, who was speaking at a provincial rally of his governing AKP party, had raised the subject. It may have been the Turkish leader riling up his nationalist base. It may also have been a warning that, should Iran and Saudi Arabia move toward becoming nuclear-armed states, Turkey would not stand idly by.

Last year, Saudi Arabia's Crown Prince Mohammed bin Salman told CBS News that the Kingdom "does not want to acquire any nuclear bomb, but without a doubt if Iran developed a nuclear bomb, we will follow suit as soon as possible."

And, in part, the Turkish leader's remarks may have simply been his trademark blunt -- and sometimes incendiary -- rhetoric. Erdogan has compared both modern Germany and Israel with the Nazis, and has threatened to unleash hundreds of thousands of Syrian refugees on Europe. 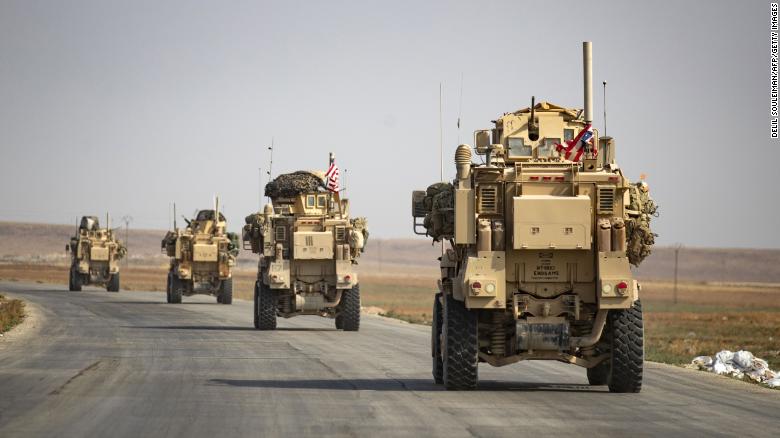 Hundreds of trucks carrying American troops have crossed into Iraq in a long military convoy yesterday, marking the largest withdrawal of US forces from Syria to date.

US personnel, who were fighting the terror group alongside the Kurdish-led Syrian Democratic Forces, will be mostly repositioned in western Iraq, US Defense Secretary Mark Esper said, while some will remain temporarily in Syria to protect oil fields from ISIS. It's an apparent walk back of President Donald Trump's assertion last week that he would bring all American troops stationed in Syria "back home."

On Monday, Esper said there had been discussions about keeping US troops in northern Syria for longer but no military plan had yet been presented to the President.

Separately, The New York Times reported that Trump was learning towards keeping a small contingent of about 200 troops in eastern Syria. CNN has reached out to the White House for comment.

Russian President Vladimir Putin and his Turkish counterpart Recip Tayyip Erdogan will meet in Sochi today to discuss the future of Syria.

The meeting comes a day after hundreds of trucks carrying American troops crossed into Iraq, marking the largest withdrawal of US forces from Syria to date.

It's clear that the future of the region will, to a large extent, now be determined by the Russian President. With Trump's abandonment of the Kurds, America's main allies in the fight against ISIS, and his de facto green lighting of Turkey's invasion of northern Syria, the White House maneuvered itself out of the Syria equation. For better or worse, Putin now owns the military and political mess unfolding there.

The US and Turkey announced a five-day break in fighting in Northern Syria last week. It was referred to as a "ceasefire" by the US and as a "pause" by Turkey — and that hiatus ends today.

The significance of 120 hours: The break spanned a 120-hour period between its announcement and a key meeting between the real powerbrokers: Russian President Vladimir Putin (who backs the Syrian government, which recently allied with the Syrian Kurds), and Turkish President Recep Tayyip Erdogan.