Mike Bloomberg, touting the millions he spent to help elect Democrats to the House in 2018, came close to saying that he “bought” the race, but caught himself and said, “I got them.”

“They talk about 40 Democrats” that were elected to deliver a Democratic majority in 2018, Bloomberg said. “Twenty-one of those were people they spent $100 million to help elect.”

He added: “All of the new Democrats that came in, put Nancy Pelosi in charge, and gave the Congress the ability to control this President, I boug… I got them.”

Pete Buttigieg on Tuesday night echoed the fears some Democrats have about nominating Bernie Sanders, using a back-and-forth with the Vermont senator to warn that a candidate at the top of the ticket who self-identifies as a “democratic socialist” could hurt down ballot races for the House and Senate.

Buttigieg said nominating Sanders would lead to “four more years of Donald Trump, Kevin McCarthy as Speaker of the House, and the inability to get the Senate in Democratic hands.”

“The time has come to stop acting like the presidency is the only office that matters. Not only is this a way to get Donald Trump re-elected. We have a House to worry about. We have a Senate to worry about. And this is really important,” Buttigieg continued.

More moderate Democrats – including those who won their seats in 2018 – have publicly expressed concerns about what Sanders atop the ticket would mean for down ballot races.

Buttigieg, as he has focused most of his attacks on Sanders, has stoked these fears, highlighting what he believes is the need to defend these House seats and broaden the Democratic base.

“If you want to keep the house in Democratic hands, you might want to check with the people who actually turned the house blue,” Buttigieg said. “Forty Democrats who are not running on your platform. They are running away from your platform as fast as they possibly can. I want to send those Democrats back to the United States House.”

After the Nevada caucuses, Pete Buttigieg went after Bernie Sanders:

Joe Biden and Tom Steyer attacked each other’s records on race in a tense exchange as the two men vie for the support of African American voters in South Carolina ahead of Saturday’s primary.

Biden lambasted the billionaire businessman for investing in private prisons.

“They hogtied young men in prison here in this state. They in fact made sure that in Georgia they did not have health care for the people that were being held,” he said.

“You wrote the crime bill,” Steyer shot back, referencing the 1994 legislation signed into law by former President Bill Clinton and noting that it had imposed stiff mandatory minimum sentences that had left hundreds of thousands of black and brown people in jail. 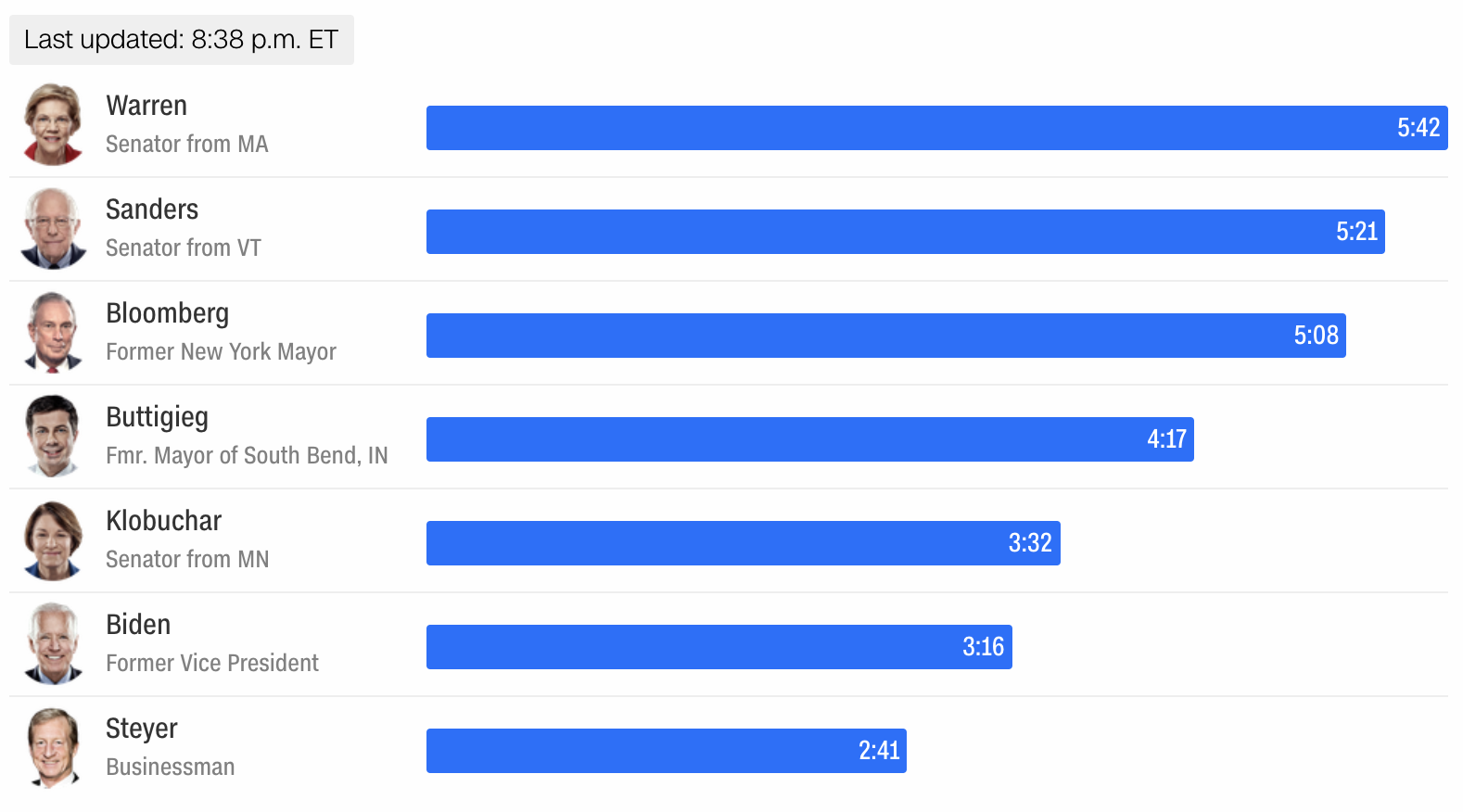 She continued by pointing out that she does not think Bernie Sanders is the right person to nominate.

"I like Bernie. We came in together to the Senate. But I do not think that this is the best person to lead the ticket."

Elizabeth Warren called out Michael Bloomberg over reports he told a female employee, who told him she was pregnant, to "kill it."

Bloomberg denied having made the comment, shooting back: "I never said that."

Warren also hit Bloomberg for backing the Republican senator, Scott Brown, she challenged and defeated in 2012.

"He dumped $12 million into the Pennsylvania Senate race to help re-elect an anti-choice, right-wing Republican senator. And I just want to say, the woman challenger was terrific," Warren said of the Toomey-McGinty race.

Then Warren turned to her own race.

"In 2012, (Bloomberg) scooped in to try to defend another Republican senator against a woman challenger," Warren said. "That was me. It didn't work, but he tried hard."

He added: "Because it was about profiling people based on their race."

Buttigieg went on to point out that he's "conscious of the fact that there are seven white people on this stage talking about racial justice."

" None of us — none of us have the experience, the lived experience of -- for example, walking down the street, or in a mall, and feeling feeling eyes on us, regarding us as dangerous, without knowing the first thing about us justice because of the color of our skin."

Pete Buttigieg used an exchange with Bernie Sanders over the number of billionaires who have donated to his campaign to hit back at the Vermont senator — and then raise some money.

Sanders, hitting back at a number of attacks he was facing on Tuesday, said, “Americans don't want candidates to be running to billionaires for huge amounts of funding.” He specifically called out Buttigieg.

The former mayor said it was “untrue” and noted that his campaign has donations from more than 2,000 people “in Charleston alone.”

“Grassroots contributions are the life blood of my campaign,” Buttigieg said, then turned the answer into a pitch for his own campaign. “I shouldn't miss the opportunity, if you're watching right now and you support my campaign go to peteforamerica.com, and chip in,” he said. “And if you are watching right now, and you're a billionaire, I will raise your taxes. But if you'd like to defeat Donald Trump, please go to peteforamerica.com and donate legal maximum of $2,800.”

Sanders was seen laughing at the pitch.

Joe Biden criticized Bernie Sanders for his votes against the Brady Bill in 1993 and reports that the Vermont senator considered a primary campaign against then-President Barack Obama in 2012 — which Sanders denies.

Biden said he’d sought a longer waiting period before handgun purchases in the Brady Bill than what Sanders had supported. He noted that the debate was taking place within walking distance of the Mother Emanuel AME Church in Charleston, the site of a 2015 massacre at which a white supremacist gunman left nine dead.

“I’m not saying he’s responsible for the nine deaths, but that man would not have been able to get that weapon had the waiting period been what I suggested,” Biden said.

He also pointed to reports about Sanders having considered a primary challenge against Obama — a potentially significant negative for Sanders in South Carolina, a state where more than half the Democratic primary electorate is African American.

“Let’s talk about progressive: Progressive is getting things done, and that’s what we got done — we got a lot done,” Biden said.