For some time, it was believed that Abu Bakr al-Baghdadi was hiding somewhere along the Iraqi-Syrian border.

The news that he was killed in Idlib province, in the northwest of the country, had many analysts scratching their heads. Idlib is under the control of Hayat Tahrir a Sham, a rebel group with ties to Al Qaeda. While the militant jihadist groups have plenty in common ideologically, for years years, ISIS and al Qaeda (and its affiliates) have been locked in bitter fighting in Syria. It would seem an unlikely hiding place for Baghdadi, particularly in a village just 3 miles from the Turkish border.

Moreover, in order to move from the Euphrates Valley to Idlib, Baghdadi would potentially have had to pass through areas under the control of Kurdish and Turkish or regime forces.

The death of Baghdadi would be an important symbolic victory against ISIS. At this stage, the group should really change its name. It no longer resembles a state, but rather a grouping of local insurgent cells. That is not to minimize the danger it can still present, capitalising on security vacuums that exist in Iraq and Syria and on its numerous affiliates in Africa and Asia.

For President Trump this is a huge boon, particularly as it comes on the heels of US troops pulling out of Syria. Trump has faced huge criticism domestically and internationally for the withdrawal, in part because it was seen as raising the possibility of an ISIS resurgence. Baghdadi’s death would give him an opportunity to deflect such criticism and take credit for the decimation of ISIS, though that process actually began well before his time. 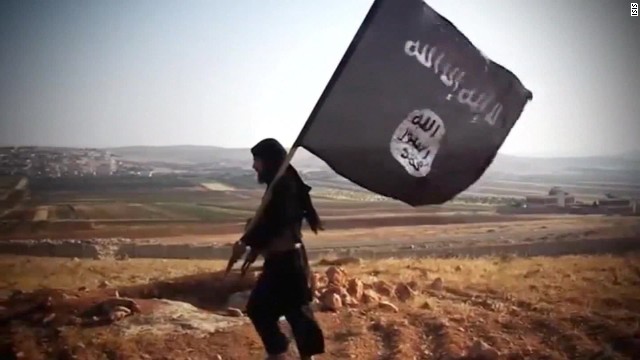 The head of ISIS, Abu Bakr al-Baghdadi may be dead. ISIS, however, is far from finished. It operates in West Africa, Libya, Egypt’s Sinai Peninsula, Afghanistan and the Philippines, and has followers in Europe and elsewhere. That in addition to, according to a report issued by the Pentagon’s Inspector General in August, between 14,000 and 18,000 fighters between Syria and Iraq.

Baghdadi was a secretive leader, making only one public appearance, in July 2014, when he delivered a sermon in Mosul’s Grand Mosque. During the years when ISIS’ fortune turned, when the group lost control of the cities of Tikrit, Falluja, Ramadi and Mosul in Iraq, and eventually its de facto capital in Syria in autumn 2017, he remained silent. It was only after the fall of ISIS’ last stronghold in eastern Syria did he finally release an audio statement.

Among the dozens of ISIS fighters and their wives and children we interviewed this spring during the battle of Baghouz, the group’s last stronghold, few mentioned the name of Abu Bakr al-Baghdadi. The diehards, the ones who still remained loyal to the ideology of ISIS, stressed their allegiance to ad-Dawla al-Islamiya -- the Islamic State, not to its leader.

Baghdadi never had a cult of personality. He did stress that he was a descendant of the Prophet Mohammed to burnish his Islamic credentials, but he never rose to the level of al Qaeda’s Osama bin Laden, who was recognizable the world over. Bin Laden first came to fame during the 1980s, when he led the so-called Arab Mujahedeen in the war against the Soviet occupation of Afghanistan. In the 1990s he gave interviews to the western media, including CNN, and even after the 9/11 attacks on the United States he issued statements and put out videos.

As khalifa, or caliph, of the Islamic State, he never granted an interview to anyone.

ISIS, the organization, excelled at spreading its message through social media, but even there Baghdadi’s profile was low. For example, in issue 15 of Dabiq (July 2016), one of ISIS’ online publications, he is only mentioned once.

Baghdadi’s possible elimination is a blow to ISIS, yet not a fatal one.

The northern reaches of Syria's Idlib province is not a natural location for Abu Bakr al-Baghdadi to hide. The area is heavily dominated by al Qaeda, the terror group from which ISIS split, and against which it fought during the early days of its formation.

But personal relations often count for more in the alphabet soup of jihadi politics, and a few local friends could well have provided him a hideout.

A big question now will be whether he was trying to get himself or his family out of Syria. Baghdadi is believed to have been targeted a few miles inside the border with Turkey, on a notorious people-smuggling route.

Earlier this year, CNN's Arwa Damon traveled to what was left of the mosque in the northern Iraqi city of Mosul where Abu Bakr al-Baghdadi first announced the creation of ISIS' "caliphate" and declared himself its leader in 2014. While Damon was there, she spoke with an elderly imam who was in the audience for Baghdadi's now infamous address. Here's what he had to say about that moment:

Standing at the edge of the rubble cascading out of the ruins of the historic Great Mosque of al-Nuri in Mosul's Old City, Mahmoud Dawoud, an elderly imam, still recalls the Friday in July 2014 when a mysterious guest arrived to deliver a sermon.
Dawoud remembers losing cell phone reception two hours before prayer time, and wondering whether a tower had gone down. Shortly after that, masked men swarmed the streets and rooftops, a convoy of some 200 cars with tinted windows thundered up to the mosque's entrance, and a man dressed in black robes and a black turban appeared.
"I wondered who was coming, we didn't know who was coming," he recalled. "Then they said Baghdadi is coming. We were like, who is Baghdadi?"
The imam said he hung at the back of the crowd as Abu Bakr al-Baghdadi announced the establishment of ISIS' caliphate, declared himself its leader, and ordered all Muslims to obey him.
"'I am a Muslim and I know my religion. I know that he isn't here to protect Islam,'" Dawoud remembered thinking to himself at the time. "We were amazed when he declared the caliphate -- the Ottoman caliphate ended 100 years ago, and now it's back?
"People were all pledging allegiance and shouting 'God is great.' They were grabbing his shoulder, kissing him, as if that's going to get them to heaven."
Dawoud said he knew in that moment that Mosul would be destroyed. 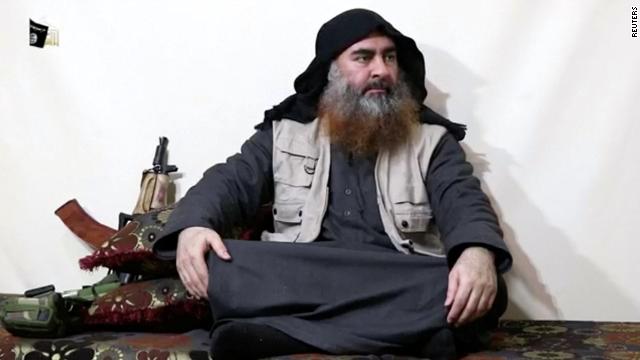 Despite being hunted by the world's best intelligence agencies and US authorities offering a $25 million reward for information leading to his capture, ISIS' leader Abu Bakr al-Baghdadi has proved to be incredibly elusive.

Over the last five years, there's been little more than brief sightings, spotty intelligence and conflicting information about the leader's whereabouts. He has been incorrectly reported dead or injured multiple times.

To date, the historic Great Mosque of al-Nuri in Mosul's Old City, where Baghdadi announced the creation of ISIS' so-called caliphate in 2014, is one of his only locations that have been fully confirmed.

It is believed that Baghdadi has gone to great lengths to bolster his security, moving around often and only meeting with his closest circle of associates. A mid-level Syrian ISIS prisoner on death row in Iraq told CNN earlier this year that there were attempts by foreign fighters to overthrow the leader more than a year ago, but Baghdadi had them killed. The dissent within ISIS leadership ranks further shrunk his entourage.

An Iraqi intelligence source told CNN that the sprawling Iraqi town of Al Shirqat was one of the areas Baghdadi moved through in 2015, holding meetings with senior commanders in safe houses. Abu Omar al-Shishani, who the Pentagon described as Islamic State’s “minister of war,” was killed in a targeted airstrike in the town in 2016, Iraqi intelligence and residents confirm. The target, they say, was a home where Shishani and Baghdadi used to meet.

A senior Iraqi intelligence officer told CNN that, on at least three occasions -- two in Iraq and one in Syria -- they called in strikes that came close to taking out Baghdadi. 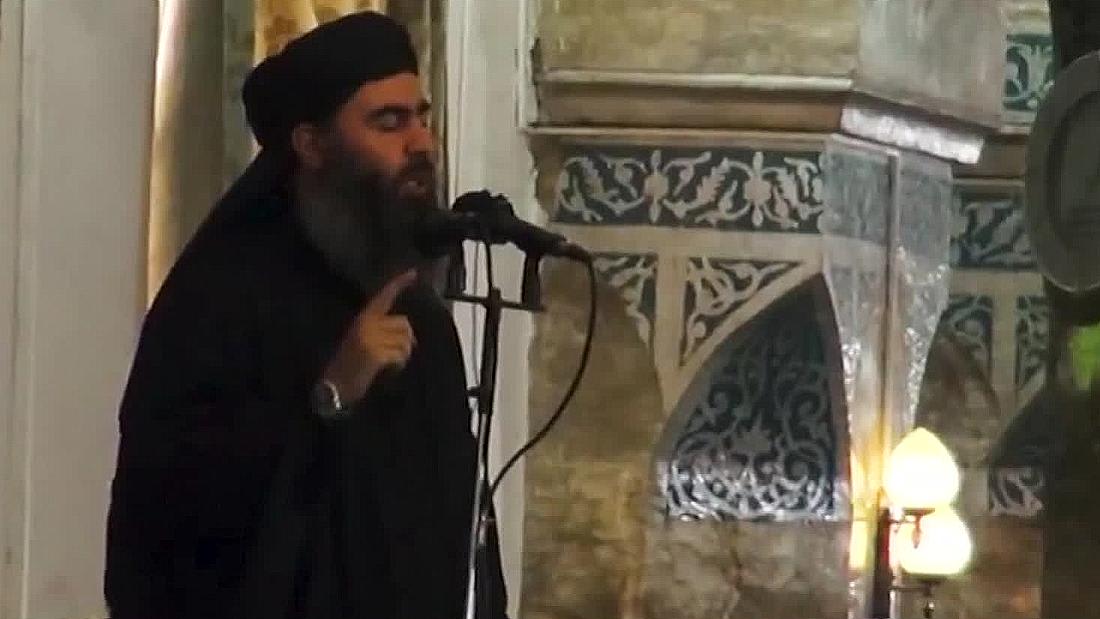 ISIS leader Abu Bakr al-Baghdadi once reigned over a realm the size of Britain.

Now, five years after he announced the caliphate's creation from the pulpit of the al-Nuri mosque in the Iraqi city of Mosul, that realm has all but disappeared. In March, Kurdish forces captured the group's last pocked of control in eastern Syria.

At the group's height, 7.7 million people were estimated to live under ISIS rule, according to Operation Inherent Resolve (CJTF-OIR), the official name for the coalition fighting ISIS. Many of those people paid taxes, fees and fines to ISIS, which made up a large portion of the group's income. 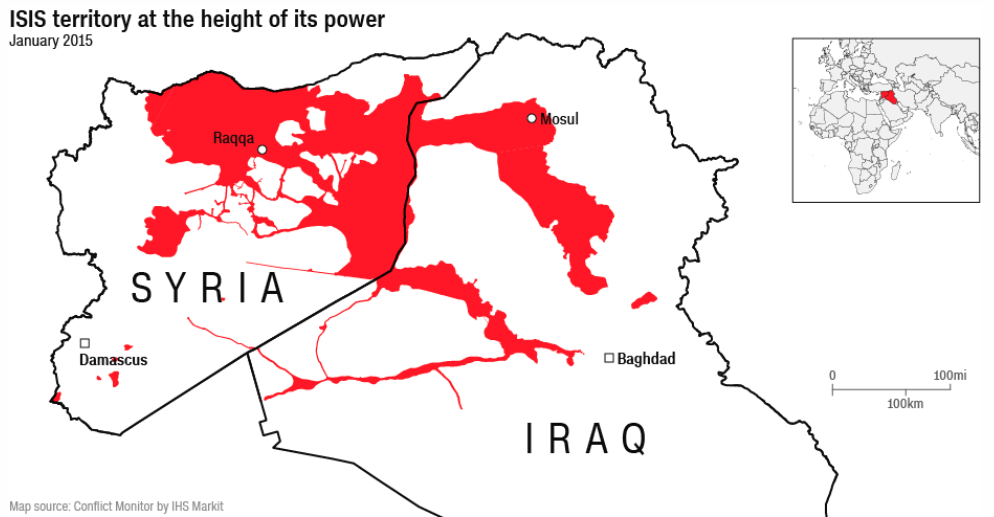 In the years since, the group's annual revenue more than halved: from up to $1.9 billion in 2014 to a maximum of $870 million in 2016, according to a recent report by the International Centre for the Study of Radicalisation and Political Violence (ICSR) at King's College London.

Despite the loss of territory, and funds, the Pentagon’s Inspector General estimated in August that ISIS still had between 14,000 and 18,000 fighters across Iraq and Syria.

Altogether, at least 41,490 international citizens traveled to Syria and Iraq to join ISIS, according to ICSR. And foreign fighters continued to arrive, undeterred -- the coalition recently estimated that about 50 were arriving each month.

Lina Khatib, the head of the Middle East and North Africa programme at Chatham House, a UK-based think tank for international affairs, told CNN in March that ISIS will revert to its insurgent roots as it moves underground, using the territorial loss as a call to arms among its network of supporters.

"The group itself has not been eradicated," Khatib told CNN. "The ideology of ISIS is still very much at large."

Turkey's Defense Ministry has said it exchanged information with the US prior to the operation in Syria's northwestern Idlib province.

"Prior to the US Operation in Idlib Province of Syria last night, information exchange and coordination between the military authorities of both countries took place," the Turkish Defense Ministry tweeted Sunday.

The tweet did not elaborate with any further details or directly reference Abu Bakr al-Baghdadi.

The Iraqi Joint Operations has said it assisted the US with intelligence used to carry out the raid targeting ISIS leader Abu Bakr al-Baghdadi.

Iraq's state-run Al Iraqiya TV channel has also been showing footage of what it described as the first pictures of the headquarters where Baghdadi was hiding out, in the aftermath of the raid.