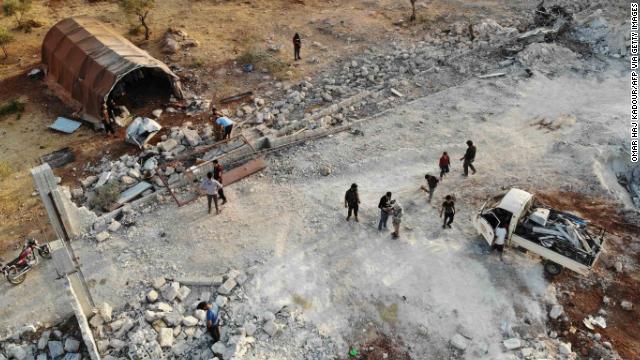 The US military operation that targeted ISIS leader Abu Bakr al-Baghdadi got underway on the ground in northwest Syria at 5:01 p.m. ET Saturday, according to a senior US defense official.

Baghdadi’s death was communicated by the special operations forces when they declared “jackpot” at 7:15 p.m. ET, the senior US defense official said. President Trump joined the national security team in the situation room as the operation got underway.

The official said six enemy fighters were killed in the raid and the 11 children, who were safely removed from the house, were turned over to a "responsible" party that had been identified.

The tunnel where the ISIS leader detonated his suicide vest partially collapsed and the forces on the ground had to recover the remains from the rubble while being cautious about any improvised explosive devices, the official said. It was only when the US forces were out of harms way did the President tweet good news was coming.

The official also said the US has been “in close touch” with SDF Commander Gen. Mazloum Abdi “about all aspects of what we’re doing.”

“He, his people, and his intelligence sources, played a key role in all of this,” the official said. “It’s a very, very important role. Nobody should underestimate how key the SDF was in all of this.”

The official said Mazloum’s statements about the raid were accurate.

President Trump tweeted a declassified photo of a military dog that participated in the raid on Abu Bakr al-Baghdadi's compound.

A US defense official told CNN that the dog suffered injuries from an electrocution and is recovering.

In his tweet, Trump said that he could not share the name of the dog because that information is still classified.

Earlier today, Army Gen. Mark Milley, chairman of the Joint Chiefs of Staff, also declined to name the military dog who played a role in the raid.

“We’re not releasing the name of the dog right now. The dog is still in theater. The dog, the K-9, the military working dog performed a tremendous service as they all do in a variety of situations. Slightly wounded and fully recovering but the dog is still in theater, returned to duty with its handler. So we are not going to release just yet photos or names of dogs or anything else," Milley said.

He went on to say that former President Barack Obama did exactly the same thing when al Qaeda leader Osama bin Laden was killed.

"I was not called in advance then, nor did I expect to be called in advance now," McConnell said. "What happened after the Osama bin Laden attack was the Vice President let me know and the administration attempted to let me know. I didn’t connect with them before the President’s press conference but they attempted to let me know before he went public. So the two situations were handled exactly the same from my point of view."

The Syrian Democratic Forces (SDF) had an informant in ISIS who lead them to the location where ISIS leader Abu Bakr al-Baghdadi was hiding, SDF spokesperson Mustafa Bali tells CNN.

The informant also obtained Baghdadi’s underwear and blood sample that was used for the DNA test to confirm his identity before the raid took place.

A senior State Department official told reporters Monday that the ISIS spokesperson Abu al-Hassan al-Muhajir was killed by US forces in Aleppo province near Jarablus.

The official described al-Muhajir as both a spokesperson and “kind of a number two” to Abu Bakr al-Baghdadi, the ISIS leader who was killed during a US raid.

Asked about President Trump’s comments on Sunday describing ISIS leader Abu Bakr al-Baghdadi as “crying” and “whimpering” shortly before his death, Joint Chiefs of Staff Chairman, Gen. Mark Milley, said, “I don’t know what the source of that.”

Milley added he believed Trump had planned to talk to members of the unit that carried out the raid that resulted in Baghdadi’s death.

“I assume it was talking directly to unit members,” Milley said of Trump’s comments.

Milley said he had not yet spoken to members of the unit and had not heard that characterization himself.

On Sunday, Secretary of Defense Mark Esper said he also had not heard Baghdadi’s last moments characterized that way.

"We should take this moment to remember the victims and families of victims of terrorism everywhere in the world," Haq said. 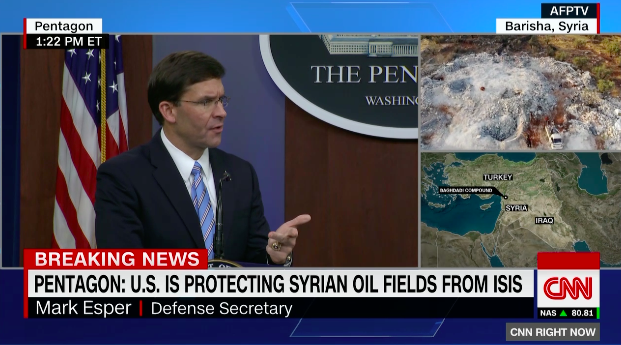 Defense Secretary Mark Esper said today that the US military will maintain a presence in Syria for the time being following the Baghdadi raid in order to protect oil fields from being seized by ISIS fighters.

Asked if this will mean the number of US troops will increase in Syria, Esper responded, "At the end of the day, we will be sending troops home."

"The President made a commitment to do that. But in the meantime, we're going to make some other moves to ensure that we can accomplish that mission of securing the oil fields in order to deny them access to ISIS," Esper said.

Asked to clarify if he means that the number of US troops in Syria will go up in order to run the operation to protect the oil, Esper responded, "No, no, no, at the end of the day, my expectation is it will be fewer than we have before."

Pressed by CNN's Barbara Starr on whether the US will also prevent any Russian or Syrian forces from gaining access to the oil, Esper said, “The short answer is yes, it presently does. Because in that case, we want to make sure that SDF does have access to the resources in order to guard the prisons, in order to arm their own troops, in order to assist us with the defeat-ISIS missions. So that’s our mission, is to secure the oil fields.”