Our live coverage has ended. Scroll through the posts below to see how the committee vote unfolded or follow CNN Politics.

The Department of Justice called the vote to hold Attorney General William Barr in contempt of Congress "politically motivated and unnecessary."

"It is deeply disappointing that elected representatives of the American people have chosen to engage in such inappropriate political theatrics," department spokesperson Kerri Kupec said in a statement.

“The accommodation process between co-equal branches of government is supposed to be a two-way street. Unfortunately, the only side who has made accommodations is the attorney general, who made extraordinary efforts to provide Congress and the public with information about the special counsel’s work. The attorney general could not comply with the House Judiciary Committee’s subpoena without violating the law, court rules, and court orders, and without threatening the independence of the Department’s prosecutorial functions. Despite this, the Department of Justice engaged with the committee in good faith in an effort to accommodate its stated interest in these materials. Unfortunately, rather than allowing negotiations to continue, chairman Nadler short-circuited these efforts by proceeding with a politically motivated and unnecessary contempt vote, which he refused to postpone to allow additional time to explore discussion and compromise. It is deeply disappointing that elected representatives of the American people have chosen to engage in such inappropriate political theatrics. Regrettably, chairman Nadler’s actions have prematurely terminated the accommodation process and forced the President to assert executive privilege to preserve the status quo. No one, including chairman Nadler and his committee, will force the Department of Justice to break the law.” 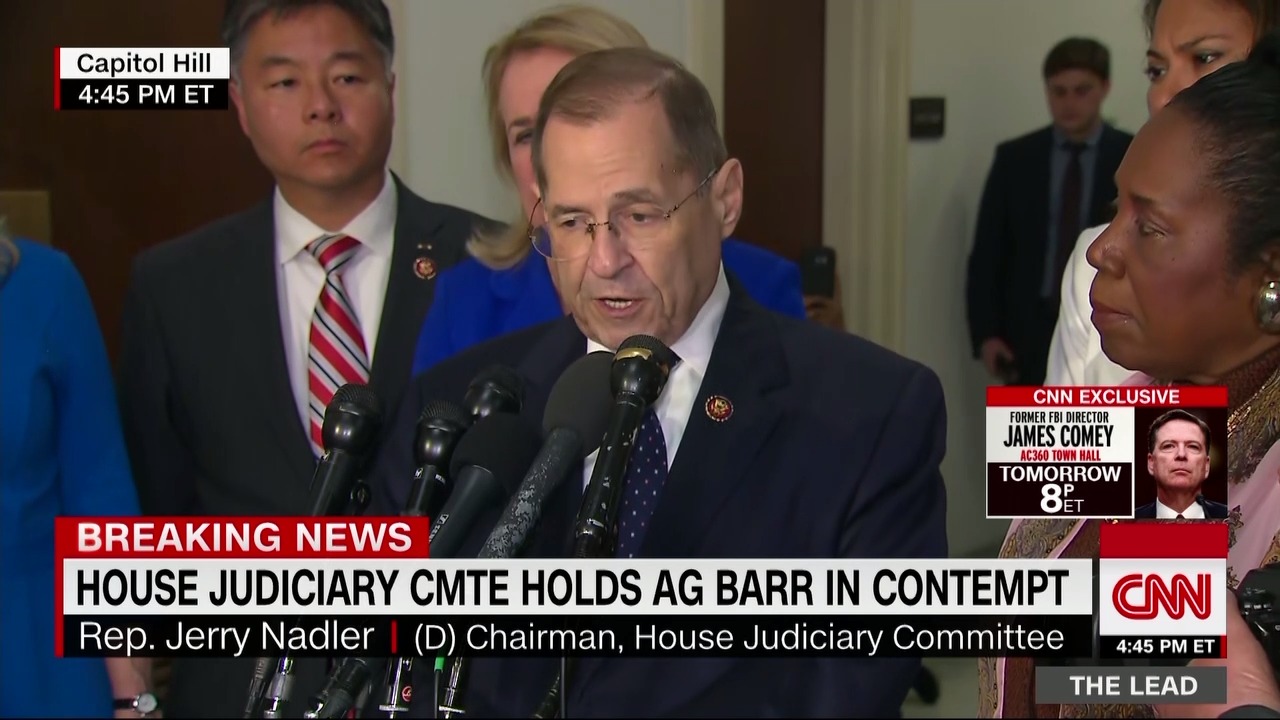 He went on to say the committee had no other choice but to take this action.

"This was a very grave and momentous step we were forced to take today to move a contempt citation against the attorney general of the United States. We did not relish doing this but we have no choice. Attorney General Barr having proved himself to be the personal attorney to President Trump rather than to the United States by misleading the public as to the contents of the Mueller report twice, by not being truthful with Congress has not shown himself to be the personal attorney of the United States rather than the attorney general," Nadler said.

The Democratic congressman accused Barr of turning the Department of Justice "into an instrument of Trump personally rather than an instrument of justice and representative of the United States."

"We are now in a constitutional crisis," Nadler declared. 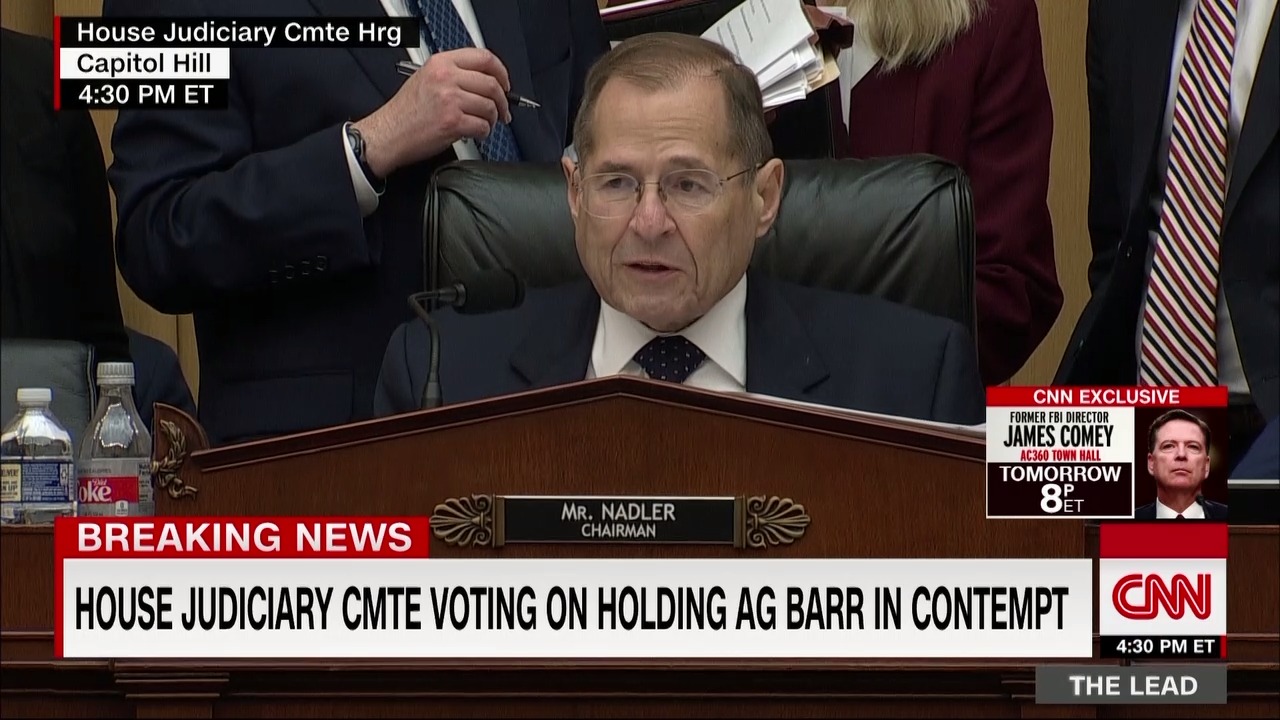 The House Judiciary Committee just voted along party lines to hold Attorney General William Barr in contempt of Congress, escalating the looming constitutional collision over the Mueller report between congressional Democrats and the Trump administration.

What happens next: The contempt resolution now moves to the full House for consideration.

Barr was held in contempt for not complying with the committee’s subpoena for the unredacted Mueller report and underlying evidence. The contempt vote came after President Trump asserted executive privilege this morning over the materials that the committee had subpoenaed, following through on a threat the Justice Department made last night if the committee moved forward with the contempt vote.

The House Judiciary Committee is voting right now on whether it will hold Attorney General William Bar in contempt of Congress after the Justice Department declined to provide an unredacted version of the Mueller report to Congress.

This marks the first time that House Democrats are moving to punish a Trump administration official for defying a congressional subpoena and represents a dramatic escalation in tensions between Democrats and the White House.

The House Judiciary Committee has adopted an amendment from chairman Jerry Nadler adding a section to the contempt report that responds to President Trump's assertion of executive privilege.

The amendment passed along party lines.

Why this matters: Earlier today, the Justice Department informed Nadler that the “President has asserted executive privilege over the entirety of the subpoenaed materials."

What happens next: The committee is now in recess until 2:30 p.m. ET, when Nadler said they would resume the markup.

“They’re asking for information they know they can’t have. The attorney general is actually upholding the law,” Sanders said, adding, “Chairman Nadler is asking the attorney general of the United States to break the law and commit a crime by releasing information that he knows he has no legal authority to have. It’s truly outrageous and absurd what the chairman is doing and he should be embarrassed that he’s behaving this way.”

She attacked Nadler’s understanding of the law, saying that she feels she “(understands) it better than he does.” 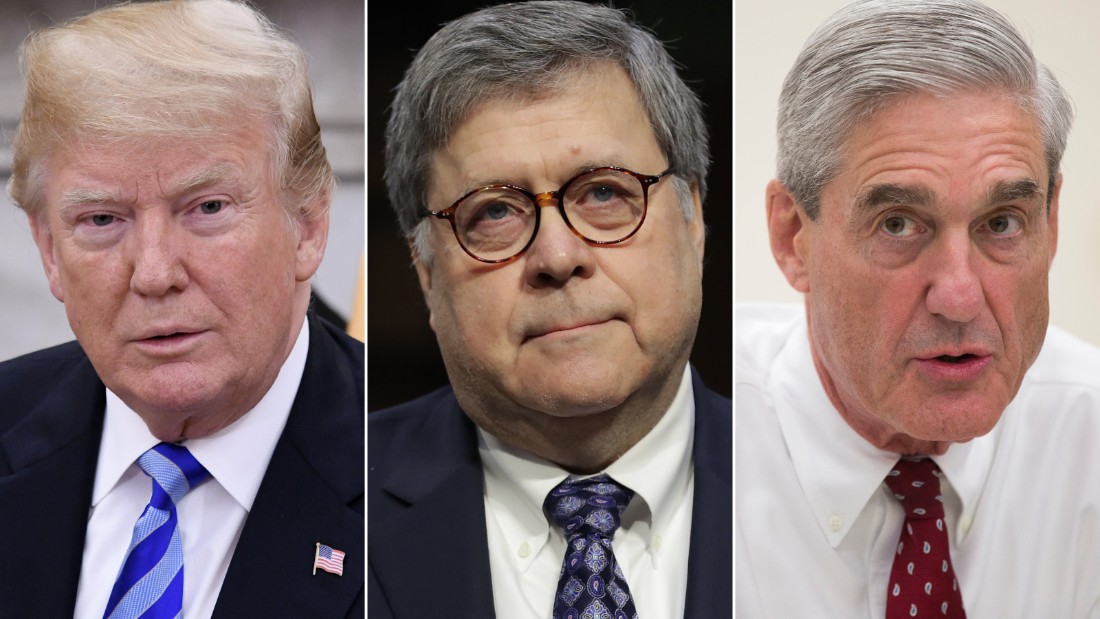 White House press secretary Sarah Sanders was just asked how the invocation of executive privilege affects the President's position on special counsel Robert Mueller testifying and if Mueller’s employment with DOJ might be extended under the circumstances.

She said she wasn’t aware of anything new on that.

Some context: On Sunday, President Trump reversed course and said Mueller should not testify before Congress. That remark came just two days after he told reporters that the attorney general should make that decision.

“The President’s made his feelings on that very clear,” Sanders said today. “This is over, and just because the Democrats didn’t like the result doesn’t mean they get to redo this process."

The special counsel’s office would not comment when CNN asked if his employment is being extended under the circumstances.

The White House now says there will be no press coverage of the President’s cabinet meeting, which was scheduled for 11:30 a.m. ET.

The next time we see the President is at 3:25 p.m. ET when he departs for Florida.