The inauguration of Joe Biden

Our live coverage has ended. Read and watch below to see how the day unfolded.

Kamala Harris is set to make history as the first female, first Black and first South Asian vice president, and she will take her oath in the color purple as a nod to Shirley Chisholm, the first African-American woman to run for president.

"Kamala Harris is wearing purple, something pretty significant to her. When she ran for president, one of her colors of her campaign was purple and yellow. That is a nod to Shirley Chisholm who ran for president as a black woman decades ago and has inspired her political career," CNN's Abby Phillip reports.

Chisholm campaigned for the Democratic Party presidential nomination in 1972.

"You see Kamala Harris nodding to this major moment in American history for so many women, people of color, for her sorority sisters in Alpha Kappa Alpha, incorporated."

Kamala Harris is expected to take her oath of office today using two Bibles; one that previously belonged to a former neighbor and family friend of Harris’, Regina Shelton, and another that belonged to Thurgood Marshall, the first African American to serve on the Supreme Court, according to a Harris aide.

She will be sworn in by Supreme Court Justice Sonia Sotomayor.

Harris has described Shelton as a second mother to her. She and her sister Maya often visited Shelton's house after school while their mother, the late Shyamala Gopalan, was still at work as a breast cancer researcher. Harris used Shelton's Bible to take the oath of office to be attorney general of California and later to become a United States senator.

"In office and into the fight, I carry Mrs. Shelton with me always," Harris wrote in an op-ed for Bustle about Shelton titled, "Without This Woman, I Wouldn't Be The Senator I Am Today."

Harris has often said that Marshall was one of the inspirations for her legal career and has described him as a "childhood hero of mine."

The vice president-elect said in a video posted to Twitter in July, "Thurgood Marshall and the work that he did is ... really one of the main reasons I wanted to be a lawyer. Thurgood was a fighter, he was a boxer in the courtroom."

Harris will make history as the first female, first Black and first South Asian vice president, and she will be sworn in by the first Hispanic and third female justice in US Supreme Court history, Sonia Sotomayor.

President-elect Joe Biden was just introduced for his inauguration at the US Capitol and is set to be sworn in as the 46th President of the United States.

Biden fist-bumped with Obama as he passed the former president.

Commercial flights at Washington Reagan National Airport are halted until after President-Elect Joe Biden takes the oath of office, according to the Federal Aviation Administration.

The FAA instituted a ground stop from 10:30 a.m. ET to 12:15 p.m. ET for the inauguration, according to FAA data. The agency also issued a bulletin to pilots.

Flights bound for Washington are being held at the origin airport, the FAA said.

Aviation security has been a particular concern leading up Inauguration Day, and the already-secure airspace around Washington, DC, is more secure today. Flights that aren’t commercial, police, or military are being kept outside a 30-mile ring around the district.

In the days before and after the Jan. 6 attack on the Capitol, videos on social media showed passengers harassing flight crews and fellow travelers. The FAA said it would enact a zero-tolerance policy against unruly in-flight behavior by passengers and issue fines of as much as $35,000.

President Trump kept an eye on the inauguration proceedings on his way to Palm Beach, a person on board the flight tells CNN.

The Trumps walked off Air Force One shortly after Vice President Mike Pence walked in to the ceremony at the US Capitol, where Joe Biden is about to be sworn in. 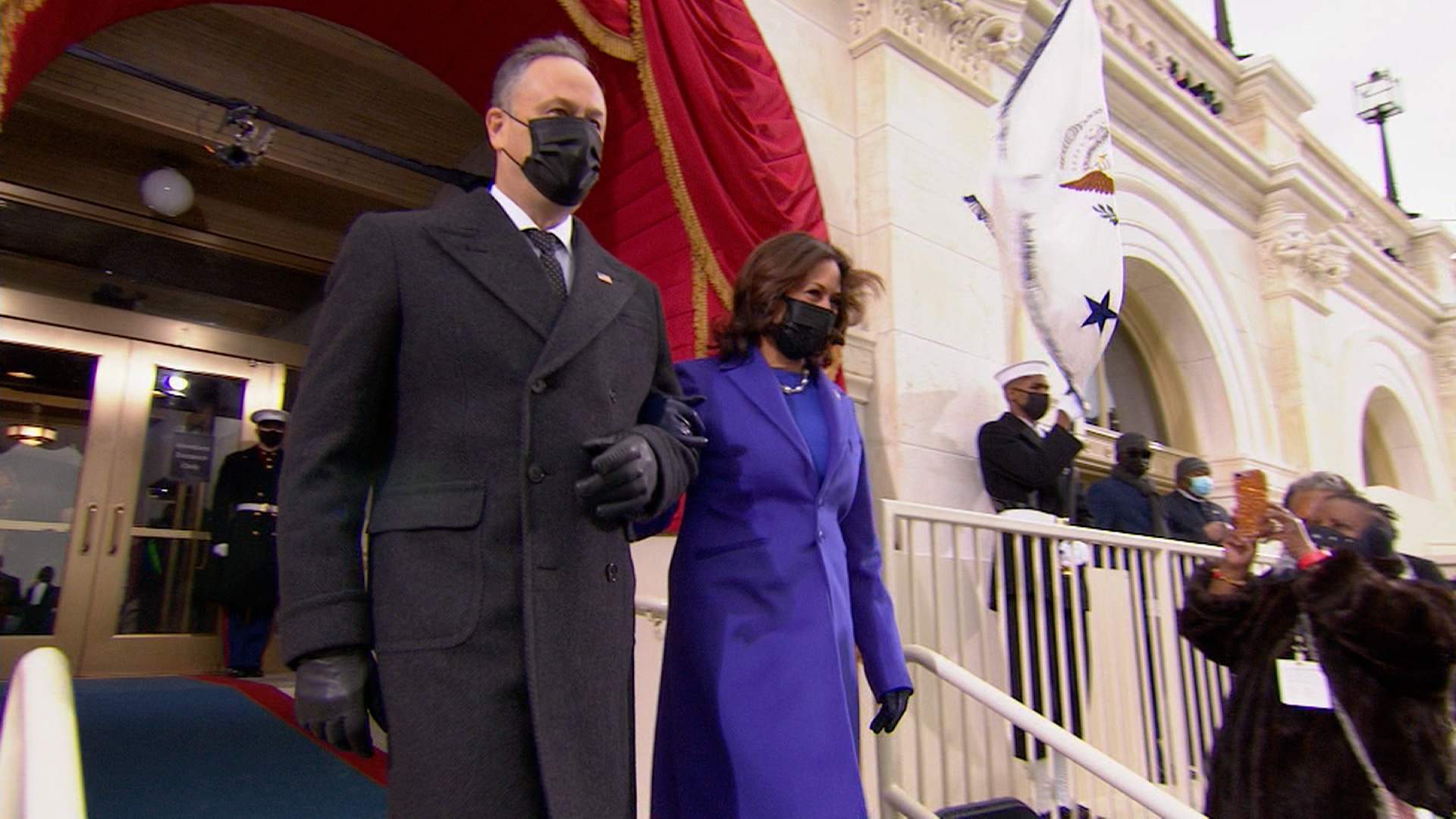 Vice President-elect Kamala Harris was just introduced at the inauguration ceremony. She's being escorted by Capitol Police office Eugene Goodman, who has been hailed as a hero after video emerged of him guiding the violent mob away from the Senate chamber during the Capitol riot.

Harris is taking her seat alongside her husband, Doug Emhoff.

In addition, Harris will be sworn in by Supreme Court Justice Sonia Sotomayor, the first Hispanic Justice in the court’s history.

Sotomayor was nominated to the Supreme Court by former President Barack Obama in 2009. Like Harris, Sotomayor broke barriers throughout her career. She is the third female justice in US Supreme Court history, and she was the first Hispanic person to be appointed to the federal bench in New York.

Harris honored Sotomayor in 2019 during Hispanic Heritage Month with the following tweet:

President Trump is not there. He is the first outgoing president to skip his replacement's inauguration in more than 150 years.

President Trump and the first lady have just landed in Florida.

Trump had a short farewell ceremony at Joint Base Andrews earlier this morning. In brief, unscripted remarks, he promised to "always fight" and wished the incoming Biden administration "great luck."

“You are amazing people. This is a great, great country. It is my greatest honor and privilege to have been your President,” Trump said to a crowd of his family and staff.