Our live coverage has ended for the night. For the latest, follow CNN Politics. 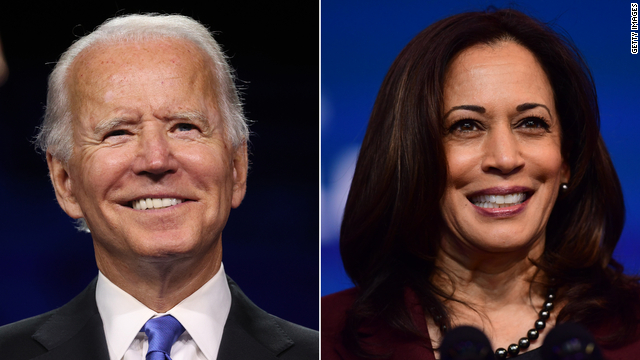 President-elect Joe Biden and Vice President-elect Kamala Harris' transition team announced that their first-day agenda will include the signing of executive orders.

Biden will also swear in "day one presidential appointees" in a virtual ceremony, according to a news release.

Here's a look at Wednesday's schedule:

A schedule sent to National Security Council staff Tuesday night, and obtained by CNN, shows more than three dozen members of Joe Biden's incoming NSC staff plan will be in place by midday on Wednesday when the President-elect is sworn in.

The schedule shows that some of the staffers will arrive at the White House as early as 10 a.m., two hours before the swearing in, a sign the work could begin from the first minute President-elect Joe Biden takes office.

Among those with a 10 a.m. scheduled arrival time is Lisa Monaco who is serving as a homeland security adviser around the inauguration, overseeing high-level security coordination around the event.

Unlike those who have been tapped to run the federal agencies, NSC staff does not require Senate approval and can immediately get started.

President Trump has decided to pardon his former chief strategist Steve Bannon in a last-minute decision made only hours before he is scheduled to depart the White House for a final time.

Officials cautioned CNN that Trump's decision was not final until he signed the paperwork.

Trump told people that after much deliberation, he had decided to pardon Bannon as one of his final acts in office.

In her closing remarks in tonight’s "We Are One" event, Harris thanked her fellow alumni from Historically Black Colleges and Universities and spoke specifically to Black children who may be tuning into the virtual event.

“I especially want to thank my HBCU brothers and sisters, my beloved Alpha Kappa Alpha, and our divine nine family. I wouldn't be here if it weren't for all of you and those who came before us. We are family. And though we cannot gather in person tonight, know that I carry each of you with me as I embark on this journey,” Harris said.

“Let me also say something directly to every little girl and boy who should also see themselves in this moment. I may be the first woman, I may be the first black person to hold this office, but I will not be the last,” Harris continued. “So, dream with ambition, lead with conviction and see yourselves as future leaders and as the very best of our country because that's who you are.”

Abrams, former Georgia gubernatorial candidate and Fair Fight founder, also spoke about her state’s role in putting Joe Biden and Harris over the top in November, and her state’s historic runoff election that altered the balance of power in the US Senate.

“And what we are seeing happen in this nation today, what we saw happen in Georgia, first in November and again in January, is the compulsion to come together, the commitment to be one, to have a nation that sees us all that serves us all,” Abrams said. “And, so it was with incredible delight and pride that we delivered 16 electoral college votes from the great state of Georgia to Joe Biden and Kamala Harris, it was with extraordinary joy and deep personal pride that we are sending you Senator-elect Raphael Warnock who will be sworn in tomorrow, along with Senator Jon Ossoff,” Abrams continued.

“It is with extraordinary gratitude that we say thank you to an administration that has already started to show us what leadership looks like again," she added.

Warnock, one of Georgia's new senators-elect, opened the event with a prayer.

The White House schedule is out for the last day of President Trump’s term and it’s somewhat vague, listing only the President’s departure time of 8 a.m. ET.

There is no mention of the send-off ceremony scheduled at Joint Base Andrews that is expected to take place shortly after he and first lady Melania Trump leave the White House aboard Marine One.

His schedule says, "The President and The First Lady will depart the White House at 8:00AM for Palm Beach, Florida."

President Trump has raised the idea of starting a new political party in recent days, a senior Trump adviser confirmed. The adviser immediately dismissed the idea as not serious.

A separate White House adviser said the prospect of launching a new party was "lame." Another aide noted Trump is disgusted with Senate Republicans who will soon decide whether the ex-president should be convicted during his impeachment trial.

It's unclear how determined Trump is to begin his own political party. In his farewell message video, Trump vowed his movement will carry on. The latest polls, including one from CNN, find Trump with the lowest approval ratings of his presidency. He is leaving office deeply unpopular.

The Wall Street Journal first reported Trump's interest in a new party, saying he would call it the "patriot party."

On the eve of the inauguration of President-elect Joe Biden and Vice President-elect Kamala Harris, filmmaker Ken Burns said he felt "like tonight is New Year's Eve. I think we just got the dates wrong."

"I think we got a new possibility of turning a new leaf," Burns told CNN's Anderson Cooper, reflecting on the upcoming administration. "There is a real optimism there."

Burns, an award-winning documentary filmmaker who spent most of his career documenting American history, went on to compare the President-elect to former President Franklin D. Roosevelt.

"We have the oldest president in an FDR moment and this is a man who is tempered by loss," Burns said. "Just as FDR, a kind of thin ambitious guy is stricken with polio and develops an empathy that allows him to guide us through the depression and the second World War, Joe Biden's political career begins with unspeakable loss and has had unspeakable loss just recently and he's been able to turn that into something positive."

"You have to make sure that no one feels like they're extraneous and so much of this is about people having their problems magnified in a negative way and Joe Biden is the opposite of that. He reminds you, we're all in this together and that's the only way we get through it and that's how this American carnage ends."

Harris thanked the AAPI community for their support during the campaign and pledged to continue supporting them after she is sworn in as vice president on Wednesday.

“I am proud to be with you tonight as our nation's first vice president-elect of Asian descent. My story is the story of millions of Americans, my mother Shyamala Gopalan arrived in the United States from India, she raised my sister Maya and made to know that though we may be the first, we should not be the last,” Harris said.

“I carry you all with me, I could not be more grateful for your continued support at this moment, and I cannot wait to see all that we will accomplish together," she added.

The incoming second family — Vice President-elect Kamala Harris and her husband Doug Emhoff — will walk the Pences to their motorcade after the inauguration ceremony at the US Capitol tomorrow, a source familiar with inauguration planning said.

Four years ago the Pences were the ones who walked the Bidens to the motorcade, as they took the office and the Bidens left Washington.

This is in keeping with past protocol but is notable because the traditional walk with the first and second family to Marine One will not happen tomorrow as President Trump has decided to shun the inauguration and return to Florida before his term ends.