Former Vice President Joe Biden said Wednesday that President Donald Trump awarding conservative radio personality Rush Limbaugh the Presidential Medal of Freedom was more about maintaining his right-wing political base than anything else.

First lady Melania Trump placed the medal on Limbaugh during Trump’s State of the Union address in a surprise move on Tuesday, one day after Limbaugh publicly revealed he has advanced lung cancer.

“Rush Limbaugh will spend his entire time on the air dividing people, belittling people, talking about how, talking about blacks in ways, African Americans in ways that — anyway, I do feel badly, and I mean this sincerely, that he's suffering from a terminal illness. So he has my empathy and sympathy no matter what his background is,” Biden said.

“But the idea that he … receives a medal that is of the highest honor that can committed, given to a civilian, I find, quite frankly, driven more by trying to maintain your right-wing political credentials than it is anything else,” Biden said.

Biden himself was awarded the Medal of Freedom by then-President Barack Obama in 2017. Biden served as Obama's vice president.

“I mean, if you read some of the things that Rush has said about people, their backgrounds, their ethnicity, how he speaks to them. I don't think he speaks, I don't think he understands the American code of decency and honor,” Biden said.

“But, look, this is Donald Trump," Biden said. 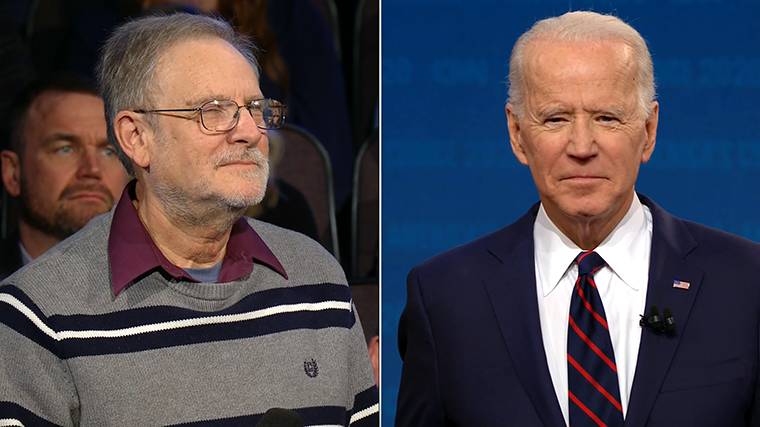 Faced with Sen. Bernie Sanders' criticism of his record on Social Security, former Vice President Joe Biden promised to protect and expand the program, then called out Sanders' supporters for distorting his position in a misleadingly edited video.

Biden touted his own campaign's plan before responding to a single clip in which he appears to be agreeing with former GOP House Speaker Paul Ryan.

"Well I just have (doubters) look at the facts," Biden said. He then cited Politifact, which wrote that the video in question "misrepresented my position on Social Security."

"Whether he did it or not, his supporters put out a clip that took out of context what I said," Biden said. The Sanders campaign played up the video, but did not cut or create it.

"Folks, I’ve been a strong supporter of Social Security my whole career," Biden added, "and the fact of the matter is I’m the one that has a concrete as to how to make it work and I think I can get it done."

Still, beyond the controversial clip, the questions over his past record are less easy to answer.

Many high-ranking Democrats in the 1980s and 1990s -- like Biden -- sought to signal their seriousness about the deficit by expressing a willingness to negotiate with the GOP over plans to slow its growth or raise the retirement age.

Despite having gone on the record in the past decades saying he would be willing to buck his party to strike a bipartisan deal on Social Security, Biden drew a clear line on one of the most aggressive GOP proposals: The George W. Bush administration quickly abandoned a 2005 move to privatize it.

Iowa is a marquee state for candidates hoping to generate momentum, but Biden minimized the state’s impact, pointing out that it awards a tiny share of the overall number of delegates required to win the Democratic nomination.

The former vice president is addressing New Hampshire Democrats and independents who say they are going to vote in Tuesday's primary, as well as Saint Anselm College students.

Ahead of Wednesday night's town hall, Joe Biden warned attendees at an event that Vermont Sen. Bernie Sanders would hurt Democrats running in down ballot elections because he is a democratic socialist. And he admonished former South Bend, Indiana, Mayor Pete Buttigieg for what he described as criticism of President Barack Obama's presidency.

The attacks come after a poor showing in Iowa for the former vice president.

Biden's comments were a notable shift in tone for the former vice president, who had a disappointing showing in Iowa behind Buttigieg, Sanders and Massachusetts Sen. Elizabeth Warren. Buttigieg is currently leading the Iowa caucus with 71% of precincts reporting, with Sanders close behind.

Four candidates will speak to New Hampshire voters on Wednesday night. All times are ET: 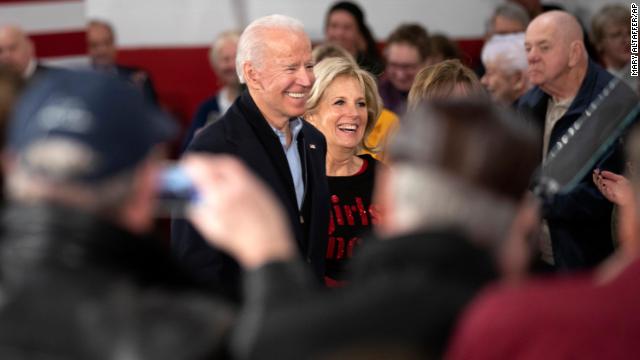 The Democratic presidential race has shifted to New Hampshire, with the full field of 2020 contenders blanketing the state ahead of its Tuesday primary.

But in Iowa, they're still counting, after technical issues with the app used to report results led to a complete breakdown on caucus night.

They're followed by Massachusetts Sen. Elizabeth Warren at 17.9%, former Vice President Joe Biden at 15.9% and Minnesota Sen. Amy Klobuchar at 12.1%.