Even as Vice President Mike Pence formalized his position that he cannot overturn the results of the election, President Trump continued to pressure him to break the law and decertify electoral college votes.

"Mike Pence, I hope you're going to stand up for the good of our Constitution and for the good of our country. And if you're not, I'm going to be very disappointed in you," Trump said on the Ellipse, moments before Pence released his letter declaring he had no "unilateral" authority to reverse the results.

Trump acknowledged Pence was not likely to follow his demands.

"It is my considered judgment that my oath to support and defend the Constitution constrains me from claiming unilateral authority to determine which electoral votes should be counted and which should not," Trump continued holding out hope.

"So I hope Mike has the courage to do what he has to do and I hope he doesn’t listen to the RINOs and the stupid people that he’s listening to," Trump said.

Rep. Paul Gosar objected the the counting of the electoral votes in Arizona. He was joined by other representatives and senators.

What happens now: The objections will extend the normally ceremonial process of counting Electoral College votes into Wednesday evening and possibly beyond.

For each state where a House member and senator object, the two chambers will separately recess and debate the matter for up to two hours, followed by a vote on whether to accept or reject the objection.

Remember: While some GOP lawmakers are expected to object to several states' electoral results, those objections will not change the results of the election.

Every Democrat and some Republicans will reject the challenges in both chambers, including Senate Majority Leader Mitch McConnell.

Trump claimed that, in Pennsylvania, there were "205,000 more ballots than you had voters."

Facts First: False. There were not more votes than registered voters in Pennsylvania; state officials and fact checkers have repeatedly explained that this claim is false. Trump appeared to be invoking an incorrect figure from a Republican state legislator who had relied on incomplete data.

The four lawmakers who will serve as “tellers” who will read aloud the electoral votes from every state are Republican Sen. Roy Blunt of Missouri, Democratic Sen. Amy Klobuchar of Minnesota, Republican Rep. Rodney Davis of Illinois and Democratic Rep. Zoe Lofgren of California.

Klobuchar’s national profile was elevated last year when she ran for president herself during the 2020 election cycle in the Democratic primary, but she ended her presidential bid in March of that year and endorsed Joe Biden, whose electoral votes she’ll be reading today.

Lofgren has served in high-profile roles before during major congressional events. In 2020, she was one of the impeachment managers from the House who presented the case from that chamber during the Senate impeachment trial of President Donald Trump.

Davis has served in the House representing the thirteenth congressional district of Illinois since 2013.

Trump claimed that the election “was over at 10 o’clock in the evening” on Election Night, when he had leads in the vote counts in Georgia, Michigan and Pennsylvania, but then “explosions of bulls---” occurred.

Facts First: It is obviously false that the election was over at this early stage of the counting process. There is a simple explanation for Trump's big initial leads in some states he ended up losing, including Georgia, Pennsylvania and Michigan: he led because many mail-in ballots had not yet been counted. There is no indication he lost the leads for any suspicious reason.

Media outlets and political analysts had noted for weeks prior to Election Day that we were likely to see a "red mirage" in which Trump would initially appear to be up big in some states that counted mail-in ballots last. Mail-in ballots favored Biden so heavily in large part because Trump had regularly discouraged his own supporters from voting by mail.

In a number of states, legislatures disallowed election officials from processing votes early, leading to delays.

According to Trump, "if Mike Pence does the right thing, we win the election." He added, "all Vice President Pence has to do is send it back to the states to re-certify," which Trump claimed Pence has "the absolute right to do."

Facts First: This is totally false. There's nothing in the law about Pence doing anything but calling on tellers and announcing the results. The Constitution only gives him the power to count the votes.

According to CNN contributor and law professor Steve Vladeck, Trump's claim is "just not true."

"There’s no discretion on [the Vice President's] part, nor has any Vice President previously claimed the power to reject any properly formatted certificates," Vladeck told CNN.

Even the President's longtime attorney Jay Sekulow has said Pence doesn't legally have the authority to trigger such an outcome.

“Some have speculated that the Vice President could simply say, ‘I'm not going to accept these electors,’ that he has the authority to do that on the Constitution. I actually don't think that's what the Constitution has in mind. If that were the case, any vice president could refuse any election,” Sekulow said on his radio show this week, adding that Pence’s role is “more of a ministerial procedural function.

The joint session of Congress to certify the Electoral College vote results and affirm President-elect Joe Biden's win has begun.

What comes next: Four lawmakers designated as "tellers" — two from the House and two from the Senate — will read off the certificates of vote from each state. They'll do it alphabetically starting with Alabama.

The process usually takes about an hour, but this year it could go many hours because some Republicans plan to object to certain states — a step that will force up to two hours of debate for each state.

All of those objections will be voted on, and are expected to fail.

Vice President Mike Pence just released a statement on his role at today's joint session of congress, where lawmakers will certify the electoral results of the presidential election.

President Trump has pressured Vice President Mike Pence and Republican lawmakers to overturn the election results – something they cannot do. 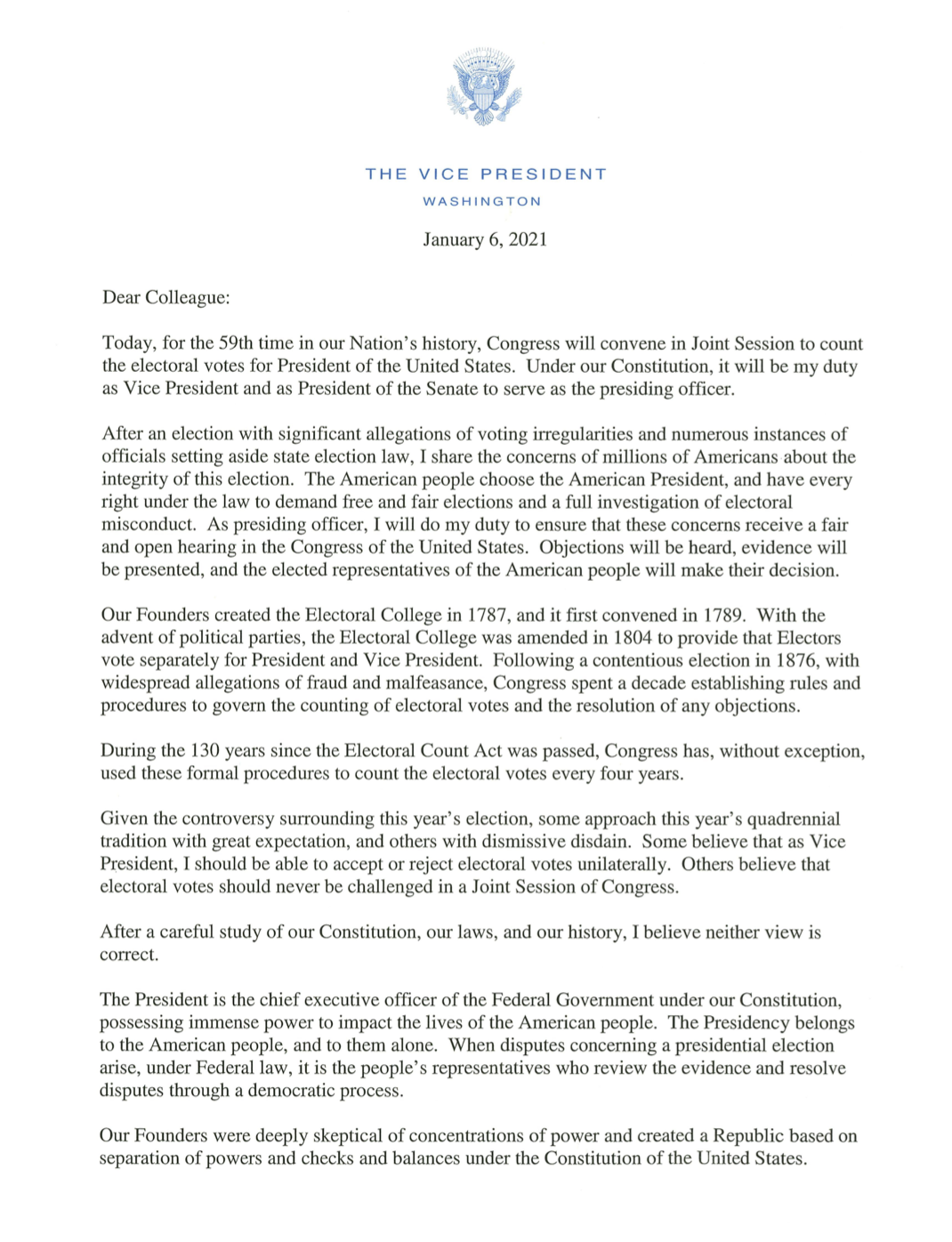 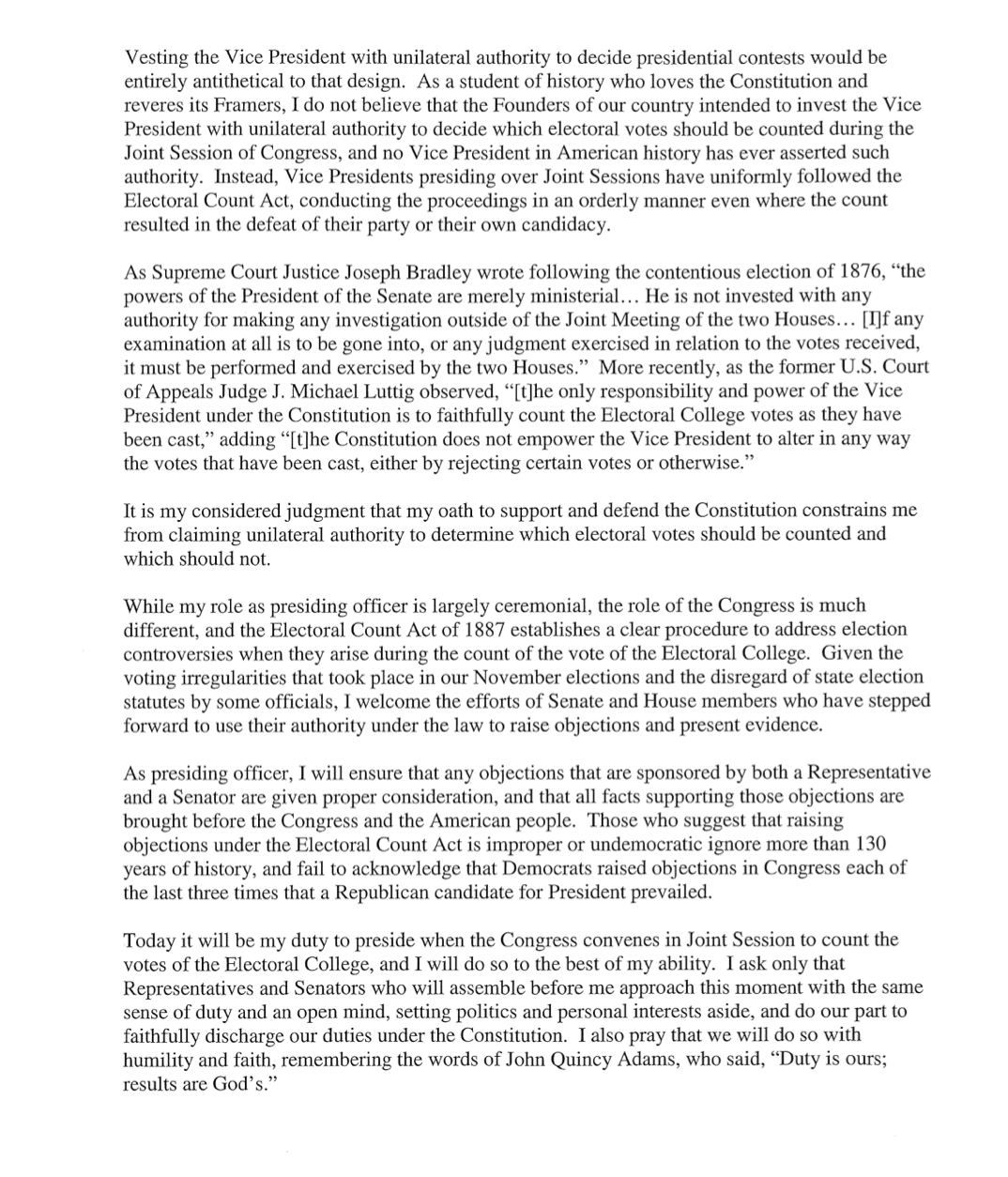 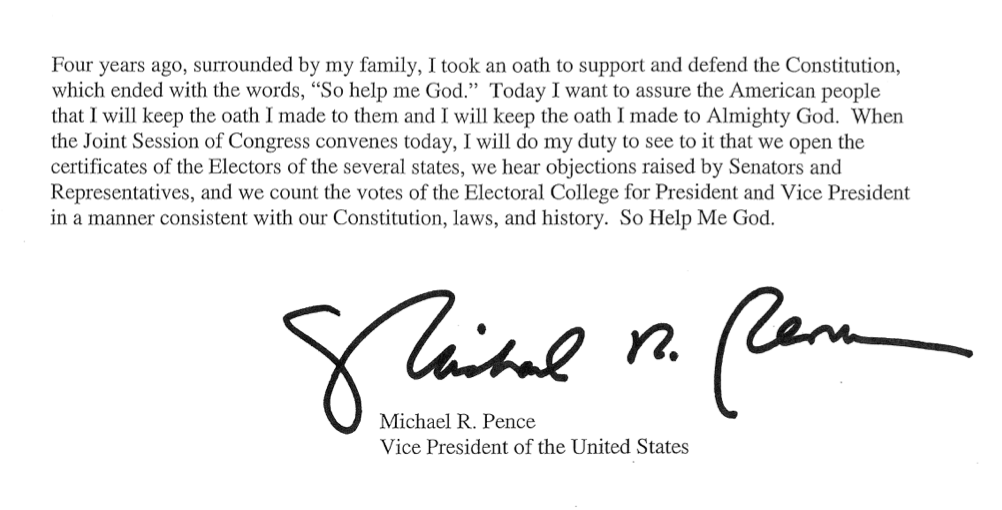 Vice President-elect Kamala Harris will be on hand today as Congress counts the Electoral College votes in a joint session.

In her role as senator of California, Harris will be voting today, but she is not planning to speak during today’s proceedings, a source familiar with the plans said.

Harris was slated to attend a classified Senate intelligence committee hearing this morning, before turning to the electoral business later in the day.

“The American people did their job and today she will be there to do hers,” a Harris Senate aide said.