Our live coverage has ended. Read more about the Normandy landings hereand see how President Trump, Queen Elizabeth and other world leaders marked the anniversary here.

Air Force One is wheels down in Shannon, Ireland, for the second time in 24 hours.

President Trump is expected to remain in Ireland until Friday afternoon, when he returns to the United States, ending his European trip.

There are no other official items on Trump's schedule today.

President Trump is departing France after participating in a D-Day commemoration ceremony in Normandy.

Before he left, Trump met with French first responders at the airport.

Trump is en route Ireland, where he will spend another night at his golf course.

He has no remaining public events while in Europe. He’ll return to Washington on Friday.

President Trump remarked upon the “interesting situation taking place” in the United Kingdom the day before Prime Minister Theresa May steps aside.

He predicted “it’ll all work out,” adding that whoever replaces May will be a “very big thing" as the nation grapples with how to proceed with Brexit.

“So I think before you can think in terms of Brexit for the next few weeks, you’re going to have to find out what happens, who’s going to be the new leader and that’s a very interesting situation taking place,” he said, speaking to reporters during a bilateral meeting with French President Emmanuel Macron in Caen, France.

Trump said it was “interesting” to talk to Queen Elizabeth II about the current political situation in the UK, touting his relationship and time spent with Her Majesty during this week’s State Visit and calling her an “incredible lady.”

“I found it to be a very, sort of, an amazing period of time, especially having spent so much time with the Queen, who I think is an incredible lady. But I spent so much time and you know, there’s a lot of question marks as to who’s going to be leading and so it was very interesting talking to her, being with her for so many hours actually."

He continued: “I feel I know her so well and she certainly knows me very well right now, but we have a very good relationship also with the United Kingdom, but it’ll all work out.”

President Trump said he does not have differences with French President Emmanuel Macron over Iran, adding both leaders have the same objective: To stop Iran from obtaining nuclear weapons.

"I don't think we have difference over Iran," Trump said, sitting next to Macron in Caen. "He doesn't want to see them having nuclear weapons."

But note: Trump did not address their differences in achieving that objective. Macron is a staunch supporter of the Iran deal — which Trump pulled out of last year.

"They're doing very poorly... they're failing as a nation and I don't want them to fail as a nation. We can turn that around very quickly," he said.

Macron jumped in to say he thinks “we do share he same objective.”

“We had an instrument until 2025,” Macron said, referring to the nuclear deal, but “we want to go further.”

The Normandy landings involved tens of thousands of troops landing on several beachheads across northern France. Take a look at some of the key features of the operation below. 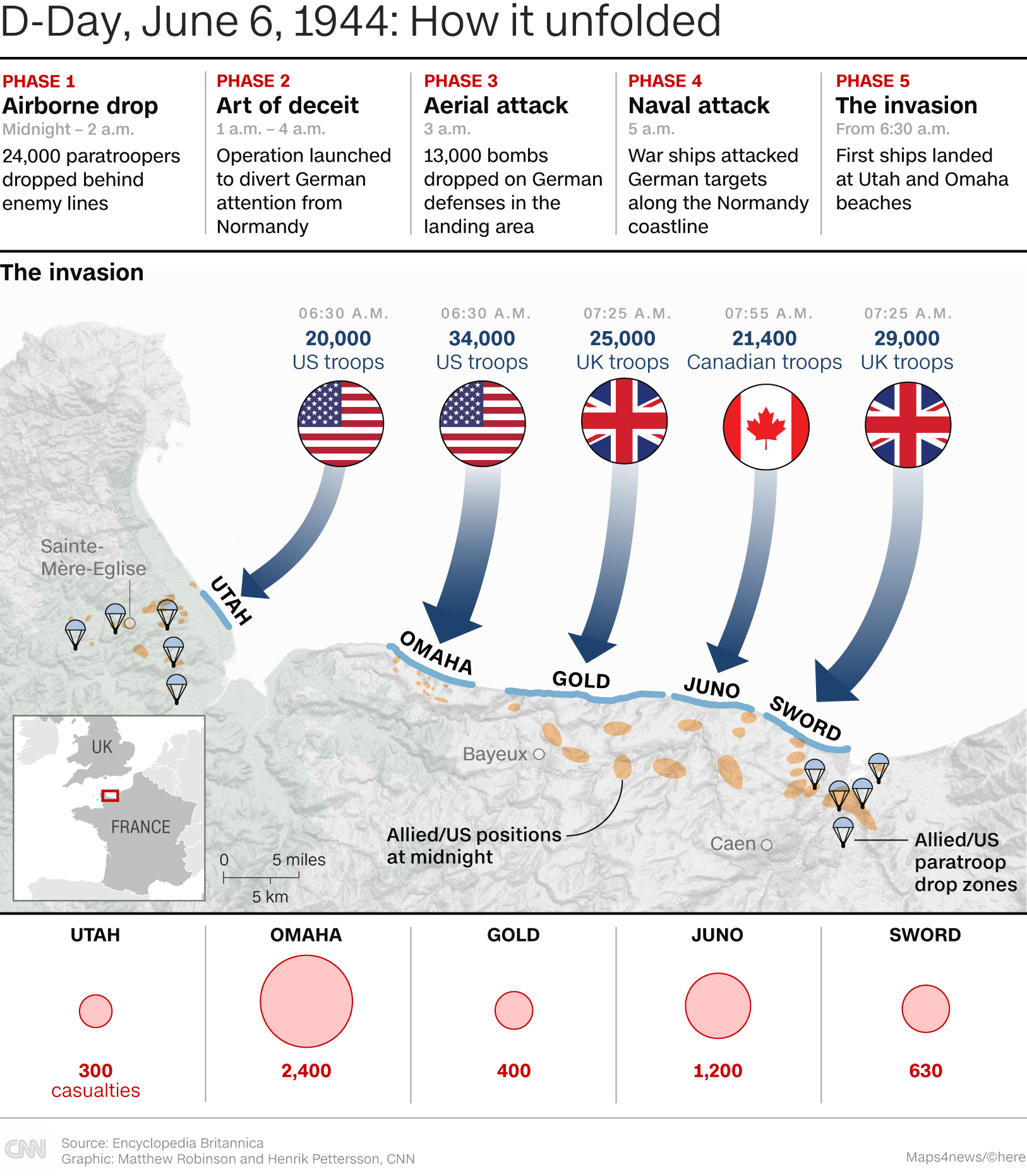 Prince Harry and William have also been marking D-Day, taking part in separate events in the UK.

Harry, the Duke of Sussex, met Chelsea pensioners at the annual Founder's Day Parade in west London. He joked with the elderly servicemen before delivering a speech.

"On this 75th anniversary of D-Day, I can comfortably speak for everyone when I say we are honored to be in the presence of six Normandy landing veterans," Harry said. "To all who are on parade today, I can only say that you are a constant reminder of the great debt we owe those who have served this nation."

Harry's wife Meghan, the Duchess of Sussex, is on maternity leave after the birth of her first child and was not present at the event.

He wrote a personal message which he attached to the poppy wreath: "In memory of all those who have made the ultimate sacrifice. We will remember them. William."

Politics remained largely absent from remarks given by President Trump and Emmanuel Macron by the shores of Omaha Beach.

But while remembrance and recognition dominated proceedings, it wasn't hard to notice a few pointed messages from one leader to another.

The French President urged international support for an "alliance of the free world," before praising the United Nations, the European Union and NATO; three transnational bodies that were set up in the wake of war with the mission of preserving peace.

The only problem? President Trump, sat a few feet from Macron as he spoke, has been critical of all three bodies.

Trump has questioned if NATO is still a relevant alliance and has publicly chastised allies over defense spending. He has praised Brexit, and urged Britain to take a harder line in negotiations with the EU. And his worldview, laid bare in speeches to the United Nations General Assembly, has left several member states worried.

"We must never stop working for the alliance of the free world," Macron said, citing those three bodies as examples. "We must prove ourselves worthy of this heritage of peace that we have been bequeathed."

That task, Macron added, means "never forgetting that free peoples can overcome all the challenges when they unite."

The French leader then turned to his American counterpart, telling him that France is "ready to work for this friendship between our nations which has brought so much to the history of mankind."

Trump's speech was among the most traditional and presidential moments of his administration, CNN's chief political correspondent Dana Bash has said.

“For Donald Trump, so often in the Rose Garden, in big presidential moments, we see him as Donald Trump," said Bash. "But this was different … he moved people, and he did so by understanding exactly what he was supposed to do."

"Instead of trying to use those stories to advance a particular policy, this was advancing a message about bravery, courage and freedom, and I think it was just an extraordinary moment," Acosta said.

Acosta noted that Trump and President Macron will be having a bilateral meeting later on Thursday. "We may find out that they had some disagreements that they discussed away from the cemetery here ... but this was a moment that really rose to the occasion.

"It was an occasion that could have been spoiled by politics and differences between these two leaders, and that just didn't happen," Acosta added.