A dozen Democratic presidential candidates took the stage in Ohio for the fourth debate of the 2020 election, the largest field ever to participate in a single debate.

Read Cillizza's take on why here.

After the debate, Beto O'Rourke was asked if Rep. Alexandria Ocasio-Cortez's endorsement of Sen. Bernie Sanders will change the 2020 race.

"This race is about America and not one faction or part of the Democratic party," he told reporters after the debate.

O'Rourke went on to talk about his record, saying he's shown that he can bring Democrats "in record numbers in Texas" and independents.

Sen. Elizabeth Warren tonight refused to directly explain how she would fund Medicare for All — and many of the other 2020 Democrats called her out for dodging the question.

She was asked about the refusal after the debate. Here's what she told CNN:

She stressed that she's met many Americans struggling to afford medical expenses.

CNN again asked her if her Medicare for All plan means that middle class taxes will go up.

So what Medicare for All describes is the kind of health care coverage we are going to provide as a country. The cost estimates on it are in lots of different places, and they vary by literally trillions and trillions of dollars depending on how this lands. The same thing is true for the revenue streams. So where I am — and I think this is the right place to be -- is to say, look, here's the commitment we need to make. It's a cost commitment. And this is why I talk about — think about what it means if you say to families, go have your health insurance. We're done with you. Yeah, you're done with them until the person I met who needed $125,000 for one treatment to save her life, and her insurance company just looked at her and said no. 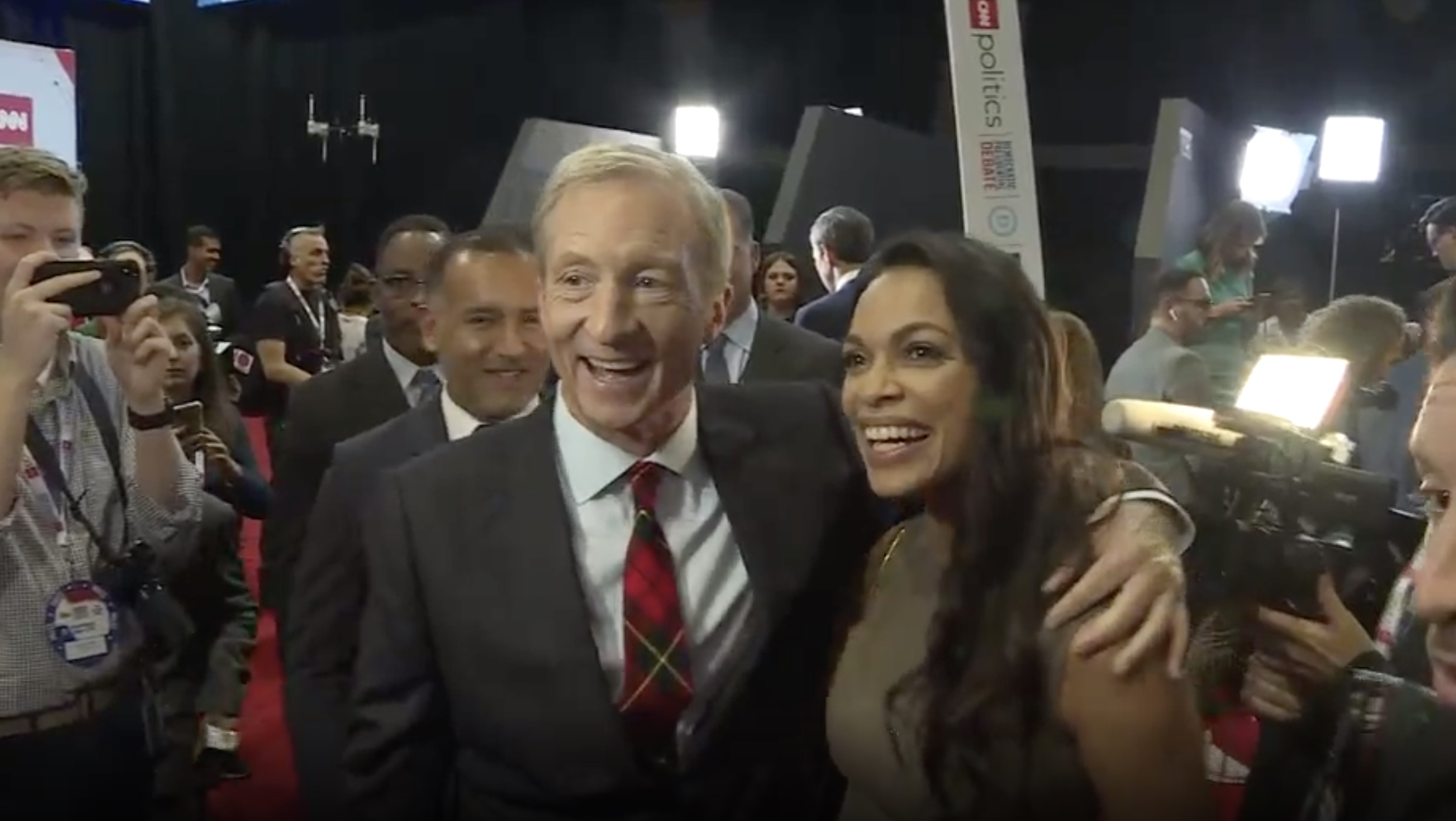 Democratic presidential candidiate Tom Steyer posed for photos with Rosario Dawson inside the spin room, the area candidates go after the debate.

Tom Steyer, speaking to reporters after the debate, said he thinks his background makes him different from the rest of the Democratic candidates.

Steyer, a billionaire businessman, began amassing his fortune in 1986 when he launched his hedge fund Farallon Capital.

"I've been taking on people who broke that government for 10 years and succeeded," Steyer said.

Steyer said he thinks President Trump will run on the economy.

"People are going to want think that whoever the next president is knows about growth, prosperity and shared prosperity," he said.

Many of the 2020 Democrats directly challenged each other tonight. Sen. Kamala Harris said that may have been a symptom of the candidates trying to make their voices heard under challenging debate rules.

"The dynamics on the stage are the reality, I think, and probably a source of frustration for everybody. We get a minute and 15 seconds to have very serious conversations about topics like Syria, health care," she told CNN after the debate.

"And I think the reality, then, is that everyone fights for their time to try and be heard and condense what are complex subjects into a 75-second answer," she added.

Harris was then asked about her calls to get Twitter to suspected President Trump's account. She said his threats are no longer a matter of free speech.

Here's how she put it:

He does not have a right to commit a crime because he is President of the United States. He does not have the right to threaten witnesses and threaten their safety because he is President of the United States. In fact, that's the very problem with Donald Trump. He thinks he's above the law, and we cannot keep reinforcing that. And anyone who wants to say, well, this is a matter of free speech, you are not free to threaten the life of a witness. That is a crime.

Sen. Elizabeth Warren was met swift criticism from her 2020 Democratic rivals tonight as they debated her health care plans.

But Sen. Cory Booker said he wants to remind voters that the Democrats must unite after the primary.

"Look, everybody has to defend their record. But how we do it — what you say about other people often says more about you," he told CNN after the debate when asked about Democrats going after Warren.

He continued: "I just wanted to be one of the people on the stage continuing to remind folks, we can fight over policy issues and which has the better idea. But we must do it in a way that ultimately we can unify at the end of this and be standing together."

Sen. Kamala Harris resurfaced a previous claim that the eight biggest pharmaceutical and insurance companies alone made $72 billion in profits last year while Americans continue to suffer under the opioid crisis.

“The eight biggest pharmaceutical companies and insurance companies last year profited $72 billion on the backs of people like the families that we are talking about that have been overwhelmed by this crisis, which is a public health epidemic,” said Harris. “And they knew what they were doing.”

It’s not the first time that Harris has made the argument. She lodged the complaint back in July while criticizing former Vice President Joe Biden’s health care plan.

Facts First: While it was not clear which companies are part of Harris’ tally, she’s likely in the ballpark, at least according to profit data available for US drug companies as well as numbers on health insurance company profits from the National Association of Insurance Commissioners. However, some context is needed as these profits aren’t derived solely from opioids or from the US market alone.

Ten of the largest US-based drug companies made $69 billion in profits last year. The health insurance industry made a total of $23 billion.

Not all of these profits came from the companies’ operations in the United States.

A report from the National Association of Insurance Commissioners said the health insurance industry generated net earnings of $23.4 billion in 2018.

Here's what he attributed his success to:

"I had an opportunity to demonstrate the message in my campaign and this idea that we can't wait. We have an opportunity on issues from immigration to economics to guns to climate to make something happen. We can not get caught up in purity tests, we can't get absorbed fighting each other. We have a chance to actually make this happen."