Democrats kicked off their quadrennial convention on Monday evening, in a mostly virtual format, hoping to show that they have a broad coalition of backers in November — weaving together speeches that prosecuted the case against Trump, with stories from real people about the fatal toll of the pandemic and personal stories that were meant to provide a window into Biden's personal side.

In case you missed it, here are some highlights from the night’s biggest moments:

Watch some of the night's most memorable moments here.

Former first lady Michelle Obama wrote and practiced her speech to the Democratic National Committee over the last few weeks, said an Obama aide, who described the remarks as “immensely personal for her.”

A speechwriter helped Obama in writing the speech that capped off the first night of the convention, but the aide said that the former first lady knew clearly what she wanted to say, despite wishing to avoid dipping her toe back into politics.

“As she said, she hates politics so would and much rather not have had to do this, but she felt compelled by what’s at stake,” the aide added. 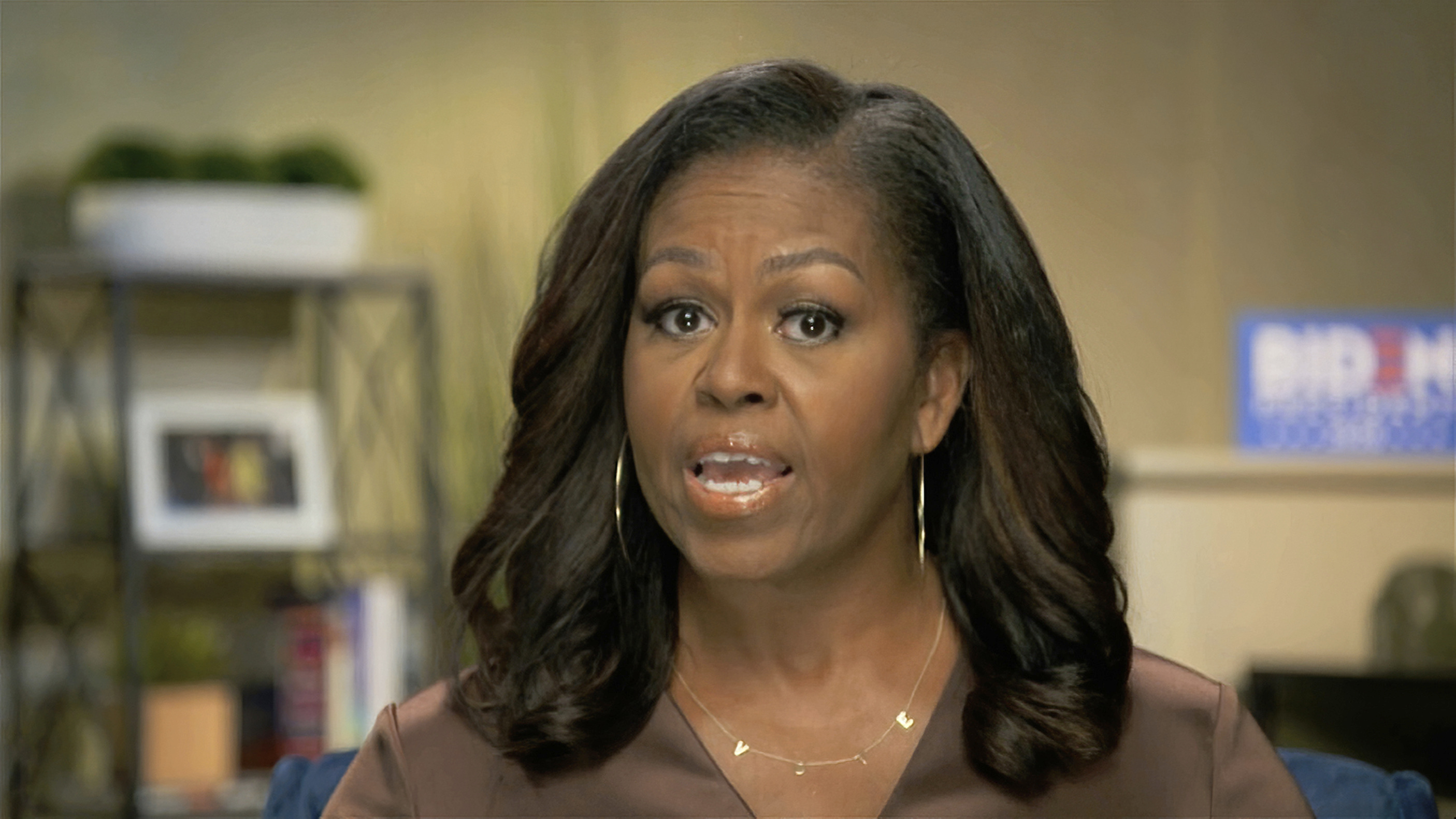 The gold-lettered VOTE necklace worn by Michelle Obama for her DNC speech was custom-commissioned by BYCHARI, a Black-owned, boutique jewelry business based on Los Angeles, a DNC source tells CNN.

The lettered necklace can be ordered via the company’s website. Depending on the size of the letters and length of the chain, similar necklaces by BYCHARI cost between $300-$400.

Denouncing the Trump administration, former first lady Michelle Obama said on Monday that America's children "watch in horror as children are torn from their families and thrown into cages."

Facts First: The Trump administration did impose a policy of routinely separating migrant children from their parents at the border; separation happened far less frequently under President Barack Obama. However, Michelle Obama didn't mention that "cages" were also used under her husband's administration to house migrant children; some of the facilities controversially used to detain children in cages under President Trump were actually built under Barack Obama.

Former first lady Michelle Obama continued her remarks at the Democratic National Convention Monday night by suggesting that her message wouldn't necessarily be accepted by everyone, but it is one of the utmost importance— and "if you think things cannot possibly get worse, trust me, they can."

"We live in a nation that is deeply divided, and I am a Black woman speaking at the Democratic Convention. But enough of you know me by now. You know that I tell you exactly what I’m feeling. You know I hate politics. But you also know that I care about this nation," Obama said.

"You know how much I care about all of our children. So if you take one thing from my words tonight, it is this: If you think things cannot possibly get worse, trust me, they can; and they will if we don’t make a change in this election. If we have any hope of ending this chaos, we have got to vote for Joe Biden like our lives depend on it," she continued.

New York Gov. Andrew Cuomo boasted Monday of his state's efforts to fight the coronavirus, contrasting his government's approach with how the federal government has handled the pandemic.

Cuomo said that "as they proved their way failed, we proved that our way succeeded." He added, "And for all the pain and all the tears, our way worked. And it was beautiful."

Facts First: New York does currently have low levels of coronavirus infection, hospitalization and death compared with other big US cities. However, it is highly debatable whether Cuomo's overall handling of the pandemic has been a success. He did not mention some important facts and statistics.

Though New York has dramatically flattened its coronavirus curve since its April peak, that initial peak was severe. As of Wednesday, New York still had had more than twice as many total coronavirus deaths as any other US state — more than 32,800, according to Johns Hopkins University data — and was second-highest, behind New Jersey, in deaths per 100,000 people, with 169.

While some of New York's crisis was undoubtedly caused by bad fortune — as an international travel hub, New York City got hit with the virus before some other major US cities — Cuomo's approach likely contributed not only to the current successes but also to the initial failures.

Cuomo was initially reluctant to order state residents to stay at home; he issued a stay-at-home order on March 20 (it went into effect on March 22) — four days after a group of California counties issued similar orders and a day after California's governor, Gavin Newsom, issued such an order for the state. California had fewer confirmed cases than New York at the time.

Cuomo's early communication about the virus has also been called into question. He said on March 19: "I'm as afraid of the fear and the panic as I am of the virus, and I think that the fear is more contagious than the virus right now. You take a place like New York City, we are at near panic levels, so what you say and how you communicate is very important. Should everybody stay home? Of course. Are we imprisoning people? No. Can you stay inside 24 hours a day? No."

Seeking to free up hospital beds, Cuomo's administration also issued a controversial March 25 directive prohibiting nursing homes from denying new or returning residents with the coronavirus. More than 6,400 New York nursing home residents have died from the virus. (The extent to which the March 25 order contributed to the death toll is not clear.)

"Over the past four years, a lot of people have asked me: When others are going so low, does going high still really work? My answer: Going high is the only thing that works, because when we go low, when we use those same tactics of degrading and dehumanizing others, we just become part of the ugly noise that's drowning out everything else,” Obama said.

“We degrade ourselves, we degrade the very causes for which we fight. But let's be clear: Going high does not mean putting on a smile and saying nice things when confronted by viciousness and cruelty,” Obama said.

Obama said, “Going high means taking the harder path. It means scraping and clawing our way to that mountaintop. Going high means standing fierce against hatred while remembering that we are one nation under God, and if we want to survive, we've got to find a way to live together and work together across our differences.”

“And going high means unlocking the shackles of lies mistrust with the only thing that can truly set us free: The cold hard truth," Obama said.

“So let me be as honest and clear as I possibly can. Donald Trump is the wrong president for our country. He has had more than enough time to prove that he can do the job, but he is clearly in over his head. He cannot meet this moment. He simply cannot be who we need him to be for us. It is what it is.”

Michelle Obama accused President Donald Trump of "a total and utter lack of empathy" in a blistering condemnation of his actions in office.

"Right now, kids in this country are seeing what happens when we stop requiring empathy of one another. They’re looking around wondering if we’ve been lying to them this whole time about who we are and what we truly value," the former first lady said.

She pointed to "shouting in grocery stores" over wearing masks, the idea that "winning is everything," emboldening white supremacists, immigrant children being torn from their families and pepper spray being used to disperse peaceful protesters.

"Sadly, this is the America that is on display for the next generation. A nation that’s underperforming not simply on matters of policy but on matters of character. And that’s not just disappointing; it’s downright infuriating, because I know the goodness and the grace that is out there in households and neighborhoods all across this nation," she said.

"And I know that regardless of our race, age, religion, or politics, when we close out the noise and the fear and truly open our hearts, we know that what’s going on in this country is just not right. This is not who we want to be," Obama added.

As Democrats criticized the Trump administration for its handling of the US Postal Service, Eva Longoria Bastón, the actress and activist who hosted Monday's event, said, "Social Security beneficiaries count on the post office to get their checks."

Facts First: Though some prominent conservatives have called her wrong, Longoria was right. While 99.1% of Social Security recipients now receive their money via direct deposit, that remaining 0.9% equals 549,818 people receiving checks, according to official data published by the Social Security Administration for this month.