Our live coverage of Tuesday's election has moved here.

More than a million voters have already cast their ballots as of this morning, according to Christopher Piper, commissioner for the Virginia Department of Elections.

There are more than 5.9 million voters registered for this election, Piper said in a briefing, and more than 1 million have already voted.
Of those, about 862,000 voted early and in person, while 306,000 voted absentee by mail. Nearly 20% have already cast their ballots, he said.

"The Virginia General Assembly and the governor have worked together to expand access to the ballot, with early voting no-excuse, and other initiatives that have made voting easier here in Virginia," he said.

Piper said it's been a "pretty quiet" Election Day so far, with very minor issues at some polling locations, including a delayed 10-minute start at a middle school in Henrico County due to a medical situation. There were also reports of some scanner machines being jammed in the county, and "election officials are following the proper protocols" while waiting for technicians.

A power outage was reported at a polling location in Chesterfield County, and Piper said crews are on the scene. In Loudoun County, government office phones were offline this morning but now are back up, he added.

He encouraged voters to get out and cast their ballots today.

Polls close at 7 p.m. ET, and then registrar offices across the commonwealth will begin tabulating results, he said. If voters are in line at 7 p.m. when polls close, he reassured them that they can stay in line and will not be turned away.

Results will become official on Nov. 15 when they are certified by the state board of elections.

Adams has largely shrugged off attacks from Republican nominee Curtis Sliwa, a founder of the volunteer neighborhood safety group known as the Guardian Angels and a media personality, who's tried to cast him as a career politician. They have disagreed over issues like the vaccine mandate for city workers, which Adams mostly supports and Sliwa does not.

Adams, a retired captain in the New York Police Department, often returns to the message that helped him win the June primary — that he is uniquely positioned to address the rise in crime in the city and lure back New Yorkers who left during the pandemic, as well as the tourists who are so critical to the city's economic success.

Adams won that primary by promising to step up policing throughout the city, but he also struck a careful balance: vowing to deal with police misconduct and highlighting his efforts to call out racism within the NYPD, as well as his testimony in the court case that ended the unlawful use of "stop and frisk" policies. (Adams says the tactic should be used, but under lawful guidelines.) He has argued that the current debate over policing has presented a false choice — a with-them or against-them mentality that he says undermines the community's need for police.

Adams built his primary victory in part on the strength of his base in the city's working-class outer boroughs, including places like the predominantly Black neighborhoods of Southeast Queens, rather than the most liberal enclaves of Manhattan and Brooklyn. But he has hustled since the primary to try to unify the city's voters behind him in the hopes of entering office with a strong mandate.

“We feel pretty darn good, I have to say,” Youngkin said. “I’ve just felt this great surge of momentum for the last six to eight weeks.”

Youngkin has run a strong race in a Democratic-trending state — which, if that translates into victory, would match Virginia's longstanding pattern of rewarding the party that lost the White House the year before. A Youngkin victory would be no surprise, though polls generally show a close race with Democratic opponent Terry McAuliffe.

Youngkin said the takeaway from his campaign is that local issues are top of mind for voters.

“These kitchen table issues of low taxes and the best schools and the best jobs and safe communities – this is what people are worried about,” he said.

After a brief press gaggle, with all but one voter nearby, Youngkin asked for a basketball and walked to the back of the school to shoot hoops. He sunk his first shot from the free throw line and missed a number of other shots from the paint before his staff told him he had to run. His campaign bus continues to idle in front of the school.

The political world eagerly awaits results from Tuesday's Virginia gubernatorial race, but they won't yield much new information about 2022 and beyond.

Republican candidate Glenn Youngkin has run a strong race in a Democratic-trending state — which, if that translates into victory, would match Virginia's longstanding pattern of rewarding the party that lost the White House the year before. A Youngkin victory would be no surprise, though polls generally show a close race with Democratic opponent Terry McAuliffe.

Republicans nationally are poised for gains in next year's midterm elections – reflecting the nation's longstanding pattern of rewarding the party that lost the White House two years before. So long as Americans remain uneasy about the pandemic, the economy, and President Biden's leadership, Democrats stand to lose control of Congress whether or not McAuliffe manages to keep the Virginia governor's mansion in his party's hands.

"If McAuliffe wins by one or loses by one, is the message going to be any different?" asked Larry Sabato, who directs the University of Virginia Center on Politics. "No – it's going to be a tough midterm."

If Terry McAuliffe wins, Democrats will take the victory as validation that a state that has trended blue over the last decade still stands behind President Biden's agenda and against Republicans, even if former President Trump is not on the ballot.

History is not on Democrats' side: Since the 1970s, the winner of Virginia's off-year gubernatorial election has nearly always come from the party in opposition to the White House. The only exception was in 2013, when McAuliffe won his first gubernatorial term a year after then-President Barack Obama won reelection.

But even if McAuliffe wins a tight race, the result could spell warning signs for Democrats in Washington, given Biden's 10-point victory there just last year and the fact that the party in power often loses seats in the subsequent midterms.

Democrats had hoped McAuliffe would be able to run on a successfully passed infrastructure package from the Biden administration, but continual delays on Capitol Hill and Democratic infighting made the prospect of a deal before Nov. 2 unlikely, something that McAuliffe has used to lambast Congress.

"I say: Do your job," he said earlier last month. "You got elected to Congress. We in the states are desperate for this infrastructure money. ... We need help out here in the states, and people elected you to do your job."

And while he has publicly argued the bill is more important for the people of Virginia than for his political fortunes, his aides and advisers have privately worried that dysfunction in Washington could spill into their race, especially in the vote-rich Northern Virginia suburbs.

For Glenn Youngkin, a win would reverberate far beyond Virginia — where a Republican has not won statewide in 12 years — and deliver the GOP a jolt of momentum heading into 2022. And while each campaign is different and Youngkin, who came into the race as largely a blank slate with unlimited money, is a unique figure, a possible win would validate his strategy of lauding Trump at times while also keeping him at arm's length.

"Regardless of whether or not he wins ... it looks like Youngkin is showing Republicans that they don't need to be wedded to Trump," said Doug Heye, a Republican consultant who previously served as the top spokesperson at the Republican National Committee. "Sure, they don't want to cross him and alienate his base. But, especially with Biden's low numbers and McAuliffe's vulnerabilities on things like education, Republicans can play on Democrats' field. That's the first step in putting Trump in the rearview mirror."

While there are some doubts among Republicans that the strategy could work in federal races, Heye says that because "all politics are national now," issues that were once hyper-local "will be talked about up and down the ballot."

The 2021 races are also the first time that voters have the opportunity to cast their ballots early without an excuse for having to do so after the Democratic-led state changed election laws. According to the Virginia Department of Elections, more than 734,000 Virginians have cast ballots already.

Conversations with McAuliffe and Youngkin supporters have shown a similarity in how each is approaching the race: Both are worried that wins by their opponents would turn Virginia into a vastly different kind of place. Democrats have told CNN repeatedly that a Youngkin win would turn Virginia into a Republican-dominated state like Georgia, Texas or Florida, while Republicans have openly worried that a McAuliffe win would turn the commonwealth into California.

If McAuliffe wins, "we are going to head down the path we are already going down with Biden," said Wanda Schweiger, a 61-year-old Youngkin supporter. "And it is a sinking ship."

Stacey Abrams, a former gubernatorial candidate in Georgia and a voting rights activist, made that case directly to voters over the weekend.

Minneapolis voters are heading to the polls today to vote on whether the city's police department should be replaced with a public safety department.

Passage of the measure, requiring 51% of those voting on the question to answer "Yes," would lead to the creation of a "Department of Public Safety." If the city continued to employ police officers, they would be organized under that department. It would also remove a requirement to employ a minimum number of officers and would split authority for the new department between the mayor and city council.

Some background: The measure — which was proposed by an advocacy group called Yes 4 Minneapolis — comes more than a year after former Minneapolis police officer Derek Chauvin killed George Floyd, a Black man, in May 2020.

Floyd's killing at the hands of a White police officer sparked national and global protests against police brutality, racism and social injustice.

Reporting from CNN's Maeve Reston and Emma Tucker contributed to this post.

Voters will decide Tuesday on key ballot measures related to issues including policing, election reform and some proposals authored in response to Covid-19 restrictions.

While there are typically fewer ballot questions in an off-election year, there are 24 statewide ballot measures for consideration in six states, according to the National Conference of State Legislatures.

Voters in some major cities, in addition to choosing their next mayor, will also have the opportunity to weigh in on an important issue that has been heavily debated in their communities.

Read about the measures below: 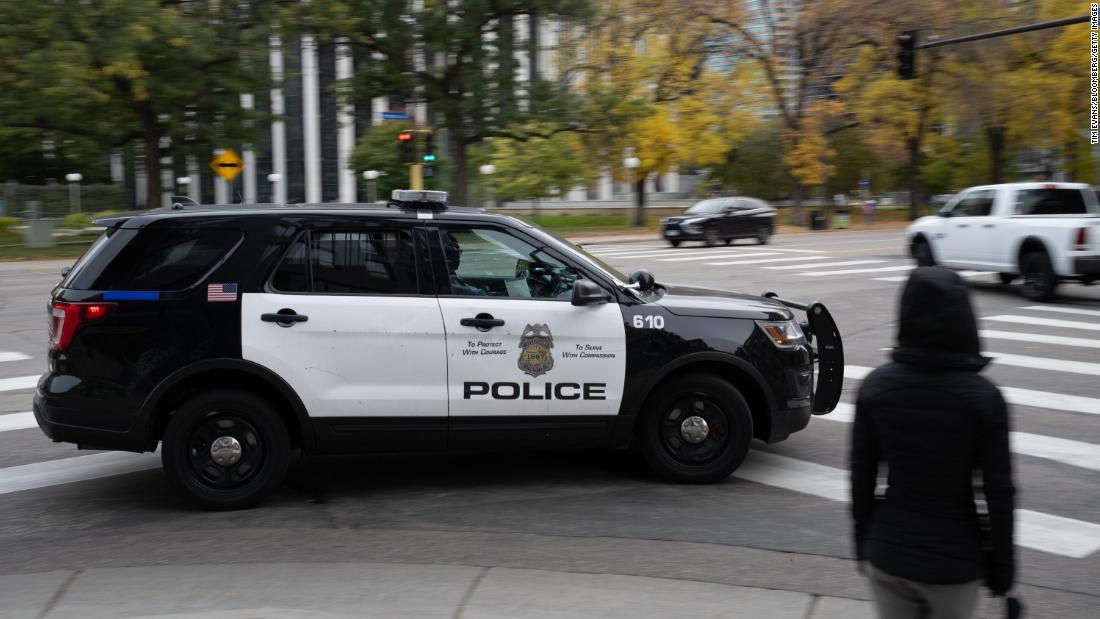