Judge Emmet Sullivan of the US District Court of the District of Columbia ordered the United States Postal Service to sweep all processing facilities by 3 p.m. ET in a number of states, including some critical battleground state.

The order mandates that USPS postal inspectors "or their designees" must start sweeping the processing facilities by 3:00 p.m. ET.

According to the order, this is,

"to ensure that no ballots have been held up and that any identified ballots are immediately sent out for delivery."

The sweeps must be conducted in the following USPS districts:

Seven battleground states are conducting sweeps and do not allow ballots to arrive after Election Day. They include: Michigan, Wisconsin, Georgia, Florida, New Hampshire, Arizona, and Maine.

President Trump just walked into the bullpen of his campaign headquarters in Virginia to sustained cheers from campaign staff.

Trump said his message to America was that "everybody should come together, and success brings us together."

CNN reported earlier, that Trump huddled with his top campaign staffers in a conference room at the headquarters, a source tells CNN, including Bill Stepien, Justin Clark and several others. They met for about 20 minutes.

The North Carolina State Board of Elections says the board will meet at 1 p.m. ET this afternoon to consider extending hours at four voting locations.

The locations are: one polling place in Guilford County, one polling location in Cabarrus County, and two locations in Sampson County.

An extension of hours at even one of these locations would delay the reporting of results statewide.

Karen Brinson Bell, executive director of the North Carolina State Board of Elections, said one of the reasons the sites opened late was because of poll workers arriving late.

CNN reported earlier that slight opening delays had been reported in Sampson and Guilford counties.

There was a printer issue at Marks First Missionary Baptist Church in Concord, North Carolina, which is in Cabarrus County. Kasia Faryna Thompson, Cabarrus County Director of Communications, estimates the issue delayed the poll from opening by about 15-20 minutes.

The State Board may extend the closing time by an equal number of minutes.

Poll watchers, as the name implies, are expected to watch or observe what happens at polling places. Their primary job: Help ensure that their party has a fair shot at winning. Both parties do it.

But poll watchers can't interfere in any way with the actual voting process.

They can closely monitor the administration of the election to ensure that votes are counted accurately. And in some states, poll watchers can also challenge an individual voter's right to cast a ballot. Partisan poll watchers, however, must conduct those challenges through official poll workers and cannot stop or otherwise try to interfere with someone trying to vote.

Even if a poll watcher challenges an individual voter – for instance, by arguing that the person's name doesn't appear on the local voting rolls – states often allow that person to cast a "provisional" ballot to be counted later, once his or her right to vote has been verified.

Poll watchers can also help turn out the vote by counting the voters who have cast ballots and helping their respective candidates track which potential supporters haven't yet voted. That helps campaigns mount last-minute Election Day efforts to get those voters to cast their ballots before polls close.

Luzerne County in Northeastern Pennsylvania, which voted for Barack Obama in 2012 but went for President Trump in 2016, has begun processing approximately 52,000 mail-in ballots and expects that number to grow to nearly 60,000 by the time polls close at 8 p.m. ET, according to release from County Manager David Pedri.

He said volunteers were processing approximately 2,000 ballots an hour.

If that pace continues, workers will have processed a little more than one third of the anticipated number of mail-in ballots by 8 p.m. local time.

Pedri said the county was “experiencing great voter turnout at almost every polling place across the County.”

Pedri said there were “a few reported issues” at the county’s 129 polling places this morning, most of which were technical and resolved once diagnosed.

He said voters should anticipate waiting in a line and noted that as long as they were in line by 8 p.m. local time they would be allowed to vote.

“The early numbers that will come back will be those early votes, those would be the absentee. One would expect that Biden at that point would be ahead and then the rest of the night, frankly, is the President trying to catch Biden. And you know, he either will or he won't. I think he will. I think it's going to be a very, very close race. I think the President squeaks it out,” DeWine said.

The governor said he thinks Trump will perform well in rural areas of the state.

“I think he could exceed even the votes he got the last time,” DeWine said. “…I think the intensity is there. The ground game it seems to me, from what I can observe for the Trump team, you know, has been a lot better than the ground game for the Biden team.”

More than 102 million Americans have voted nationwide before the polls opened on Election Day, according to a survey of election officials by CNN, Edison Research, and Catalist.

Pre-Election Day voting has skyrocketed nationwide amid the ongoing coronavirus pandemic. At least seven states, including Texas, Hawaii, Nevada, Washington, Arizona, Montana and Oregon, have surpassed their total turnout from the 2016 general election in recent days.

Here's a breakdown of early voting by state so far: 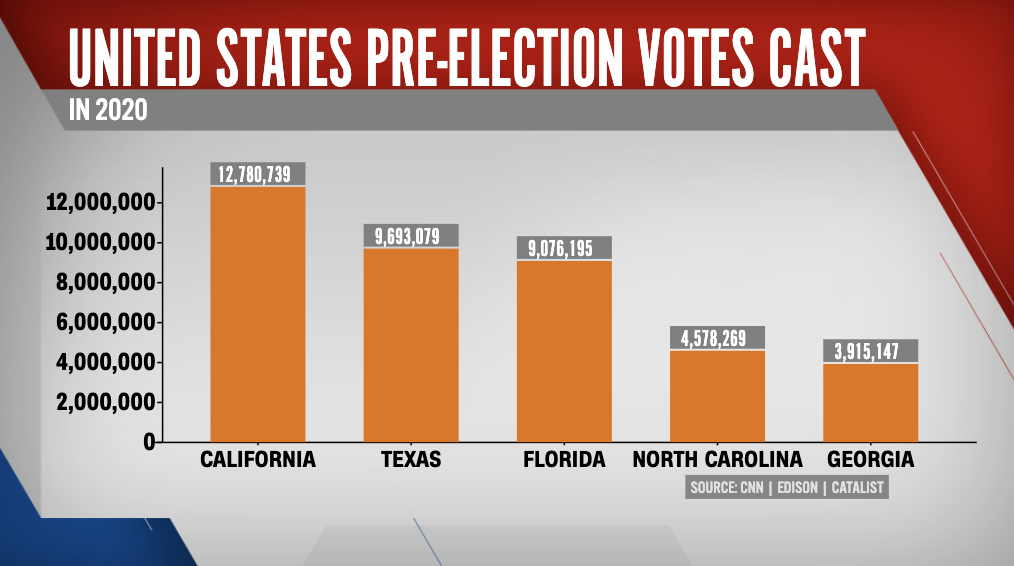 The biggest county in Iowa, which includes Des Moines, has finished counting all absentee ballots received through Monday, according to a tweet from the Polk County Auditor Jamie Fitzgerald.

The results from those ballots will be posted shortly after polls close at 10 p.m. ET (9 p.m. CT.)

Polk County went for Hillary Clinton by 11 points in 2016.

The county has more than 300,000 registered voters and more than 136,731 had already voted or sent in an absentee ballot through Saturday.

Iowans still have time to return their absentee ballots. They will be counted as long as they are postmarked by Nov. 2 and arrive by Nov. 9.

Democratic presidential candidate Joe Biden started his day at his home in Wilmington, Delaware. He attended mass at his Catholic church and spent a brief visit to his son Beau Biden's grave site, also visiting the grave site of his late wife and baby daughter.

From there, Biden traveled to his old hometown Scranton, Pennsylvania. He stopped by his boyhood home, writing on the wall: "From this house to the White House with the Grace of God, Joe Biden November 3rd, 2020."

Biden has just landed in Philadelphia, where he's making a few stops trying to get out the vote. Then he's going to return to Wilmington. He'll be watching the returns from his home and then move to an election center.

President Trump left the White House a short time ago and arrived at his campaign headquarters in Arlington, Virginia, according to the press pool traveling with the President.

"The motorcade rolled out of the White House down 17th Street and took I-66 across the river to Arlington, taking the exit for Rosslyn. We passed a large group of Trump supporters as we rolled through the streets. They appear to be waiting outside HQ."

Trump and Vice President Mike Pence are expected to spend Election Night at the White House.