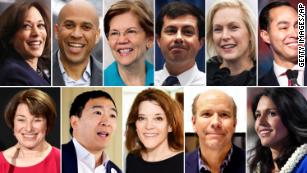 Democrats on the campaign trail: At least 10 declared and potential candidates made appearances across the country on Saturday.

The big topics of the day: Most of the candidates campaigning today weighed in on the President's declaration of a national emergency as well as gun control in light of Friday's mass shooting in Illinois and the marking Thursday of one year since the deadly shooting in Parkland, Florida.

Catch-up: CNN's Chris Cillizza and Harry Enten released their latest rankings for the 2020 Democratic nomination on Valentine's Day because they love their work.

Former Vice President Joe Biden voiced strong support for NATO at the outset of his speech to the Munich Security Conference.

“I strongly support NATO. I believe it is the single most significant military alliance in the history of the world. And I think it's been the basis upon which we've been able to keep peace and stability for the past 70 years And it is the heart of our collective security. It is the basis upon which the US is able to exercise its responsibilities in other parts of the world as well," he said to the annual gathering of political leaders and security experts in Munich, Germany.

President Donald Trump has publicly criticized NATO allies over defense spending and, according to the New York Times, privately raised withdrawing the US from the alliance multiple times.

In Munich, Biden also saluted his close friend, the late Sen. John McCain, who headed the US delegation to the conference for many years. Biden recognized Cindy McCain, who was in the audience. He also talked about the importance of the European Union.

Biden's speech to the Munich Security Conference gives him an opportunity to showcase his foreign policy acumen as he weighs entering a Democratic presidential primary field that is currently light on national security credentials.