US President Donald Trump addressed his trade talks with China at the press conference today, saying trade negotiations were continuing and that the US would not add additional tariffs.

"We won't be adding an additional tremendous amount of $350 billion dollars left which could be taxed or could be tariffed. We're not doing that, we are going to work with China on where we left off to see if we can make a deal. China is going to be  consulting with us and spending money even during the negotiations will, to our great farmers in the midwest and the great patriots -- because that's what they are. China is going to be buying a tremendous amount of food and agricultural products and they're going to start their very soon and almost immediately," Trump said.

"Basically we said today that we were going to continue with negotiations, which I ended a while back. We agreed that I would not be putting tariffs on the $325 billion that I would have the ability to put on if I wanted."

US President Donald Trump is moving between criticizing the US trade relationship with other countries and praising the current state of the economy.

The US leader said that he'd had meetings with many leaders, as well as some trade negotiations.

"We spent a lot of time with a lot of countries. Japan, we're negotiating with them because they send us millions of cars and we send them wheat," he said.

But Trump said that the US economy was booming, claiming that "a lot of activity" was coming back to the United States.

"We're the hottest show in town ... One thing that virtually every leader I deal with said was 'congratulations'," he said.

"We have the lowest unemployment numbers, best numbers." 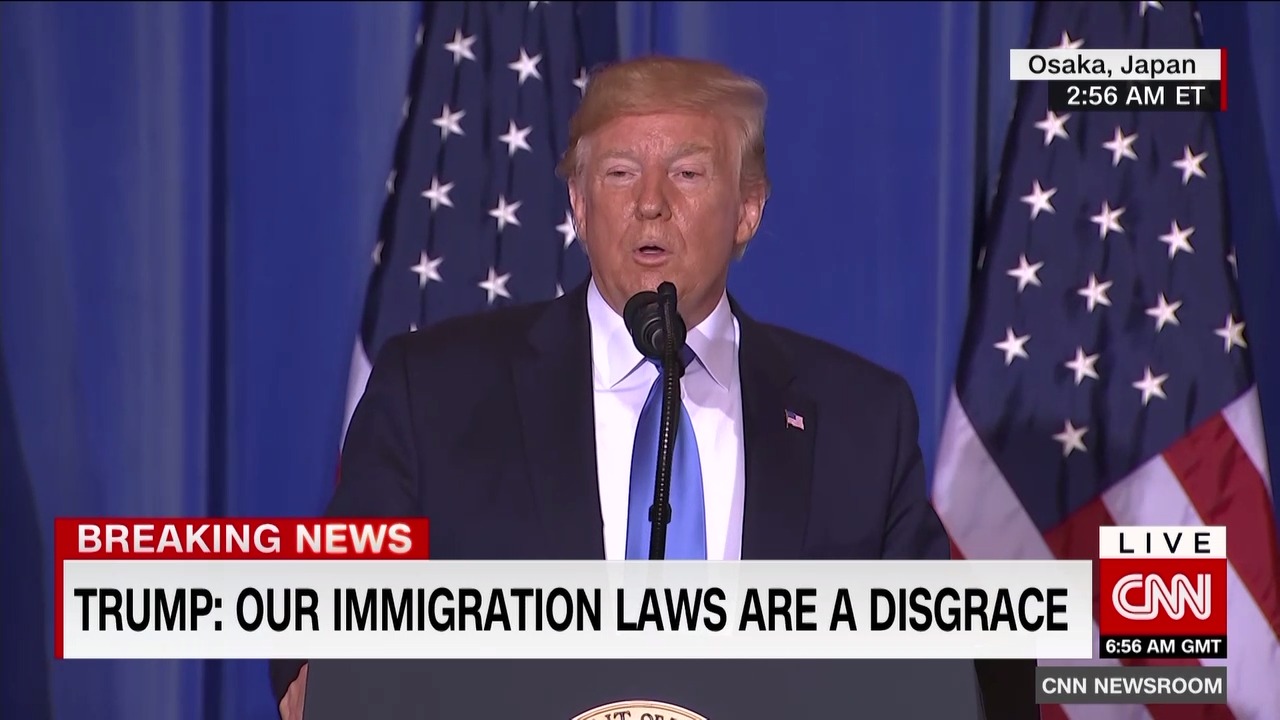 Mexico has been doing "an incredible job" with border security, US President Donald Trump said at a press conference in Osaka, where he slammed the Democratic presidential candidates for being weak on immigration.

"They have 6000 troops on their southern border like Guatemala, very hard to come in now. It was somewhat of a surprise, 16,000 troops at our southern border. Their immigration laws are very strong, ours are a disaster, ours are a disgrace to a country. We have loopholes and asylum that  -- we could fix the asylum really quickly, we could get rid of and fix the loopholes, we get rid of loopholes and have absolutely no problem at the border, but if you watch the debates -- if you call them debates, whatever they were -- I think they want open borders," Trump said.

US President Donald Trump said that he had a "great meeting" with Chinese leader Xi Jinping in Osaka earlier today.

"We've known each other for as long as I'm president," Trump said, praising his relationship with the Chinese leader.

Trump said that the two sides had agreed to leave tariffs unchanged for now. "We won't be lifting tariffs on China, for the time being," Trump said.

There are no further details yet on what other agreements were made but Trump hinted that there would be increased purchases of US goods as part of the deal.

"We're going to give them lists of things that we'd like them to buy," he said. 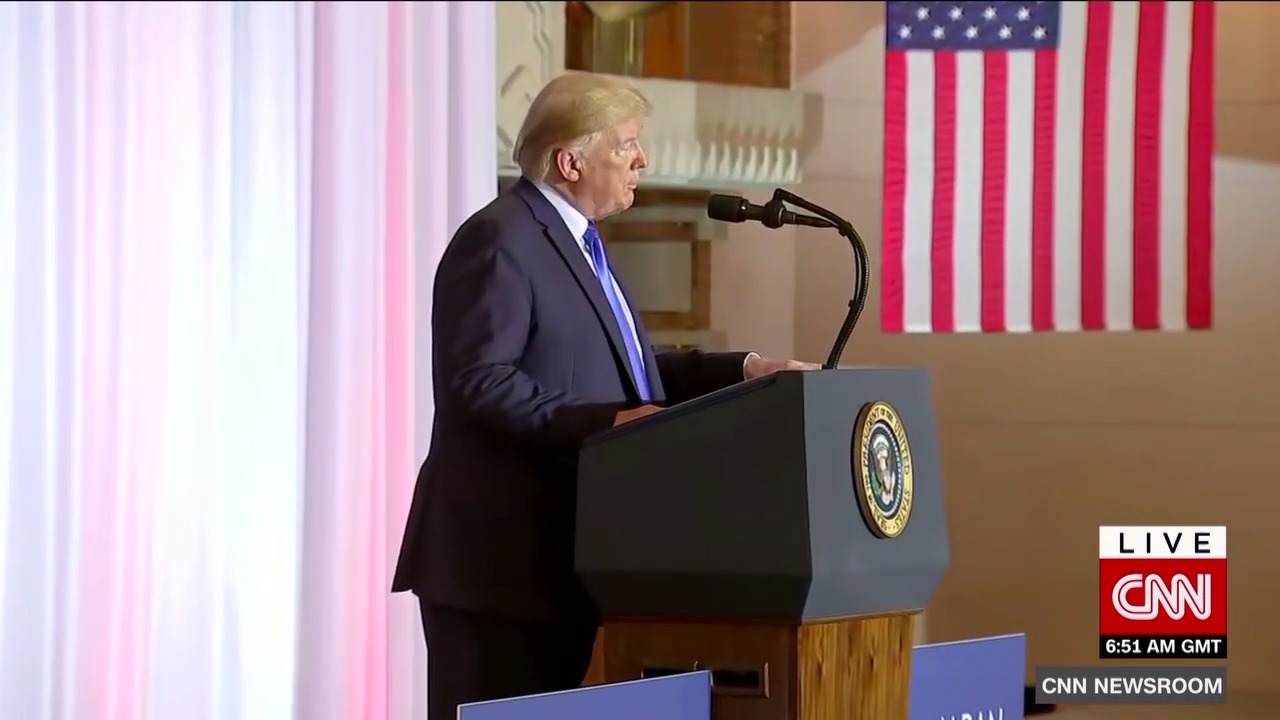 US President Donald Trump told reporters at his G20 press conference that he was hopeful of meeting with North Korea's Kim Jong Un during his forthcoming trip to the DMZ -- the demilitarized zone that separates the two Koreas.

After Trump leaves Osaka, he'll be heading to South Korea to meet with President Moon Jae-in.

This morning, the US leader tweeted an invitation to Kim that he would like to meet him and "shake hands" at the DMZ during his visit.

US Presidential Donald Trump has arrived on stage to begin his closing press conference in Osaka, Japan, capping off his visit. 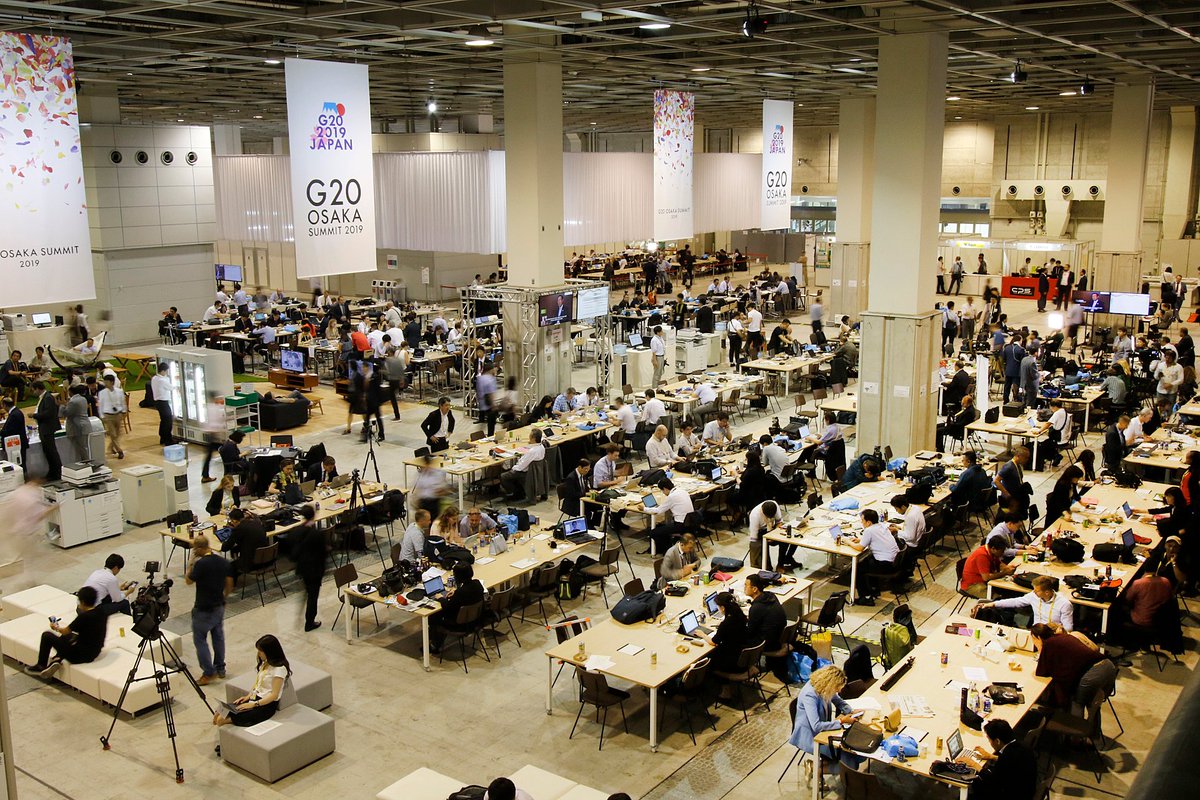 Journalists from across the world are gathered at the International Media Center in the Osaka G20 venue.

A photo tweeted by the official G20 Japan account shows a conference hall packed with journalists and members of the media, with outlets setting up shop on different tables.

The photo captures the frenetic energy that has defined this year's G20 summit. Journalists are drinking canned coffee, answering phones, hunched over laptops -- one has even slumped over on his table for a bit of shuteye.

Writing for CNN, Myron Brilliant, the executive vice president and head of International Affairs at the US Chamber of Commerce, says the ideal agreement between Xi and Trump would do several things:

Such a deal would lead to freer and fairer trade, support more innovation in both countries, and provide a stronger foundation to address nettlesome issues that cannot be tackled within a trade negotiation, says Brilliant.

Prolonging the trade war would not only deprive US businesses of access to the second-largest economy, but it would also permanently alter supply chains, thereby raising costs and destroying jobs at countless US firms, he adds.

"US President Donald Trump said he harbors NO hostility towards China and hopes for better relations between the two countries," the Chinese news service said.

Chinese state media has been prominently playing up that the two sides agreed to continue trade talks "on the basis of equal footing and mutual respect."

This has been a long running demand of the Chinese government, who feel that they're being blamed unfairly for trade tensions.

In May, after talks broke down, Chinese Vice Premier Liu He said any agreement had to be "equal and mutually beneficial" in an interview with Xinhua.