US President Donald Trump defended his stance on climate change and the withdrawal from the Paris Climate Accord at the press conference in Osaka.

When asked about climate change, Trump replied, "We have the best numbers we've ever had recently, and I'm not looking to put our companies out of business... I'm not looking to create a standard that is so high that we're going to lose 20 to 25% of our production."

"We have the cleanest air we've ever had, but I'm not willing to sacrifice the tremendous power of what we've built up over a long period of time and what I've enhanced and revived.
It doesn't always work with a windmill. When the wind goes off, the plant isn't working. It doesn't always work with solar because solar's just not strong enough, and a lot of them want to go to wind, which has caused a lot of problems."

US President Donald Trump said that he hadn't taken Huawei off a list of foreign firms deemed to undermine US national security.

But he reiterated that he'd allow Huawei to once again buy products from US companies.

It looks to be the second time that Trump has eased pressure on a Chinese technology company after talking to Xi.

In July 2018, Trump lifted restrictions on Chinese technology company ZTE which were restricting it from buying US parts, severely damaging their business.

Trump said at the G20 press conference that he had removed the restrictions as a "personal favor" to Chinese leader Xi Jinping.

"President Xi called me and he asked me for a personal favor, he's a leader of a major country and it was very important for him. It has 85,000 employees and they were almost out of business," he said.

US President Donald Trump lamented the Supreme Court's decision to block the addition of a citizenship question on the forthcoming US census.

He called the decision "very unfortunate" and said, as he tweeted earlier this week, that his administration is "looking" at legal options to stop the census.

He said the price of the census was "shocking."

"Billions of dollars. They go knock on doors, every house," Trump complained, adding: ”They're not allowed to ask whether somebody's a citizen of the US? How horrible and ridiculous is that?"

The addition of the question could impact the balance of power in states and the House of Representatives, which are based on total population. Adding the question, critics say, could result in minorities being undercounted. Writing for a 5-4 majority, Chief Justice John Roberts concluded that there was sufficient reason for concern about why the Commerce Department wanted to add the question.

Trump shot back Saturday when pressed on whether his administration was playing politics with the citizenship question.

US President Donald Trump said he's hoping to give a "quick hello" to Kim Jong Un tomorrow at the DMZ, but insisted it would not be a bad sign if he doesn't show up.

"No, of course I thought of that," Trump said when asked if it should be interpreted as a bad sign if Kim failed to meet him, noting that he expects critics to say "Oh, he was stood up" should that happen.

"It's very hard," he said of the US-North Korea situation, noting that Kim "follows my Twitter."

Asked if he knew that to be a fact, Trump said his team "got a call very quickly" after his tweet, adding, "A lot of people follow it."

As for what he would expect for a potential meeting, Trump said, "We're not talking about extended -- just a quick hello.” 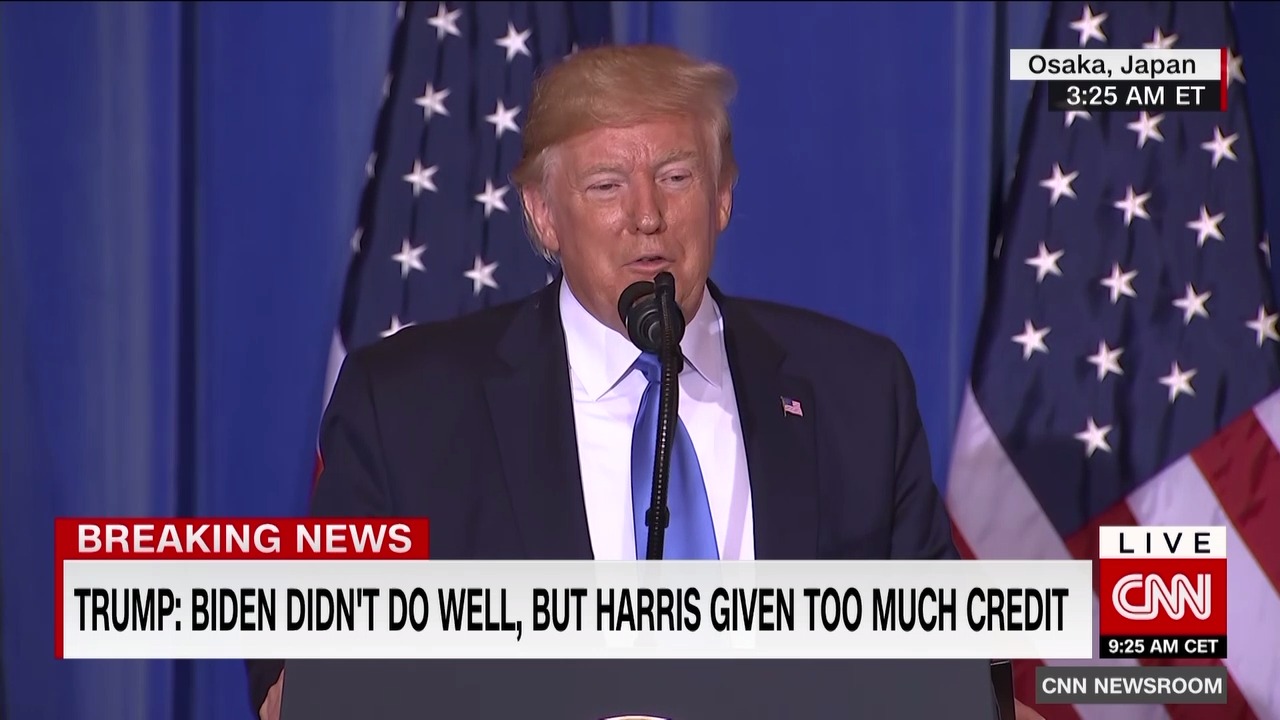 President Trump says a squabble between two of his potential Democratic rivals was given too much attention.

Speaking at a news conference in Japan, Trump said Sen. Kamala Harris was overly praised for her rebuke of former Vice President Joe Biden for his opposition to federal mandated school bussing.

Asked if he viewed Harris as a tough challenger, Trump said it was too early to tell. 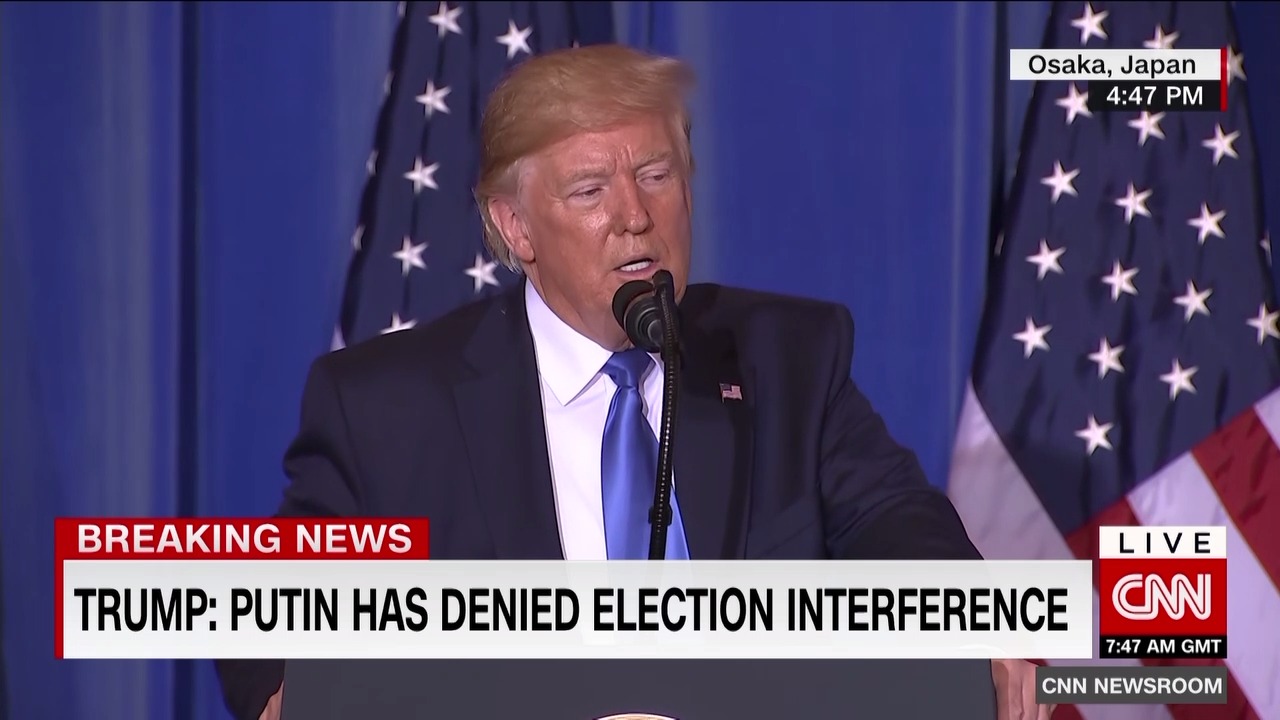 US President Donald Trump was asked to clarify his sentiments to Russian President Vladimir Putin when he appeared to make light of Russian meddling in the 2016 presidential election.

"You have to take a look at the word. I did say it," Trump said during a press conference in Osaka.

On Friday, Trump lightheartedly told Putin, "Don't meddle in the election" when asked by a reporter if the topic would come up during their bilateral meeting. The offhand remark, perhaps an attempt at levity, drew swift criticism.

Trump said he had a "tremendous discussion" with the Russian leader, and suggested it came up again later in their meeting.

"He denies it totally, by the way. How many times can you get somebody to deny something? But he has in the past, he's denied it also publicly," Trump said.

He added that they discussed other topics as well, including nuclear purchases and other arms control. 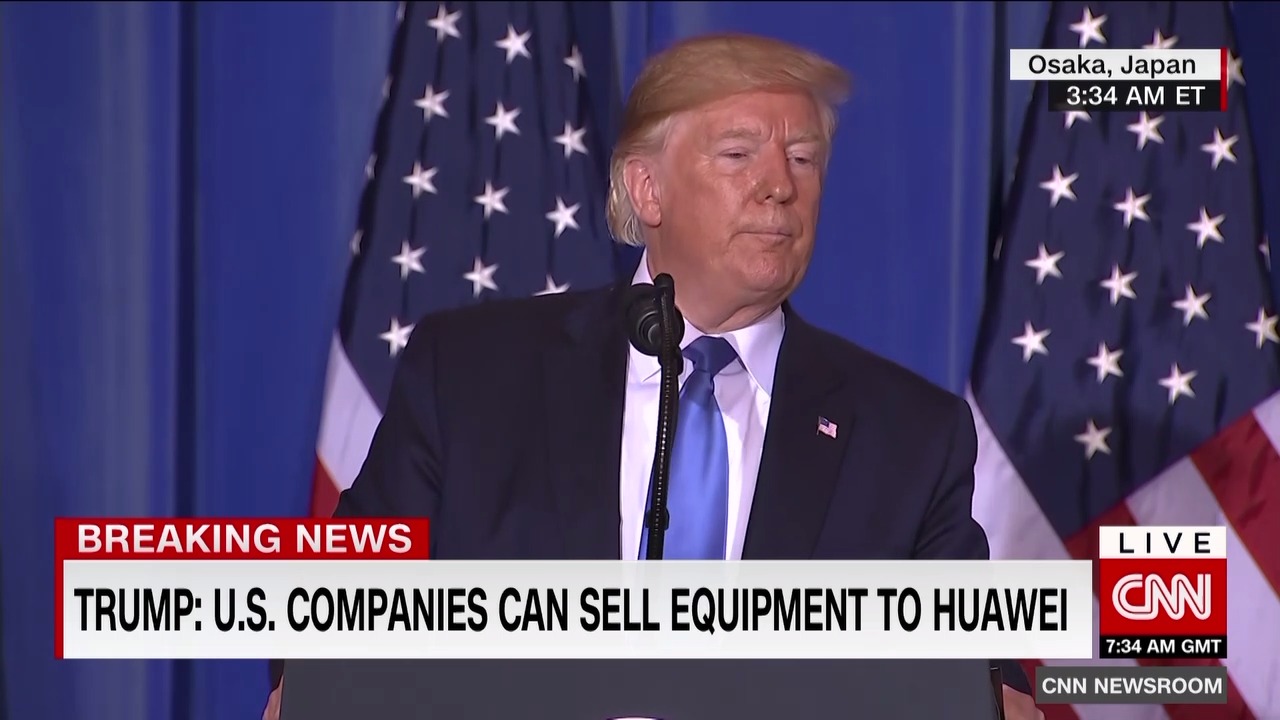 US President Donald Trump said Friday he would save the issue of Huawei for the end of US-China trade talks.

“We mentioned Huawei,” Trump said of his talks with President Xi Jinping of China earlier Saturday. “We’ll have to save that for the very end.”

He said he “agreed easily” in his meeting with Xi to continue allowing US companies to do business with the telecom giant.

The announcement appears to contradict previous assessments by US government officials that Huawei poses a spying risk to Western infrastructure networks.

Trump called the matter “very complex” and “highly scientific,” but said the matter of Meng Wanzhou, the Huawei executive who was arrested in Canada, didn’t come up.

Speaking at a press conference in Osaka, US President Donald Trump said that if his border wall had been built the lives of migrants could be saved.

"The father and the beautiful daughter who drowned ... if they thought it was hard to get in, they wouldn't be coming up... Lives would be saved," Trump said.

Trump was referring to the viral picture of a father and his young daughter who drowned in the Rio Grande trying to get to the United States.

"You have millions of people on line for years to get into a country. They take tests, they study ... and these people have worked hard, they've been on line for seven, eight, nine years, then someone walks in. Honestly it's very unfair," he said. 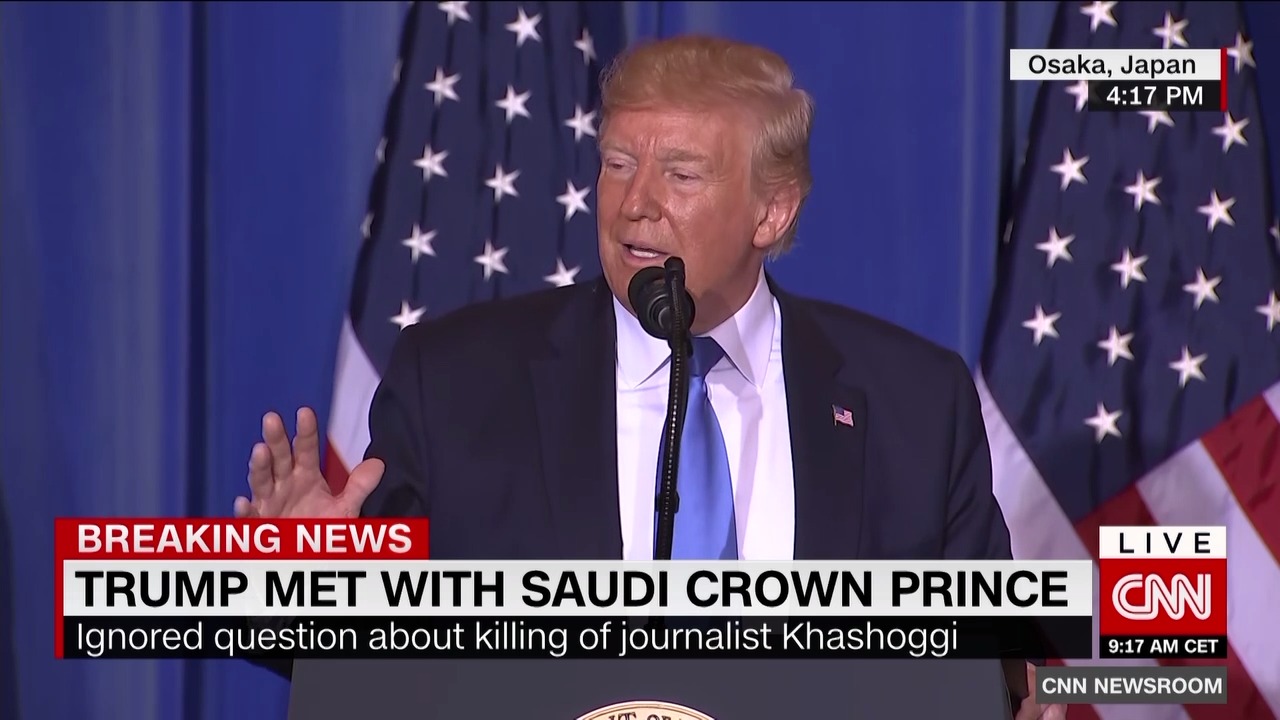 At an ongoing press conference in Osaka, US President Donald Trump criticized Saudi Arabia's persecution and detention of citizens, but deflected a question about the alleged murder of journalist Jamal Khashoggi.

CNN's Jim Acosta asked: "Do you agree that it is despicable for a government to kill a journalist?"
Trump responded: "Yes I do. I think it's horrible and if you look into Saudi Arabia and see what's happening, 13 people or so have been prosecuted... And I've let everybody know that I'm very unhappy about that whole event.
At the same time I will also say -- nobody so far has directly pointed a finger at the future king of Saudi Arabia. I will say I spoke to his father at great length. They've been a terrific ally, they're creating millions of jobs in this country. They are ordering equipment, not only military equipment, but $400 billion worth and even more than that over a period of time worth of different things.

With that being said, I'm extremely angry and unhappy about a thing like that taking place. But as of this moment, more than 13 people are being prosecuted and I hear the numbers are going to be going up."

An earlier version of this post incorrectly identified the reporter who questioned Trump. This has been corrected.