President Trump would not confirm if the US and France have reached an agreement on sanctions on French wines — but he would confirm that his wife loves the drink.

A reporter noted that Melania Trump was seen tasting French wine during the G7 summit.

"So can you perhaps give up on your threat to put sanctions on French wine?" the reporter asked. "Could you confirm that there has been an agreement between you and France on taxing digital firms?"

Asked if he was ready to make a deal on trade with China, President Trump said, "Only if it's a fair deal and a good deal for the United States. Otherwise, I will not make a deal."

He added that if they don't make a deal with the US it will be "very bad for China."

"Kim Jong Un, who I've gotten to know extremely well — the first lady has gotten to know Kim Jong Un and I think she would agree with me — he is a man with a country that has tremendous potential," Trump said.

"I think that Kim Jong Un sees that he would be the leader and I think he sees the tremendous potential that it’s got. 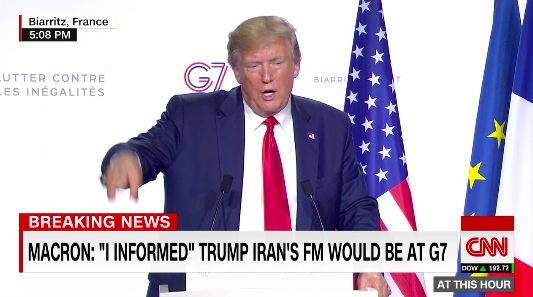 "If the circumstances were correct or right I would certainly agree to that," Trump said at the G7 summit in France. "In the meantime they have to be good players."

Earlier, Macron said he was working to arrange a meeting between Trump and Hassan Rouhani in the next few weeks as a precursor to a new nuclear agreement.

Trump did not respond directly to Macron's effort. But he said any new deal would need to encompass a longer period of time and include ballistic missile testing.

"We’re looking for no nuclear weapons, no ballistic missiles, and a longer period of time," Trump said.

"I really believe that Iran can be a great nation," Trump said. "I’d like to see that happen."

But he said if Iran continued bad behavior, it would be met with "violent force." 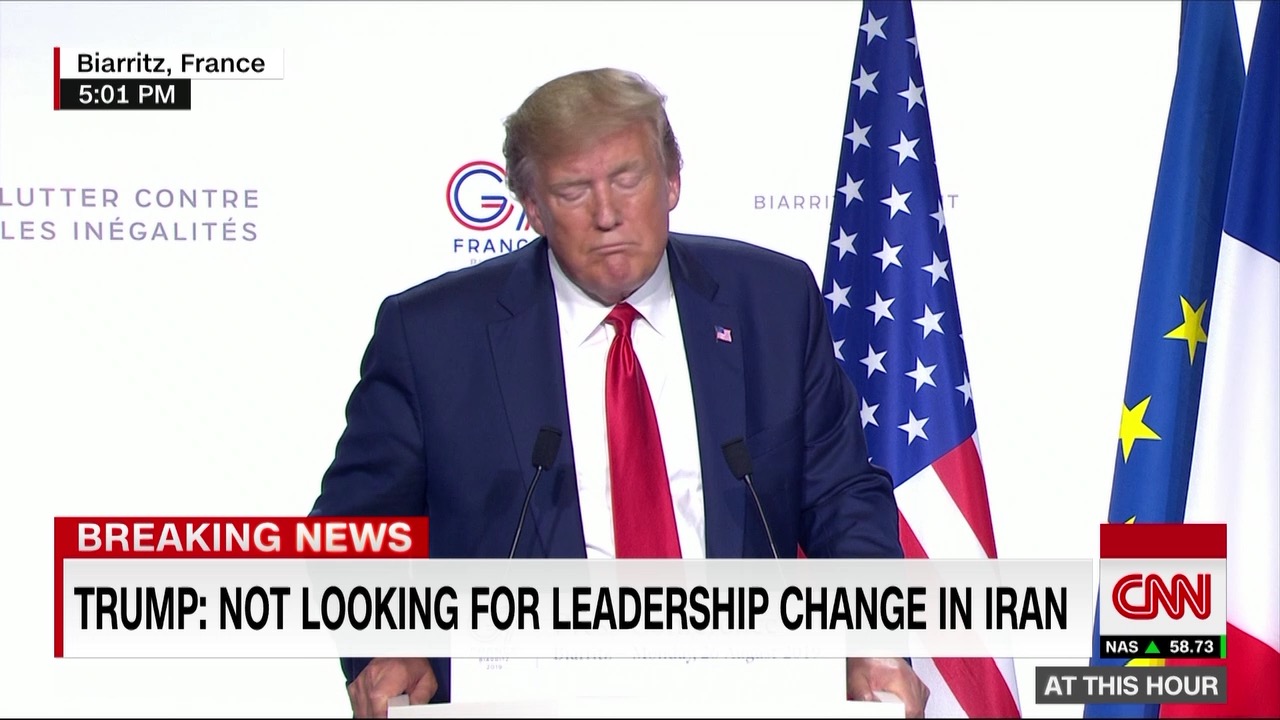 President Trump said Iran is "not the same country that it was two and a half years ago" when he came into office.

He said the US would like to see Iran without nuclear weapons — but he's not looking for a leadership shakeup within the nation.

Trump said he believes Iran can be a "great nation."

“I would like to see that happen," he added. "But they can’t have nuclear weapons.” 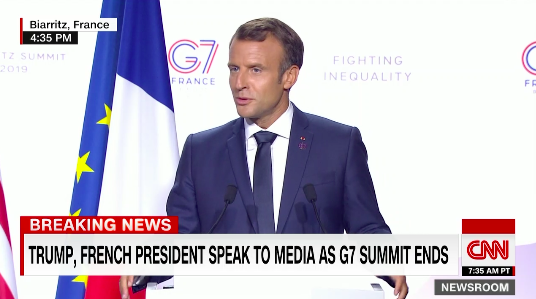 French President Macron said that world leaders discussed brokering a "new nuclear agreement" with Iran at the G7. Macron is calling for the leaders of the US and Iran to meet in the coming weeks to discuss the issue.

"At a given point in time there will have to be a meeting between the American and Iranian president and I would wish that in the coming weeks such a meeting take place," Macron said.

"I'm ready to have a meeting to make a deal," Macron added. "I want this meeting to happen."

"Do you believe that China is sincere about what it said this morning?" a reporter asked the President at a news conference.

Earlier today, Trump said he'd received word from China that its negotiators are ready to return to trade talks, even after his aides spent Sunday insisting Trump wants higher tariffs on Chinese products. 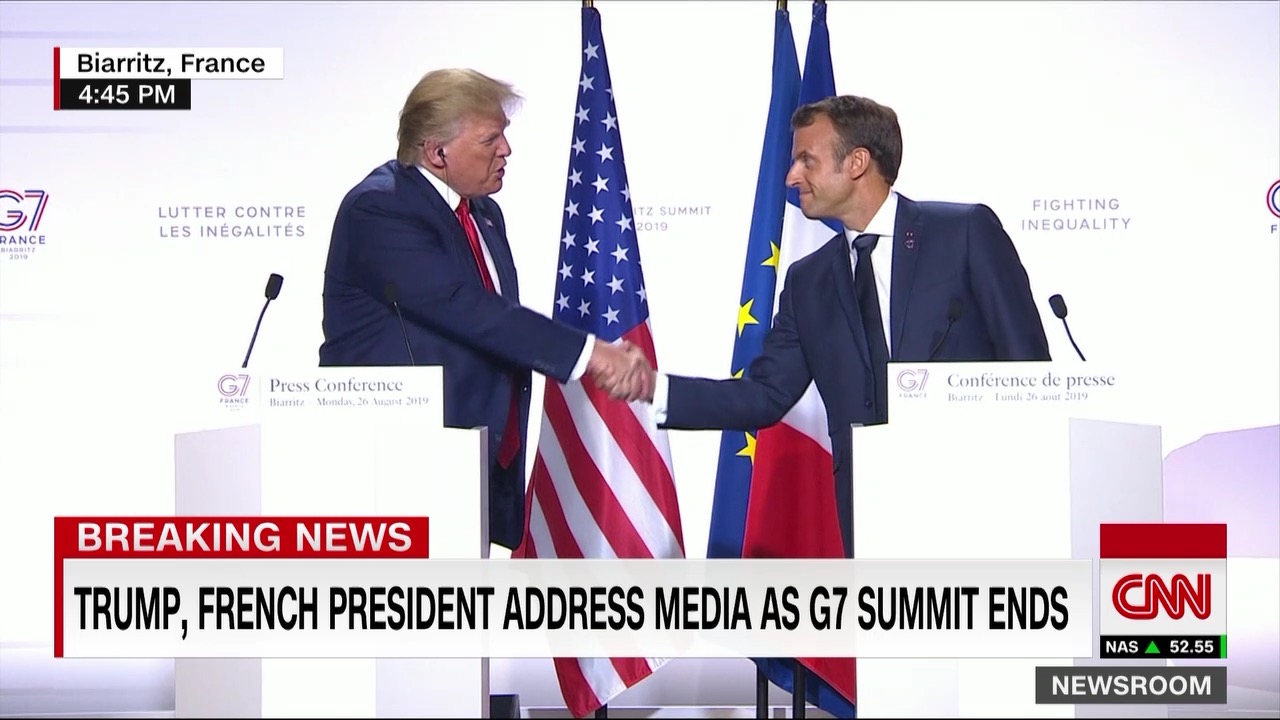 French President Emmanuel Macron said he hopes the US and China reach a trade deal quickly because "uncertainty" is bad for the global economy.

"Our deep wish is for an agreement to be found between the United States and China concerning trade because I think that would be something positive for everyone," he said when asked if he was concerned about the trade war between the US and China.

Some context: Earlier today, Trump said he'd received word from China that its negotiators are ready to return to trade talks, even after his aides spent Sunday insisting Trump wants higher tariffs on Chinese products.

French President Emmanuel Macron said both he Trump agree that Iran “must never have nuclear arms."

Speaking next to President Trump, Macron added that Iran "must never be allowed to disturb the stability of the region."

The French President went to say that a lot of pressure has been put on Iran. He welcomed both the visit by Iran Foreign Minister Javad Zarif as well as the words by Iranian President Hassan Rouhani as a positive step in what he still described as a “fragile” environment.