Partial shutdown likely to continue until after Christmas

The partial government shutdown will continue into a second day on Sunday and will now likely continue until at least Thursday, as Congressional lawmakers and President Donald Trump failed to come up with an agreement to fund the parts of the government on Saturday after funding for roughly a quarter of the federal government ran out on Friday night at midnight.

Here's some of what happened on Saturday:

What's Next? The Senate will return on Monday for a pro forma Senate session, but the next actual session is scheduled for Thursday afternoon. In the unlikely event a deal is reached by Monday, the pro forma session could be used to pass it by unanimous consent or voice vote, something that would only require one senator to be in attendance. House Republicans have also been told there are no votes scheduled until at least Thursday.

House Majority Whip Steve Scalise in a news release told members Saturday afternoon that there were no votes expected before December 27.

In the unlikely event a deal is reached earlier, House members could return for a vote.

Due to the shutdown, President Trump will remain in Washington, D.C. and the First Lady will return from Florida so they can spend Christmas together,” White House press secretary Sarah Sanders said in a statement on Saturday.

Melania departed for Mar-a-Lago Friday. She planned to spend the holiday with her son and the President at their Florida home, her spokeswoman Stephanie Grisham said.

"It has long been the family's tradition to spend their Christmas holiday at Mar-a-Lago," Grisham said.

The President had planned to spend 16 days at his Palm Beach resort, which he's styled as the "winter White House."

Following the meeting with Vice President Mike Pence and Senate Minority Leader Chuck Schumer, a Schumer spokesman said "The Vice President came in for a discussion and made an offer. Unfortunately, we’re still very far apart."

The Senate has adjourned for the day. There will be a pro forma session Monday -- but the next actual session is scheduled for Thursday afternoon, so there is little expectation of passing a deal soon.

Vice President Mike Pence has just arrived at the Capitol where he will soon meet with Senate Minority Leader Chuck Schumer, a Schumer aide said.

The meeting is at the White House’s request.

Pence will give a readout of the White House lunch and Schumer will reiterate that border wall money can’t pass the Senate, the aide said. 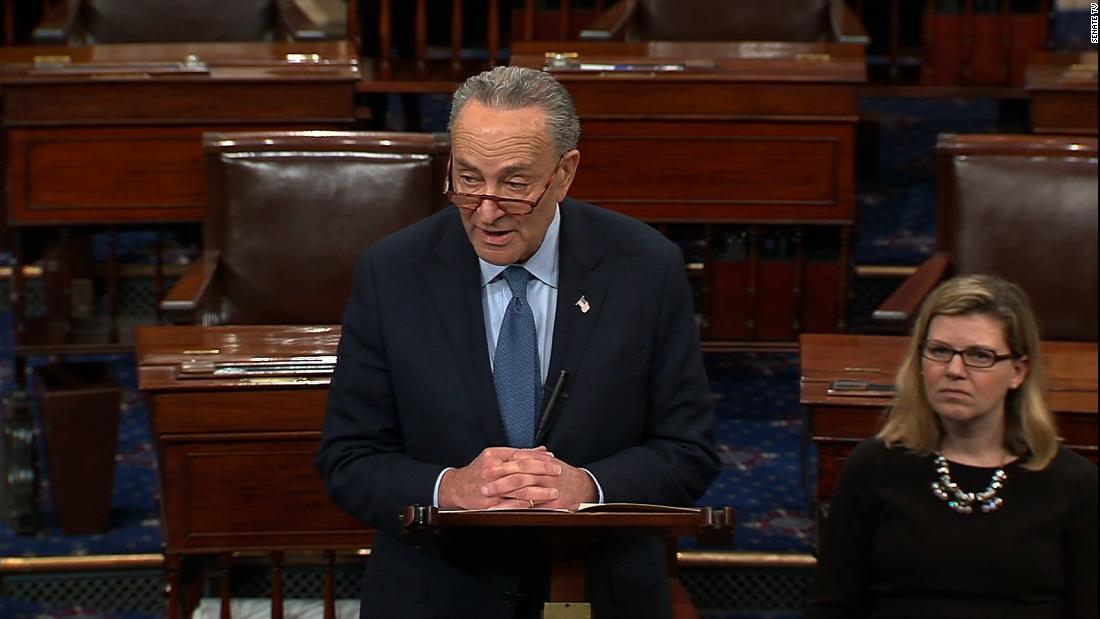 Senate Minority Leader Chuck Schumer addressed President Donald Trump while speaking on the Senate floor Saturday, saying, "President Trump, if you want to open the government, you must abandon the wall – plain and simple.”

Schumer said that Trump must publicly say he will support any agreement, saying he wants to avoid what happened earlier in the week when there were indications from White House aides that the President would sign a stop gap spending measure but then said he would not.

While Senate Majority Leader Mitch McConnell earlier said any agreement would need the support of both the President and Senate Democrats, Schumer said McConnell and House Speaker Paul Ryan must also support it publicly.

“Leader McConnell can’t duck out of it,” Schumer said.

As lawmakers look for a path forward to fund the government, President Donald Trump tweeted on Saturday that he "Will be having lunch in White House residence with large group concerning Border Security."

A funding deal has yet to be made days after Trump said he would not sign the legislation that had passed through the Senate earlier this week because it did not include $5 billion for a border wall.

When he was leaving the floor of the Senate, Majority Leader Mitch McConnell was asked if he was attending the lunch the President had just tweeted about.

McConnell said: “No. I am not going to lunch.”

McConnell also told reporters about any agreement to end the shutdown, “As I just said in the floor, this is between the democrats and the president and I hope they’re reaching an agreement sometime soon.”

In addition to McConnell, CNN has learned from aides that there are some Democrats not attending the lunch. Democratic leadership appear to have not been invited. Per aides, House Minority Leader Nancy Pelosi, House Minority Whip Steny Hoyer nor Senator Minority Leader Chuck Schumer would be at the White House residence.

CNN's Phil Mattingly and Sarah Mucha contributed to this report.

Senate Majority Leader Mitch McConnell says there will be no action on the Senate floor until President Donald Trump and Senate Democrats come to an agreement.

McConnell said the Senate will “push the pause button” until President Trump and Senate Democrats can come to an agreement on government funding.

He said there will be no procedural votes nor test votes until that time.

Any bill to re-open the government will need 60 votes to gain Senate passage because of procedural rules meaning Republicans will need some Democratic votes.

McConnell then transitioned to discuss the importance of border security and “securing the homeland.”