Parts of the government were set to shut down tonight at midnight if the President did not sign the bill into law. 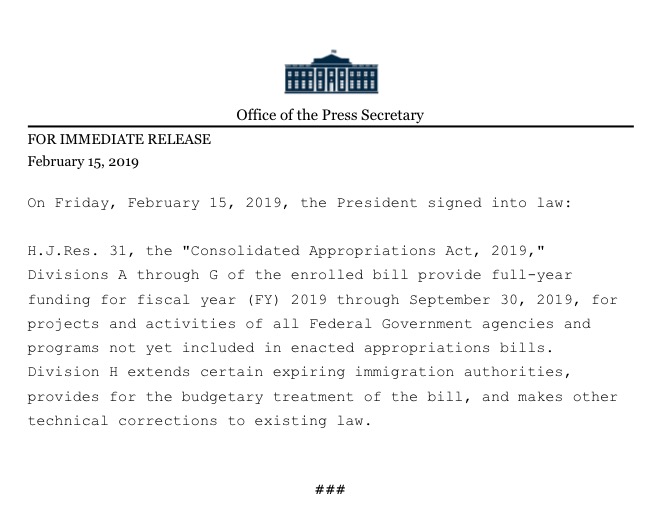 “By the president’s very own admission in the Rose Garden, there is no national emergency. He just grew impatient and frustrated with Congress, and decided to move along his promise for a border wall ‘faster,'" ACLU Executive Director Anthony Romero said in a statement.

This is a patently illegal power grab that hurts American communities and flouts the checks and balances that are hallmarks of our democracy."

The ACLU said it plans to argue "that President Trump’s use of emergency powers to evade Congressional funding restrictions is unprecedented." The group said it will release more details about the lawsuit next week.

She said that the President signed the bill, which both the House and Senate passed last night, about “20 minutes ago.”

Parts of the government were set to shutdown tonight at midnight if the President did not sign the bill into law.

BY THE PRESIDENT OF THE UNITED STATES OF AMERICA

The current situation at the southern border presents a border security and humanitarian crisis that threatens core national security interests and constitutes a national emergency. The southern border is a major entry point for criminals, gang members, and illicit narcotics. The problem of large-scale unlawful migration through the southern border is long-standing, and despite the executive branch's exercise of existing statutory authorities, the situation has worsened in certain respects in recent years. In particular, recent years have seen sharp increases in the number of family units entering and seeking entry to the United States and an inability to provide detention space for many of these aliens while their removal proceedings are pending. If not detained, such aliens are often released into the country and are often difficult to remove from the United States because they fail to appear for hearings, do not comply with orders of removal, or are otherwise difficult to locate. In response to the directive in my April 4, 2018, memorandum and subsequent requests for support by the Secretary of Homeland Security, the Department of Defense has provided support and resources to the Department of Homeland Security at the southern border. Because of the gravity of the current emergency situation, it is necessary for the Armed Forces to provide additional support to address the crisis.

Sec. 3. This proclamation is not intended to, and does not, create any right or benefit, substantive or procedural, enforceable at law or in equity by any party against the United States, its departments, agencies, or entities, its officers, employees, or agents, or any other person.

IN WITNESS WHEREOF, I have hereunto set my hand this fifteenth day of February, in the year of our Lord two thousand nineteen, and of the Independence of the United States of America the two hundred and forty-third.

During his immigration speech in the Rose Garden earlier today, President Trump said, "I have a lot of money, and I built a lot of wall" -- a misleading claim.

A number of contracts have been awarded for these projects: Among them, nearly $300 million to build 40 miles of replacement structures in multiple locations. As of December, 35 of those 40 miles had been completed, according to Andrew Meehan of Customs and Border Protection.

However, there are preparations for new wall construction underway. CBP has awarded contracts for around 14 miles of new wall. Construction in the Rio Grande Valley of Texas is expected to begin this month. Site preparations have already begun, according to a senior CBP official.

In his immigration speech in the Rose Garden, President Trump claimed that “two weeks ago, 26 were killed in a gunfight on the border a mile away from where I went.”

During the funding stalemate that shut down the government, the President visited McAllen, Texas in January.

Here's what we know: A day before his visit, Mexican authorities found a grisly scene that they described as a gang clash: At least 20 bodies, many of them burned, and military-style bullets, according to Irving Barrios Mojica, the attorney general of Tamaulipas.

But the bodies were found near the Mexican town of Miguel Aleman, located nearly 130 miles northwest from McAllen, according to Google Maps.

CNN has found no reports of 26 people killed in a gunfight within a mile of the area Trump visited.

In his immigration speech today announcing a national emergency, Trump said, "A big majority of the big drugs, the big drug loads don’t go through ports of entry."

It’s unclear what exactly Trump is claiming here regarding “big drug loads,” but the majority of hard narcotics seized at the border are coming through ports of entry — not between them as the President continues to claim.

Here are the facts:

The majority of hard narcotics seized by Customs and Border Protection come through ports of entry either in packages, cargo or with people who attempt to enter the US legally.

The only drug that is smuggled in higher numbers between legal entry points is marijuana, according to CBP and the Drug Enforcement Administration.

For example, the majority of the heroin flow on the southern border into the US is through privately owned vehicles at legal ports of entry, according to the DEA. About 90% of heroin seized at the border in the 2018 fiscal year was apprehended at ports of entry.

The majority of meth is also detained at the border. In 2018, CBP seized 67,292 pounds of meth at legal ports of entry, compared with 10,382 pounds by Border Patrol agents in between ports, based on available data.

McConnell — who had previously opposed an emergency declaration — said Thursday he would support the move after Trump agreed to sign the compromise legislation to avert another government shutdown.

“President Trump’s decision to announce emergency action is the predictable and understandable consequence of Democrats’ decision to put partisan obstruction ahead of the national interest. I urge my Democratic colleagues to quickly get serious, put partisanship aside, and work with the president and our homeland security experts to provide the funding needed to secure our borders as we begin the next round of appropriations.”