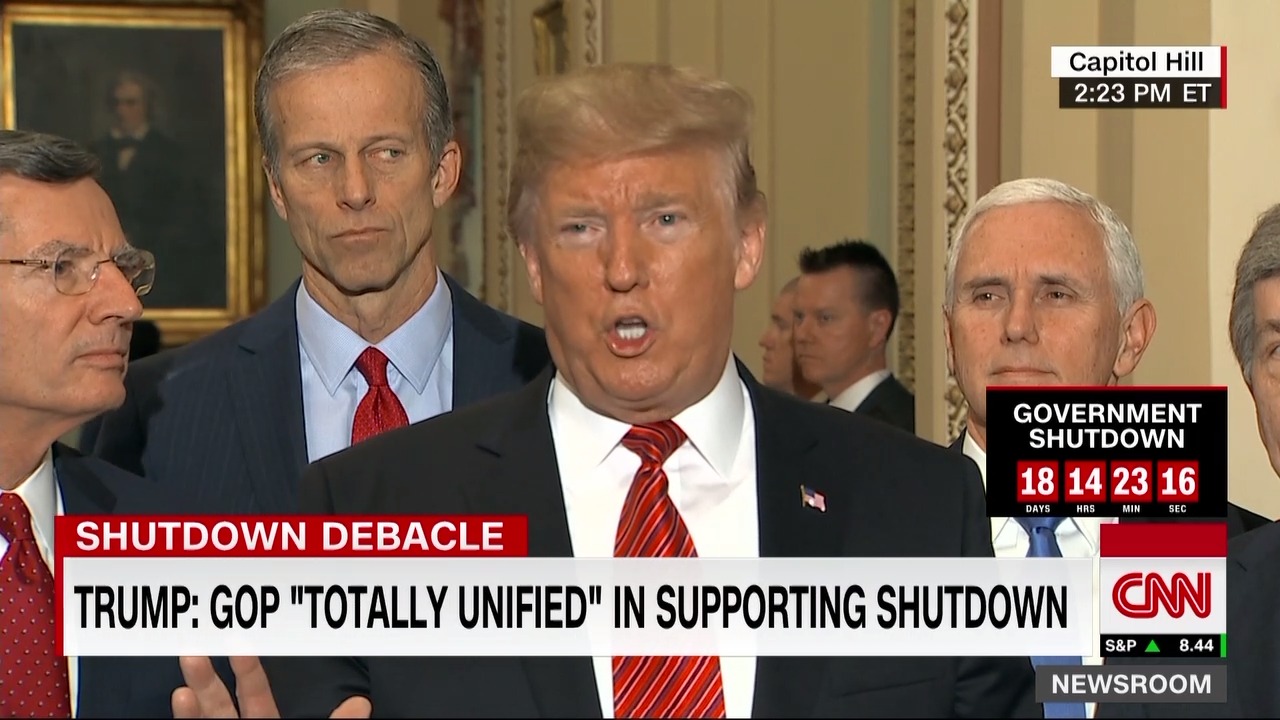 President Trump, leaving a meeting with Republican lawmakers on Capitol Hill, touted “solidarity” within his party.

“The Republican Party, I can say, and I just left an hour meeting, we had a great time actually. There was no discussion about anything other than solidarity. we want national security and border security for our country," he said.

"The Republicans are unified," he added.

This is similar to what he said going into the meeting.

But remember: At least three GOP senators — Susan Collins, Cory Gardner and Lisa Murkowski — are calling for an end to the shutdown. Several more have started to voice concerns.

President Trump said on Wednesday that he thinks a lot of the furloughed workers and others going without pay “agree” with his shutdown strategy, though he offered no names or specifics.

President Donald Trump on Wednesday again stressed the need for southern border wall to stem the flow of illegal immigration.

"They say it's a medieval solution, a wall. It's true, because it worked then and it works even better now," Trump said during a bill signing event in the Oval Office. 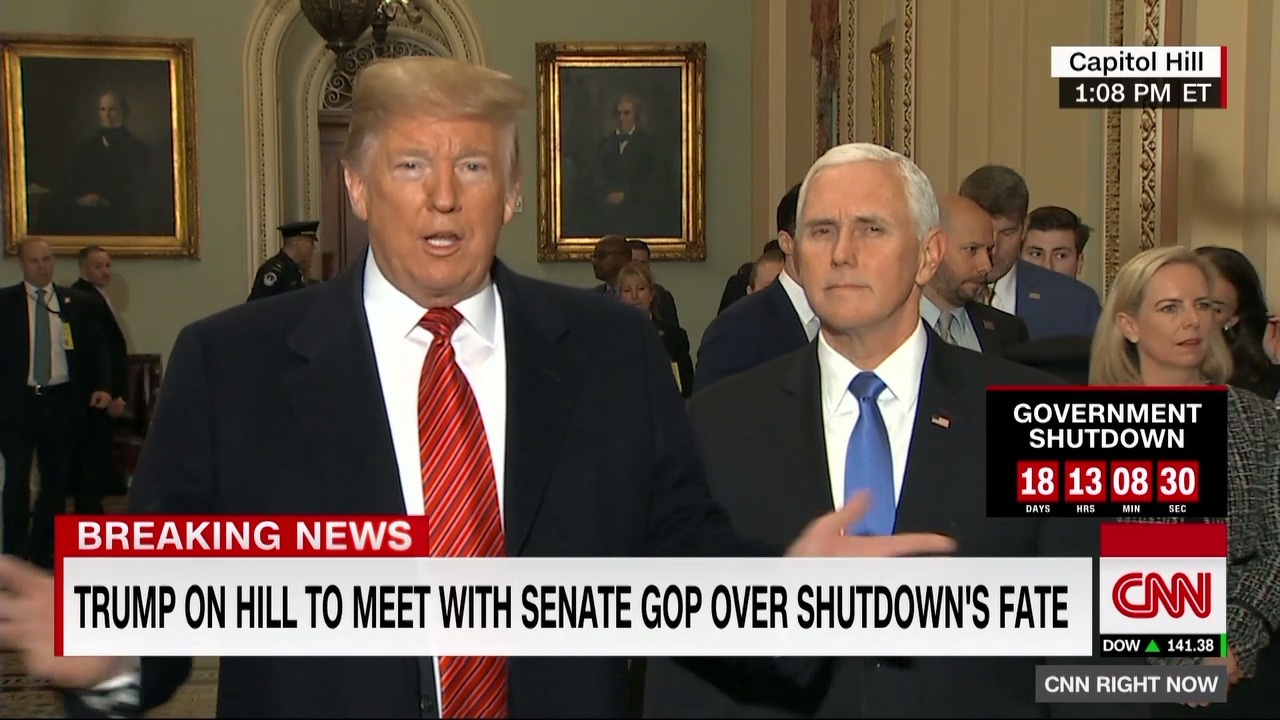 Asked if he was worried about the growing number of Republicans who are concerned as the shutdown drags into day 19, Trump dismissed any concerns, saying repeatedly that his administration has “great Republican support.”

Asked how long the shutdown will last, Trump said, “Whatever it takes.”

At least three GOP senators — Susan Collins, Cory Gardner and Lisa Murkowski — are calling for an end to the shutdown. Several more have started to voice concerns.

President Trump spoke further on the possibility of a national emergency declaration today.

“I think we might work a deal. And if we don’t we may go that route. I have the absolute authority to do a national emergency if I want," he said.

"My threshold will be if I can't make a deal with people that are unreasonable.”

President Trump offered a candid take on his political situation during remarks on border security Wednesday, saying frankly his base would abandon him if he reopens parts of government without securing funding for a border wall.

"Right now if I did something that was foolish like gave up on border security, the first ones that would hit me are my senators. They'd be angry at me," Trump said, expressing publicly what he's told lawmakers and allies over the past several weeks.

During a meeting in the Situation Room with top Democrats and Republicans last week, Trump told Senate Democratic Leader Chuck Schumer he would look "foolish" if he accepted Democrats' proposals to reopen the government.

But he hasn't said as much in public until Wednesday.

He went on, saying "The second ones (to hit me) would be the House and the third ones would be, frankly, my base and a lot of Republicans out there and a lot of Democrats that want to see border security."

Later, in an exchange with ABC's Jon Karl, Trump continued to lay out his political predicament.

"I'm asking you, would you do that if you were in my position?" Trump said. "If you would do that, you should never be in this position because you'd never get anything done." 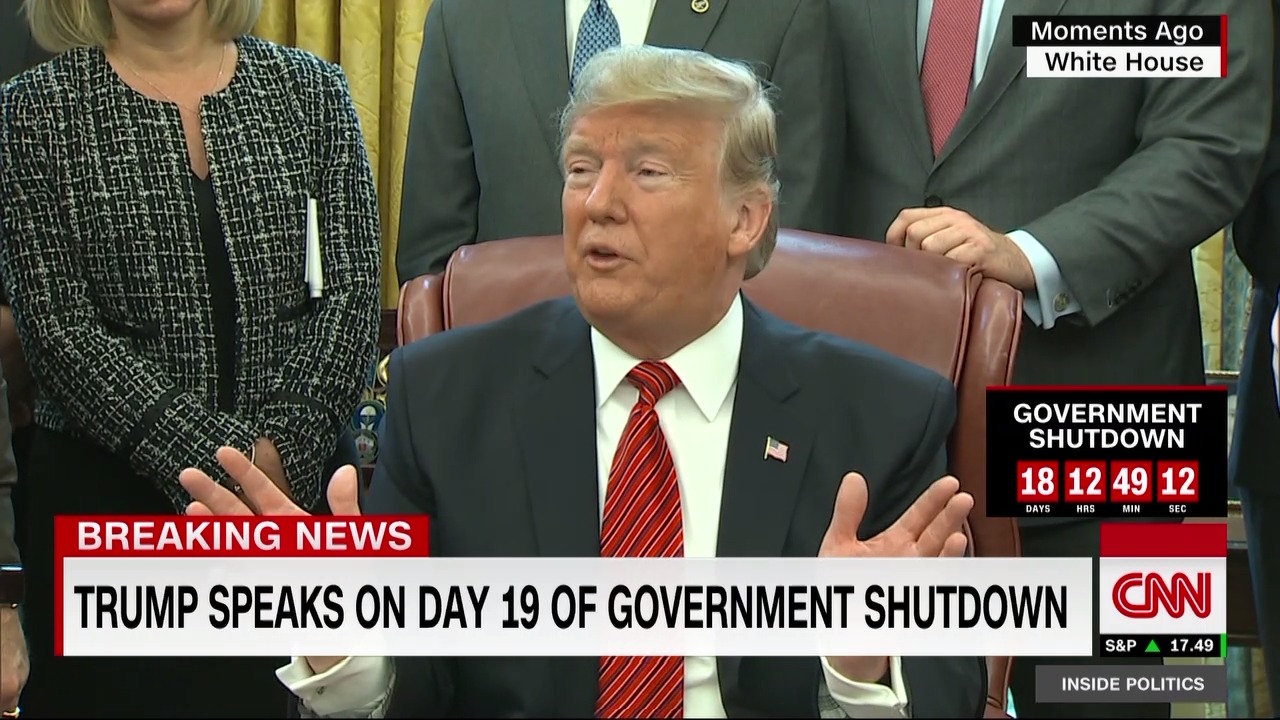 President Trump on Wednesday again stressed the need for a wall on the southern border to stem the flow of illegal immigration.

"We can all play games, but a wall is a necessity," Trump said. "They say it's a medieval solution, a wall. It's true because it worked then and it works even better now."

Despite those comments, the White House has yet to signal a willingness to reaching a broader deal that would include both funding for the wall and protections for undocumented immigrants, like DACA recipients. The White House previously walked away from such a deal last year. 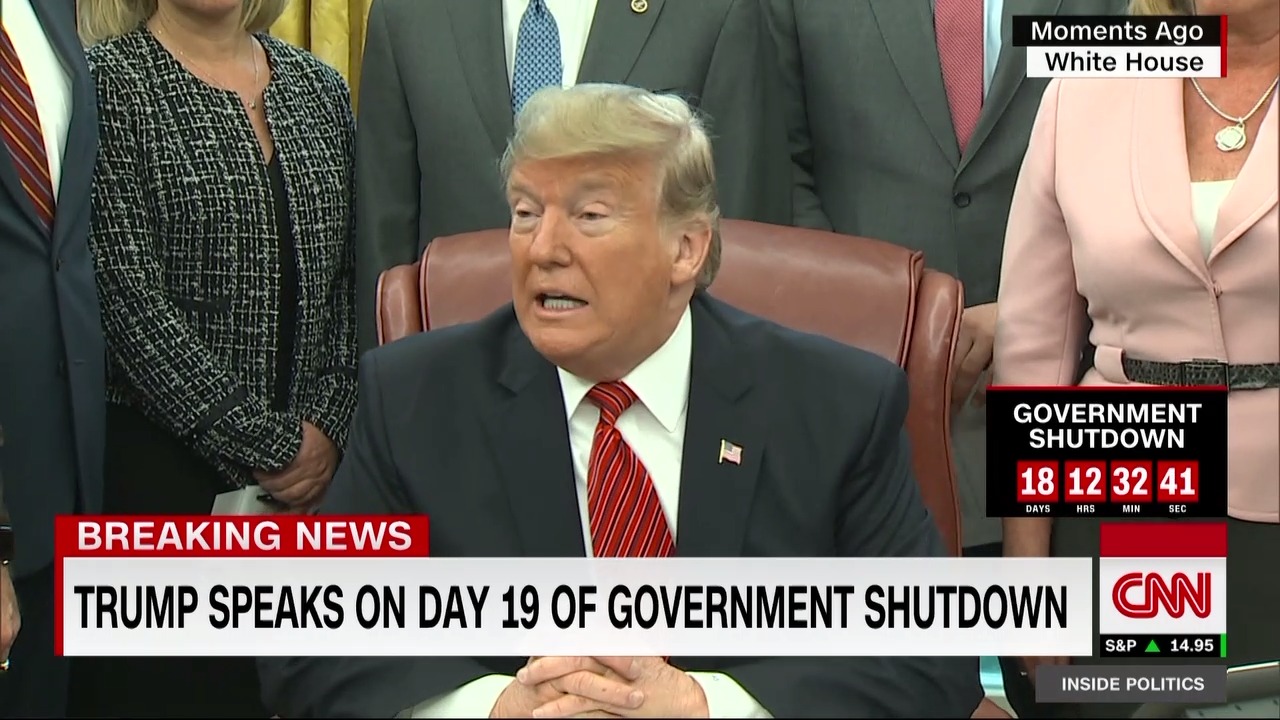 President Trump suggested a day after his primetime Oval Office address that he may use executive authority to secure funds for a border wall if negotiations break down with Democrats.

"I really believe the Democrats and the Republicans are working together. I think something will happen, I hope," he said during a bill signing event in the Oval Office. "Otherwise we'll go about it in a different manner."

In his remarks on Tuesday, Trump stopped short of declaring a national emergency to fund his promised border wall. But he's not ruled it out and is still mulling that option, according to aides.

Trump said on Wednesday the border remains a sore spot on an otherwise cheery record.

"We're having some very good times in our country. We're doing very well except for the border," he said. "The border is a big problem. It's a very dangerous problem."

"So many good things are happening, but we have to take care of the border and we're all working together," he said. 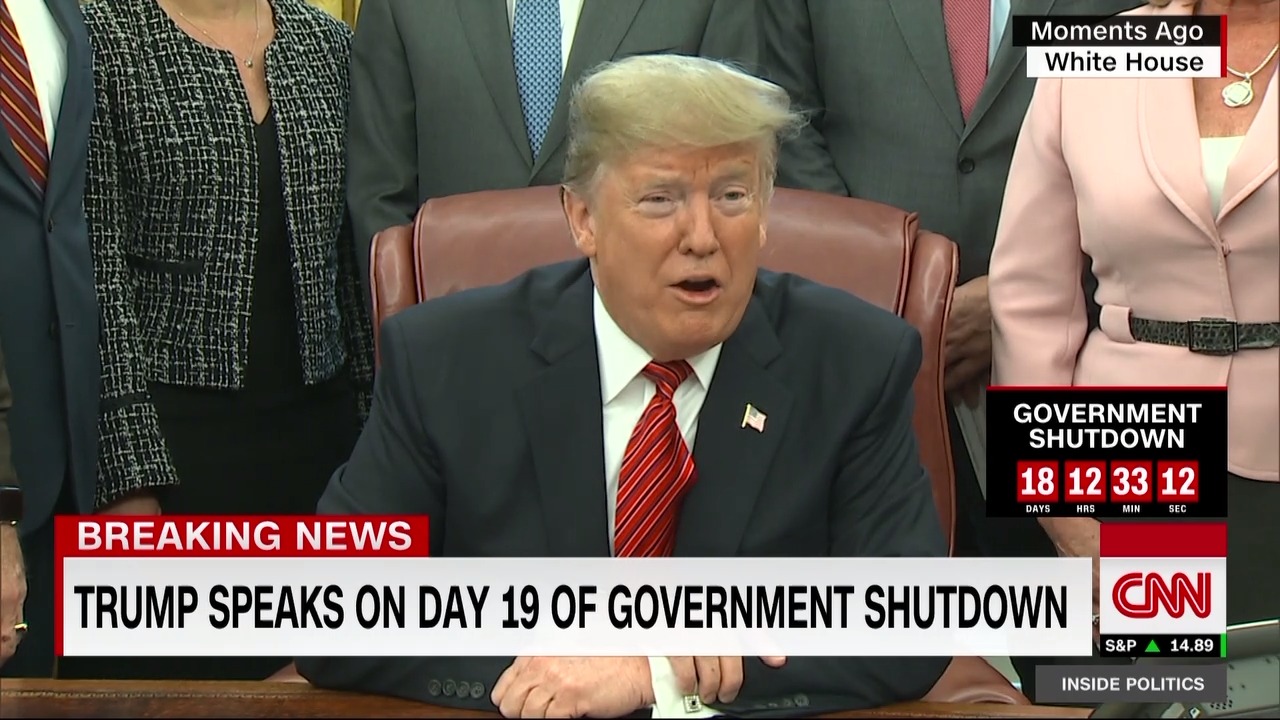 President Trump, speaking from the Oval Office Wednesday, showed some optimism over ongoing talks to reopen the government.

"I really believe the Democrats and the Republicans are working together. I think something will happen, I hope, otherwise we'll go about it in a different manner. I don't think we'll have to do that, but you never know," Trump said.

Lawmakers have yet to reach an agreement over Trump's funding demands for his long-promised border wall.

Trump will meet with congressional leaders at 3 p.m. ET today on the shutdown.