Bill Taylor, the top US diplomat in Ukraine, and GOP Rep. John Ratcliffe, talked over each other after the Republican congressman asked, "Where is the impeachable offense?"

Ratcliffe — who was asking questions after Rep. Mike Conaway yielded his time over — asked:

Taylor began to answer: "Mr. Ratcliffe, if I may respond let me reiterate that I'm not here..."

Ratcliffe said he only had one minute left to ask questions, and kept talking. The two men then both tried to keep speaking.

They eventually suspended the clock so Taylor could answer.

"I would like to say I'm not here to do anything having to do with — decide about impeachment," he said. "That is not what either of us are here for. This is your job."

Kent agreed with Rep. Jim Himes, a Connecticut Democrat, who said that Trump’s efforts to secure an investigation into Biden was not a “thoughtful and well-calibrated anti-corruption program.” This built on what Kent told lawmakers in his closed-door deposition last month, when he said asking Ukraine to investigate Biden “is not anti-corruption.”

From the beginning, Trump has argued that his requests to Ukraine were part of a good-faith effort to root out corruption in a notoriously crooked post-Soviet country. But those arguments have never added up, because Trump’s supposed “anti-corruption” campaign was only focused on one person – Biden, a leading opponent in the 2020 campaign – and Trump never brought up “corruption” in past public meetings with Ukrainian leaders.

The debate over whether Trump was targeting a political rival or genuinely trying to end corruption is critical to the impeachment inquiry. Democrats could draft articles of impeachment saying that Trump abuses his powers for political purposes. Republicans could argue that Trump was promoting legitimate US anti-corruption policy in Ukraine. But those GOP arguments have been undercut by Kent and other key witnesses in the inquiry.

Prior to asking the witnesses any questions, Democratic Rep. Jim Himes said, "One of the things I find startling about these proceedings is that, faced with very serious allegations of presidential misconduct, my colleagues on the other side of the aisle don't engage or defend that conduct."

Himes went on to say that, instead, Republicans "spin theories about black ledgers and Steel dossiers and the startling revelation that Ukrainians might have been upset when a presidential candidate suggested that perhaps he would let the Russians keep Crimea."

Himes said Republican Rep. Devin Nunes, in his opening statement, "most disgustingly attacked the extraordinary men and women of the state department and the FBI."

There are 20 House Intelligence Committee members who still get to ask questions.

So far, only Chair Adam Schiff and ranking member Devin Nunes — who gave his time to Rep. Jim Jordan — have completed their questions.

Rep. Jim Himes, a Democrat from Connecticut, is asking questions now. Here are the 19 others who will ask questions: 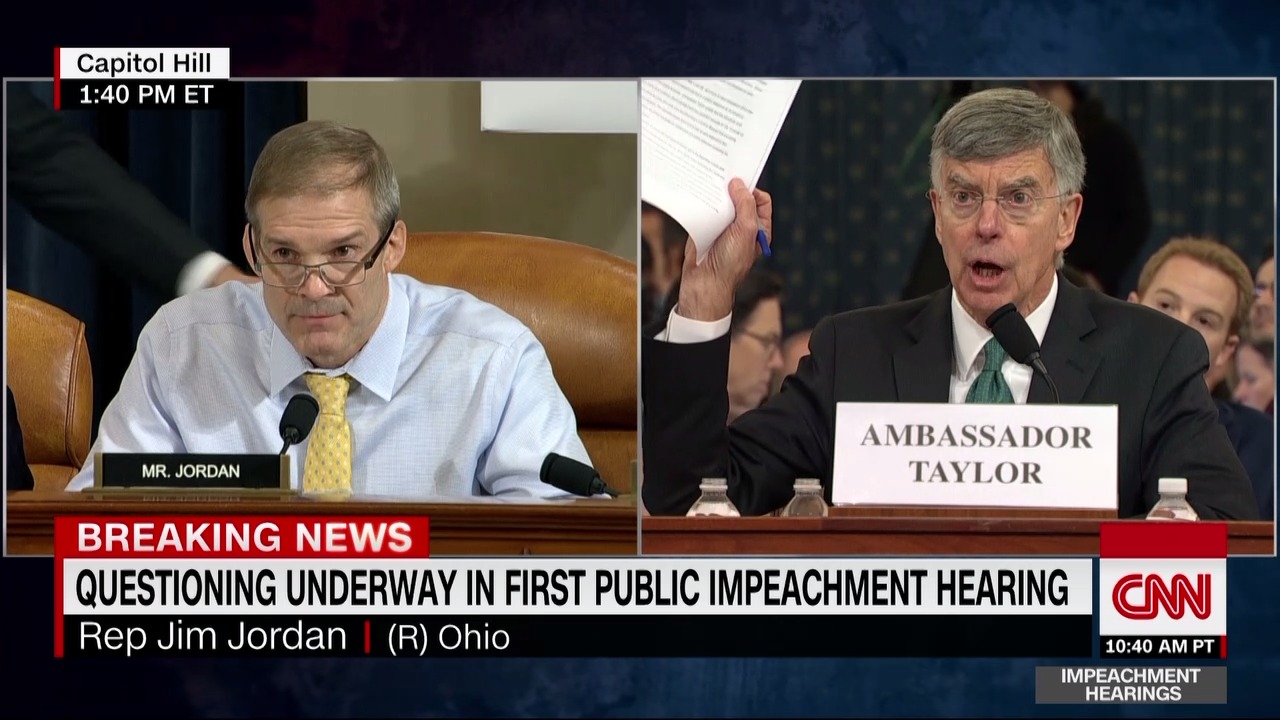 A sheet of paper was just handed to Bill Taylor, a top diplomat in Ukraine who is testifying now.

Rep. Jim Jordan, a Republican from Ohio who was questioning Taylor, explained the paper was taken from Ambassador to the European Union Gordon Sondland's testimony.

A CNN reporter asked President Trump's personal attorney Rudy Giuliani outside his New York City apartment today if he's concerned that some Republicans may blame him for seeking investigations from Ukraine, saying it was all his doing and not the President.

Giuliani laughed and said he’s not worried at all. He said there is no reason to be worried — that they can blame him if they want, but eventually the truth will come out.

“I didn’t do anything wrong," Giuliani said.

He added: "I was asked to look into an alternative explanation in November 2018, and I investigated and found evidence. If they just wait and are patient for all the facts to come out, they will see what the truth is."

It’s clear what GOP lawyer Steve Castor was trying to do during his first appearance at the highly anticipated public impeachment hearing. But US diplomats Bill Taylor and George Kent weren’t willing to follow Castor’s lead.

While questioning Kent, Castor teased out some of the concerns about Hunter Biden’s role on the board of Burisma, a Ukrainian energy company. Castor asked leading questions about Hunter Biden’s apparent lack of credentials for the role, with little experience in the energy sector. Kent didn’t take the bait; he replied that he hasn’t seen Biden’s resumé.

Castor moved to Taylor and pressed the US diplomat on whether Trump was right to question whether Ukraine meddled in the 2016 election, and whether Trump should be upset by reports about Ukrainian officials opposing his candidacy.

Taylor hesitated, seemingly a bit perplexed by the strange question. But he gave a careful response, noting that Trump mentioned during the 2016 campaign that he might let Russia keep Crimea, and that this “sentiment is amazingly inflammatory to all Ukrainians.” The implication was that if Ukrainians in fact opposed Trump, there was a good reason.

The Republicans' 45-minute round of questioning, lead by House lawyer Steve Castor, is over.

What happens now: Every member of the House Intelligence Committee will get five minutes to question diplomats Bill Taylor and George Kent.

Rep. Devin Nunes, the top Republican on the committee, asserted several times during his questioning of Bill Taylor that the Ukrainian government interfered in the 2016 election to help Hillary Clinton.

“Now they accuse President Trump of malfeasance in Ukraine when they themselves are culpable,” Nunes said. “The Democrats cooperated in Ukrainian election meddling.”

These allegations have been in the ether for years, and CNN reported about them in 2017. These discredited claims have been promoted by Trump and his Republican allies in Congress.

But multiple witnesses, including George Kent and Fiona Hill, previously told lawmakers that Ukraine didn’t meddle in the US election. In fact, it was the Russian government who got involved in the election by hacking and leaking Democratic emails to help Trump win.

“My knowledge is that there is no factual basis,” Kent told the committee.