Three more key witnesses testified in the House impeachment inquiry today. The hearings are over and so is our live coverage.

The most dramatic testimony came from US Ambassador to the European Union Gordon Sondland, who connected President Trump directly to the "quid pro quo." Later, Laura Cooper, a deputy assistant secretary of defense, and David Hale, the under secretary of State for political affairs, testified.

Here are some of the key moments:

Nunes closed out his final remarks of the day with a swipe at Chairman Schiff.

"For those of you at home, it's time to change the channel, turn down the volume or hide the kids, put them to bed," Nunes said.

He continued: "And now, I yield to Mr. Schiff for story-time hour."

With a hint of sarcasm in his voice, Schiff got some laughs from the hearing room when he replied, "I thank the gentleman as always for his remarks."

During the impeachment inquiry hearings, Republicans have, at several points, argued that President Barack Obama sent only blankets to Ukraine. Meanwhile, they point out that President Trump sent lethal military aid, including anti-tank missiles.

Facts First: While the Obama administration was criticized for its refusal to provide lethal assistance to Ukraine, it did provide more than $100 million in security assistance, as well as a significant amount of defense and military equipment.

By March 2015, the US committed more than $120 million in security assistance for Ukraine and had pledged an additional $75 million worth of equipment including UAVs, counter-mortar radars, Humvees, night vision devices and medical supplies, according to the Pentagon’s Defense Security Cooperation Agency.

But Obama did not provide lethal aid to Ukraine, and Trump did. The Trump administration approved sniper rifles, rocket launchers and Javelin anti-tank missiles, something long sought by Kiev.

Obama’s aid to Ukraine has long been criticized by Republicans.

“The Ukrainians are being slaughtered and we’re sending blankets and meals,” Republican Sen. John McCain said in 2015. “Blankets don’t do well against Russian tanks.”

House Intelligence Committee Chairman Adam Schiff asked Laura Cooper about staff inquiries received on July 25. This is the key change where she said that the Ukrainians asked about the military aid in July because they were concerned there was “some kind of issue.”

Remember: Cooper, a deputy assistant secretary of defense, said she couldn’t say for certain whether the Ukrainian check-ins were because they were aware a hold was in place, but says that was the impression her staff got from the contacts.

Here's the full back-and-forth with Schiff:

Schiff: As early as July 25, the same day President Trump spoke with President Zelensky on the phone and asked for this favor, the same day that President Zelensky thanked the United States for its military support and signaled it was ready to purchase more javelins on that date, you got inquiries — your staff got inquires from someone at the Ukrainian embassy who was concerned about the status of the military assistance. Is that correct?
Cooper: Sir, that's correct. I would say that specifically the Ukrainian embassy staff asked what is going on with Ukrainian security assistance.
Schiff: And did that connote to you that they were concerned that something was in fact going on with it?
Cooper: Yes, sir.
Schiff: And you received — I guess your staff received more than one inquiry on that date. What was the other — the nature of the other inquiry on July 25?
Cooper: Sir, the — that was the one inquiry to my staff. But the other points that I had raised were emails reflecting outreach to the State Department.
Schiff: So the Ukraine embassy was also contacting the State Department to find out about its portion of military assistance?
Cooper: Yes, sir.
Schiff: And was that, similarly, a concern about what's going on with our military aid?
Cooper: It was similarly a question about what — what's going on with security assistance.
Schiff: And your staff or one of the other Department staff also heard in August additional inquiries from the Ukraine embassy about a potential holdup in the military assistance?
Cooper: Sir, I want to be careful about how I phrase this. My staff recall having had meetings with Ukrainian embassy representatives during the month of August. And they believe that the topic came up at some point during those meetings, but they don't recall the precise date or, specifically what the — the nature of the discussion was.
Schiff: But your staff at least gleaned from those conversations that the Ukrainian embassy was aware that there was some kind of a hold on the assistance?
Cooper: Sir, the way I would phrase it is that there was some kind of an issue, yes.

David Hale, the undersecretary of state for political affairs, said that what happened to ousted Ukraine ambassador Marie Yovanovitch — who was fired by Trump after what she characterized as a "smear campaign" — was wrong.

Rep. Denny Heck asked Hale if he agreed that Yovanovitch served with dignity and grace in the face of "the smear campaign." Hale replied, "Yes, she did."

When Heck asked if Hale agreed Yovanovitch is a "dedicated and courageous patriot," Hale responded, "I endorse what you say exactly."

On Yovanovitch's ouster, Hale said, "I believe that she should have been able to stay at post and continued to do the outstanding work."

More context: Earlier this week, Yovanovitch testified about the "smear campaign" against her. She claimed that Rudy Giuliani and other made false allegations against her. During the hearing, Trump attacked Yovanovitch on Twitter causing some Democrats to accuse the President of witness intimidation.

US Ambassador to the EU Gordon Sondland boarded his flight back to Brussels after his impeachment inquiry testimony — and accidentally put his carry-on bag into the wrong overhead bin.

Karen-Marie Hyland was on the flight with him. She tells CNN his response to the luggage mix-up was, "My whole day has been like this."

She snapped this picture of the ambassador on the plane: 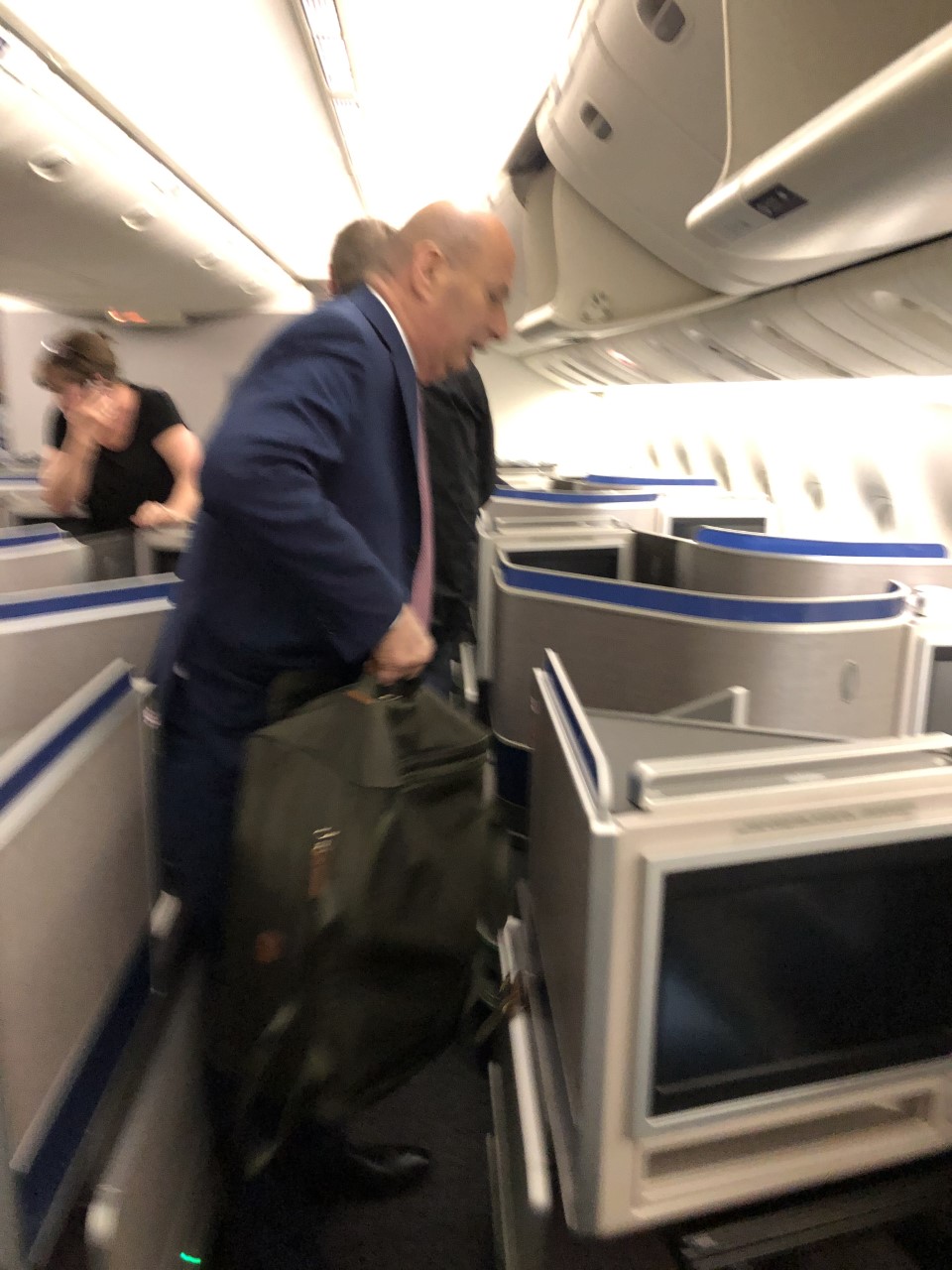 Top Pentagon official Laura Cooper testified that Ukrainian officials knew as early as July 25 that there was an issue with US aid to the country.

This undercuts a key Republican rebuttal to accusations of a "quid pro quo" linking the aid to investigations into President Trump's political rivals.

In their defense of Trump, Republicans have alleged that no bribery could exist if the Ukrainians weren't aware the aid was being held.

But Cooper, the deputy assistant secretary of defense for Russia, Ukraine and Eurasia, testified as part of the House impeachment inquiry that some members of her staff recalled receiving emails from the Ukrainian embassy on July 25 -- the same day as Trump's much-scrutinized phone call with the Ukrainian president.

"What was going on with Ukrainian security assistance?" one Ukrainian contact emailed a member of her staff, Cooper said.

Laura Cooper, a deputy assistant secretary of defense, describes three interactions by her staff on July 25 that indicate the Ukrainian government was aware there was an issue with US aid to the country.

Why this matters: This dramatically shifts the timeline of when the Ukrainian government was aware of the issues surrounding the aid.

And that, in turn, dramatically undercuts a key Republican talking point: that there could not be a “quid pro quo” if the Ukrainian government wasn’t aware the aid was being held up.

Undersecretary of state David Hale said he wouldn't characterize a hold on foreign aid as "normal" but said it does happen.

Asked by Republican Rep. John Ratcliffe — who pointed out that other countries such as Pakistan and Lebanon have recently had their aid held up — asked Hale if it was normal to have delays on foreign aid.

"It is certainly an occurrence. It does occur," Hale said.