Republicans have a new staffer asking questions today, according to Republicans on the House Judiciary Committee.

Rep. Mike Conaway said he worked with Callen at the House Agriculture Committee.

"Her dedication to her work is only matched by her devotion to her family. Ashley has a deep understanding of the law, and her commitment to oversight makes her a terrific asset to the judiciary committee," he said.

The House Judiciary Committee is holding another hearing, during which congressional investigators will lay out their case for impeaching the President.

The hearing will follow a similar format to pervious impeachment inquiry hearings in both the House Judiciary and House Intelligence committees.

Here's how we're expecting today to play out:

Democratic members on the House Judiciary Committee still haven’t been told about what is in the articles of impeachment, despite a weekend of marathon meetings prepping for today’s hearing.

They talked about articles more generally in their meetings but have not been told when the committee vote will occur or what’s in the articles — a sign of how closely held this discussion has been between House Speaker Nancy Pelosi, House Judiciary Chair Jerry Nadler and House Intelligence Chair Adam Schiff. 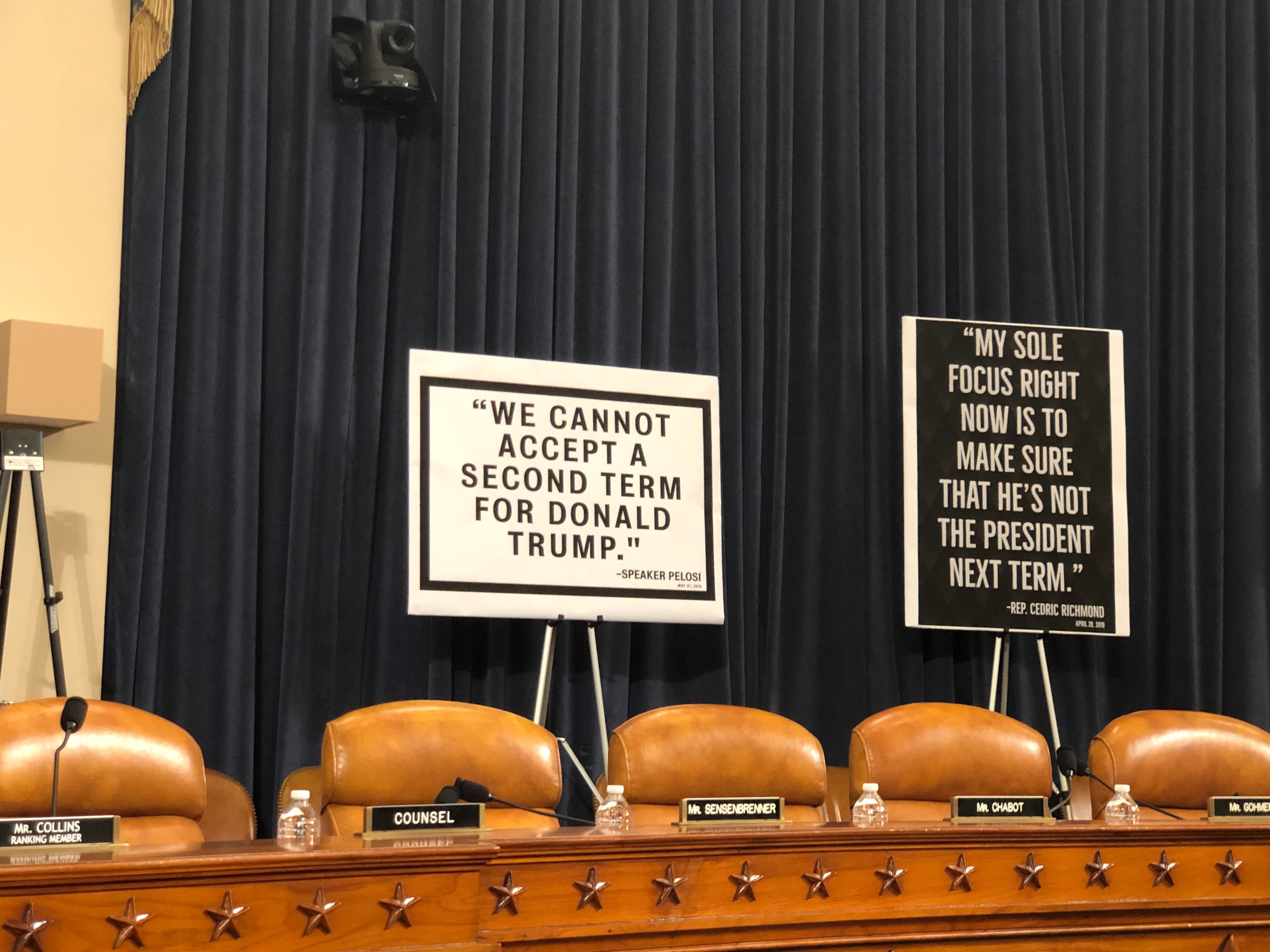 House Judiciary Republicans have already put up their signs ahead of today's impeachment inquiry hearing.

One is a quote from Speaker of the House Nancy Pelosi: "We cannot accept a second term for Donald Trump."

The other is a quote from Democratic Rep. Cedric Richmond: "My sole focus right now is to make sure that he's not the President next term."

Throughout the impeachment inquiry hearings, Republicans have displayed quotes and talking points on posters in the hearing room. 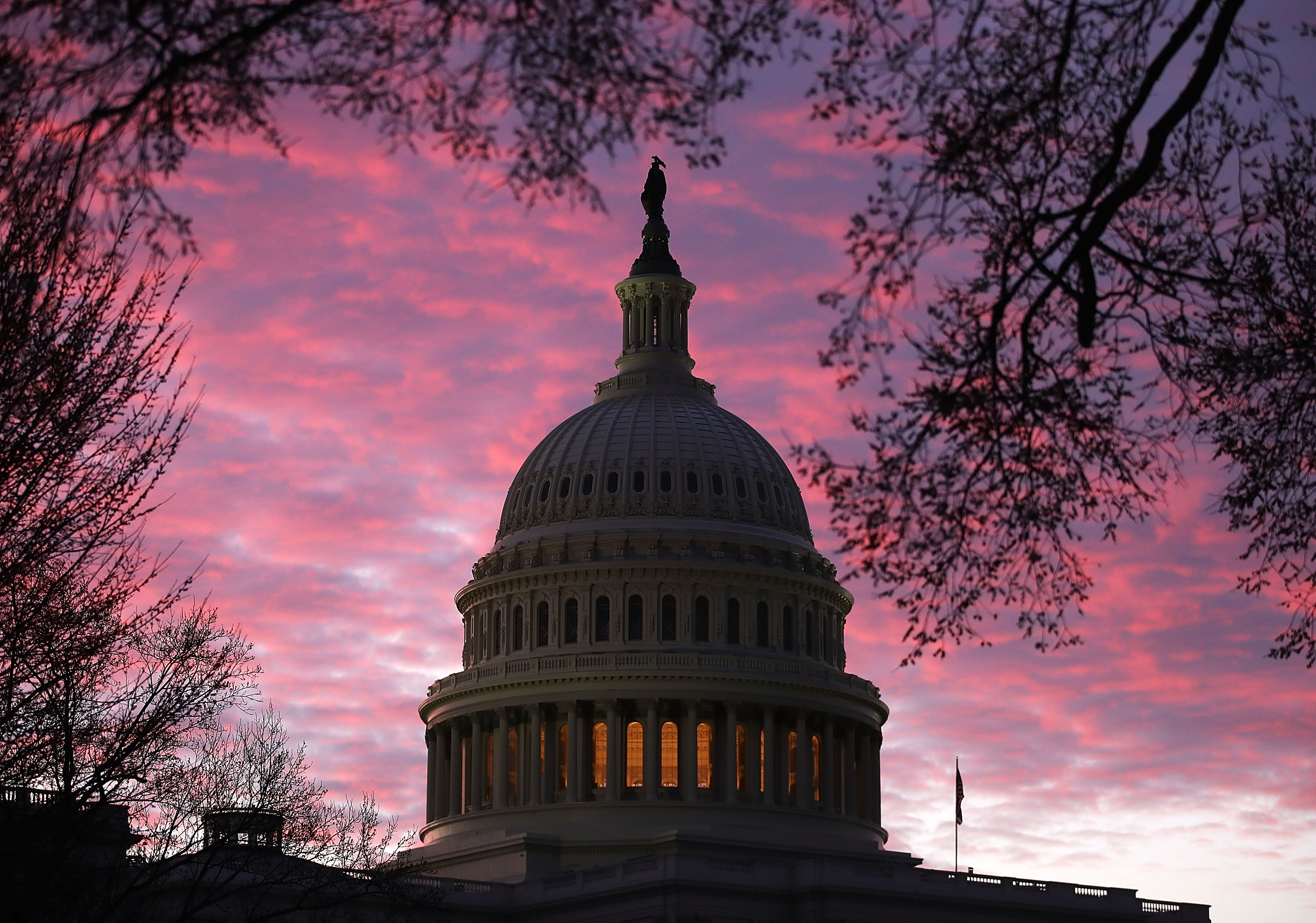 It's going to be another busy day on Capitol Hill as the House presses forward with the impeachment inquiry.

The House Judiciary Committee will hold its next impeachment hearing at 9 a.m. ET. Member are expected to hear evidence from the staff counsels of both the House Intelligence and Judiciary committees.

After that timing, it gets a little unclear, but here's a general sense of how the impeachment process will work:

Lawmakers on Capitol Hill continue to work on the impeachment inquiry into President Trump.

A trio of legal scholars argued at the first House Judiciary Committee impeachment hearing Wednesday that President Trump's unprecedented conduct was evidence of impeachable offenses, amid vocal protests and procedural roadblocks thrown up by Republicans to challenge the impeachment proceedings.

The opening impeachment hearing held by the panel tasked with drafting articles of impeachment was contentious from the moment Chairman Jerry Nadler gaveled it into session until he banged the hearing to a close more than eight hours later. Republicans repeatedly forced procedural votes and peppered Nadler with questions about what the committee was doing as they dismissed the entire proceeding as a sham.

Three professors, Harvard University's Noah Feldman, Stanford University's Pamela Karlan and the University of North Carolina's Michael Gerhardt, were all asked, based on the House Intelligence Committee evidence, "Did President Trump commit the impeachable high crime and misdemeanor of abuse of power?" All said that he did.

"If what we're talking about is not impeachable, then nothing is impeachable," Gerhardt said. "This is precisely the misconduct that the framers created a Constitution, including impeachment, to protect against."

While the three Democratic-invited law professors backed impeachment, the law professor called by Republicans to testify, George Washington University's Jonathan Turley, argued that Democrats were making a mistake by pursuing a "slipshod" impeachment that would have long-lasting consequences.

"I am concerned about lowering impeachment standards to fit a paucity of evidence and an abundance of anger. I believe this impeachment not only fails to satisfy the standard of past impeachments but would create a dangerous precedent for future impeachments," Turley said.

Putting the hearing in context: The hearing marked an important step for Democrats in the impeachment proceedings, which have shifted from the House Intelligence Committee-led investigation to the Judiciary panel. Democrats are on track for an impeachment vote on the House floor by the end of the year, and House Speaker Nancy Pelosi held a closed-door, members-only meeting Wednesday morning where Democrats agreed to continue moving forward with the inquiry, asking her members: "Are you ready?"

The hearing was only the latest sign that all sides of the Capitol are preparing for an impeachment vote -- and a subsequent trial in the Senate.

Chairman Jerry Nadler has released the names of the counsels to the House Permanent Select Committee on Intelligence and the House Judiciary Committee who will present in the ongoing impeachment inquiry into President Trump.

House Committee on the Judiciary

Today's hearing will begin at 9 a.m. ET and will proceed in two phases. First, majority and minority counsel for the Judiciary Committee will present opening statements for up to one hour, equally divided. 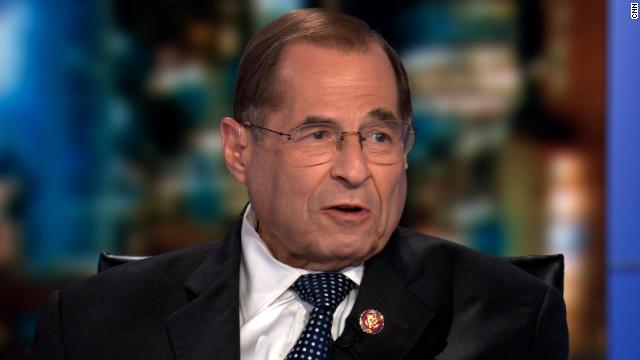 The House Judiciary Committee on Saturday released a report ahead of Monday’s impeachment hearing laying out historical arguments for impeachment.

The report does not accuse President Trump of committing impeachable offenses, but it lays the groundwork for Monday's hearing, where evidence against Trump will be presented by the House Intelligence and Judiciary Committees, as well as the possible introduction of articles of impeachment next week.

“The Framers' worst nightmare is what we are facing in this very moment,” House Judiciary Chairman Jerry Nadler said in a statement. “President Trump abused his power, betrayed our national security, and corrupted our elections, all for personal gain. The Constitution details only one remedy for this misconduct: impeachment. The safety and security of our nation, our democracy, and future generations hang in the balance if we do not address this misconduct. In America, no one is above the law, not even the President.”

The report is an update to the Judiciary Committee reports that were issued in 1974 and 1998 during the impeachment proceedings of Presidents Richard Nixon and Bill Clinton.

“The earlier reports remain useful points of reference, but no longer reflect the best available learning on questions relating to presidential impeachment,” Nadler wrote in a forward introducing the report. “Further, they do not address several issues of constitutional law with particular relevance to the ongoing impeachment inquiry respecting President Donald J. Trump.”