Our live coverage of the impeachment inquiry has ended for the day. Read below for the latest news. 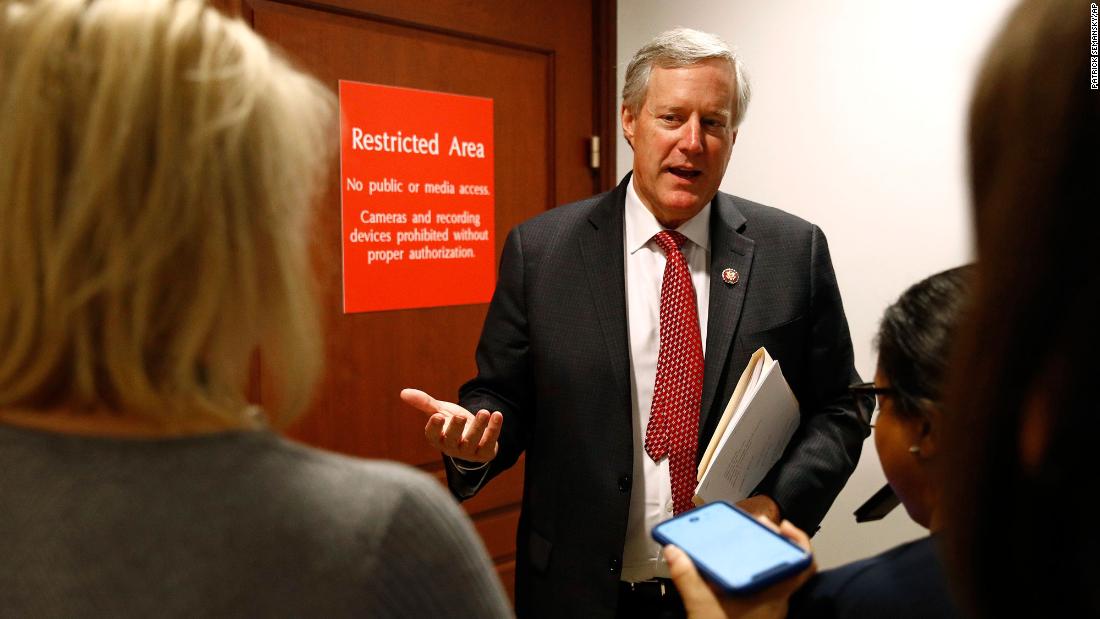 Before the questioning even begins, Republicans call foul.

"This is a partisan investigation," declared Rep. Jim Jordan, an unofficial leader of the GOP's impeachment response, at the start of a closed-door deposition with the ousted US ambassador to Ukraine.

"You are willfully selecting facts and omitting others," said Rep. Mark Meadows, another Republican leader of the impeachment rebuttal efforts, as investigators were preparing to interview a former State Department adviser.

"If we're going to continue this circus, I, at least, would like to know what time the circus begins," complained Rep. Devin Nunes, the top Republican on the House Intelligence Committee, ahead of an interview with the US ambassador to the European Union.

In a pattern established over four closed-door depositions whose transcripts were released this week, Republicans have used their allotted time to question the impeachment inquiry's validity and accuse Democrats of shutting them out of the process.

But for all of the Republicans' complaints about unfairness, the transcripts indicate they were fully involved in the questioning of witnesses during the sometimes-contentious closed door hearings. Over the course of the lengthy sittings, Republicans, Democrats and witnesses' lawyers have clashed over the propriety of questions and the terms of the proceedings.

It mirrors their public attempts to discount the impeachment probe, including an attempt to storm the secure hearing room where the depositions have occurred.

The transcripts provide the fullest picture yet of the closed depositions, which have occurred over long days inside a stuffy room in the basement of the US Capitol. As the inquiry enters a more public phase, the back-and-forth that transpired in private provides a likely preview of upcoming open hearings, where procedural matters and questions of the impeachment probe's legitimacy are likely to arise.

The stern language from campaign manager and communications director Kate Bedingfield comes after the release of deposition transcripts today from US Ambassador to the European Union Gordon Sondland and former special envoy for Ukraine Kurt Volker's testimonies.

"This is a historic moment that underscores how tragic Donald Trump's misconduct, debasement of his office, and betrayal of American values really is. It also reveals even more about the appalling depths to which Donald Trump was willing to sink in order to escape facing Joe Biden next year — directly undermining American national security for the sake of his re-election. The person entrusted with being our commander-in-chief withheld military aid to a country fighting for its life to pressure it into smearing the domestic political rival he fears the most. Donald Trump's dangerous unfitness to serve as president has been obvious long before we learned of this, but the abuse of power he committed is unprecedented and it is undeniable that he has violated his oath of office and insulted the trust the American people must have in a commander in chief."

Former US special envoy for Ukraine Kurt Volker on the one hand defended Rudy Giuliani, but at the same time told the House committees that former national security adviser John Bolton “did not engage” on his warnings about Giuliani, undercutting established foreign policy efforts in Ukraine.

According to a transcript of his testimony, Volker had a conversation with Bolton about Giuliani “earlier in August,” in which he said “basically the same as with Secretary Mike Pompeo: "I want you to know Giuliani's out there spinning these narratives. I'm concerned that this is affecting the President's views of Ukraine.'"

“I'm trying to work with Ukrainians, and they are trying to communicate a message back to Bolton to convey that they are actually a different crowd, not from 2016, not corrupt, so that positive message gets back to the President. So I explained all that to Bolton,” Volker said. “He did not engage on that, by the way,” Volker added. “Secretary Pompeo, as I said, ‘Good. I'm glad you' re doing that.’ Bolton just kind of said, ‘Okay.’”

Yet Volker said earlier in his testimony that he never felt like Giuliani did anything against US interests. And in fact, Volker believed he Giuliani was helping advance US interests and that’s why he put the Ukrainians in touch. 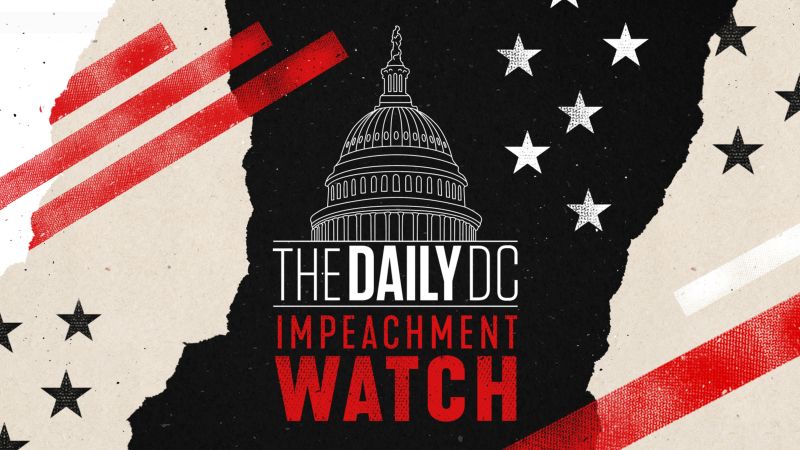 CNN Political Director David Chalian looks at the transcripts of interviews with US Ambassador to the European Union Gordon Sondland and former special envoy for Ukraine Kurt Volker on the latest episode of "The Daily DC: Impeachment Watch" podcast.

The House Intelligence, Foreign Affairs and Oversight Committees released deposition transcripts of Sondland and Volker today as they shifted toward the public phase of their impeachment inquiry.

"I think I said: It looks like your call is finally on, and I think it's important that you, you know, give President Trump — he wanted this — some kind of a statement about corruption," Sondland told the House committees, according to the transcript released Tuesday.

This highlights that Trump's requests to Zelensky on July 25 for political help weren't off-the-cuff.

"And, you know, it was just sort of a 'I'm handing it off to you now, we finally got this done.' And he was very happy and said: Great, we'll have a good call tomorrow," Sondland added.

Sondland and Zelensky's call happened July 19, and the Trump-Zelensky call was originally scheduled for the next day, then pushed back to July 25. 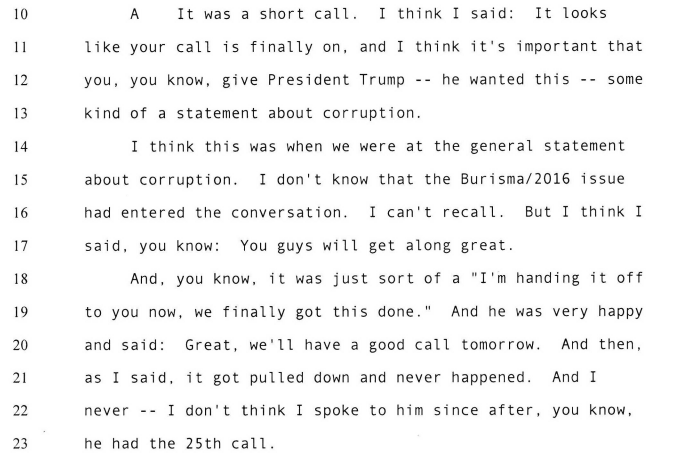 Kurt Volker, the former special envoy to Ukraine, acknowledged that Rudy Giuliani brought up Joe Biden – by name – during at least one conversation.

It happened on July 19, when they met for breakfast, according to the transcript. Giuliani brought up all the Biden accusations and Volker pushed back, saying it was “simply not credible” that Biden would abuse his office.

There has been no evidence of wrongdoing by Joe Biden.

“One of the things that I said in that breakfast that I had with Mr. Giuliani, the only time Vice President Biden was ever discussed with me, and he was repeating he wasn't making an accusation and he wasn't seeking an investigation but he was repeating all of the things that were in the media that we talked about earlier about, you know, firing the prosecutor general and his son being on the company and all that,” Volker told lawmakers.

Volker continued, “And I said to Rudy in that breakfast the first time we sat down to talk that it is simply not credible to me that Joe Biden would be influenced in his duties as Vice President by money or things for his son or anything like that. I've known him a long time, he's a person of integrity, and that's not credible.”

The acknowledgement from Volker that Biden was specifically named during his conversations with Giuliani stands in contrast with US Ambassador to the European Union Gordon Sondland, who has maintained all along that he didn’t make the Biden-Burisma connection until after the scandal burst into public view. 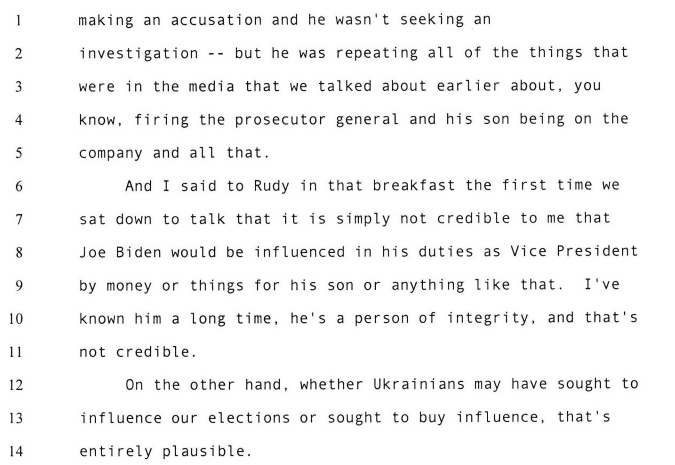 The House Intelligence, Foreign Affairs and Oversight committees sent Mulvaney a letter today requesting he appear for a closed-door deposition as part of the Democrats' impeachment inquiry into President Trump and Ukraine.

"We believe that you possess substantial first-hand knowledge and information relevant to the House's impeachment inquiry," the Democratic chairs wrote.

They also wrote that "the evidence and public reporting suggest you played a central role in President Trump's attempt to coerce Ukraine into launching his desired political investigations."

It is unclear if Mulvaney will show up to testify before the committees.

Gordon Sondland, the US ambassador to the European Union, described to lawmakers his phone call with President Trump after receiving a text from diplomat Bill Taylor, calling a potential quid pro quo over military assistance to Ukraine "crazy."

On Sept. 9, Taylor, the top diplomat to Ukraine, texted Sondland, “I think it’s crazy to withhold security assistance for help with a political campaign.”

Sondland testified that the text was “fairly shocking” and called the President.

Here what he said about the call with Trump:

Sondland testified that “there were a lot of rumors swirling around as to why the aid had been held up, including they wanted a review, they wanted Europe to do more. There were all kinds of rumors. And I know in my few previous conversations with the President he’s not big on small talk so I would have one shot to ask him. And rather than asking him, ‘Are you doing X because of X or because of Y or because of Z’ I asked him one open-ended question: 'What do you want from Ukraine?'”

“And as I recall, he was in a very bad mood. It was a very quick conversation. He said: 'I want nothing. I want no quid pro quo. I want Zelensky to do the right thing.' And I said: 'What does that mean?' And he said: 'I want him to do what he ran on.' And that was the end of the conversation. I wouldn’t say he hung up on me, but it was almost like he hung up on me,” Sondland added.

Sondland then reached back out to Taylor, and suggested he call Secretary of State Mike Pompeo.