Our live coverage of the impeachment inquiry has ended for the day. Read up on the latest developments below. 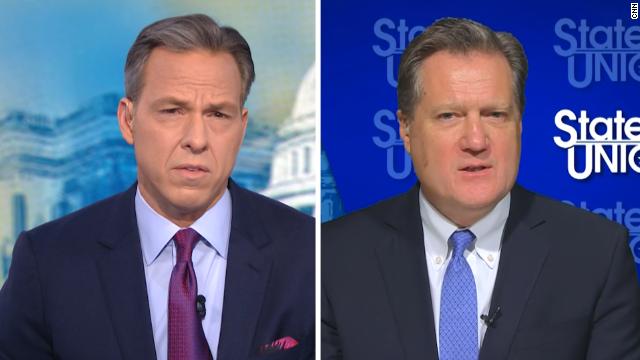 A Republican member of one of the House committees involved in the impeachment inquiry into President Trump said today that information provided about Trump during a closed-door deposition of a former National Security Council official "is alarming" and "not okay."

"Well, of course, all of that is alarming. As I've said from the beginning, I think this is not okay. The President of the United States shouldn't even in the original phone call be on the phone with the president of another country and raise his political opponent," Rep. Mike Turner, an Ohio Republican, told CNN's Jake Tapper on "State of the Union."

"I think along with most people, I find the President's tweets, generally, unfortunate," Turner said.

New transcript: Tim Morrison, former National Security Council official, testified that US ambassador to the European Union Gordon Sondland was acting at Trump's instruction in his dealings with Ukraine, according to transcripts released Saturday.

According to Morrison's deposition, Sondland said the President told him that Ukrainian President Volodymyr Zelensky "must announce the opening of the investigations" into former Vice President Joe Biden and his son, Hunter Biden. Morrison also testified that US aid to Ukraine was conditioned on the country announcing an investigation into the Bidens. There is no evidence of wrongdoing by either Biden in Ukraine.

Morrison's testimony, which was released by House impeachment investigators on Saturday, adds additional corroboration to the testimony of others, like US diplomat Bill Taylor, that Sondland said he was acting at Trump's direction when he was urging Ukraine to announce political investigations.

Lawmakers on Capitol Hill were busy this weekend as the impeachment inquiry into President Trump continued.

Rep. Chris Stewart, a Republican from Utah, said today that he had no issue with the State Department releasing documents and having a White House official testify, as requested by the House Intelligence Committee’s impeachment inquiry, though he tied the release to an agreement for the whistleblower to testify.

When asked on ABC’s “This Week” by fellow Intelligence Committee member Rep. Sean Maloney, a Democrat from New York, if Stewart would commit to calling for the State Department to release documents Stewart said, “You bet because I don’t think there’s anything there at all that’s going to implicate the President. If, Sean, you will join with me in calling to hear from the whistleblower.”

Then, when asked by George Stephanopoulos if Stewart would be OK with John Bolton and Mick Mulvaney testifying, Stewart said, “I don’t think there’s any of this information that is going to implicate the President. I don’t care if they release it.”

Near the end of the show Stewart was asked if he felt it was right how the president attacked former US Ambassador to Ukraine Marie Yovanovich and he said, “The President communicates in ways that sometimes I wouldn’t.”

Stewart and Maloney disagreed over whether evidence in the inquiry is mounting with Stewart saying it’s “crumbling” while Maloney said it’s “building.”

Stewart also said he didn’t believe US Ambassador to the EU Gordon Sondland perjured himself in his initial deposition with the committee calling it a, “Clear example of how people need to clarify their comments.”

Tim Morrison, the National Security Council's former senior director for Europe and Russia, testified earlier this month that he was told the transcript of President Trump's July 25 call with his Ukrainian counterpart was moved to a highly classified server by "mistake," according to a transcript of his closed-door meeting with lawmakers released Saturday.

During his deposition as part of the ongoing impeachment inquiry, Morrison relayed senior NSC lawyer John Eisenberg's explanation that his executive secretary mistakenly put it in the highly classified system.

Morrison acknowledged that he and Eisenberg had previously discussed that access to the transcript should be restricted but also testified that there was nothing said on the call that met the requirements to put it on a highly secure server. Morrison was among several officials who were listening to the call and reviewed the transcript.

Morrison and his team found out that the transcript was in the classified server while they were "trying to gain access to it to prepare the President for the planned Warsaw meeting," in September, according to the transcript.

Upon finding the transcript in the special server, they asked themselves, "how did it get on there?" Morrison said.

"John (Eisenberg) related that he did not ask for it to be put on there, but that the Executive Secretariat staff misunderstood his recommendation for how to restrict access," he added.

However, a former White House official told CNN that Eisenberg's deputy, Michael Ellis, delivered the directive to the NSC's Executive Secretariat and told officials there to move the call transcript to the codeword classified system, known as NICE.

The directive was quite clear at the time because officials involved in the process were "bewildered" since there was no codeword classified material in the transcript, according to the former official.

Gordon Sondland, the American envoy to the European Union, was acting at President Donald Trump's instruction in his dealings with Ukraine, and Sondland said that the President told him Ukrainian President Volodymyr Zelensky "must announce the opening of the investigations," according to the closed-door deposition of a former National Security Council official.

Former NSC official Tim Morrison testified that he had heard from Sondland that US aid to Ukraine was conditioned on the country announcing an investigation into former Vice President Joe Biden and his son Hunter Biden.

Morrison's testimony, which was released by House impeachment investigators on Saturday, adds additional corroboration to the testimony of others, like US diplomat Bill Taylor, that Sondland said he was acting at Trump's direction when he was urging Ukraine to announce political investigations.

Morrison's testimony will only fuel questions about Sondland's closed-door interview, which has been called into question based on the testimony others have given about his conversations with Trump. Sondland is scheduled to testify publicly before the House Intelligence Committee on Wednesday.

House impeachment investigators also released Saturday the transcript of Jennifer Williams, an aide to Vice President Mike Pence, who listened into the July 25 call along with Morrison. While Morrison did not take specific issue with the content of Trump's call with Zelensky, both aides described their concerns as they listened to Trump discussing political investigations.

"It was an offer of congratulations for President Zelensky's recent victory, which was an overwhelming victory in that race," Pence aide Jennifer Williams testified, according to a transcript of her closed-door deposition released on Saturday as part of the House impeachment inquiry. "They talked, again, also about the importance of the US-Ukraine relationship and how eager we were, the US was, to see President Zelensky take steps to implement the agenda on which he had run, which was very much focused on anticorruption, and looking to realIy bring Ukraine even closer to the trans-Atlantic and European community."

She said they also discussed Pence going to Zelensky's inauguration in Ukraine. When asked to her knowledge or recollection if there was any reference into investigations into Burisma, Joe or Hunter Biden, or 2016 in that call, Williams said, "There was not." There is no evidence of wrongdoing by either Biden in Ukraine.

According to the newly released testimony, Williams also provided details on Pence's September 1 meeting with Zelensky and highlighted how concerned Zelensky was about US military aid being withheld, saying it was the first question he asked Pence when the press left their bilateral meeting in Warsaw, Poland.

House Speaker Nancy Pelosi said she told President Trump that he's in her "wheelhouse" when he attacks the whistleblower, whose complaint initially prompted the House impeachment inquiry of the President.

In part of a CBS News interview released Saturday, Pelosi said: "I will make sure he does not intimidate the whistleblower. I was there. I told the President you're in my wheelhouse when you come after the whistleblower."

Trump has repeatedly attacked and tried to discredit the whistleblower, and has made false claims about the individual on Twitter and at his rallies. A lawyer for the whistleblower sent a letter to the White House warning the President to "cease and desist" attacking his client.

Pelosi said: "This is really important, especially when it comes to intelligence, that someone who would be courageous enough to point out truth to power and then through the filter of a Trump appointed inspector general who found it of urgent concern and ... then took it to the next steps."

Pelosi said Trump has "every opportunity to present his case" before Congress, and could "take the oath of office or he could do it in writing."

A senior career official at the Office of Management and Budget testified on Saturday about a budget process that went off the rails when nearly $400 million in US military aid to Ukraine was withheld earlier this year, and that he did not know for sure the reasoning behind the freeze in funds, sources familiar with his testimony told CNN.

Mark Sandy arrived on Capitol Hill Saturday for a more than five-hour closed-door deposition in the House impeachment inquiry into President Trump.

He spoke about how unusual of a process it was that a political appointee came in, took over the apportionment process and placed a hold on the military aid, a source told CNN.

CNN previously reported that Michael Duffey, the OMB's associate director for national security programs and a Trump political appointee, signed at least some of the documents delaying aid to Ukraine, according to two sources. Normally a career budget official signs such documents.

More on the aid: This past summer, the Trump administration took the unusual step of freezing nearly $400 million in aid to Ukraine -- intended in part to help the country counter Russian aggression -- before the President's July 25 phone call with Ukrainian President Volodymyr Zelensky. The administration eventually released the military aid in September after congressional Republicans raised concerns and the White House was made aware of a whistleblower complaint about the July call.