According to one top congressional GOP source, several hill GOP lawmakers were more “shaken” by David Holmes’ testimony than they publicly let on.

Behind closed doors, many expressed frustration that Gordon Sondland would place a call to the President in a public restaurant, and are concerned that Holmes’ testimony was the most convincing argument for President Trump’s direct involvement in the campaign to pressure Ukraine.

Holmes’ testimony is also making some GOP members worry about how far Ambassador Gordon Sondland will go in his public testimony Wednesday.

Two senior Republican sources say that some House Republicans are also worried about how Sondland will handle himself at Wednesday’s hearing. The sources point out that Sondland is not an accomplished diplomat and one source adds he believes Sondland was unprepared and ill fitted for the job as US Ambassador to the European Union.

House Republicans are also increasingly worried about the political fallout from the hearings overall and the impact of multiple witnesses who are career professionals.

They are especially concerned about the reaction from independent voters and suburban women voters who are watching Trump attack witnesses both on Twitter and on television.

Ambassador David Hale told House investigators he was not aware of what was being pursued in Ukraine and said he was surprised when he learned about it in the wake of the Trump-Zelensky call transcript release.

“I mean, during that period, it wasn't just the phone call, but then the information that was revealed about the conduct, what people were pursuing, were allegedly pursuing with Ukrainian officials, it did surprise me. I didn't know any of that was happening,” he said.

Later in his testimony, Hale said he did not become aware of former special envoy Kurt Volker was communicating with Rudy Giuliani until they became public in the media.

“I found out about it when all of this emerged from the whistleblower and the subsequent stuff that went into the media out of the investigation and whatnot,” Hale said.

“And when did you first learn that Ambassador Volker had introduced Rudy Giuliani to Mr. Yermak?” he was asked.

“Again, when this all came out in the media,” Hale replied.

Ambassador David Hale testified that it took him two days to find out who held up the aid to Ukraine, and was simply told at first that there was a “presidential directive.”

Hale told investigators that there were “several emails” that he received after a lower level interagency meeting on July 23.

“I was being told that the aid -- that there's a presidential directive,” he said. “I reacted to that and said: Who is saying this? That a lower level aid cannot just stop assistance based on say-so.”

He said he didn’t believe that anyone at that meeting had the authority to hold up the aid. “I was not satisfied that someone just saying there was a Presidential directive actually even meant that the President had done this.” 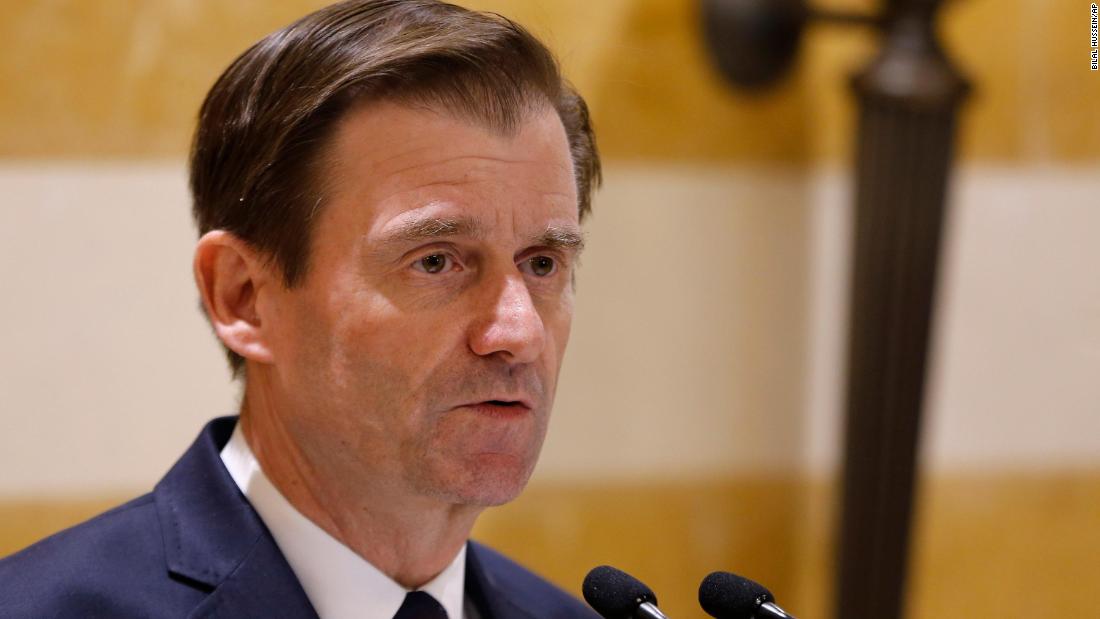 Amb. David Hale testified that he had advocated for “a statement of support for Ambassador Yovanovitch so she could stay there and continue to do the good work that she was doing.”

“I'm certainly aware that, in the absence of such a statement, that people might draw various conclusions,” he said.

Asked whether he shared McKinley’s concerns that the absence of a statement would impact morale, Hale said, “Yes, of course.”

“And, indeed, in terms of the other personnel at the mission in the Embassy in Ukraine, did it concern you what it would do to the morale of people in the diplomatic corps in Ukraine, our employees seeing how she was treated?” he was asked.

“I had many concerns, which is why I was advocating for a strong statement of support for her. I wanted to be sure that she could continue to be as an effective ambassador as she could be. I was also concerned about the effect that it would have on the moral (sic) of our people wherever they may be.” 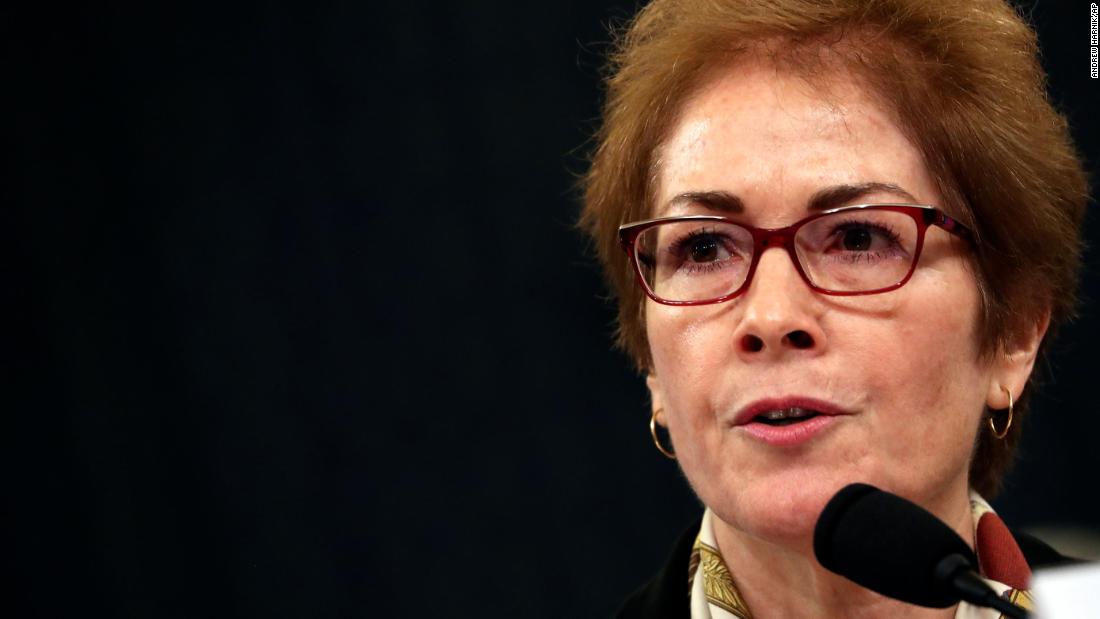 Ambassador David Hale told lawmakers that President Donald Trump’s comment that Ambassador Marie Yovanovitch was “going to go through some things” concerned him.

“It concerned me. I was not aware that was anything that was happening in consequence of that,” he told House investigators. “That was not an operational comment that had been operationalized in any way.”

“It hadn't been operationalized in terms of anything through the State Department, correct?” Committee Chairman Adam Schiff asked him.

“Had the President said that Ambassador Hale is going to go through some things, I take it that would have alarmed you?” Shiff asked.
“Of course,” Hale said.

Hale said he wasn’t aware of that part of the call until it was made public.

Previous CNN reporting: Yovanovitch, who testified that she had been removed from her post after a "campaign of disinformation" from the President's personal attorney Rudy Giuliani, told lawmakers last Friday that she felt threatened when she learned that Trump had said on his July 25 call with Ukrainian President Volodymyr Zelensky that she was "going to go through some things."

"I was shocked and devastated that I would feature in a phone call between two heads of state, in such a manner where President Trump said that I was 'bad news' to another world leader and that I would be going through some things," Yovanovitch said. "It was a terrible moment."

“I had a conversation with the Secretary of State about it, and I mentioned to him that Mike (McKinley) seemed to me to be worked into a very negative state of mind, based on one of the meetings I had and the one in which he said that he had submitted his resignation,” Hale said. “And I said that it could be creating a problem -- for the morale of everyone -- you know, all those around him.”

Ambassador David Hale said he first started to hear that the withholding of aid to Ukraine could be a possibility on June 21.

With Lebanon’s aid also being held, Hale said, some State Department employees started to speculate whether this was “a new normal on assistance.”

Hale said he was briefed on a lower-level interagency meeting “in which (the Office of Management and Budget) said that the Ukraine assistance was suspended.”

On July 26, Hale said he attended a meeting with all the deputies of foreign affairs agencies that had concerns about the Ukraine aid, which was chaired by Deputy National Security Adviser Charles Kupperman.

The only individual opposing the continuation of Ukraine aid during the meeting was OMB. The OMB representative was asked why they opposed the aid, and “they said that they had guidance from the President and from acting Chief of Staff Mulvaney to freeze the assistance.”

Hale subsequently sent a note to Pompeo saying OMB likely would not budge on the issue and it would have to be heard at a principals level.

Asked if the State Department took action to deal with the aid potentially not being released, Hale said:

“I received some emails on the assistance freeze on the 25th of July. I believe it was just confirming that the freeze existed. I don’t remember discussion about going so far as reprogramming. Obviously, that was the implication.”

Hale said he learned about the aid release on September 11, when it was made public.

Asked if he was surprised that the aid was eventually released, Hale said: “I was relieved that it was released.”

He was asked: Within the State Department, as far as you knew... was there -- were you informed or were you notified or were you provided any factual basis to support the allegations related to the Biden-Burisma allegations and the Ukrainian interference in the 2016 election?"

He answered: "No. I never saw any evidence of that. And I do want to emphasize that I did not focus on that aspect of things."