Inspector general report on Russia investigation is out 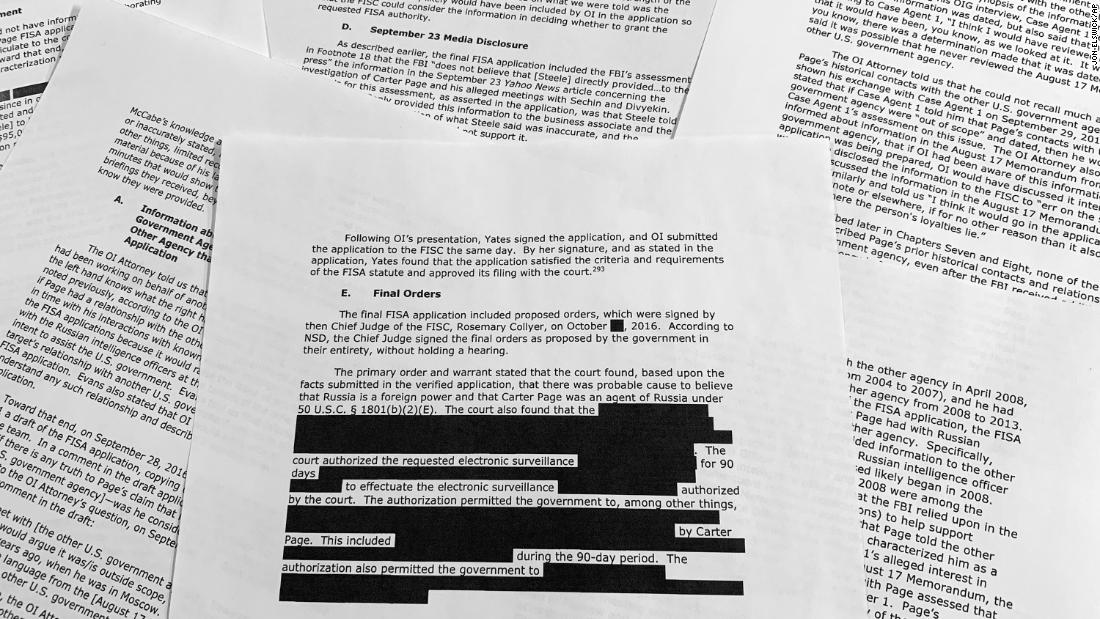 The Justice Department's inspector general released a much anticipated report on the FBI's Russia probe today.

The inspector general found that the probe was legally justified and unbiased. But the report also cites significant errors in surveillance warrants.

Here are some of the key takeaways

In all, a review of the Foreign Intelligence Surveillance Act prompted one criminal referral — one into the lower-level FBI lawyer who altered a document in the Carter Page application process.

But the inspector general's report also referred for possible disciplinary action Bruce Ohr and the entire chain of command in the FBI that worked on the Page investigation.

Ohr is a Justice Department employee, so the inspector general referred his behavior to the department’s Office of Professional Responsibility.

The inspector general also asked the FBI to review the performance of “all employees” who worked on the Page FISA application process “as well as the managers, supervisors, and senior officials in the chain of command of the Carter Page investigation.”

The chain of command starts at the top with then-FBI Director James Comey and the inspector general's recommendations appear to include more than a dozen FBI officials. From the time the FBI began their Russia investigation and until it was handed off to special counsel Robert Mueller, three different teams of agents and analysts worked the broader investigation.

The FBI responded to the inspector general that it would review the FBI employees and take “actions as appropriate.” The FBI noted many of its employees who worked on the Page investigation are no longer with the agency. 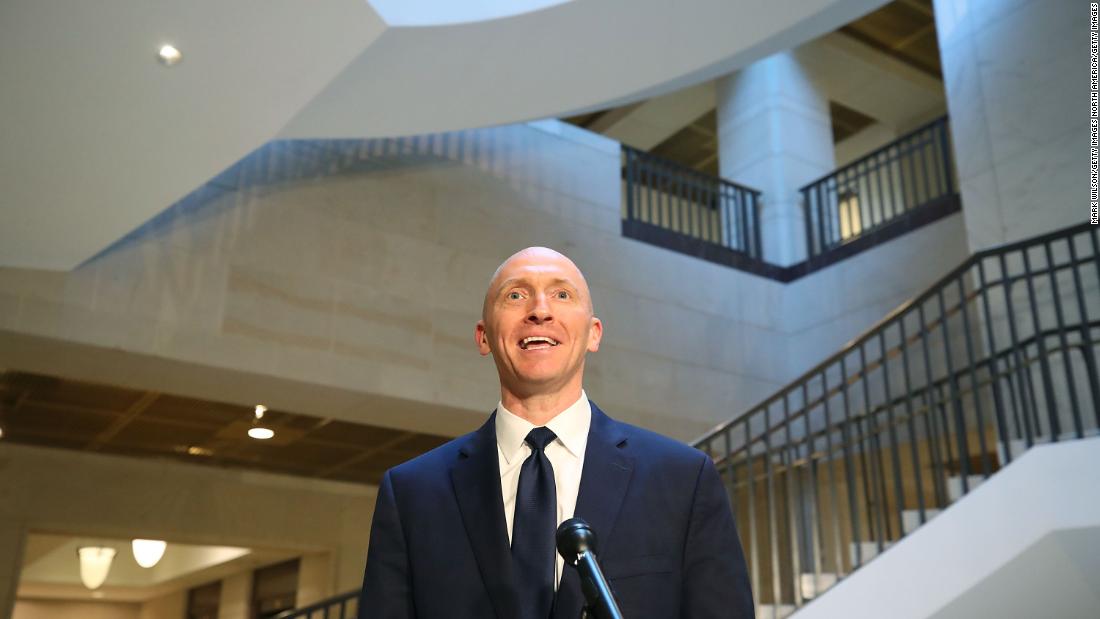 While preparing the Foreign Intelligence Surveillance Act (or FISA) application, the FBI cherry-picked information it gleaned from a conversation that one of its informants had with former Trump campaign adviser Carter Page in October 2016, according to the inspector general report.

Speaking with an FBI informant, Page boasted that he could probably get “an open checkbook” from the Russians to fund a think tank or research institute that he was thinking about launching.

Here's how that exchange went down:

"I don't want to say there'd be an open checkbook, but the Russians would definitely…” Page said.
"They would fund it — yeah you could do alright there,” the FBI informant interjected.
Page replied, “Yeah, but that has its pros and cons, right?”

The FBI later used that information in the application for a FISA, arguing that there was probable cause to suspect he was working as a Russian agent. That application was approved by the secretive FISA court.

But in that application, investigators didn’t include other parts of Page’s conversation with the informant where he denied key allegations from the dossier. For example, he told the informant that he never met with two senior Russian officials during his July 2016 visit to Moscow. This critical information was not shared with the entire chain-of-command, and it was not mentioned in the FISA application.

In fact, the first FISA application incorrectly stated that Page didn’t provide the FBI informant with “specific details to refute, dispel or clarify” media reporting about his alleged meetings with Russian officials. (By that time, some of Christopher Steele’s information had spilled out into public news reports.)

Not all of the FBI agents who were texting about politics were dismayed by President Trump’s election win, according to the Justice Department inspector general report released today.

One FBI agent — who was responsible for handling an FBI source that had a limited and indirect relation to the FBI Russia probe — messaged another FBI agent that he “was so elated with the election."

He also compared the coverage to “watching a Superbowl comeback.” 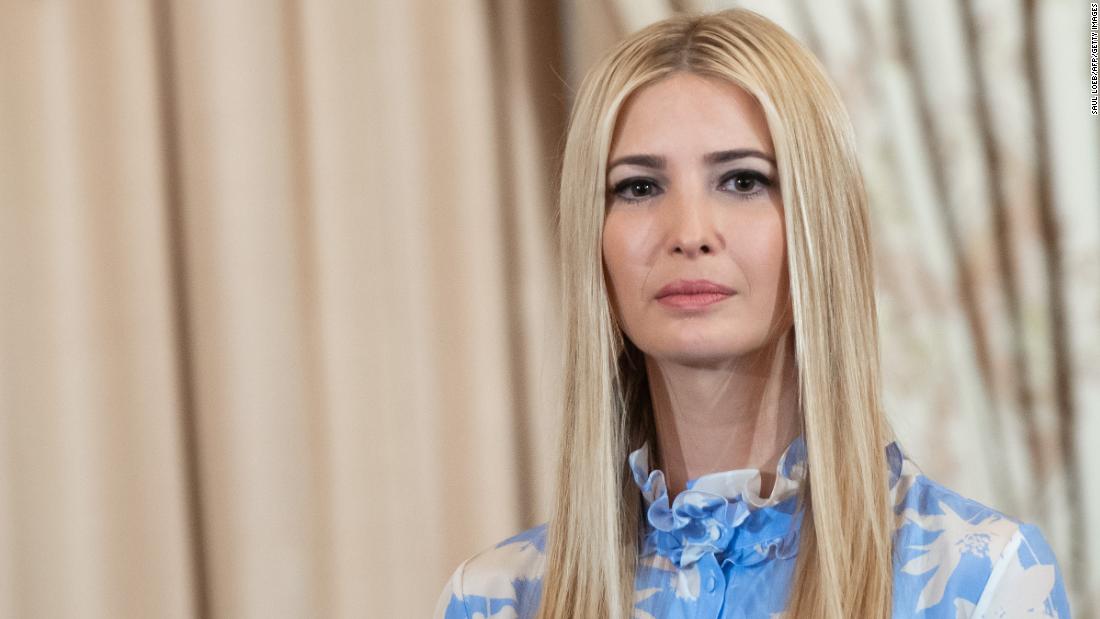 Christopher Steele told investigators that it was "ridiculous" that he was biased against Trump, saying he had "been friendly" with a member of Trump's family for years, according to the IG's report.

The name is redacted from the report — but a source close to Steele's corporate intelligence agency called Orbis confirms the family member is Ivanka Trump.

According to the report, Steele said, "If anything he was 'favorably disposed' toward the Trump family before he began his research because he had visited a Trump family member at Trump Tower and 'been friendly' with [the family member] for some years."

He told investigators their relationship was "personal" and said he had once given that person a Scottish family tartan.

ABC first reported Steele's connection to Ivanka. CNN has reached out to representatives for Ivanka Trump for comment.

The Justice Department inspector general's office found that the FBI did not try to recruit members of the Trump campaign as informants, and did not to try infiltrate the campaign itself — either by instructing sources to get hired onto the campaign, or by sending sources into campaign spaces to collect information.

One early source that proved helpful to the FBI had actually been offered a position on the Trump campaign by former Trump campaign adviser Carter Page, but the FBI was not aware of that when they approached the source, and the source never took the campaign job.

In fact, FBI officials involved in the investigation were unanimous in their belief that they would not use the source if the source had wanted to take a role on the campaign, according to the report.

"No, no, no, no, no, no .... [O]h god no. Absolutely not," was former FBI agent Peter Strzok’s reaction to the news that the source had a job offer pending, the former senior counterintelligence agent told the IG’s office.

The source eventually met with Page, former Trump campaign adviser George Papadopoulos, and a high-level campaign official who was not a subject of the investigation, on behalf of the FBI.

Part of the source’s conversation with Page, in which Page responded cryptically when asked about a potential “October surprise,” eventually made its way into one of the renewal applications for Foreign Intelligence Surveillance Act surveillance.

In another meeting with the source, Page joked that he’d like have an “open checkbook” from the Russians if he were to follow through with a plan to found a think tank in line with his friendly views on the country. That line too made it into the FISA applications, and caused some in the FBI to believe that Page could be acting as a Russian agent.

The supervising agent overseeing the FBI's Russia investigation attended a counter intelligence briefing the Office of the Director of National Intelligence provided to the Trump campaign, at least in part, to collect information relevant to their investigation, according to the inspector general Michael Horowitz's report.

Horowitz wrote that he found no evidence that the FBI consulted with Justice Department leadership or DNI officials about the decision to send an investigator to the briefing.

About one week after the briefing, the supervising agent — after consulting with Peter Strzok and an FBI lawyer — formally documented the briefing in a three-page memo that described questions the agent fielded from Trump and former national security adviser Michael Flynn, comments both men made, and how the agent responded. The FBI agent said they only documented information potentially relevant to Crossfire Hurricane.

The same agent also provided the same briefing for the Hillary Clinton campaign, telling Horowitz that they did nothing differently between the Trump and Clinton briefings. The report quotes the supervising agent as saying:

"That was one of the things that was very key. [The briefings] needed to be consistent."

However, the agent only wrote a memo about the briefing that was provided to the Trump campaign.

Keep in mind: The IG wrote that there are no FBI policies that detail how such briefings should be handled and whether it's appropriate to use them for any possible investigative threads.

In the conclusion of the report, the Inspector General recommends that the FBI establish a policy regarding whether it's appropriate for investigators to use defensive or transition briefings and that any such step should require approval by senior leaders at the FBI with "notice to a senior Department official."

Christopher Steele was an FBI source from 2013 until 2016, when the FBI cut ties after seeing that some of his information about Trump was popping up in press reports, according to the report that was released today.

“During his time as an FBI (confidential human source), Steele received a total of $95,000 from the FBI,” the report said.

The inspector general says “Steele was not compensated by the FBI” for the election-related information that is mentioned in the IG report.

Meanwhile, the report also describes how the FBI paid George Papadopoulos $3,000 for a “project” in September of 2016 in an operation that investigators hoped would produce new insight into the Trump foreign policy aide’s awareness of the Russian plots.

As part of the operation, which was approved by a senior counterintelligence official at the agency, the FBI had a source fly Papadopoulos internationally and assign him a paper focusing on the eastern Mediterranean, as well as the energy sector and the relations between Russia and Israel.

In meetings over brunch and pre-dinner drinks to discuss the project, which was designed to be unrelated to Papadopoulos’s role on the Trump campaign, the source pressed Papadopoulos about WikiLeaks

Papadopoulos on more than one occasion replied claiming ignorance about the group’s plans to release damaging information on Hillary Clinton. He also told the source that the campaign didn’t advocate for help from WikiLeaks or the Russians because it was “illegal” and “compromises the US national security,” according to the report.

FBI officials said at the time and reiterated later to the IG that the answer sounded “canned” and “like a lawyer wrote it.”

The Justice Department inspector general's report paints a more thorough picture on what the FBI found when it tried to verify information in Christopher Steele's dossier on President Trump and Russia — including attempts to verify the existence of video tapes of "alleged unorthodox sexual activity."

Steele's primary source for information in the dossier, for instance, told the FBI he or she may have talked about Trump's alleged sexual activities in "jest" and couldn't confirm whether the tape was real, the report states, quoting the source.

"The Primary Sub-source explained that he/she reported to Steele that Trump's alleged unorthodox sexual activity at the Ritz Carlton hotel was 'rumor and speculation' and that he/she had not been able to confirm the story," the report states.

Many of the claims by Steele, a former British spy, have held up over time, or have proven to be at least partially true, including the fact that there was a concerted Russian operation to attacking the 2016 election. The Justice Department has brought criminal charges against dozens of Russian hackers and online trolls for allegedly interfering with the election.

Steele's dossier had also asserted that Trump could be vulnerable to Russian blackmail, among other things. The salacious allegations in Steele's memos remain unproven, nearly three years after the memos went public — a point which the inspector general's report on Monday underlines.