To see updated results from the 2020 Iowa caucuses, click here.

Iowa Democratic Party Chair Troy Price told the presidential campaigns this morning that they plan to “release the majority of results that we have by 4 p.m. today,” according to a source on the call. That is 5 p.m. ET.

The call is ongoing.

Bill Brauch’s Apple ID eventually did him in.

Brauch, the caucus chair for precinct 59, a 511-person site in Des Moines, downloaded the Iowa Democratic Party’s app last week, tested it and believed it was working fine.

But on the night of the caucus, about 30 minutes before counting began, Brauch tested it again and a “glitch” made it so that only the left side of his iPad keyboard popped up, meaning he could only type numbers and letters on the left. That, obviously, made it impossible to use.

Brauch called the Democratic Party hotline and was told to change the settings and “unload the app and then reload it.”

“That required me to access my Apple password, which I did not have with me, so at that point that app wasn’t on my iPad,” he said with a slight laugh, meaning when people began caucusing at his site, they had no app to use.

Brauch then turned to the traditional way – over the phone – but was initially put on hold for 15 minutes before hanging up.

He then opted to use a backchannel he had to the Iowa Democratic Party’s boiler room. His caucus secretary knew someone in the room, so she called the person and they reported the data that way – via a backchannel, not on the official hotline.

“We were lucky that we had that inside person,” he said. “We had unique access because of that relationship.”

“The whole thing is disappointing to me,” he said. “The caucus itself ran smoothly, the new slightly revised rules and the presidential preference cards were not a problem, we found a way to do it in a way that was organized. And people had a good experience at the caucus.”

Democratic presidential candidate Elizabeth Warren said she was "feeling good" despite the confusion surrounding the results from Monday's Iowa caucuses.

Speaking at a town hall in New Hampshire today, Warren told her supporters, "So we're back from Iowa. Wow. But here's what we know it's a tight, three way race at the top. We know that the three of us will be dividing up most of the delegates coming out of Iowa. I'm feeling good."

She added: "I mean, we had a bumpy start to the democratic process yesterday in Iowa tonight. Donald Trump gives State of the Union. And tomorrow, it appears that Republicans will continue to lock arms to protect an out of control president. Yes, and will prove their loyalty to the person, rather than to the Constitution of the United States. These are hard times for our country. The question is, so what are we going to do what we can be discouraged."

Cindy Garlock served as caucus chair of precinct 18, one of about 80 precincts in Iowa’s Linn County. She told CNN that she did use the app to file her numbers last night.

“It appeared to work. It said that our results had been sent,” Garlock said. “We had just a brief moment (when it didn’t work), but I think it was our error, that we put in the data incorrectly and when we fixed that, it worked fine.”

She continued: “You push send and you hope that it all gets there accurately.”

Garlock laughed at the fact that she had an experience on Monday night dramatically different to her friends at other caucus sites.

“We are just all waiting like you guys are,” she said, adding that she has not talked to anyone at the state party.

Her precinct was a four-way tie, she said, between Bernie Sanders, Elizabeth Warren, Pete Buttigieg and Amy Klobuchar.

“Honestly, it went really well,” she said. “I was very pleased. We had a lot of good volunteers, everyone in the audience was very cooperative and they listened to directions very well.”

Iowa State Senator Pam Jochum, who chaired precinct 14 in Dubuque, told CNN that while her caucus ran relatively smoothly last night, she never attempted to use the app because she could not download it and could not get support from the party to resolve issues with the app up to a week before the caucuses.

"I could not download the app, even," Jochum said. "Even before the caucus started, I knew I was going to be calling the numbers in."

Her precinct finished their second alignment by 8:30 p.m., and she was able to successfully call the numbers in.

But she said over a week before the caucus, she attempted to reach out to the state party for assistance with the app but did not receive any. The system that was used to allow precinct chairs to download the app wouldn't accept her password. After several tries, she said that the link to download the app eventually expired and she knew she would be using the old system of calling in results.

"I went to the state party and they were all too busy to even help me with it," Jochum said. 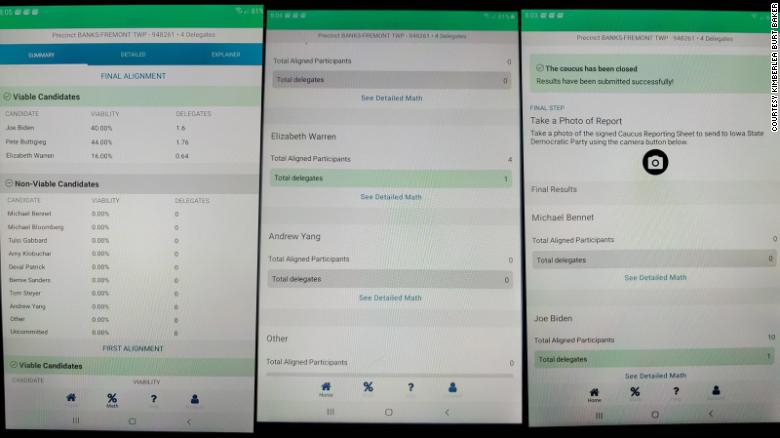 And here are recent updates to the app: 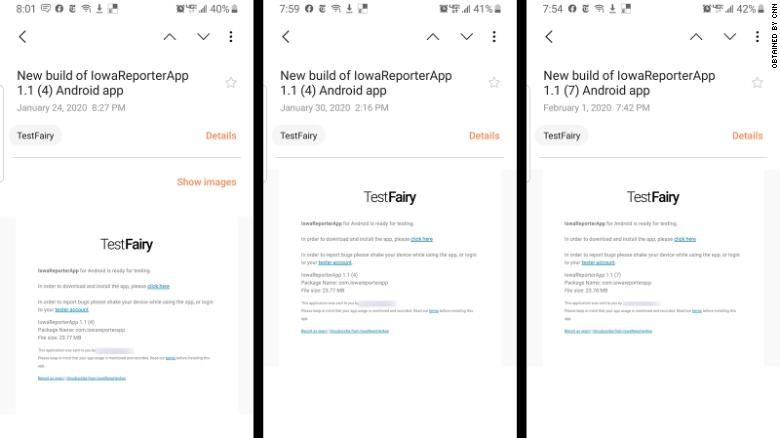 Acting Homeland Security Secretary Chad Wolf said in a Fox interview this morning that the department's cyber agency offered to test the Iowa caucus counting app, but the offer was declined.

He also said that "no one hacked into it" and they don't see "malicious cyber activity going on."

“Our cybersecurity and infrastructure security agency has offered to test that app from a hacking perspective. They declined and so we’re seeing a couple of issues with it,” Wolf said. “I would say right now, we don’t see any malicious cyber activity going on.”

DHS continues to talk to the state players and throughout yesterday had done multiple check-ins.

But they are quite hands off when it comes to this, repeatedly referring back to the state players on the ground. DHS is very careful and delicate when it comes to working with the states because they don’t want to be seen as interfering. That said, they push all sorts of training, advice, technology and are constantly talking up the lines of communication they’ve established with the states. They are also huge proponents of states using paper ballots.

“This is more of a stress or a load issue, as well as a reporting issue that we’re seeing in Iowa. But what I would say is that given the amount of scrutiny that we have on election security these days, this is a concerning event and it really goes to the public confidence of our elections,” Wolf told Fox.

One thing to note: States will often decline DHS’s services and do it instead with local or private entities.

Despite a new, wider rollout of a mobile app to transmit caucus results, local party officials in Iowa say the mobile app was not part of any caucus chair training.

Linda Nelson, a Democratic caucus chair in Pottawattamie County, tells CNN that precinct chairs did not receive training because the app wasn’t ready.

Zach Simons, the party chair in Wapello county, told The New York Times: “The app wasn’t included in the chair training that everyone was required to take.”

In Des Moines, Polk County Democratic Chairman Sean Bagniewski told CNN that app problems actually surfaced last week during testing. When some precinct chairs reported trouble last Thursday, Bagniewski told those who couldn’t get the app to work to call in their results to the Iowa Democratic Party as they had in previous years.

“When you have an app that you’re sending out to 1,700 people and many of them might be newer to apps and that kind of stuff, it might have been worth doing a couple months’ worth of testing,” Bagniewski told The New York Times.

However, last week, a state party official told CNN's Dianne Gallagher: "The IDP has been training caucus leaders on heightened security measures and is holding regular app trainings with caucus leaders in the weeks leading up to caucus night."

CNN has reached out to the Iowa Democratic Party for a response on the precinct chairs' concerns today and has not received a response.

A Democratic source tells CNN that the issue seems to lie with a major coding error in the app that was discovered once data started flowing into the IDP and party officials began to see discrepancies in the three data streams as the results started coming.

The source said it took time for party officials to identify and address the issue and noted there was not a problem with the raw data being put in by the individual precincts.

The national party is trying to help Iowa resolve it.