Our live coverage has ended, but you can keep reading about today's ceremony here.

President Trump said he won't pay his respects to Rep. John Lewis as he lies in state at the US Capitol.

"No I won’t be going, no," Trump said when asked whether he would travel either later Monday or Tuesday to honor the late congressman and civil rights icon.

Earlier Monday, the White House said Vice President Mike Pence and his wife Karen would pay their respects to Lewis on Monday evening at the Capitol building.

Trump offered brief words on condolence on Twitter after Lewis' passing last weekend and ordered flags lowered for a day.

While waiting to retrieve the casket of Rep. John Lewis, one of the military pallbearers — in Navy dress whites — fainted.

They had been standing at attention on the East Front Plaza for nearly an hour.

It is currently 94 degrees in Washington, according to the National Weather Service.

The casket of the late Rep. John Lewis is being carried up the Capitol steps by a group of service members.

Once inside the Capitol's Rotunda, there will be a small invite-only ceremony to honor the civil rights icon's life and legacy.

Later today, members of the public will be able to view Lewis' casket as he lies in state.

Members of Congress were wearing masks and sitting apart from each other ahead of a ceremony to honor the life of Rep. John Lewis.

Some lawmakers donned makes with the words "Good Trouble" — a phrase that Lewis often repeated to counsel people on the need for "good trouble, necessary trouble." 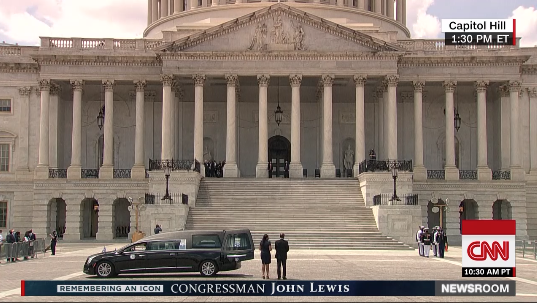 Rep. John Lewis’ motorcade has arrived at the Capitol, where an invitation-only arrival ceremony is beginning shortly.

Lewis' body will lie in state and a public viewing will take place outdoors as a precaution due to the coronavirus pandemic.

Earlier, the procession paused at the rear entrance to the Supreme Court.

“Equal justice under law” is engraved above the front entrance of the building.

Rep. John Lewis’ motorcade has driven past the Robert F. Kennedy Department of Justice Building on its way to the US Capitol.

Lewis worked on Kennedy’s presidential campaign and later introduced legislation that authorized the renaming of the DOJ building for Robert Kennedy.

The motorcade also drove past the National Council of Negro Women.

Rep. John Lewis’ motorcade just passed by the Smithsonian’s National Museum of African American History and Culture on its way to the US Capitol.

“The Smithsonian’s National Museum of African American History and Culture, particularly remembers Congressman Lewis as co-author and sponsor of the legislation that created the museum,” Spencer Crew, interim director of the museum, said in a statement on the congressman’s passing. “In a grand display of tenacity, he plowed through harsh criticism and submitted the bill for discussion every year for 15 consecutive years before it was passed by Congress and signed into law by President George W. Bush in 2003.”

Lewis' motorcade is making its way to the Capitol for a ceremony.

The mural was pained in June. Lewis visited it at the time, and called it "a powerful work of art." 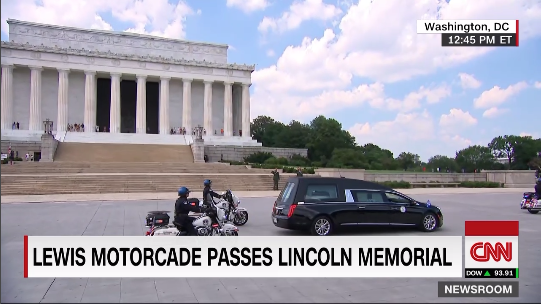 A motorcade carrying Rep. John Lewis' body briefly stopped at the Rev. Martin Luther King, Jr. Memorial and the Lincoln Memorial on its way to the US Capitol.

King, a friend and mentor to Lewis, worked alongside the late congressman during the civil rights movements in 1960s.

In 2014 Lewis described hearing King speaking about Rosa Parks over the radio.

"It seemed like Martin Luther King Jr. was speaking directly to me, saying John Lewis, you too can do something. You can make a contribution," Lewis said.

After stopping briefly at the MLK memorial, Lewis' motorcade stopped by the Lincoln Memorial.

At the age of 23 Lewis was a keynote speaker at the historic 1963 March on Washington in front of the Lincoln Memorial. He was the last living speaker from that event.

"We do not want our freedom gradually; we want to be free now," Lewis said at the time.