“We're summoned here because in a moment when there are some in high office who are much better at division than vision, who cannot lead us so they speak to divide us, in a moment when there is so much political cynicism and narcissism that masquerades as pate time here lies a true American patriot who risked his life and limb for the hope and the promise of democracy," the pastor said.

Warnock urged attendees and the country to keep "fighting together" and "voting together."

"We celebrate John Lewis. He was wounded for America's transgressions. Bruised for our inequities, and the chastisement of his peace was upon him, and by his stripes we are healed, so let's remember him today, and let's recommit tomorrow for standing together and fighting together and voting together and standing up on behalf of truth and righteousness together! We'll get through this together," Warnock said.

"Let's save the soul of our democracy together, and let's worship the lord," he added.

Civil rights titan: At age 25, Lewis helped lead a march for voting rights on the Edmund Pettus Bridge in Selma, Alabama, where he and other marchers were met by heavily armed state and local police who attacked them with clubs, fracturing Lewis' skull.

Images from that "Bloody Sunday" shocked the nation and galvanized support for the Voting Rights Act of 1965, signed into law by President Lyndon B. Johnson.

Funeral attendees began arriving around 10 a.m. ET. Many approached the casket and paid their respects.

The morning began with an honor guard transferring the body of the congressman from the Georgia State Capitol where he was lying in state to a hearse. As the vehicle left the capitol, family and friends walked slowly behind waving and a motorcade brought Lewis to the church.

The service will be followed by Lewis' interment at South-View Cemetery just south of downtown Atlanta.

Ahead of John Lewis' funeral, church bells across the country rang their bells at 11 a.m. ET to pay tribute to the civil rights icon.

The churches rang their bells for 80 seconds, in honor of the 80 years of Lewis’ life.

More than 500 churches around the country were expected to be ringing their bells, according to a family spokesperson, including St. John’s Episcopal Church in Washington, DC.

Ebenezer Baptist Church, the Atlanta church where Lewis' funeral is being held, does not have a bell. Instead, the church observed an 80-second moment of silence

The “celebration of life” funeral service for the civil rights icon will begin at 11 a.m. ET.

Lewis’ funeral will be held this morning at the historic church where the Rev. Martin Luther King Jr. served as a co-pastor from 1960 until his assassination in 1968.

Here's a look inside the church: 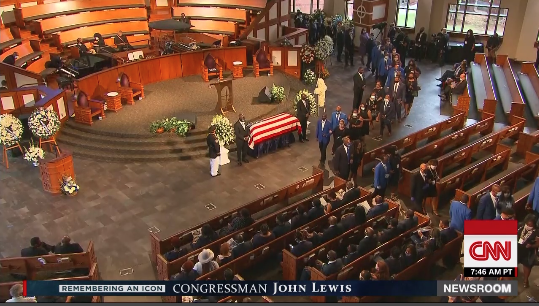 The late Rep. John Lewis called for Americans to "answer the highest calling of your heart and stand up for what you truly believe" in an essay published by The New York Times on the day of his funeral.

The late congressman's words were sent to the newspaper two days before his death to be published Thursday, the day of his funeral.

Lewis, a mantle of the civil rights movement, said he was inspired in his last days by social justice reform and activism that has swept the county in the aftermath of police killings of Black Americans.

"You filled me with hope about the next chapter of the great American story when you used your power to make a difference in our society," he wrote. "Millions of people motivated simply by human compassion laid down the burdens of division. Around the country and the world you set aside race, class, age, language and nationality to demand respect for human dignity."

Lewis continued, "Emmett Till was my George Floyd. He was my Rayshard Brooks, Sandra Bland and Breonna Taylor," adding he was 15 years old at the time of Till's brutal death.

"I will never ever forget the moment when it became so clear that he could easily have been me. In those days, fear constrained us like an imaginary prison, and troubling thoughts of potential brutality committed for no understandable reason were the bars," he wrote.

Listen to the essay:

Rep. Lewis’ funeral will be held this morning at the historic Ebenezer Baptist Church in Atlanta, where the Rev. Martin Luther King Jr. served as a co-pastor from 1960 until his assassination in 1968.

Lewis, the son of sharecroppers, survived a brutal beating by police during a landmark 1965 march in Selma, Alabama. He ultimately became a towering figure of the civil rights movement and a longtime US congressman.

After the service, Lewis will be interred at South-View Cemetery.

There have been memorial events celebrating Lewis' life and legacy all week. Over the weekend, services were held in Troy, Alabama, his hometown. His body also traveled across Selma's Edmund Pettus Bridge, where he helped lead the 1965 march for voting rights.

On Monday, Lewis' body was taken to Washington, DC, where lawmakers paid their final respects. He became the first Black lawmaker to lie in state at the US Capitol Rotunda.