Trump was having his doubts about Alex Acosta, and people close to Trump questioned how long the labor secretary would last.

The President went from praising him and urging him to defend himself, to privately questioning why the victims had not been notified about the plea deal.

Just two days ago, Acosta staunchly defended his relationship with President Trump, who encouraged him to speak with reporters about his role in the Epstein matter amid calls for his resignation. Afterward, officials said Trump remained supportive of his labor secretary. 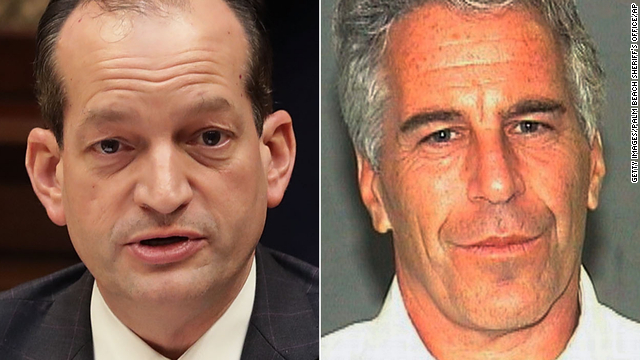 Labor Secretary Alex Acosta's resignation comes amid renewed fury over his handling of a plea deal with millionaire Jeffrey Epstein.

Here's what you need to know about the deal: In November, the Miami Herald reported that when Acosta was a US attorney in Florida, he gave Epstein the "deal of a lifetime." In a sweeping review of the politically connected billionaire's case, the Herald explained how Acosta had made an agreement with Epstein to avoid major repercussions for the hedge fund manager, even though a federal investigation had identified 36 underage victims.

The report said Acosta had brokered a deal with one of Epstein's attorneys, where he pleaded in 2008 to two state prostitution charges, ultimately serving only 13 months and avoiding a federal trial. He also registered as a sex offender and paid restitution to the victims identified by the FBI.

The agreement, the Herald said, "essentially shut down an ongoing FBI probe" and further granted immunity to "any potential co-conspirators" in the case.

Why is this coming up now? Epstein has been indicted earlier this week on new charges related to alleged sex crimes involving minors

Initially Acosta defended the deal: On Wednesday, Acosta maintained he secured the best deal he could when he helped prosecute financier Jeffrey Epstein for sex crimes a decade ago, but acknowledged the terms look lenient with the passage of time.

President Trump has announced that Labor Secretary Acosta has resigned.

Standing on the South Lawn with Trump ahead of the President's departure to Wisconsin, Labor Secretary Acosta said he “called the President this morning thought right thing was to step aside.”

His resignation is effective one week from today.